As per usual with the Style Savvy games, it’ll usually be a more video-based playthrough than a blogging one with most things I’ll update with centered to the Info page. It’s not so much that I don’t take too many pictures as much as I just don’t always have a lot to say.

It was a long wait until noon for the game to properly distribute though. It was my first time preloading a game (as I… really do not like downloading games digitally) and I expected it to be up at midnight as usually games only come out at noon on Thursday, but nooope. Regardless, I’ve had a lot of fun each time I’ve played it.

I’m hoping the make-up place will unlock soon as I’m assuming that’s when you’ll have other eye color options. While the color unlocking was fun in Fashion Forward, I definitely prefer having them all available from the start. I really hope I can unlock more customization features soon too–I know they showed a lot of different shop and room layouts in the trailers so I’m sure something will come along eventually. Just need to unlock it.

I really adore the songs in the game and honestly, I don’t really miss the fashion shows at all and much prefer the music stuff. I had fun sometimes with the fashion shows (Plus, it was a great way to get out specific types of stock), but I found it way too repetitive and I didn’t like how it was constantly forced upon you.

Translating-wise, it’s once again the PAL region port so those same fashion terms appear and thus, I always find myself constantly double-checking everything to make sure I don’t misinterpret something. Ignoring that, I’m mostly okay with most changes–the only big things that I think still bother me otherwise are the choice of Yolanda for Tsukiko (Yes, her last name being Artemisia still has ties to the moon, but it’s not what she’s referencing and considering the whole thing is doing this for herself and not her family, it makes the whole point of going with Lady Moon even weaker with the name choice they picked for her) and Rosie’s voice. I love Rosie’s songs and don’t think they’re bad or anything, but from the beginning I felt her voice surprising from her appearance/personality and it’s the only one that feels vastly different from the Japanese voice used. I really think they should’ve used a higher pitched singer to be closer to the original.

Anyway, going onto my own playthrough, I’ve been having fun and did my best to make my character the same as the Demo: 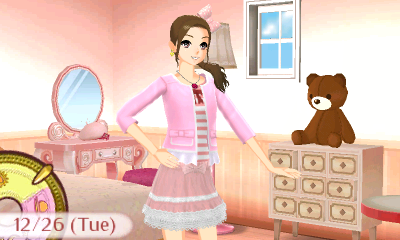 And the Cafe is also really cute: 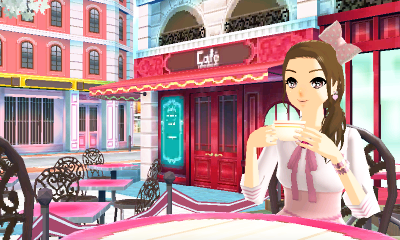 I haven’t been too fond of any of the gift outfits from the brands this time though. Babydoll is probably my favorite, even if not really my color scheme:

Regardless, I did eventually get the salon unlocked–I’m still hoping for better ponytails, but it’s something for now at least: 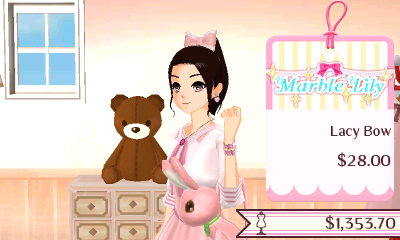 And I got a couple more brands unlocked:

Speaking of slow, but steady progress… that is my biggest issue with the game at the moment. The game works on its own timer–I haven’t measured out the specifics, but after a certain amount of time (or certain events), the day will end even if you didn’t go to sleep. I hate this. A lot. I wish they just made it so at a certain time, less to no people show up eventually turning to none after a certain amount and you had to go to sleep to start the next day.

The issue is if you spend a lot of time maybe designing things or working on stuff, you can lose out on entire days. I lost out the entirety of Sunday (which also means Alina’s progress got pushed back for me) AND was already on Monday night due to how long I spent on remaking my Emblem from the last game for my shop’s bag:

It’s not a fast process. I couldn’t go much faster than I did and yet I lost out on a lot of game progress for doing something I was really excited for.

Similarly, I get really paranoid about leaving game events for later being scared I’ll miss them so going to them and forcing the day ahead once done is super frustrating. It’s made me feel really paranoid about being quick when I play rather than taking my time and enjoying things. I’d love to check my online shop and maybe browse it a bit, but I’m worried I’ll lose out on a day again and screw up my own recorded progress and it’s genuinely not a fun way to play.

Overall, I like how it works–that while the start date is your real date, it actually moves the date forward so you won’t be stuck in the terrible issue of beating the game in the same month because the month doesn’t change. But the fact that the day will be forced over is really stressful and it sucks because not everything is super quick in the game. I like taking my time and checking each area in the game and I feel like I’m being punished for that.

I mean, I just turned it on out of curiousity anyway (Thank you to those who have already been to my Design Center shop and bought things!) and apparently it’s already turned afternoon and that’s killing me :/ Regardless, you can find everything I designed up on the Designer Center at Owner ID: 0005121107. I have most of the Amiibo stuff (We sadly don’t have a Luigi Amiibo and while we do have a normal Mario Amiibo (the Smash one I believe plus the Wedding one), we need to refind it.) so I have items for all of those up (if people want some with one of the different patterns, just let me know!). Just a small sample of things:

That said, I wish I went through the Scrapbook sooner because… I would have priced things cheaper X__x Sadly, you can’t edit prices… but I guess I’ll make the Mario Shirt pretty cheap or something.

I do wish the names you used for the Scrapbook were the auto names though :/ And you could have the option to change them in the Design thing after. Due to my aforementioned feeling the need to rush, I didn’t name any of them (Though, I will admit partially because I expected it to just take the name I gave them and wasn’t paying much attention) and I find it a bit frustrating that now all of them have the default name for a design and it sucks.

Despite the stress, I am still enjoying the game a lot though, even if I constantly run into stock, time, and money issues. I’m really not great at resource management–I just like dress-up games :P

To end this off, I’ll talk about the three main sings––Yolanda, Rosie, and Alina. Yolanda genuinely has some of my favorite songs and I really can’t wait to hear them in my own game. I like her a lot. 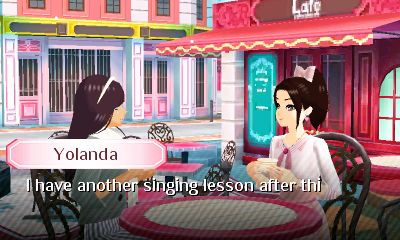 I also really like Rosie and feel I have a good amount in common with her. 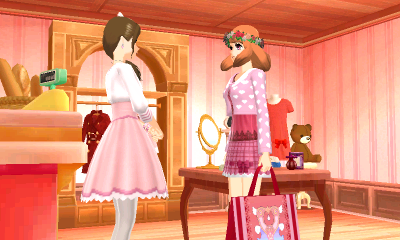 I think Rosie combined with Yolanda would be practically me. I really enjoy her songs as well, but not as many resonate with me as some of Yolanda’s.

Finally, there’s Alina who I’m still getting to know. Regardless, I don’t really care for… most of her songs which makes me feel kind of bad. Despite that, she did give me my favorite line in the game thus far: 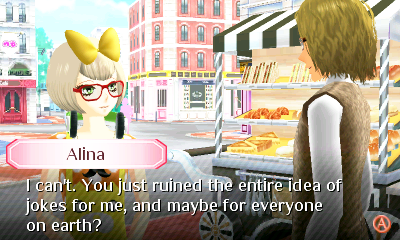 I kind of wish our character could sing too. It just looks like a lot of fun.