Day 2 of Nature Day is here and with it being more lowkey, which honestly I do appreciate, it also brings to head my further complicated feelings with the game. I still agree a lot with my post last month about how I felt frustrated and it hasn’t really lessened.

In general, I’m not necessarily against new features. But I don’t like old features that they planned to bring back anyway being forced into an update we won’t see for a while. Especially when moving stuff around sucks and terraforming is as clunky as it is and constantly changing plans due to possibly new buildings and new things gets tiring. New items is one thing, new features is another.

And just, free updates do not get me to check in that often. I stopped Splatoon before I got through every Splatfest and new thing. I stopped Splatoon 2 even faster. I’d like to hope I’ll keep checking into AC and heck, some of the events look fun, but I just… don’t like the way they’re implementing them– even as someone who doesn’t time travel.

One of the nice things about Animal Crossing is you could play how you want. There were multiple paths to get to where you hoped to. In New Horizons, things feel a lot less flexible this time around. You can’t time travel to events until Nintendo adds them, you can only earn so much interest (which while isn’t new, it’s A LOT less now when item prices are so much more), and if you’re not playing the turnip game every single week, you’re screwed. And yet if you adjust the time in anyway (switch your time to a date you had good prices to help a friend or extent a few hours to help more people), the price resets to a low price because screw you I guess.

Animal Crossing is supposed to be fun and the amount of focus on the economy and forcing you into these lines to play in feels crazy because it’s supposed to be about helping others and playing at your own pace and not “you can visit my town and talk to this one villager for a crafting recipe for 10 Nook Miles Tickets”, also don’t forget to check constantly or you could miss out on something!

I hate the turnip market. Right now, New Horizons has probably the best ranged with it between various websites and discords you can list your prices, but I just… don’t like dealing with them.

Even ignoring the potential paranoia that everyone would suddenly have terrible prices the moment I buy a single turnip, I just… have no where to put them. Can’t store them (and my storage is nearly full), can’t stand placing them anywhere, and thus I’d have an inventory full of turnips and be unable to do anything. Once I finished with turnips in New Leaf? I was done. Set. In New Horizons? I hit all the stamp accomplishments for Nook Miles, but have maybe a month’s worth of savings left at best due to the new prices in-game and just… trying to visit towns and tip nicely as I catalog forever.

Even when Summer hits, I don’t think it’ll be helpful. It feels like tree spawns have been dramatically lessened from New Leaf and even when playing in a friend’s Southern Hemisphere island last month, rarely saw any. And to be honest, I was lucky if I caught them for the museum– let alone more than that.

Crafting also is just… such a big focus to the point where it almost feels like the game could be a spin-off in a similar sense to Happy Home Designer. They said some items may be exclusive to crafting while others you can buy or items could be bought or made, but that no longer seems to be the case and while yes, maybe only about a third or so of items are crafted, it’s still a lot. Similarly, forcing colors in but being unable to change all of them feels like a mistake and as much as I love having so many pink items, there were better ways to do this.

I’m absolutely burnt out of material gathering. I have so little stone and wood. My storage is bursting at the seams. I HATE picking flowers and don’t have enough for the recipes I need to make but also don’t want more of certain colors and just, I want to play the way I want to, but it’s like I’m stuck in this rigid set of rules and it sucks. I don’t do any of the things that people consider cheating, yet I feel so lost and while yes, Animal Crossing is supposed to be a slow-paced game, it can still be one without forcing restrictions on you for how to play.

I keep trying to focus on what I like. But it’s like everything that’s wrong blares at me a little more. I wish I could just be focusing on when a villager may move out so I can easily get another favorite villager or when the items may stock or if a friend may get them in stock or if they can let me catalog something for me to order, but instead, everything has so many more steps.

Find the recipe, find the materials, make it, possibly refurbish it, make it again. And again. Can only do one at a time after all.
See an item in the store, hope it’s the right color as there is a very high chance you can’t change it and also hope you have the bells because so many items that were 2K are now like 100K+!
Even with the Amiibo, things have still been glitchy so I’ve been too afraid to use them, even when a villager does move out (and well, I’d have to scan them twice before anyway…).

And just, I love helping people. I love helping friends. But I’ve been burnt a lot in the past too and I don’t like asking for help and so when I’m forced to depend on others whether it comes to trying to get these recipes (which again means no breaks as you could miss something) or like the watering thing where 5 people watering your flowers increases breeding/hybrid chances– I don’t want to bother people (and I know a lot of you will say it’s not a bother and I appreciate that but it still doesn’t make me feel less awkward asking!!) and honestly, I hate watering my own flowers, I’m not going to ask other people to do it too.

You can bring a community together without making things so rough without it. I met some great people from so many different countries thanks to New Leaf (Zed, Chananr, Carina, Ruu, and Mika are just a few to name offhand), I’m so happy to be playing with them again and to be helping along.

But we enjoy doing that without the game saying we have to in order to play the way we want. And I wish New Horizons had more fate in that.

Anyway, you likely didn’t come here to hear me run my mouth about the endless crisis I have while playing, so let’s properly get into Day 37.

Isabelle kicked it off by letting us know the museum had indeed remodeled. I got some lovely gifts in the mail (Thank you to Meg and Melissa!!) and while I couldn’t place all of them just yet, I couldn’t resist at least placing the Harp. I always wanted to learn to play the Harp… 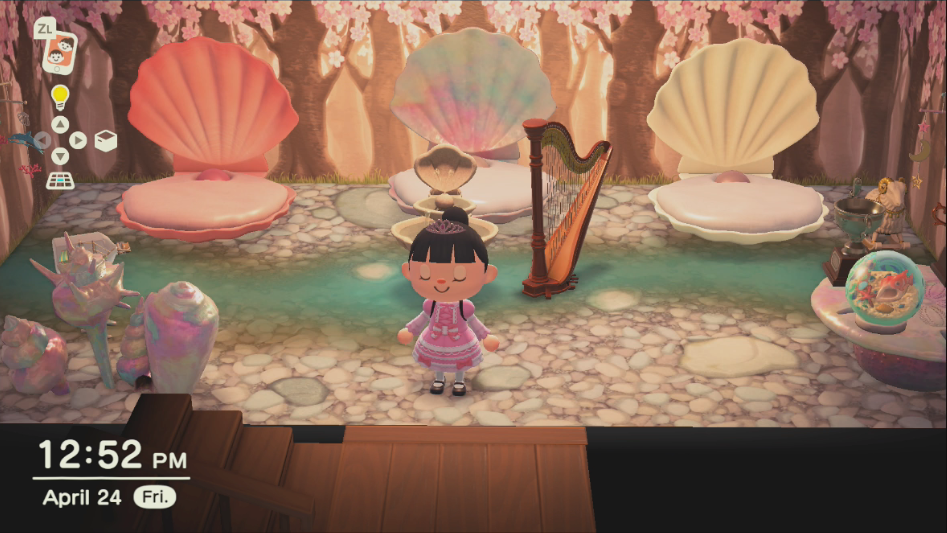 And then as soon as I left the house, I ran into Redd. 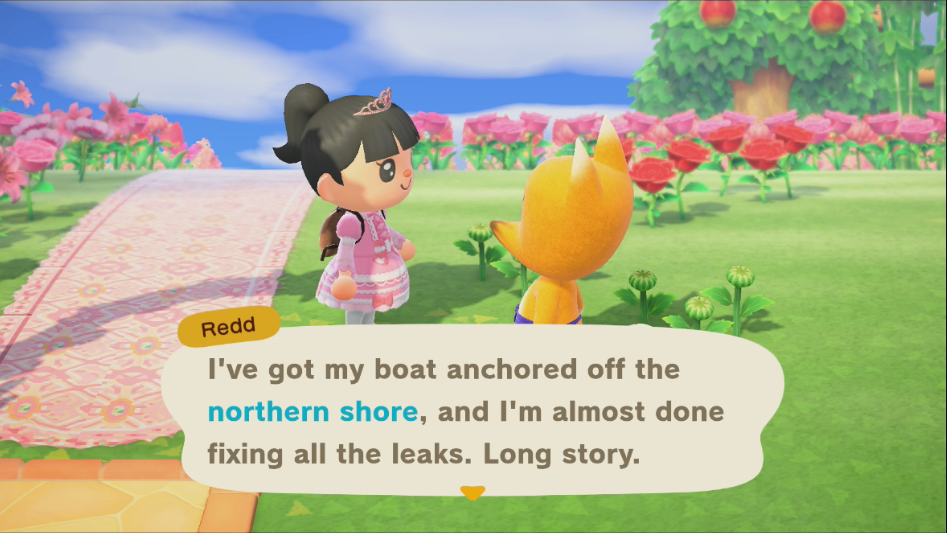 It actually threw me off a bit as I didn’t expect to see him again that quickly and get on his boat, but I appreciated it.

On my way to Redd’s ship, I then ran into Cookie who wanted to teach me a new reaction. 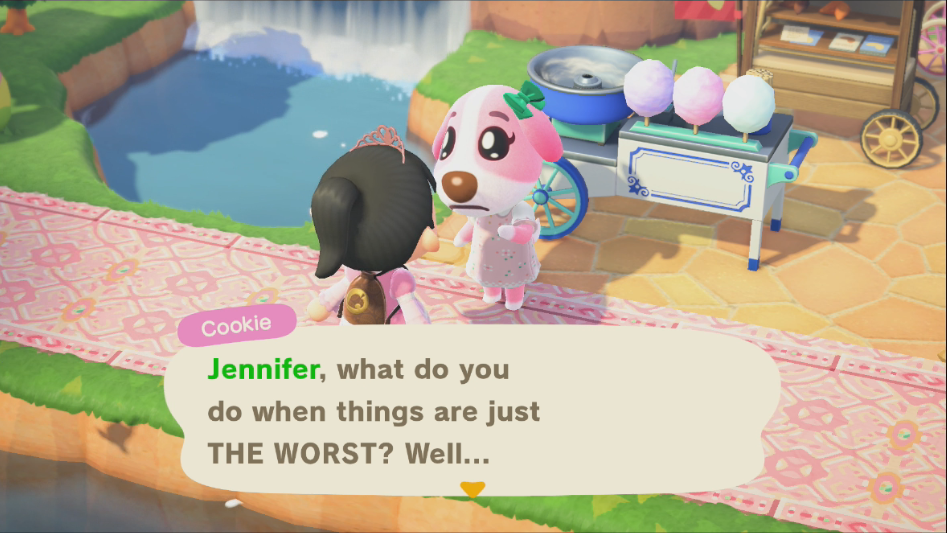 To answer this question really: I go on a several paragraph rant and cry. But sometimes Cookie’s idea works. 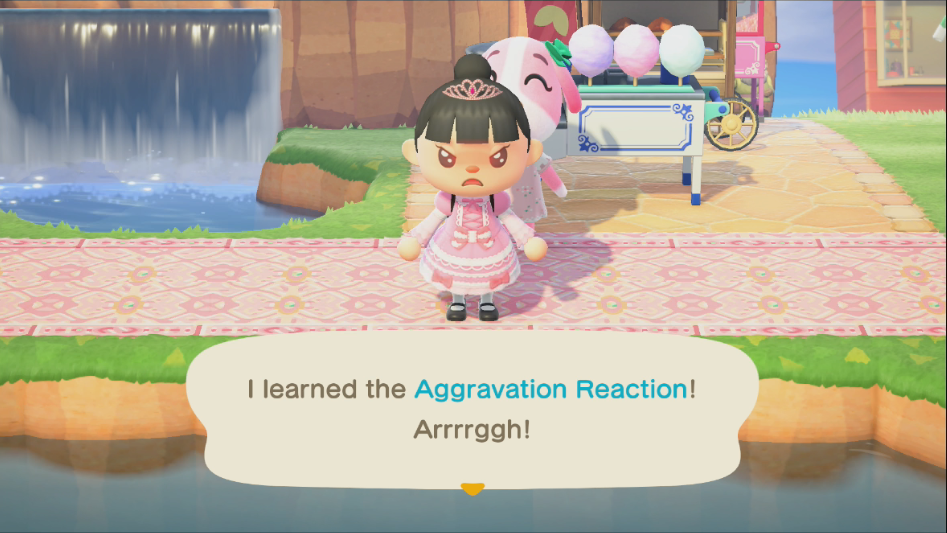 And thus I learned Aggression for when Crying just isn’t enough to show how the game is breaking me down. With a new reaction learned, I was back off to Redd’s. 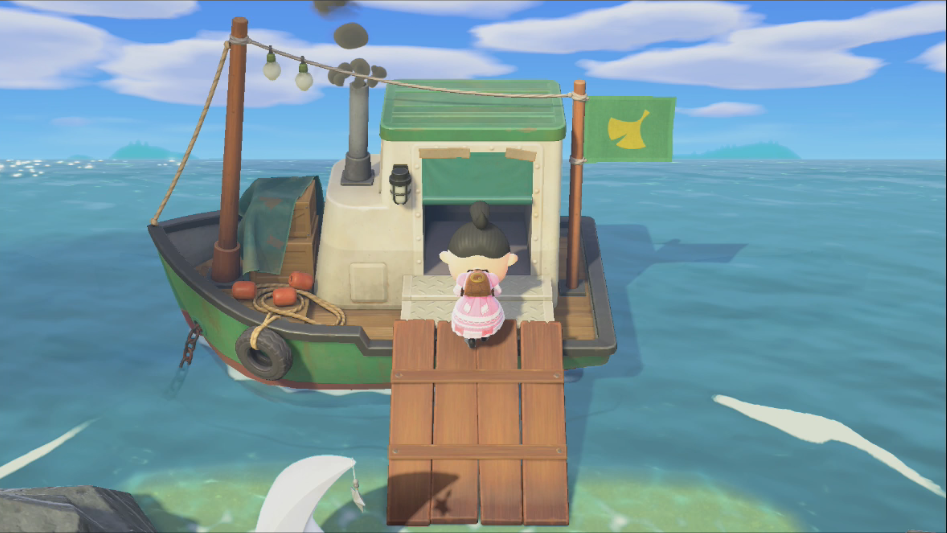 I’m honestly disappointed they brought back the “You can only buy one painting a day” thing and honestly, I’ve never been fond of waiting a whole day for the piece of art. I mean, I can SEE them. Just let me go home with it. Regardless, it wasn’t a big deal as it seemed like only one painting there was real anyway– the Wild Painting right half. The Serene Painting definitely had a different coloring for the Ermine, the Famous Painting had different eyebrows, and I’m pretty sure the Amazing Painting didn’t have the hat, but that one I felt was the trickiest to tell for sure of these three. In the end, I had my husband come over to buy one of the fake ones anyway for me to donate as seeing some of the other negative Nook Miles things, I wouldn’t be surprised if there was one for submitting a fake painting too. And well, if I was wrong about the Amazing Painting and it wasn’t actually fake and the hat was there, I didn’t miss out on anything. But I’m pretty sure it was fake.

I then quickly made two fences for my Nature Day Nook Miles+ goal today and checked with Tom Nook, but it there was no other special rewards or anything beyond the additional Nook Miles. We could, however, hold the ceremony for the Museum so of course I did that. 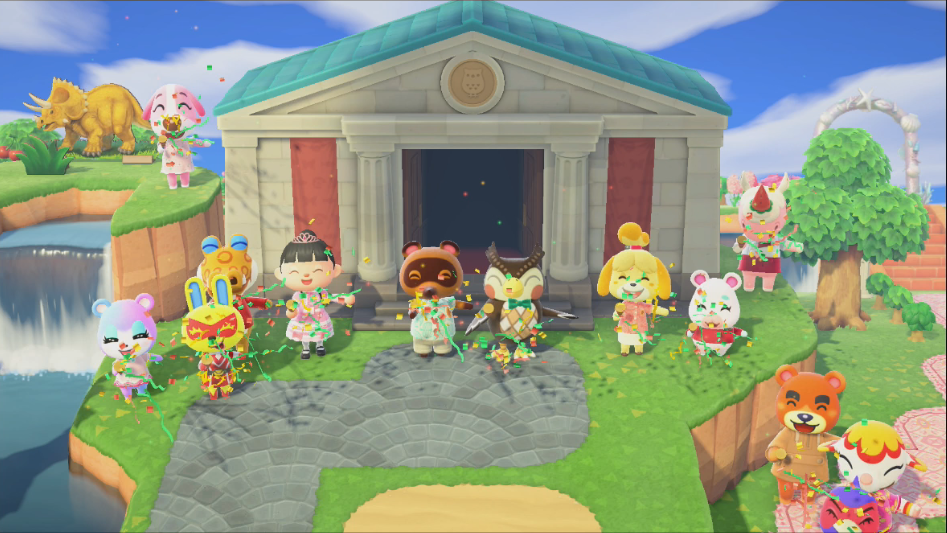 I really love the new museum. I also love how they tell you information on the painting now when reading the description. 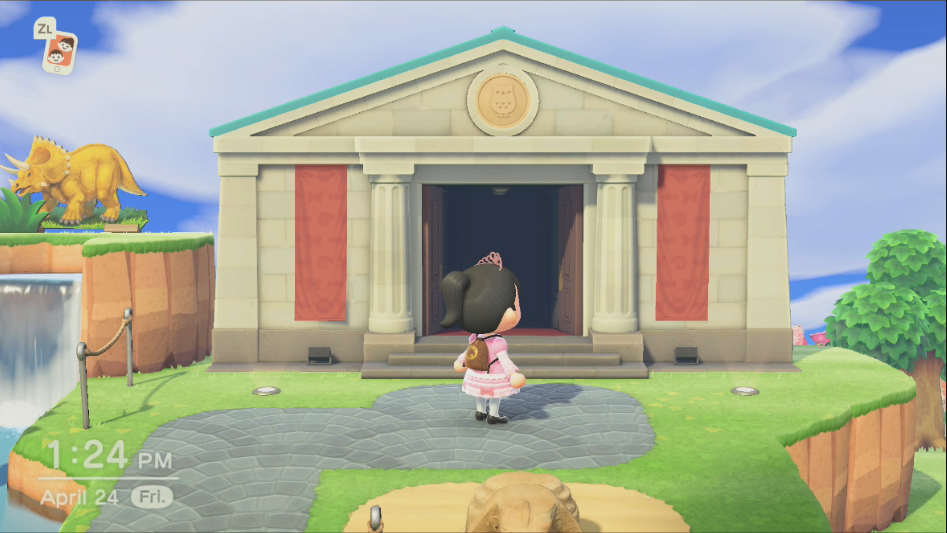 Not too much happened otherwise. Marina is properly moved in and I’m super happy to see her.

I visited Puku for cataloging, but we sadly ran into a glitch where the game just had us stuck (her in a loading screen and me trying to pick something up) despite things still happening around us… So we’re hoping to try again soon.

I then visited Sami’s town to see Celeste and got an Astronaut suit recipe. I also got a Bamboo flooring recipe from Octavian. After that, I did some random crafting for other people.

Once back in my own town, I tried clearing out my storage. I mostly sold things, but I also placed some stuff I had been planning to and hadn’t yet. And I even found another Lily of the Valley/Jacob’s ladder! 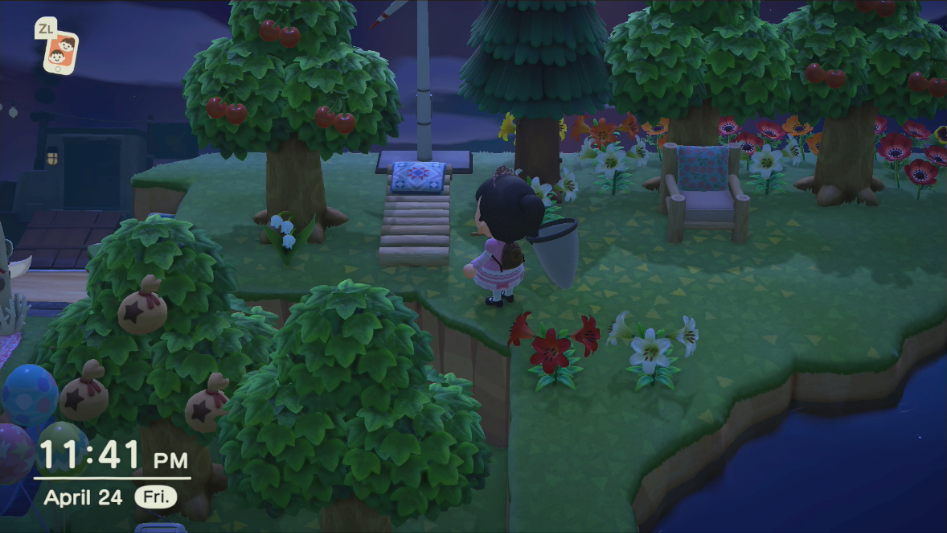 Unfortunately, while shaking some trees (and then giving up early because honestly my trees just aren’t in a great position for gift searching), I got stung as due to things being in front of the tree, I ended up shaking the tree again instead of actually swinging the net.

On my way back to my house to continue storage clearing (and also get medicine for my face as all the shops since closed), I ran into Flurry who actually gave me some medicine. 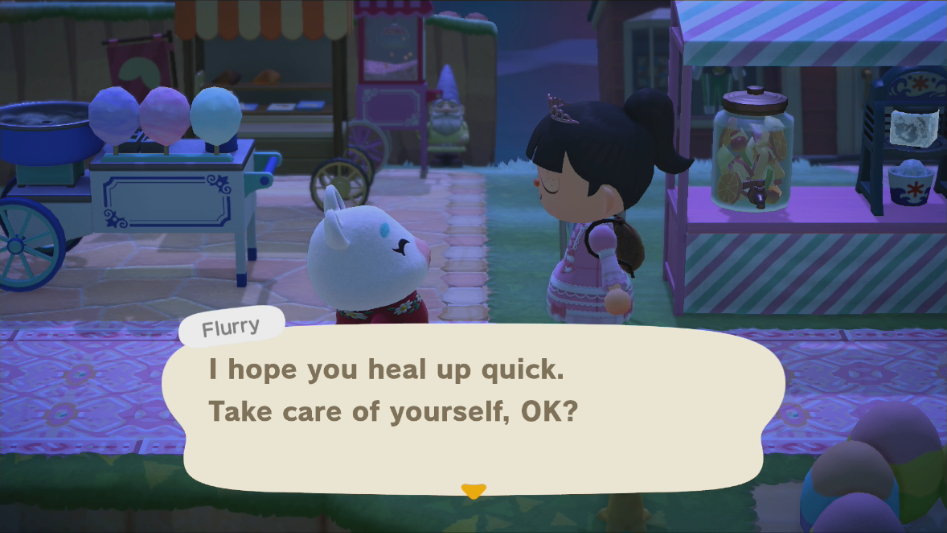 I sent her a thank you letter and a gift and then continued my storage wipe. In the end, I made about 250K selling a bunch of stuff which… is about what I ended up spending because the prices in this game suck so I guess at least I broke even.