New Genesis has been out for about a month now so I just wanted to talk about my thoughts with it a bit. I will say I have no issue with the “lack of content” because, well, obviously. Especially the slower schedule as we’re getting updated at the same time as Japan instead of a 1 year rush of tons of content Japan had gotten over several years (and we… still didn’t get everything so).

I would say the only things I have issues with in that sense are the things that did exist at the very start when the original PSO2 launched in Japan that are not here for one reason or another like trading. Not having trading sucks and I really liked giving things to friends. Having to deal with the market on top of higher taxes and certain forced prices (which maybe supposedly have changed?), I’m now using up more space just holding onto things and a “Trade” option is still there… Just greyed out.

Another odd thing us that despite being told there would be no Rooms to decorate this time around, we’re mentioned to be getting one right in the Story and even head to a building to “rest” in aa room we never get to see. It just made the removal of them stand out all the more.

One of my biggest issue though is not seeing changes to the Star Gem system. Not being able to sell/trade items just… really stinks. I’ve gotten some items like 5 times which are ones I know friends have really wanted and have just had the worst luck with the few things I wanted. Similarly, despite the big hype on hand motions/fingers that move, the first hand motions we get are stuck to a SG Scratch… Can’t trade, can’t sell, and they’re all “featured” items and thus, rarer to pull. And SG aren’t cheap. Sure, you can earn them in the game too (After all, it’s a “Freemium” currency), but at the moment, there’s no real ways to consistently get them in NGS. There is a limit to the amount you can get in boxes (as those boxes only show up once) and while you can do some stuff in regular PSO2, most people aren’t bothering to go back and forth. This is especially an issue when Material Storage feels like a necessity in NGS with how much there is to gather while you’re out and about and yet, you can only purchase it for 30 Days at a time with Star Gems. I wish it was a permanent purchase or even part of Premium, but right now it just feels even more frustrating than it did in the original PSO2.

Going past my customization dreams, I find the gameplay a lot of fun still and love running and gliding around the world. Anytime I o back to regular PSO2, it always feels really sluggish in comparison as the movement just doesn’t feel as quick and fluid. 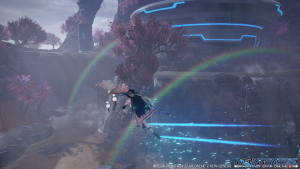 That said, there are some downsides to everything being so seamless: The lack of places to stop and rest and most frustratingly, the fact that Rare Drop and Experience Rate ups get used while offline or even just in town versus how it would only be used up when actually in a map besides the Alliance Boost which you can always re-get. PSO2 Day’s boost for NGS is also incredibly low and while I can guess why due to NGS’ newness, it’s made the day feel a lot less special.

In a similar sense, we have our first event right now, but it just being on the open world with no special areas means there’s no place to focus so when you need those last few things (As we continue to try and find one more Rappy), it feels a lot more overwhelming trying to get everything done. We don’t even have a schedule for the UQs so it’s just… hoping you catch one for the limited time quests. 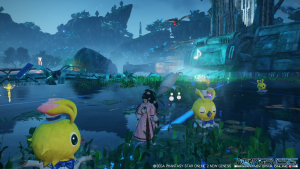 Despite these concerns mechanic-wise, I will say Central City looks really pretty with the decorations and I’m excited to see how it’ll be decorated for future events too. 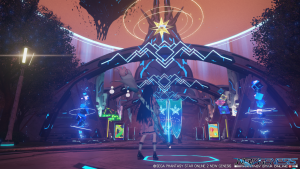 Regardless, I will say I have been having trouble getting a good handle on Force in NGS. I think the biggest thing that throws me off this time around is charging up techniques is relatively worthless. It doesn’t do more damage– if anything, it just has a secondary effect or a different attack habit almost like an entirely different attack over necessarily a stronger one. So much feels like a lead up to a powerful blast over doing a lot at once and I don’t really enjoy slow build up. The other issue is as someone who finds clicking a lot rather painful after a while, the constant of having to do that with my mouse now that charging attacks is relatively useless (It’s much faster to just do neutral attacks than charge up an attack for no pay-off) so I’m just spamming left click, right click, or the left side button depending on what I’m trying to do and it’s exhausting. In general, some fights just feel so long and it’s kind of tiring.

Not to mention Gigantix which has unfortunately caused some rudeness to spring up due to the fact that if you’re under level 20, you barely do any damage to the boss. And it kind of worries me in the future of how specific things like “rotations” and “skill trees” and how much people could try to min-max because of how little leeway there is. I’m hoping it can eventually be more flexible as nobody should be told to leave an area due to not being a high enough level. There’s so many reasons someone could be there and a lot of areas are pretty huge. While they are making adjustments so anyone under level 20 will not cause any issues in an upcoming patch, it still puts aa lot of focus on getting to max as possible and even as someone who is max level, it just makes me feel better for those who aren’t yet and may feel excluded.

Battle Power especially has me concerned for that min-max thing with people struggling to even reach the first requirements for the story which is still very early in the beginning (and we’ll just ignore that someone has already possibly not made it or gotten possessed or something T__T) and more than anything, it’s made me miss Casual mode. I like Story a lot, but honestly, I’m not here to go super hard difficulty, especially by myself. I consider myself more a support player who also does damage and not really a DPS class so being thrown into the story with no casual mode for those who maybe just want to enjoy that story is disheartening.

Finally, I have been enjoying the nicer graphics for the most part, but the old hair just looks… so awkward with newer stuff and I really hope an NGS hairstyle I like will eventually be out. As it is, my character feels slightly off outside the salon and I can’t figure out why. I have tried so hard to make her look as nice as my original did, but something always feels off. I’m hoping maybe I’ll feel better about it once I get a new hairstyle. 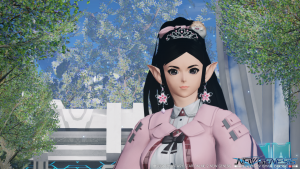 I do want them to find a way for the Global version to get the campaigns Japan does. I don’t think there’s any good reason not to and I feel like trying to make a global game and keep it up with the original server and yet excluding various items is just… a really bad plan all around. I guess I just have a lot of concerns more than anything.

Still having fun though and still enjoying playing each day. I’m looking forward to the next part of the story.