If there’s one game I’ve been asked about a lot lately, it’s Genshin Impact. I’ve played it a lot lately, partially due to my husband, but have mentioned there is a reason I didn’t really play it: The game isn’t really my type of game. Having played much more of it, I do still feel that’s applicable, but I would say my feelings on it have changed more to “complicated” and “overwhelming”.

It’s interesting how this is a Free to Play game because there’s definitely a lot to it and it almost feels MMO-esque at times ignoring the lack of multiplayer. Yes, Genshin Impact does have a co-op feature, but it’s also kind of terrible. I promise I will be bringing it up… a lot. I think part of it’s issues is it does have some common Mobile Money grabs and Walls which, I suppose the game is also on Mobile, but can still feel kind of awkward to suddenly run into.

I will say, for the most part, the game actually gives you a lot of stuff for free. The Battle Pass levels up with simple daily tasks (more often than not), some tougher weeklies, and even stuff from just participating in Events. Events often have a lot of rewards as well. It’s just a matter of putting the time in. One thing I do appreciate, as close as it can get, is that it’s not impossible to finish a quest if you’re on the last day– as long as you have the AR Requirements, but honestly, some people get their AR up pretty fast so even that may be more probable than I expect.

I think the biggest aversion with the game is the Gachapon system and, like most people, I’m pretty tired of Gachapon systems. I’d love to just be able to buy the game and play through with my husband and unlock characters as we meet them, but alas… I would say the biggest issue though is it could take a while for you to find a character that “works” for you. I have very specific playstyles and still haven’t even found a character for each element that I can work with. I don’t know if they even exist yet. Trials only show you the full potential, but not necessarily how they can feel at the start. You do earn A LOT of Primogems though just by playing and while there is obviously some RNG involved, it doesn’t feel impossible to get good characters even if you play completely for free– it’s mainly just if you’ll get at least one character that works with your playstyle. I do wish it was possible to get a pick of a character (even if just 4*’s) to help find one that fits your style to start you off.

Several of my issues felt less frustrating when I ended up pulling Jean and Ayaka who I both really enjoy playing as. Traveler is okay, but I can only really make her work as Wind. I’m pretty awful with both Geo and Electro. Unfortunately, gathering stuff to level characters can be a lot, especially as someone who struggles finding her way to Point A to Point B on a daily basis, let alone remembering where I’ve already been. I’ve never really enjoyed gathering, not even just due to my hatred of dailies, but because I just can’t keep track. I’ll be going in circles, still clearly missing things, and then just get frustrated, burnt out, or both. But it’s also not fun for me to have to bother friends because I have the navigation skills of a chicken with a bag over its head.

And that’s where we get to my biggest issue: The Co-Op restrictions. I’d feel so much better playing the game with Co-Op all the time, but… you can’t complete quests with Co-Op, Gathering items are once per person, Chests are just for the Host, you literally can’t do 90% of quests (and some even disable the Co-Op)– heck, you can’t even unlock Co-Op until AR16. And I don’t know why. It’s easily a lot more fun with Co-Op, at least for me, but beyond maybe farming some enemy groups (which if you are doing it for chests, they will have to re-do it in their own World anyway if they haven’t already) and Boss fights specifically, most things are closed off. It makes Co-Op solely an end-game grinding thing because you can’t hunt Oculi together, you can’t take care of Seelie together, the world is “your world” very specifically and beyond if someone feels like taking your gathering stuff because you couldn’t get to them yet (Which is really the #1 reason to not play with strangers), there’s not much for you to share progress in. You can’t even give each other things if maybe you have some enemy drops you’re not really using or just want to share gathering things without constantly flip-flopping worlds and grabbing all over again.

I wish it could count for us both because I feel terrible when I have to be slowly walked through places and am the reason it takes so much longer. This especially becomes a problem in Dragonspine where you can slowly start freezing to death and not even Goulash can help save me from my navigational problems.

Not to mention some characters can just be… super helpful. Venti can spawn a small wind current, Zhongli gives you a giant Pillar, yes they’re gods so I guess they can have overpowered helpful powers, but when they’re only possible to get through limited run banners (even if the game has been pretty good at bringing them back), it’s kind of disheartening as then you just need to hope someone would be willing to help you out. That said, you don’t need them, of course, it just makes some things easier. There’s plenty of other ways to get things (whether they’re the right way or not, who knows), but sometimes it can still save a lot of time.

And I think that’s the big thing– some stuff can be super annoying, but I don’t think any of it is necessarily impossible. At the same time, I’m already feeling that burnt outness of just needing to gather up so many things to get my characters up when I have no idea where I am going. Part of me really wants to finish everything before 2.1 hits at the end of the month, but that’s about a week and a half away and likely impossible for someone like me.

It doesn’t help that some things are so… convoluted. It’s not just “hey this weapon has more power”– it’s, these weapons have different skills and in addition to new weapons, you also need to level up and ascend them. Also every character has 5 different pieces of gear each which can also be upgraded and have a random stat at one point and different stats and skills attached and then there’s the character’s individual skills that can be leveled plus a Constellation system that only levels up on Repeats of the Character (or other means for the Traveler) and I just…It’s so much. It’s so so so so much. Not even going into RNG with some of the Artifacts, it honestly feels almost suffocating trying to keep track of everything to make sure your characters aren’t complete garbage. It doesn’t help that the best things require a higher World Level, but that also raises the level of all the enemies and if you’re struggling along, chances are your characters may not even be up to that level yet. Even right now, I’m stuck because my quest got me to AR40 (making all enemies generally start at level 69 when most of my party is level 60) while doing a Side quest and now my party is too low level to deal with it. Sure, I can lower the World level by 1 and honestly, I probably will, but at the same time I’m just frustrated by how much I just feel like I really suck.

While there are “tiers” where you can level up your World and your AR will be paused until you do them (though, your experience will be saved apparently), every 5 levels for about 2-3 increases will automatically boost your World level up. You can lower it by one, but then your loot also gets lessened– at the same time, clearly the best thing to do is gather like crazy and get way higher than them before you let your World upgrade. That said, AR goes up by doing nearly anything and if you already unlocked the AR Leveling hold, then you have no more control over when it’ll upgrade again until the next one appears.

Part of me is so frustrated and wants to give up, but I like playing with my husband and friends. 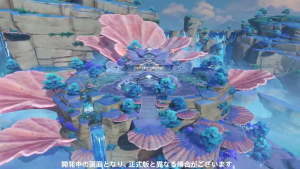 And how they’ll be adding a fishing feature I know I’ll suck at but says you can collect certain fish in this cute Waterfall Pond thing for your Serenitea Pot (Housing system where why couldn’t I pick my House style separately from my scenery, game…): 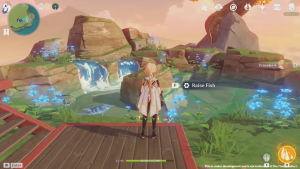 And just… I want to see the story play out. I am attached to some of the characters. But I’m also just… really bad at the game. It’s not my type of game. It’s not a game I’m good at. It’s not the type of game I can put in all the work to get better at without burning out entirely.

But part of me wants to keep going. And that feels frustrating too. I’d like to say maybe it’ll feel less overwhelming if I manage to just get to where all I need to do is gather, but I don’t think that’s true.