In general, I tend to always have certain goals in Pokemon:
1. Have all the customization stuff I like
2. Complete my Pokedex
3. Get all the Certificates and other trinkets
4. Get every ribbon I can on each of my main party (So this excludes the special event ribbons and Champion Ribbons (plus the ribbons from past games since I try to make my party in each game just who you can get in that generation and they are all from Gen 6) because those are things I can never get…. though, those facts really bother my OCPD)

For XY, I have only 2 completely done. I have most of one done (all the clothes), but am currently stuck because of decorations. As far as I’ve been able to check, nobody knows for sure what all the decorations are. Most just list “that they have found” and I haven’t really seen ones with pictures of everything either. As someone who loves these kind of things, this is really annoying. Two of the items I know I want that I haven’t seen are the Substitute Doll and the Pikachu Hot Air Balloon. But the entire way to get them is pretty random which means not only do I know if I will ever get them, there’s no real control on even getting what I know I want (and who knows what else I could want!). This is why I really am not fond of random/luck-based systems. I had really enjoyed the Movies in B/W2 to an extent because of how it worked like a puzzle, but the fact that there was still a large system of randomness in there (versus if it was the right choice, it would always go through rather than a chance to fail) made it quite frustrating at points.

This is my Pokemon Amie at the moment: 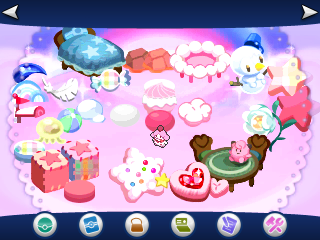 It’s cute, but I’m not still super happy about it quite yet either. I think I have all the backgrounds at least now? But I also have over 10 of several items and some even more than 20.

And there could still be more (considering I even noticed some I had gotten that were not there) :/

As for #3 (and this also ties into #4)… While I did complete my Pokedex, I have not managed to earn any of the trophies/statues for completing the Battle Maison and thus, will most likely not earn those Ribbons either (You get one for beating any on normal and another for beating any on Super) and it infuriates me to no end because I can’t say enough how much I hate the Battle Frontier–and when I say Battle Frontier, I mean all iterations of it so this includes the Pokemon World Tournament, the Pokemon Battle Subway, and the Pokemon Battle Maison. Essentially every Battle Tower and it’s other versions. It’s not that I don’t care so much for the different themes–it’s that it is essentially forcing Competitive Battling into the game and I don’t care to competitive battle at all.

For me, it’s against how I like to play Pokemon. I like to go with a team of Pokemon I meet and stick with them. These Pokemon that got me through the game. Not breed them over and over to get “perfect versions” of them. Not only do I rarely use the breeding feature (another OCPD thing partially), but as the idea of going on this journey with these Pokemon you become friends with, the idea of turning them into breeding machines feels really messed up to me. And so, I have no interest in it.

And while I can prepare my Pokemon either by leveling quite a bit or preparing their attacks so the team of 6 can do anything, I can’t do that in those modes because they are full of perfect IV/EV Pokemon (something that, again, I don’t care for) and legendaries and just… computer characters tend to cheat to begin with and this is like them at their cheating ultimate. I rarely have luck on my side in games, I often get screwed over by the RNG, and this just isn’t fun for me. I probably wouldn’t care if I could keep my Pokemon at 100 (even if it’d be overkill) or like how the mandatory first visit to the Pokemon World Tournament where your Pokemon kept their levels even if it was much higher than the competition.

And people will go “well, it’s optional”, but when you’re completionist it’s really really really not. It’s not that I don’t want to work for it–it’s that it’s something that goes for only one way of playing the game and not everyone who enjoys Pokemon likes to play that way. I don’t battle online because this is something that has become the “norm” and I’m just not okay with it. I like my team. I don’t care if they aren’t the super most awesome team ever. I went through the game with them and I had a fun journey through XY with them and I had fun. And then it’s like hitting a giant brick wall that tells me “They’re not good enough”. They became champions of the region and you’re going to tell me they aren’t good enough? That sucks. That really really really sucks. It’s one thing to play other ways to complete things–it’s another point where a game tells you “oh hey, this is a journey with these new friends to explore the world of Pokemon!” then when you get to the end “Time to toss them to the curb because they suck!”.

And no, I can’t just “make better versions”–this is my team. I do not want to replace them. And if I ever started a Pokemon game with breeding this perfect team, it would just be completely against why I play and enjoy Pokemon. That day I’d ever do that is the day I’d no longer play the game. I don’t have anything against people who do it–some of my best friends do it. I have fun watching some of the tournaments. Just don’t force people like me who enjoy playing and just knowing type advantages and other things and don’t care about all these inner stats and numbers behind the screen.

Let us go on a journey and make friends–not train the ultimate knock out machines. And I try so hard with what I can do–I even suffered through the EV games and I can’t aim worth crud: 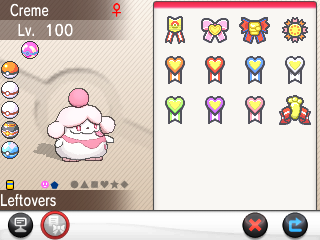 But it’ll never be complete due to a mode I can’t do because of how it works. And I hate that it was created. Whether that mode was there or not, there’d still be competitive Pokemon. And maybe there could be an option to put at equal level (for those who want the competitive mode) or to keep a player’s Pokemon as is. Just something so those who want to complete the game but not be SUPERHARDCORECOMPETITIVE can still finish it. Because right now, unless they do the latter, they can’t. And that has literally been such a motivation breaker for me each and every game. I mean, can I possibly get extremely lucky? SURE. MAYBE! But it’s highly unlikely and as it is, I hear more often than not that my team isn’t good enough. :(

If the Battle Frontier stayed like the Tower in Crystal (no actual ingame reward) or was just BP for special Battle items and didn’t have ribbons or trophies or other cool customizeable stuff (besides changing the color of the Trainer ID–I don’t mind that at all.), I wouldn’t care. It’s just those few things where it’s like the only thing left to finish. It’d be like if there was another badge you can get. That just sucks, optional or not.

Moving onto ORAS announcements, more information on the contests were announced. I’m pretty excited about Cosplay Pikachu–though, I still wish there were other colors of the outfits or you can mix and match parts. I adore the Belle outfit, but have mixed feelings on the hat and don’t care much for the color–similarly, I really like the colors and sparkles and bow of the Cute outfit, but don’t like how un-modest it is. This would be the most awesome thing ever: 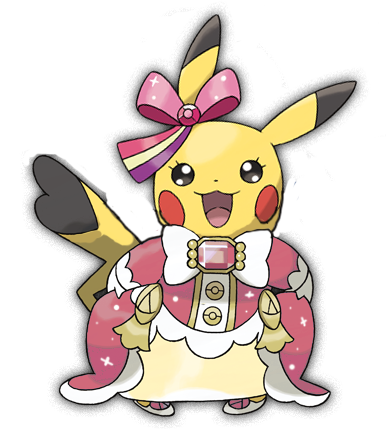 Speaking of un-modesty, I REALLY hope this isn’t the only contest outfit: 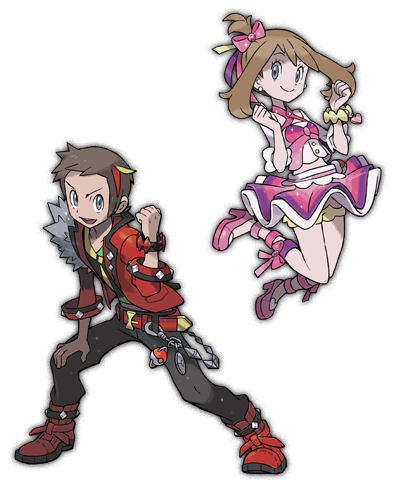 While yay pink, I just… I don’t like how much the outfit shows. I 100% prefer Dawn’s contest outfit (pink dress) or even wouldn’t mind seeing Rosa’s Princess dress from the movie as a contest outfit:

Not to mention there are more Pikachu than that so it’d be odd to just have one that only matches one each… I also hope since outfits are being mentioned (Plus Brendan’s new skin color), Customized Trainers really will return. I think it’ll be incredibly stupid if they don’t… I mean, just in Secret Bases alone it’d be really awesome and I’d love to see more outfits, but it still hasn’t been announced yet and Pokemon tends to have a trend of removing neat things through the games (Pokemon following you, Secret Bases in the first place, Seasons, etc.) while leaving stuff like the Battle Frontier :| (Which hopefully since it’s Ruby and Sapphire remakes, may actually not be featured! But it probably will. And have special furniture and ribbons. Because of course -_-)

I just hope I’ll be able to get my Pokemon’s appearance stats high enough (with PokeBlocks that raise all stats) to get the ribbons on each of my party for ORAS. I always have hated how you have to switch attacks around for Contests versus Battling more often than not if you want to do more than one… Hopefully the TMs being able to be used more than once will stick around and make that less painful at least.

Finally, to end this in a more happy tone (though, there are some happy things strewn about above), I received my most recent order from PokemonCenter.com today!: 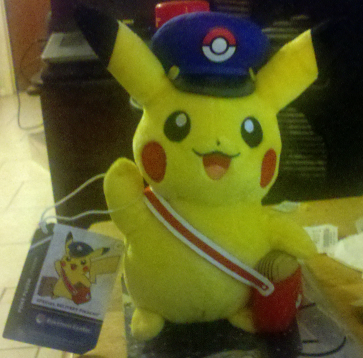 Special Delivery Pikachu (SO happy I got one before it sold out!) – It’s so cute. Really soft–you can’t remove anything (unless you pull/snip a few threads) and the little brown package also has a pokeball on it like the Pokeball on the bag and hat. 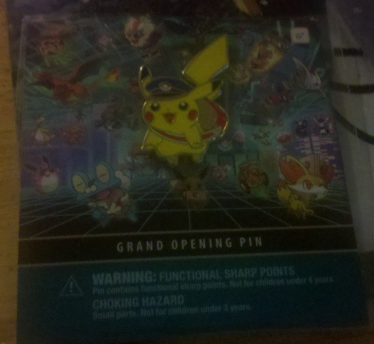 The Postcard set! The enevelopes are just plain white (as are the insides of each card), but there’s one of each sticker (and enough for each card) plus on the back of each card is one of the same designs as the stickers: 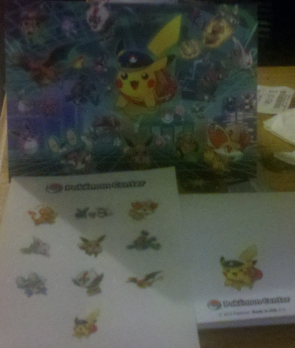 Close-up of the Stickers + one of the Postcard Backs: 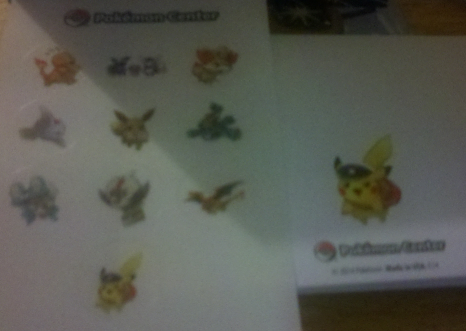 The Notebook – It’s the same size as the Pikachu notebook, but I think the Pikachu one is nicer. The artwork is still lovely though: 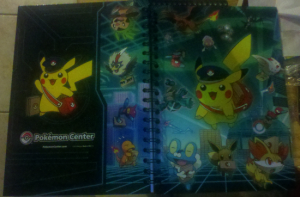 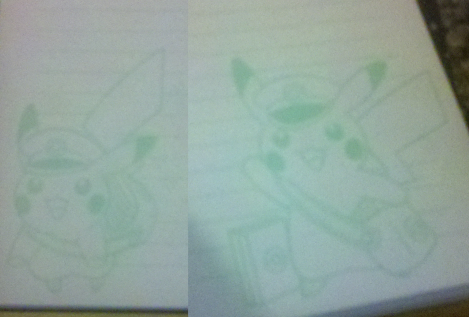 I still really want to get this and possibly a few shirts so I’m sure I’ll make another order eventually… I just hope the Grand Opening Notecube doesn’t sell out T~T (also debating on the Binder as it looks nice, but I really have no use for it right now…)