While I haven’t gotten to play it as much as I’d like (being sick sucks) and thus, there’s a good chance some of what I end up saying here may change, I’ve been really enjoying the game. For reference, I’m just about to hit the Kleaver fight and have played for roughly 7-8 hours so far.

While I was worried for a similar issue like what I had with Pokemon: Let’s Go, I haven’t run into as much of the same problem. Maybe because I can quickly find resources to make more Pokeballs AND also immediately make those Pokeballs. Maybe I’ll feel a little more stressed about when I need better balls (which honestly, I probably already do), but for now, it’s not bothering me to be trying to catch so many.

I think what also helps is that I have a constant counter for how many I need, there’s no “catch streak” requirement just to get certain Pokemon to even spawn which you would then need to needlessly repeat, most Pokemon can be found in decent batches so you can try and get a bunch to knock it out at once, and there’s multiple different ways to try and get that Pokedex report done.

I will say most of my complaints come from being the only person who plays Pokemon and hates the battle system. I really do not like the whole “hey, some Pokemon will just aggro you and start chasing you down”. I could maybe stand the Alphas in the sense of them being mini bosses (though I still wouldn’t like it), but otherwise it gets very… tiring. Sure, I could just turn around and fight it, but ignoring the chance of another Pokemon sneaking up behind me to also try and kill me (while you likely will not die, the game repeatedly brings up that you could), I just… don’t want to. When there’s so many other neat ways to get “Pokedex data”, the battle mechanic is especially boring to me.

But what makes it even worse for me is battles feel slower in this game. Obviously, your mileage may vary, but I find moves feel weaker, that super effective doesn’t always feel that way, the whole “sometimes a Pokemon can move twice in a row” gets really annoying especially if ganged up on by multiple Pokemon, and I just… find them extra stressful? Every single move feels weightier and while some people enjoy that, I liked being able to get those battles out quickly with one proper attack.

Trainer Battles are generally simpler, with most trainers having small Teams, if more than one Pokemon. At the very least, it means I can explore without worrying about my eyes getting locked with a trainer ready to try to destroy me versus just running for my life from whichever Pokemon saw me instead.

I will say that leveling also feels slower and I’m not entirely sure why or know if that’s truly accurate– it’s possible it’s not that I’m leveling slower so much as it feels like I’m just not able to do as much, or in a sense: I still feel really weak despite their levels which partially goes back to what I said about Battles feeling slower.

Unsurprisingly, I’m still not fond of crafting, though, I feel like this game has annoyed me less with it than most others. My only complaint is still having a bag limit. The increments are by one slot, consistently get more expensive, and I do believe there is STILL a limit. Yes, you have storage, and yes, you can fast travel to it, but if you’re me, that doesn’t mean you’ll find your way back to where you were that you suddenly needed more room anytime soon. It’d be nice if it was possible to do a temporary warp spot. Maybe it’ll feel a little less frustrating when I unlock the ability to have helpful traversal Pokemon though.

I also find it interesting that we finally have various different sized Pokemon in a game besides Pokemon GO and Pumpkaboo’s existence, but with the focus on Alpha Pokemon (which are huge) and how they may even have special moves, I feel like smaller sizes don’t get as much opportunity to shine.

Regardless, the game actually has a lot of neat quality of life features from the quick warping from the get-go, easily being able to swap Pokemon, having Pokemon just… be able to grab berries/materials for you by just tossing them at it, a decent aiming system (though, I still manage to miss a bit too often), the ability to choose if you want a Pokemon to evolve manually, being able to just… have your Pokemon learn and replace moves whenever you want without any TMs, and even an item that lets you evolve Pokemon that require trading if you don’t have anyone to tradeback with. A lot of these things I do hope to see make their way into a future game series.

I will say where the game is kind of lacking for me though is customization– I think they wanted to try and tie in stuff appropriate to the time period and culture which is fine, but I wish things still weren’t gendered. Besides hairstyles, certain clothing looks different as well, and I much prefer how the “fancy” pants look on the boys than the girls. I also wish there were more color options– we already see them be a bit more unique with some of the Fancy outfits or patterns so I kind of wish there were in general.
I also continue to wish that they would consider letting us pick hair and eye color separate from skin color. It’s kind of immersion breaking for me when I know I’ll be changing my hair color and eye color as soon as possible to see a different one in these initial cutscenes. The character on the ID also doesn’t change which makes me sad. I’m hoping our character’s changed appearance will stick, but part of me figures it’ll reset somehow anyway.

Finally, I find it very odd that you can’t remove the headscarf on the only ponytail style that girls have? I like it enough that I’ll stick with it if I need to, but it feels odd to force especially when no other hairstyle has it. 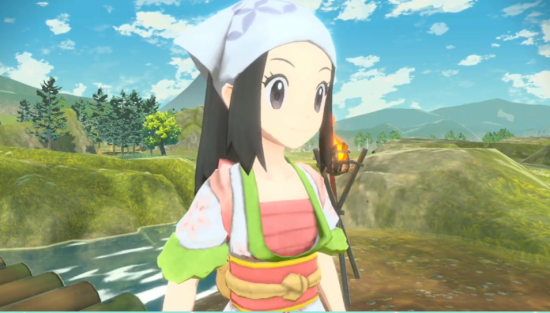 Anyway, despite my reservations and struggles, I’m actually really excited to see what’s next in the game. Also, the Midnight Music has to be easily one of my all-time favorite tracks in a Pokemon game at this point. It really feels magical in a way I can’t fully put into words.