And no, I’m not talking about Pooh–although, he’s definitely a favorite. I’m talking about the Tokyo Disney teddy bears–Duffy and the UniBEARsity line.

I’m going to go ahead and start with Duffy. He is pretty big in Tokyo Disney Sea (he even has his own website!) and a few years ago, finally came over to the US (not too long after getting a female companion–Shellie May). 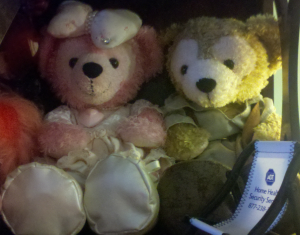 To the left in that picture is my Duffy! I picked him up when I went to Tokyo Disney for the very first time several years ago. I adore him to pieces and it made me look up all sorts of things–like the costumes that came out and special releases. They make so many things for Duffy–candy, outfits, special accessories, and even sell special food shaped like him during special events.

As for that pink bear on the right who looks eerily similar to Duffy… I named her Ahim (kudos if you know where the name is from!) and she’s a Disney Bear. Disney Bears were sold in Disney World several years before Duffy, but due to lack of popularity (due to lack of advertising and doing much with them), they were discontinued.

Tokyo Disney then took up the old Disney Bear contract and recreated it into Duffy–a full character with his own story and events. His popularity over in Japan brought the Disney Bear back to the US–now as Duffy the Disney Bear.

Besides Duffy, Tokyo Disney also made the UniBEARsity line for their Disney Stores. Their story given through many videos. I had wanted one for a long time as I thought they looked super cute, but had been undecided on who to get (I really couldn’t afford to get all of them afterall). Eventually, one did come out that really caught my eye–Berry, a UniBEARsity Bear based off of Angel, Experiment 624 from the Lilo & Stitch TV Show. She was apart of a special set with bears based off of Stitch and Scrump to celebrate the anniversary of the movie and was limited to 5,000. I made sure to continue to keep an eye out for her and surely enough, one did pop up at a good price. And today, she arrived! 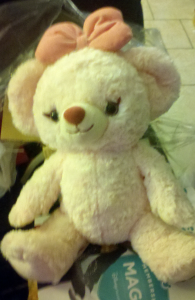 She’s around the same size as Duffy and Ahim and I absolutely adore her–she’s super soft as is her bow and she’s just so cute T~T Next, I think I’d like to get her a cute outfit one day…