Before I get started, I want to say that this is NOT sponsored in any way– this is something my family decided to try out for reasons I’ll explain further into this entry. While I have been through a special Culinary program, I would say my cooking skills are mixed for reasons that will also be explained later so don’t judge too harshly for stupid mistakes especially as I am a fairly literal person.

With that out of the way, let’s get into this. Earlier this month, my mother brought up us trying another one of these meal plans. We had tried Blue Apron in the past and it unfortunately didn’t really work out due to the requirements for the prep work. My mother had gotten a deal for Hello Fresh and we’ve seen it advertised enough on the web so we figured, fine, why not.

I’ve always said I have a love-hate relationship with cooking because while I do enjoy it, I find it very painful to do! I have wrist issues so stirring for long periods of time causes my entire arm to cramp up, I am terrible at cutting/slicing/peeling/anything where I would be holding something sharp, I have trouble standing for long periods of time due to two issues as a kid, and I overheat at the drop of a hat due to my tendency to easily dehydrate combined with my body tending to absorb heat. After cooking, I’m usually worn out for the rest of the day, if not longer, which kind of sucks and makes me not really want to do it– but it also means it’s not something I really can handle if I’m not at my best.

Despite that, my family tends to think I am a really good cook– and no, I just know how to follow a recipe and have a tendency to guess what goes good together when experimenting. While I have no real passion for the presentation of it, there’s something really nice about seeing people enjoy something you made. I also just genuinely love trying different dishes. For the most part, unless I’m allergic or it’s still moving, I’ll probably try it.

Because of this though, my mother wanted me to cook all the meals and as Spring has finally sprung, there was no way that was happening because I was busy dealing with my allergies at their highest peak shaking down with intent to kill and Mother Nature joining in by changing the temperature from hot to cold and back all week. As much as I have tried to get things still done, I have actually been pretty sick.

Regardless, because I usually cook the seafood in the family (especially during our Christmas dinner), my mother really wanted me to make the Bacon Scallop Mushroom Risotto which by all accounts and purposes, we should not have chosen because obviously it would take a lot of work and as mentioned, cooking is pretty painful for me, and YET… it just sounded so tasty and I love risotto and bacon so we picked it anyway. (Not the only crazy one we picked this week– my mother made the Beef Wellington which was even her pick because she wanted to try it. We are not a family who always thinks things through.)

Despite waking up feeling like death because Tree Pollen is at the highest yet today, we said we’d try and do it so my husband and I headed down to get to work. After figuring out that the little packets that just said “Chicken” were the “Stock Concentrate”, we started working getting that to a boil. 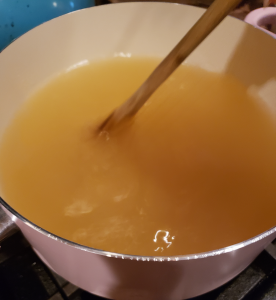 It was then onto getting the Bacon all set up. In general, I’m always a little nervous when cooking stuff like this due to risk of flying oil, so usually someone else takes care of it, but I feel like I did a good job for my first time actually cooking it myself. 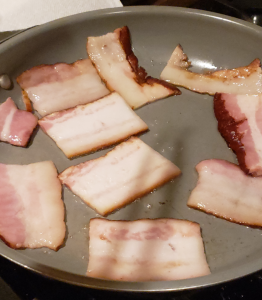 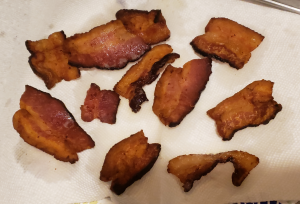 With the bacon done and my husband finished with cutting the onions and shallots, it was time for the next part of the cooking stage and the prelude to the hardest part. 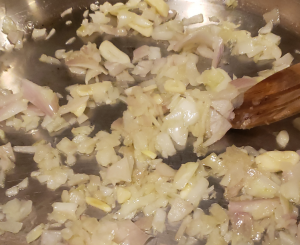 Despite knowing what to expect with cooking Risotto, that did not make it any less painful. I genuinely didn’t think I’d manage to mix all the stock in. My husband really did a better job stirring it than I did though. I had at least learned from my previous attempt at cooking rice. 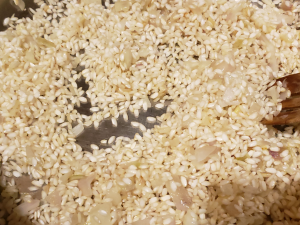 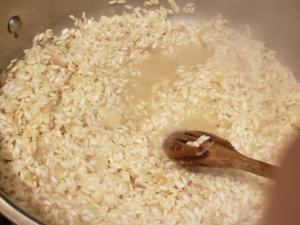 With the Risotto more or less done, we ended up working on the mushrooms (which… I also forgot to take pictures of) and then got to start mixing things in. 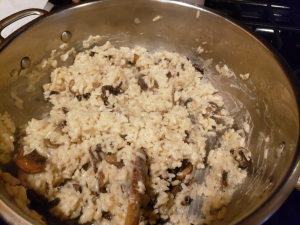 It also meant it was time to work on the Scallops. 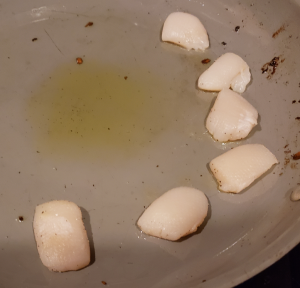 I have made Scallops before, and it pretty much instructed to make them the same way I usually do with just a few changes due to them being smaller so these weren’t too bad besides my usual cooking issues.

It was then just… mixing everything together and topping the Risotto with some more cheese, some of the bacon, the scallops, and parsley. 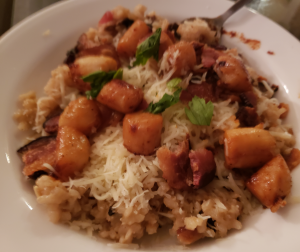 It took us maybe 2-3 hours to do, despite the estimate of an hour which, unfortunately, is par for the course for me. I almost always take at least twice as long, if not more. It did come out well, which was quite the relief, and I will say that despite my issues with all the cutting and peeling (In general, I always expect when these come with everything, that all items will be pre-sliced/cut as well which… is not true), every single thing we’ve gotten as we’ve tried them this month has been really good.

I would say this dish is one of my favorites (though I don’t know if I’d attempt making it again) along with the Zucchini and Sun-dried Tomato Panini. I also genuinely really liked the Beef Wellington and the One Pan Santa Fe Pork Tacos. The flavor has always been top notch, even if I wouldn’t personally refer to any of these particularly simple, but I suppose that’s due to my own issues when it comes to prep work.

We’ve decided to scale it back to bi-weekly instead as we can’t always keep up with all the recipes in a week. I don’t know if we’ll always keep up with it, but it’s definitely cheaper than ordering out (Grocery shopping, while we try, many stores have been out of stock and I don’t always have options to substitute). If you do think these recipes sound interesting, this is our personal referral link which could get you a discount— there are various little additions and we essentially are trying to do this for dinner multiple times a week while having Freshly as an option for Lunch (Essentially microwaveable meals, but everything is fresh).

But yes, if you enjoyed this, I may include more of our random cooking adventures besides just occasional baking posts… Though, I definitely enjoy baking more.