While it’s technically still another month before it really hits a year, as the anniversary event is currently happening, I figured I’d talk a bit about my thoughts now. If I wanted to keep it short, I’d say my feelings on the game are currently both bored and overwhelming, which may be weird as you think those would be on the opposite ends of the spectrum, but it’s about the best way I can really describe how burnt out I feel and how even the most fun parts of the game unfortunately became stale for me.

I feel like most people complain about the lack of Story content, but I’m actually okay with it. The Story is one of my favorite parts, but considering the global release and all of it being fully voice acted, it doesn’t surprise me that there’s a delay in when we see the next parts. That said, we did get more to start even in the original PSO2 on the Japanese server and I think that’s part of why people are surprised. Maybe it was weird small bites, but it still was quite a bit more even if it was shown in a confusing way. I also felt like there was more to do offhand like with Alliance/Team Bases and having a room to decorate.

As it is, due to the Battle Point system, I’m actually not even excited for the upcoming story content because I’ve been struggling leveling up due to not being able to play as much. This is partially because my husband had already gotten burnt out due to the repetitiveness of the events (which… we’ll get more into later) and New Genesis just… isn’t made to play solo unless you really want a challenge. In terms of difficulty, it reminds me of going to certain higher level expert areas in PSO2 by myself (or attempting to with the Ally/Friend system) and like, could I do them? Sure, eventually, but it wasn’t fun and very slow and just… kind of tiring after a while. I’ve mentioned before that fighting in games is always one of my least favorite parts– it’s something I find repetitive and boring to begin with so drawing it out just makes it all the more exhausting, so with NGS kind of making it so every fight feels like it requires more people to not be there for way longer than needed, it’s put me in a rough place because I don’t really want to go at it solo and most people have moved on from the quests I need to do which makes it harder to find people hanging out where I’m still working on things.

Another issue is that I’ve found Force, pretty much the only class I’ve ever really enjoyed, just… doesn’t feel as good? Obviously, it’s hard to say fully objectively between having more skills in base PSO2 and it still being kind of early, but I find myself struggling a lot with PP management partially because there’s very little reason to actually charge attacks beyond wanting to unleash something specific– you don’t necessarily do as much damage, yet it feels like everything uses a lot of PP. Making things worse, the basic attack does nearly as much as my techniques do, even when using the super-effective element.

My gear maybe isn’t min-maxed, but it’s still pretty good and I have my armor units nearly completely maxed with all good augments and a 5* Rod with good augments as well. At best, I’m only missing out on a handful of extra points I could get into things and aren’t really worth the grind (or meseta). It also feels hard to be motivated to work on them when 6-Star items will be available soon enough– at the same time, the power increase is so minimal, it also just feels kind of disheartening to have to go through everything all over and have to re-get so many augments because you can’t transfer them yet. I hate how much upgrading works in PSO2 and while NGS makes it a little less awful with how you can increase Augment ratings, it’s just… not fun? It’s grindy and very boring and I’ve never been fond of games where I have to constantly upgrade my equipment. Leveling up my character feels exhausting enough without having to add so many other aspects I ALSO need to level up and take care of.

In general, I hate having to constantly upgrade gear, but when I need to also consider extra things (in PSO2’s case, augments) and level them all up as well instead of just… a simple click of the button and being done because I finally got better version of something, it’s just an aspect of the grind I’ve never cared for and very quickly gets old for me– I am absolutely the type of player who, if I had the meseta, would rather just buy a fully upgraded item off the marketplace because of how annoying I find it all.

But what has really gotten me down are the downgrade in what my favorite part of the initial PSO2– the Events. Decorating-wise, it’s still really nice and I love seeing how Central City gets decorated. 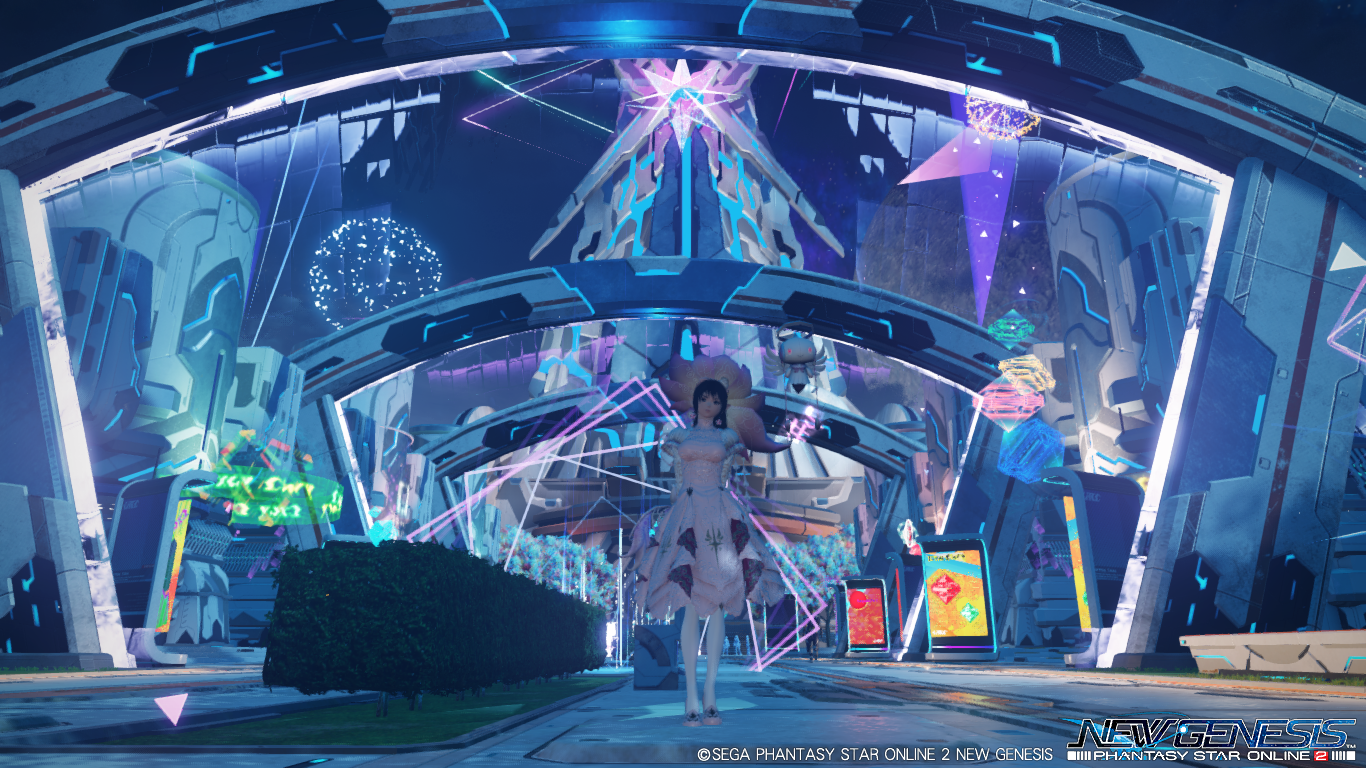 Unfortunately, that’s where most of my event enjoyment ends. The events generally consist of the following:

And honestly, it just being any enemy with a symbol on their head that helps earn points got boring very quickly. It feels no different than when I’m playing the game normally which makes it not really feel like a fun break so much as more of the exact same thing. Mischief symbols, for the longest time, were my favorite part of the event– they added a cute touch in making things more decorated and usually had a fun effect. Unfortunately, since the last event, they just… put them out in the open which… I don’t really care for?

The World itself isn’t really decorated for the events– at best, maybe some seasonal changes (so like, different tree colors), but no real decorations. The mischief symbols, being like silly hidden objects, are now just kind of spread out randomly for your Mag to direct you to and it just feels out of place and only done to make it take longer.

It just feels like permanent versions of the Stellar Grace drops which, while they do give boosts for finding certain ones, I just found boring to keep looking for. Making them look slightly different doesn’t help make it less boring. Having them only around for certain amounts of time and only being able to find so many also added to making it less fun for me.

We finally got Event maps which I hoped I’d be happy about, but they still feel lacking? I don’t know if it’s due to the Open World environment or maybe just the lack of decorations, but nothing about it feels that special which kind of bums me out. It feels no different than doing some of the other UQs in the game. At least you can do event maps whenever (though, who knows if you’ll have people to queue with) unlike the randomness of other UQs, especially when there’s no longer a schedule except for the few times when we actually get one.

Obviously, I’m sure most people don’t even necessarily use the official NGS site that much, but can I just say how… irritating I find it? I find it annoying to navigate and multiple times now, things I genuinely found useful were removed– the forums, UQ schedules, and heck, they FINALLY set up the Scratch Tickets page to be similar to the Japan one where we could see the items in full instead of just through character previews and then removed it after a weeks to just be a text list. I don’t know why the site wants to be absolutely useless, but it sucks. And I know the forum was replaced with Discord, I also know there is a fan discord that has it set up to notify when UQs go up (though, honestly, I really need to be able to plan at least a day in advance so it really doesn’t help that much), but I don’t want to constantly have to join Discords for information. One thing that was nice about forums is you could poke in and find out things without having to join and do all this other stuff or have the window want to scroll away when you’re trying to read in its infinite page chat history.

In general, it’s just been tiring. I’m overwhelmed due to being behind on some quests and levels as we keep getting more, but the grind isn’t fun, the events aren’t fun, and I still can’t even get a nice ponytail yet. It just feels like there isn’t anything to grab me to make me want to finish leveling and the general issues of soloing it as well doesn’t help. Adding in the limited time of the events where I just need to do the exact same fighting to rack up points for limited time items doesn’t help.

I always liked how silly and crazy the events in PSO2 were and how there always seemed to be people ready to help, how we could get through our Bingo Cards in a few runs, and drops could be found pretty cheap on the shop. But everything here feels so generic and I have no idea why. I don’t really have advice for it and I’m sad to not being having fun with how much I enjoyed the original PSO2 and waited so long for it to finally get here, but besides how pretty the world is, I’m already tired of exploring it. Somehow, the randomness of the maps in PSO2 were still more engaging for me. 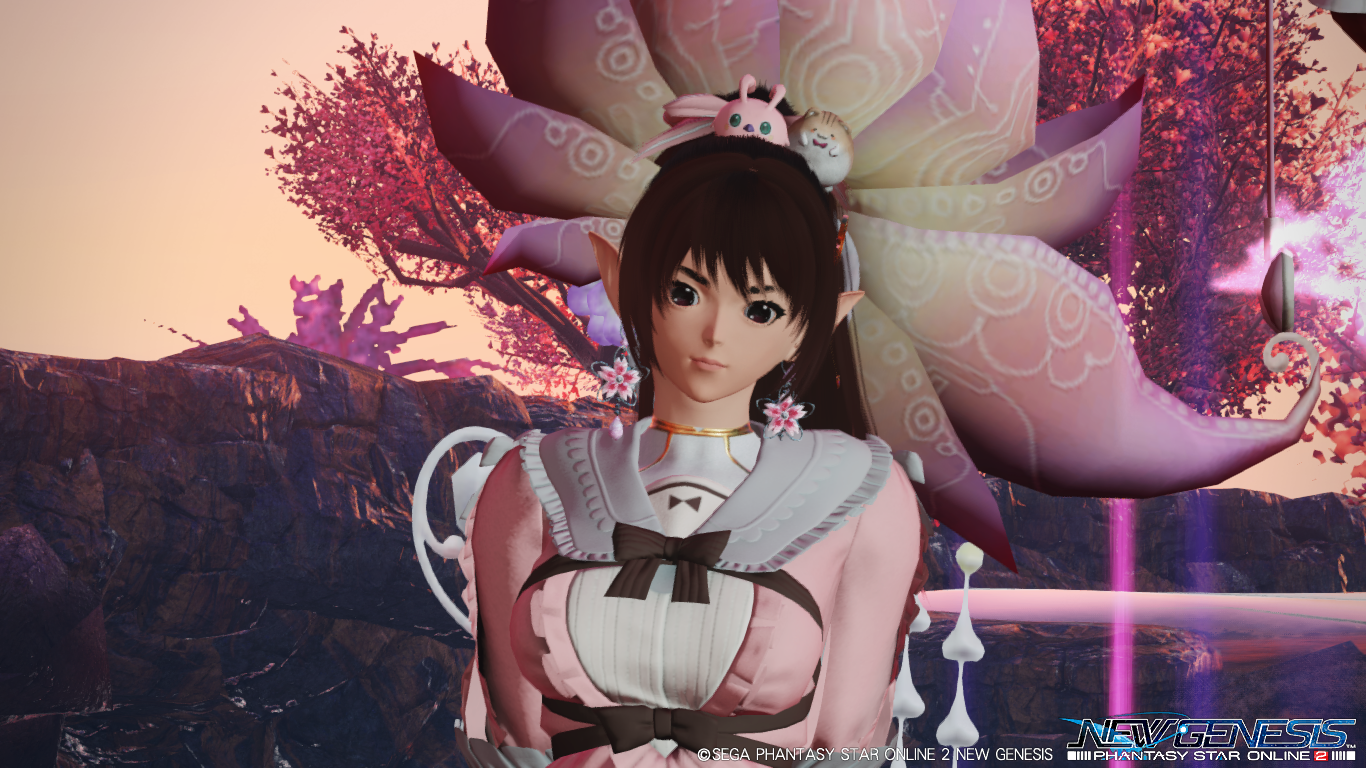