In general, when I first heard about this, I expected something similar to Sonic Runners, just made into a game on Roblox, which isn’t really my thing, but knowing Chao would be part of it, I was there pretty much immediately. (If you’re thinking: “What about the Chao on Minecraft?”– the simple thing there is I unfortunately do not own the newer version of Minecraft and can’t justify spending that much right now just for that, as tempting as it has been, because I don’t really enjoy Minecraft in general… but if I ever do get it, yes, there will be a Sonic Minecraft video immediately honestly)

I’ve never played a Speed Simulator game on Roblox (and after this experience, I probably never will again besides this one), but I actually have played some neat things on Roblox so I was willing to give this a chance. I will say that my views are definitely primarily as a Sonic fan and as mentioned, this is my first time playing a Speed Simulator game, so it’s entirely possible some of this stuff is just the norm. I also want to explain that, while I’m not a fan of microtransactions, I don’t entirely hate them if they’re used well and done fairly. The problem with Sonic Speed Simulator is they’re not. This game is so incredibly scummy with some of the paid stuff and it sucks as there’s honestly a bunch of fairly neat things about it, even if the gameplay isn’t entirely for you.

I’ll start off with the biggest positive for me: I LOVE walking around all the different levels. One of my favorite things in Sonic Adventure 1 was just walking around all the different hub areas and to an extent, that is entirely what every “level” is– there’s some Lobbies that do act like proper levels where you need to get to the big coin at the end and it’s honestly pretty neat, though, the platforming can be kind of rough depending on your speed level– the balance is absolutely not there partially due to how the game works which can make them frustrating at times. But for the hub levels themselves? It’s just a really fun time. I love seeing everything, all the Sonic models look great, and I am genuinely excited to see future Worlds added. If an actual Sonic game made it so you could pick to just… explore after finishing a level where there’s no enemies and you can just enjoy the level for what it is, I would love that. 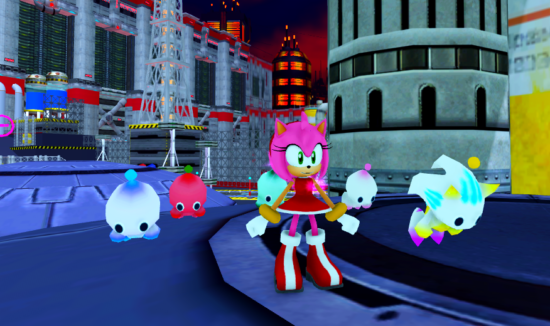 The music is also pretty great, as you’d kind of expect from a Sonic game, and each level even now features a different song remix. I would say my only complaint here is that the looping isn’t great and sometimes the music literally just fades out and it’s like someone hit replay again after realizing there was no music playing. It’s not really enough to be jarring, but just fairly noticeable.

The problem comes with how things unlock and how Chao are used. Now, obviously, I love Chao and would absolutely be all for more interaction with Chao, but I’m actually okay with them just being floating pets. The number of colors they’re adding is really neat as well and I just, I love Chao so much, okay?? Unfortunately, Chao have stats. And yes, they have stats in the game too, but those stats are for how they perform in a single player minigame mode for your Chao, not buffs for your character. Considering there’s Races against other players, which you need 25 wins to unlock World 6– Chemical Plant, that already is pretty sketchy, but you may think, well, everyone is on the same playing field though, right? Just people who play more will have a bit of an advantage.

And for a while, that was definitely the extent of it, but it still would cause an issue if you just… got unlucky and all those people who are playing way more than you are there and ready to completely wreck you in this race because, for whatever reason, you can’t play as often (*stares at Star Stable Online Championships :|). Chao already had an issue of certain colors just being rarer and then starting with a higher base line of Rings and Experience they could give you. Evolving a Chao requires you to get 5 of the exact same Chao. You can evolve a Chao 5 times so you need to 25 to evolve it to its maximum potential. Chao are primarily gotten through Vending Machines which are just… a 1/6 chance Gachapon machine. It’s not terrible, they do use Rings (though, some of the more expensive ones are 200K+ Rings a pull…), and with the exception of like two times now, I usually have been able to get what I hoped for pretty quickly. The other way Chao were gotten is through limited time events– sometimes a Chao would only be around for about 2-3 days and cost a lot of rings (the first was 350K, the rest have been a Million, yes those prices do suck), other times you could earn them while working through an event for a Character Skin such as the Chao you could earn from Amy’s and Knuckles’ recent events.

Unfortunately, they couldn’t stick with keeping things somewhat fair because they had to full out make some Chao just… cost Robux. Robux is Roblox’s premium currency– it’s $5 for 400, $10 for 800, and $20 for 1,700 (If you’re subscribed to Roblox which is about $5 a month, the numbers because 440, 880, and 1,870). A premium paid for Chao costs 499 Robux*. About $6 I would say. Or you can get a pack of 5 for 1749 Robux– about $21. If you want to fully evolve that Chao, then you’re going to be spending around $100. Not to mention if you wanted 3-5 fully maxed out ones for using… Even if it was a Chao I absolutely loved, I would give up the idea of ever evolving it immediately at that price point. I’d just take the one by itself. These Chao also, like other limited time Chao, only stay for a few days at a time and then they’re gone. Who knows if they’ll come back. The other ways to earn Robux besides buying it, are either building an experience and having stuff for sale for Robux, selling items you designed, or getting some each month for being subscribed.
* The first pay for Chao actually was 600 Robux and did not have a discounted bundle of 5. To fully evolve it would have required 15,000 Robux.

Please keep in mind some do vary slightly and so these amounts could be slightly off.

The only Chao that comes close to the Robux-costing Chao is the Collectible Special Chao, which is currently just the Green Hill Master Chao which requires you to get all 19 Chao in Green Hill zone. You have a limit of 20 Chao unless you expand your inventory for them– a price which goes up each time. You would literally need to not have gotten Chao from any other area AND managed to get the Chao you needed without doubling up more than once to achieve that. Obviously, you can delete Chao (but that hurts my soul) and of course, the Chao Garden had limits in the game, but besides collecting one Normal, one Dark, and one Hero Chao, you didn’t really NEED to have every single possible Chao… but that annoyed me in the Sonic Adventure games too. If you’re going to have different Chao, at least let me have one of each color XP

Regardless, since you can only get the one, you can’t fully evolve it with means it still can’t get to the full potential of a purchased once. I don’t even min-max Chao– I just use my favorites even if that costs me against certain things, but if you encourage collecting and/or have a PVP feature, this comes off really really scummy. And Sonic Speed Simulator does both of these things. On top of that, you have to buy a pass to have 5 Chao following you, otherwise you can only have 3. If it wasn’t for the PVP features, I could at least maybe argue, well, it’s just to progress faster, but progressing faster is kind of important when you’re required to win Races for things.

The game also features a Rebirth system which essentially stalls your level cap unless you buy the Unlimited Levels Pass… Unfortunately, even if you buy that pass, you’ll still need to use the Rebirth system despite it saying it’s to not have to deal with the rebirth system because most worlds (and their respective lobby that you need to complete) require Rebirths. This blows my mind because if they just had it so you required levels instead, then this wouldn’t even be an issue. I’ve seen people bring it up to the Developers with no response and it’s probably one of my biggest issues. The entire pass feels like a scam.

It’s just kind of frustrating as there’s many ways they could make money (such as some of the avatar items sold in the level) without it being things that cause the game to be pay the win. I had hoped with it being a licensed game, maybe it’d be done fairer, but there’s just so much scumminess with how it’s balanced and the limited time for how grindy the events are that really bring the game down. I know Roblox games can have stories (unless maybe it’s a faux pas with Speed Simulators) so I kind of wish they felt more like… levels and storylines as you play and not random limited time event for a while.