I’ve been asked a few times now if I have heard about the game since I haven’t really mentioned it much and if I planned to play it. The answer to both of those questions, at least for the moment, is Yes. I love Disney, Disney Magical World is one of my favorite games, and this really feels like the next evolution of that, despite not actually being associated with the same series. (Yes, they’re both Disney, but DMW aka Disney Magic Castle: My Happy Life had its own things before the 3DS game and has even continued into Arcades with a Rhythm game since 2) Regardless, since I’ve been asked quite a bit now, I figured I’d at least talk more on my thoughts about it.

With the game opening up Early Access this Summer which is pretty close, I’m hoping maybe during one of the conferences happening this month, we could get a date (or even a surprise “Available now!”). I’m also hoping the Founder’s pack prices won’t be too expensive– I’ve seen too many games have founder’s packs that end up being very expensive due to tacking on tons of premium currency. Considering Disney Dreamlight Valley, despite being free to play in the long run, has said that their microtransactions will only be for expansions and vanity items, I’m hoping it’ll be a lot more reasonable, or possibly even just one tier with just a set price and nothing more. I’m just not a fan of exclusives, especially if limited time.

That said, without any known price-points just yet, I am curious how it’ll be done. I feel like a lot of people consider vanity items an easy thing to shrug off, but for me, customizing my character is a big deal and I absolutely have more fun when I’m satisfied with how my character looks. They’ve already shown neat furniture and clothing I’m really excited for, especially as a huge fan of Tangled and the color pink (Always happy to see lots of pink stuff), and we know that there is a shop in the game as well, but what designates and item to be a microtransaction or just something in-game? And will it be like… $1-$5 for an item or bundle or more like $10-$20? 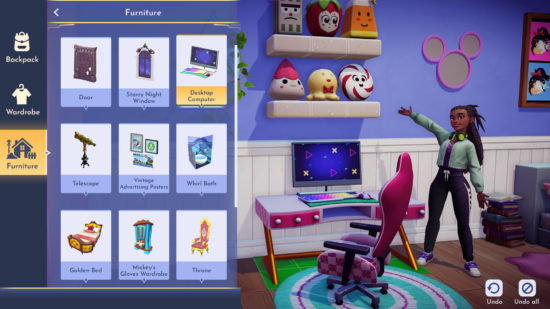 When it comes to solo games (IE: Anything that lacks any competitive or PVP aspects), I actually don’t mind if there’s microtransactions to speed things up or help a player along, assuming the game doesn’t feel like you need to constantly be tracking timers (IE: I need 5 of Item A to make 2 of Item B which I need to finish a Quest but I only have *insertthismuchtime* and I need 5 of Item C and 5 of Item D as well to make Item A and etc.). I’ve played games where I’ve gotten them and I’ve also played ones where I haven’t, but sometimes it’s nice to have the option.

Expansions I’m also completely fine with being a thing, but I hope not every single addition will be added to expansions. Bringing up Disney Magical World again, one of the reasons the second game fell a little flat for me was because so much was the same as the first game beyond a few new islands that really could’ve been expansions like the Pirates of the Caribbean World. I’m just curious how much these will cost, how big they will be, and if most worlds will be expansions or just some while there will also be plenty of worlds continuing to be added in updates down the line. Disney Magic Kingdoms, a mobile game also made by Gameloft, features tons of characters from the movies, many of which I wouldn’t have expected to see included such as Cinderella’s Stepfamily. Of course, there’s also characters not in that game yet that I’d love to see and hope will be part of Disney Dreamlight Valley such as Webby (They name the section in DMK with Scrooge, Dewey, Huey, and Louie “Ducktales”, yet don’t have Webby or Launchpad at the least. I would love to see Della and Mrs. Beakley as well) and well, I was going to say The Rescuers, but apparently an Event for the Rescuers just started in DMK earlier this week and I am thrilled about it.

The Rescuers is probably one of my all-time favorite Disney movies (with Tangled and Beauty and the Beast being my favorite Disney Princess movies– partially due to how much I relate to Rapunzel and Belle) and I just adore Bianca so much. Obviously, just because characters are in their mobile game doesn’t mean they’re going to be in DDV and I’m not trying to imply that’s the case, but it gives me hope that they could solely due to Gameloft remembering them in the first place. I’m also really hoping for Winnie the Pooh as well which is another series I really love– I feel like it’s essentially a given, but as we haven’t seen too much just yet, I don’t want to get my hopes up just incase.

At this point, I know there’s cute pink furniture, I know there’s pretty pink dresses, I know some of my favorite characters will be there, but I think the things I want to see most at this point are, from a customization standpoint, more hairstyles (come on, wavy/curly ponytails), and more generally, full gameplay– we’ve heard about the same demo gameplay from various news sites, but have only really seen trailers and some stills of rooms. With Early Access hitting so soon, there’s so much I’m just kind of sitting and waiting to see. I mean, I love every sneak peek that pops up, but that doesn’t mean I can’t hope to see even more, right? I know I’m also hoping to see Duffy and friends in the game, even if I may be in the minority of that. While he’s more well-known in the Japan side of things, I feel like he still has some popularity here as well. I’d love to say Unibearsity as well, but I know that never came overseas and I’m pretty sure most people who know about them here are due to the plushies in Disney Magical World and not due to importing them like I did.

I would say if I had to describe how I feel about the game right now in a few words, it’d be “cautiously optimistic”. Despite that, I’d be lying if I said I wasn’t excited. The game has been frequently compared to Animal Crossing and various farming sims and well, that’s essentially Disney Magical World too so I feel like this has a really good chance to be a lot of fun. Either way, once Early Access hits, I hope you guys will be excited for the Game blogs and Let’s Play videos to come along with it :)