Even though I’ll call it the week, anything else from this month will also be added to this post.

I hadn’t realized The Big Con’s Grift of the Year update released so I’ll definitely be trying that out. I really enjoyed the game even if I wish there was another option at the end.

Passing Waters looks really cute. It Kickstarter going on right now and I noticed it has no digital/vanity item Kickstarter exclusives so I backed it immediately.

Paranormal Detective tempts me every time I see it, but it requires VR :(

I see why LEGO Bricktales didn’t have its demo up yet. I’m happy I was finally able to check it out.

I know not too much game-wise was shown, but it was still a really fun show to watch. There’s genuinely so many LEGO Sets I’d love to get if I could afford them.

There didn’t end up being too much else, but I think it was still a really fun month regardless. If there turns out to be any last minute things, I’ll update this, but otherwise, I guess that’s a wrap :)

Edit: Of course Nintendo puts their thing super close to the end of the month!! So, to finish things off, here’s our last section:

Lorelei and the Laser Eyes looks really neat, though also a bit haunting. A very cute dog too.

Super Bomberman R2 looks fun, though, I kind of wish it had more maps like Super Mario 64.

Blanc looks very pretty. I love the art style, but I feel like the story may be sad and I don’t think I can deal with my heart breaking. Let them be happy T~T

I’ve actually never played any of the Monkey Island games, but I kind of really want to try them all out at some point.

Disney Dreamlight Valley continues to look really great. I’m sad Early Access isn’t until September 6th– I really hoped for it to be sooner, but still looking forward to it. Impatiently waiting for when we can just get the Founder’s Pack. Regardless, I noticed a cute coat called the “Lacy Pink Coat” in the trailer which I hope may also have a nice dress in similar colors. I also really loved this hairstyle and hope maybe a longer version of it will exist as well.

I was kind of surprised WORTH LIFE wasn’t shown as it’s releasing exclusively on Switch and just got a new trailer yesterday, but maybe it’s because it’s releasing in like 2 weeks.

Meanwhile, on the Japanese version of the Mini Direct, they showed this fishing game which looked really cute? I have no idea what it is, but I kind of hope it comes over. 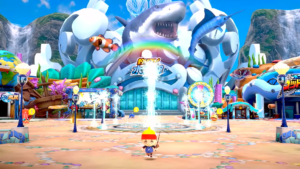 RPG Time: The Legend of Wright was also shown which I recall seeing before so surprised it also wasn’t included in the English version.