It has been a very busy season for games and it’s not even close to being over. I’m still terrified for the 21st, although, I’ve more or less had most of my hype for both games be knocked down quite a bit. There’s still stuff I’m looking forward to in both, but it’s a weird feeling to be both excited and disappointed at the same time.

I’ve already explained quite a bit about my large disappointment with Omega Ruby & Alpha Sapphire so I won’t go into it again, but I’m sure there’s a large amount of people wondering “What’s wrong with Smash Brothers?”

Now, I’ll be honest, I’m not great at the game. A lot of my fun likes in tossing Pokeballs around, exploring the stages (I love stages that change because there’s so much to see), listening to the remixes, taking pictures, and playing with the trophies. I don’t really play many matches with friends–I mostly expect to use Amiibo quite a bit honestly.

Despite that, the game has even more challenges and I struggled really hard with completing the challenges in the 3DS version so I could have all the trophies: 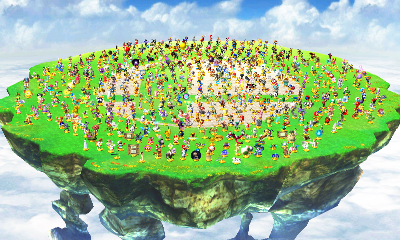 And save up lots of coins. And then I learned that the only thing you really transfer to the Wii U version is your custom characters/move sets (even though you will need to unlock all the moves again I suppose). And I don’t know where I got the idea that you’d be able to transfer what you got from one to the other or that it’s how you have all the stages in both versions, but that was the mindset I had and from what I can tell, it’s not going to happen. And then a large part of me is wondering why I bothered getting the 3DS version in the first place.

I will say right now that graphics have nothing to do with me saying that–I really could care less about graphics. And it’s not that I don’t like anything from the 3DS version–I think many of the 3DS stages are neat for example. But I found Smash Run fairly disappointing–I’d like it more if I could explore freely, change the time, lessen opponents, play online, etc. But it mostly feels frustrating and I just do not find myself having fun with it. To be honest, I don’t really like the equipment stuff as it is.

The StreetPass mode also gets boring rather quickly and after the first few times, I ended up no longer bothering to even clear it. The 3DS version also made it so I couldn’t even play the way I enjoyed the most which was with a ridiculous amount of Pokeballs as it didn’t feature item frequency which made matches go incredibly slow because items were set at the same rate based on what they were. And other than the stages themselves, everything else is included in the Wii U version with even more content (such as being able to play with a friend in Trophy Rush).

I don’t necessarily regret getting the 3DS version, but a large part of me is wondering what the point of it was to begin with? I expected so many connection things besides just fights with specific moves and being able to use he 3DS as a controller. And because of the 3DS version, some fighters even were excluded due to issues. (Of course, we can still hope they will return later like Mewtwo)

I mean, maybe I heard wrong again and you can transfer progress. But who knows. I just know I feel really down about it right now.

I also think I’m just being overly critical due to stress which just how much there is and how much I still need to get done. As it is, Animal Crossing completely broke my spirit so I’m taking a big break from the game for now, I’m still slowly trekking through Tomodachi Life and Disney Magical World with not the greatest luck, LittleBigPlanet 3 comes out next week and I’m not even sure if I should get it yet between again, just how much there is, and also because I do not have all the extra DLC content in LBP2 completed. There’s also a few DLC items I still would like to get and haven’t yet. I wish I could find a good database that lists all the items with pictures from each pack so I can see if I care enough to really go out of my way to try and get them right now or not.

We also ended up getting Sunset Overdrive which is a lot of fun even though I am absolutely terrible at it–of course, with my awful aim, it’s not really a surprise I am terrible at it. They even had my hair which was very exciting:

I do hope I unlock a nicer outfit sometime soon though.

I would say my only disappointment is that the “censored” mode is just… not very good bleeps. I went into it not even thinking there would be a way to turn off swearing anyway, but I also didn’t expect as much either. I don’t really mind it too much though–while swearing is not my kind of thing at all, most people I know do it so I have to hear it. A lot. It’s still a bit odd though since it’s the whole “the hero is you” and I’ve never sworn in my life so seeing the…words that come out of my character’s mouth tends to be a bit awkward.

Anyway, I’ve mostly been playing Fantasy Life. I still have some other games to play like The Lost Valley which finally arrived, but I just haven’t had time to really get into the game yet. I’m a bit sad they do not have character customization considering all the farm customization you’ll be able to do, but oh well. Maybe it could be DLC.

Fantasy Life is an interesting game in the sense that most of my disappointment is towards myself. I just feel so slow and bad at the game and I’m not really sure what I am doing wrong. Seeing people who played less time than me/doing the same things I’ve wanted to so much faster really makes me wonder where I’m going wrong. While I’m a little down that the outfits and hairstyles I really liked weren’t available, I still have found some stuff I really like.

I was hoping to finish it before the 21st, but right now it doesn’t seem likely unless I do some hardcore leveling. But yes, hopefully I’ll get an entry up later tonight… I’ve been working on it, but with so much to take care of, it’s been going slowly :(