I don’t usually make full unboxing posts about anything I get in the mail, but I wanted to make an exception for the CCS figures. For whatever reason, Sakura is actually getting a Figma as well–though, it’ll be about 2 months before it comes out. This post is about SH Figuart version that came out this month. I’m hoping to make a brief comparison post once the Figma is released. 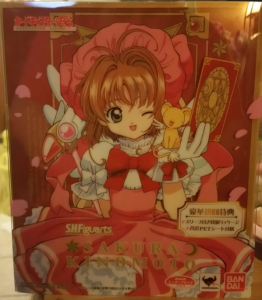 Anyway, here is her box! The Figuart is based off Sakura’s outfit from the very first opening: 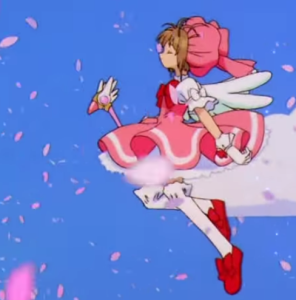 If you’d like to see more about the figure, feel free to click below to keep reading.

The box is actually really nice. It has a removeable cover to start: 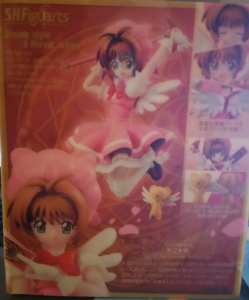 Which actually blends nicely with the box itself. The removal of the cover removes the entire back, the cherry blossoms on each side, Sakura’s name, and the picture of Sakura in the front.

As for how it looks once it is removed, well: 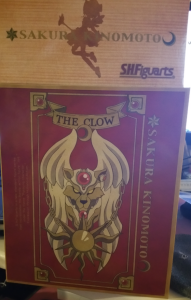 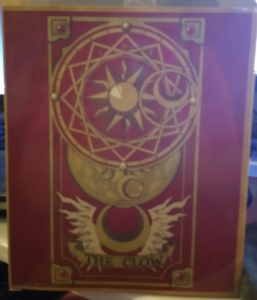 The front even opens up: 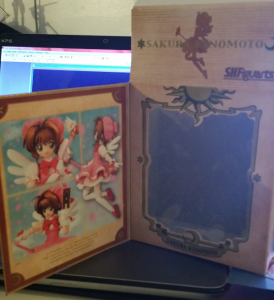 Going past the box, she actually comes with quite a bit: 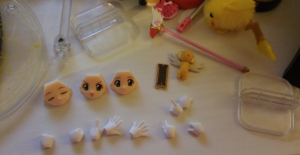 The 3rd face is actually the one she will arrive wearing, but I switched it out for her more cheerful one: 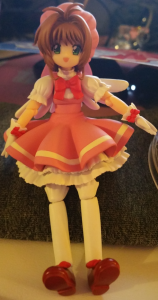 She’s really cute, quite poseable, and well-made. It’s also very easy to switch out her hands and face, though, I find it’s kind of easy to also knock her hands off just while trying to get her to hold something.

I only have two real issues with the figure itself–for whatever reason, her right leg is very loose for me. Sometimes just picking her up will cause it to fall off and it fell off about 10 times just in the process of taking pictures. It’s not broken at all: 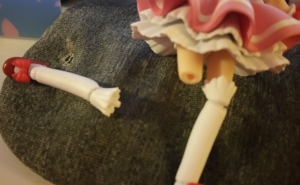 My other issue is the backside of her sleeves–due to the joints, it’s actually “opened” which looks… really awkward to be honest: 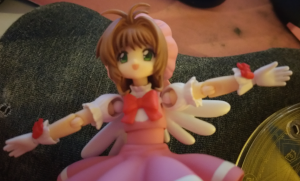 I just wish they found a better way to do them because I find I don’t want to pose her in any way that would show those as it just looks really weird.

Moving back towards what Sakura comes with, here is a back-view of Kero: 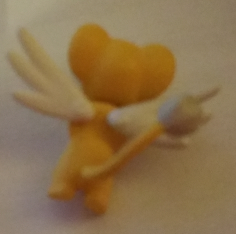 Kind of like Sakura’s leg, his tail is very loose… however, I had a hard time getting it to stay to begin with. After this picture, I wasn’t able to get it to stay again. I’ll probably try more later, but it was just really frustrating. His tail is made of a bendable plastic though which allows for some posing.

The stand is beautifully detailed: 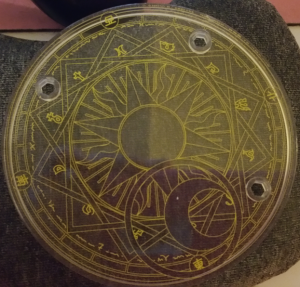 Plus there’s this lovely artwork you can put in the background stand: 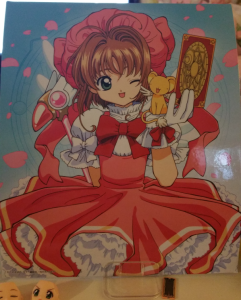 And if you get one of the First Runs of the figuart, you also receive one other background + background stand and a beautiful handkerchief: 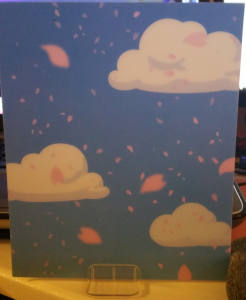 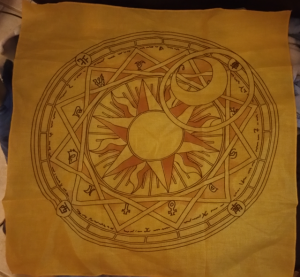 Sakura can stand by herself: 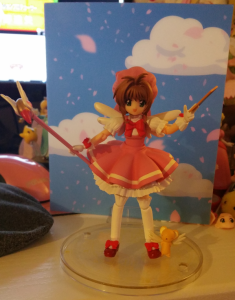 Kero might be able to if you have a better time with his tail than I did. 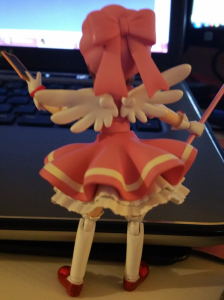 Her wings are also poseable and they really did a great job on all her outfit’s details.

And finally, here is the back of the Clow Card: 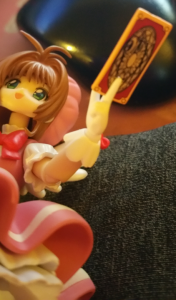 I do not know why the front of the Clow Card is blank–I think it being Windy or Fly would’ve worked nicely, but oh well.

Besides that, I was a little sad to see no mention of Tomoyo on the box (or well, at least her last name–Daidouji (大道寺) due to the fact that her mother runs/owns a Toy Company. I just think it’d have been a fun Easter Egg (especially as according to the Tomoyo Video Diaries, Tomoyo is the one who made the first opening (and probably the others) as well).