You can check out my twitter for some live reactions and if you haven’t seen the Nintendo Direct yet, check it out below!:

Sadly, neither of my two biggest hopes were announced which I am pretty sad about. The Nintendo Direct was still pretty awesome, however, so I find myself very… conflicted on how I’m feeling. Regardless, I’m still hoping they may happen at E3 then and if not… I guess I’ll have to give up hope :(

Moving onto what WAS shown at the Nintendo Direct, there was a lot of neat stuff! As usual, I will not cover everything and mostly stick to what caught my eye/excited me personally.

The stream started off with the very exciting Mewtwo reveal! I loved the “Mewtwo strikes back” entrance. Looking forward to downloading him on the 15th! And if that wasn’t enough, they further expanded it with:
-Lucas! While I’ve never played Earthbound (or any of the Mother games), I was sad to see him go so it’s nice to see him back! I really hope this means we could see other DLC characters–both new and old (such as Ice Climbers). The fact that we can even vote for a character is amazing! Also, “Lucas comes out of nowhere” was amazing. (And I loved the music during the whole montage of Ness up to showing Lucas off. Both songs were great)
-New DLC costumes! I hope this is only the beginning. I plan to buy the bundle and I hope we could also see new color variations as well.

Then more Smash Amiibo! First of all, JIGGLYPUFF IS PART OF WAVE 4 OF SMASH AMIIBO YEEEES:

We need to get Charizard, Robin (x2), Lucina (x2), and Jigglypuff T~T Jigglypuff looks a little odd, but I’m hoping it’s just the angle of the picture. And we finally have a date–May 29th! I wish I knew why it was so late though–isn’t Japan getting them like a month earlier? =( Oh well. We also received information for the next two waves!:

Thankfully, there’s less we want between these… Hopefully preorders will go well for them. And preorders will show up for Wave 4 already. I really hope none are store exclusive. I will cry. I am really confused by just how stretched out our dates are from when Japan is getting them–that’s really weird to me. Especially as the NFC Chips aren’t region locked. :/

After a hype inducing start, Amiibo tap was announced! I generally like anything showing off Amiibo so I found this pretty cool, even though I’ve played most of these games already so I don’t know how much I’d use it.

The Mario Maker Anniversary trailer was awesome. It’s a shame it was pushed back again though.

And the thing that ended up getting my attention the most thus far: KNITTED YOSHI AMIIBO:

LOOK AT THEM. LOOK HOW CUTE IT IS IN THE GAME: 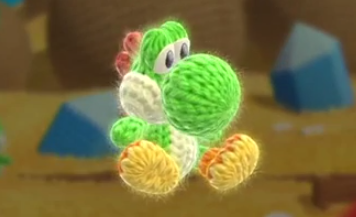 LOOK AT IT. I NEED THE PINK ONE. AND POSSIBLY ALSO THE GREEN ONE.

Splatoon is still a game I am rather undecided on (and I think I’m one of the few who feel that way…). The Amiibo for it look adorable, but I think it’ll end up being about the customization options and how stats work. I’m not that great at shooters and stat-based customization really bothers me (And is one of my least favorite things with Mario Kart 7 and 8. 8 also has the awful battle mode though :( ). If I did get one, I’d probably just get the Inkling Girl.

Pokemon Rumble World! I really love the Pokemon Rumble series, but was let down with the arena style of Pokemon Rumble U. I’m happy this seems closer to the first two games, though, I have mixed feelings on the Free to Play Element. Like Pokemon Shuffle, this is a game I’d really love to just keep charging through and having to wait due to pay blocks it super frustrating. But there is Mega Evolution and that means Mega Audino and I really wish they were still making those cute Pokemon Rumble NFC Figures. Despite my free to play worries, it looks a lot of fun and I’m really excited.

Then NEW STREETPASS MII PLAZA GAMES :D Yeeeeees. Except now I’m even more upset that I haven’t beat Mii Force yet… I hope I can beat these new games. I’m a little sad the second one is zombies (oh zombie, phobia…) but they seem cartoony enough that I miiiight be able to deal. Maybe. The Angler game seems to be more Collection-based like Flower Town while Battleground Z seems like a combination of the other three. I also think the VIP thing seems pretty neat! And yay for more things to collect beyond just countries. I really want to go out and StreetPass more. I’m looking forward to April 16th! Heck, mid April seems like it is going to be crazy with all this DLC content.

I’m not really sure how I feel about the new Fire Emblem. I think the new player characters seem cool: 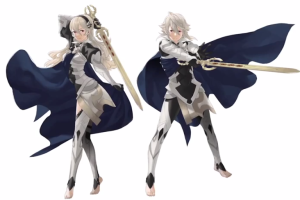 And we can customize them which is always nice! But I have mixed feelings on having to pick a path choice. It seems there are two games in Japan while here it will come with free DLC that has the other story. Regardless, having to betray people and stuff just makes me super upset. I want a “Let’s all be friends” option. I do wonder if relationships will be in this game too though.

Next was our first look at Amiibo cards!:

THEY ARE SO CUTE AND I NEED THEM ALL. Especially considering the lovely game they are for–Animal Crossing: Happy Home Designer looks so cute. EVEN THE LOGO IS CUTE:

LOOK AT IT ALL: 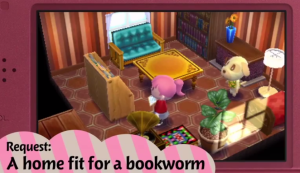 You can even have a party with the cards and decorate for them T~T: 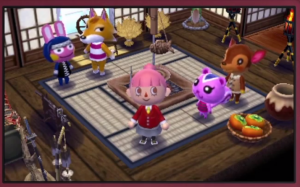 I hope you can use your character from New Leaf for it. Or create one. I’m so excited for Fall T~T I am disappointed that the NC Reader has been further pushed back until Fall: 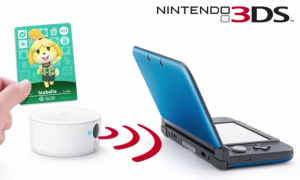 At least it’ll be out for the game, but I really think it should’ve been out this month or next :/ Or Summer at the latest. Meanwhile, it sounds like Japan will be getting both the game and the NFC Peripheral this Summer T~T I wonder if that will be region free…

Finally, the trailer for the Mario Kart 8 DLC! And it’s even coming a month earlier than expected–April 23rd! :D 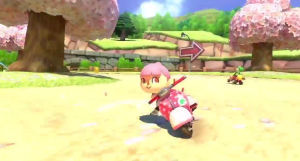 PLUS WE CAN PLAY AS FEMALE VILLAGER! YAY! Now I have 4 characters I will be unable to decide who to play as. The Animal Crossing course looks amazing and I love that the seasons change.

Also new racing suits for your Mii by using the Mega Man, PAC-MAN, Sonic, Toad, Wario, Villager, Rosalina, Bowser, and Olimar Amiibo! I’m mostly interested in Villager’s and Rosalina’s, but I don’t think they will beat out Peach’s as my favorite (with Kirby in second). Turns out they did show them off in a separate trailer!:

None beat Peach for me, but they are all pretty cool! Rosalina’s makes me think of Wish Bear (yes, from Care Bears. Shush).

But yes, that’s all for North America’s Nintendo Direct! As for other Directs, I’m still pretty interested in the next Ace Attorney game!:

Really hope it comes over.