Every so often, my mother enjoys picking up something randomly and then dropping on me that I’ll be the one cooking it. Never asks–it just happens. It’s not so much that I necessarily mind cooking, but I kind of stress out and I’m not very fast and I’m still in the process of learning exactly when you start something.

This time, she bought a Pork Shoulder–my boyfriend loves barbecue and pretty much celebrated because pulled pork is one of his favorites. He requested me to make Macaroni & Cheese and Corn Bread with it–while I didn’t have enough time for the latter (which I guess works since my mom picked some up on the way home), I made sure to at least do one of the things he wanted. And he was still pretty happy about it judging by his plate: 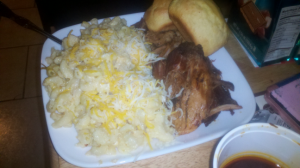 I usually use the same Mac & Cheese recipe, but often use as many cheeses as we have in the house because I love cheese. One of my favorite foods hands down.

Of course, since everyone liked it so much that means this kind of surprise will probably show up again sometime soon for me to cook…

I’d like to make some brownies sometime soon though so maybe I’ll look into that when I have time.