I didn’t expect things to be so crazy ahead of time, but out of nowhere, things just got really busy. Here I was, just preparing for E3 streams, setting up things for future posts, and even trying to figure out where some would be more fitting (please vote if you haven’t yet!) when I actually received the opportunity to go to E3 which was exciting in itself. To receive a response of actually being able to go, I was ecstatic and thus, all plans began. I have not yet decided if I want to focus on writing or videos while at E3 (I may do both), but I’m just so happy I get to go! I hope we might be able to stop by the Nintendo Championships at the Nokia Theater as well. I’m still trying to figure out how I should prepare more, what to bring, where to go, what I have access to (probably just the showfloor but still!)… Regardless, I’m super excited.

As for yesterday’s excitement, it was the Pokemon Symphony! 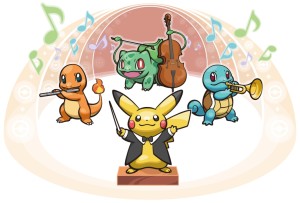 I had been wanting to go since the day it was announced and was super sad I couldn’t try to go to Pokemon Worlds last year to see it (we just had too much happening at once). It would’ve also been my first time going to Pokemon Worlds–I don’t know if I’ll go this year (Boston is further away than DC and we have a lot going on this year with Wedding plans), but I hope to go one day.

This was the second time I’ve been to one of Nintendo’s symphonies with the first one being the Zelda one (Symphony of the Goddesses). The one thing I’ve realized while I generally love a lot more Zelda music than Pokemon, Pokemon is a stronger game of my childhood so it was two vastly different experiences in a way. Both times though, we’ve been kind of unlucky with where we sat… Our seats themselves were great: 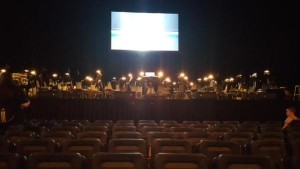 But most of the people around us were… iffy. While we just had people behind us in the Zelda Symphony talking annoyingly behind us the entire time, this time we had two people in front of us who like encouraging people to start screaming at the screen for Who the Pokemon was which encouraged the little boy behind us to start screaming in our ears with who was on the screen. It was fine when people were saying it, but maybe be polite to the people around you? Just saying.

I will say one thing we had to deal with in both symphonies though were people who felt the need to start cheering while a song was going. And just… if people are going to the symphony–they want to hear the music–not you cheering and whistling. >> It’s one thing if audience participation is asked, but it’s another when someone just feels like cheering loudly because of what song it may be.

Moving on, one thing that surprised me is I didn’t feel as connected/strongly about any songs from the first generation. Kanto & Johto are generally the regions that strike the most nostalgia for me for many reasons, but when it comes down to it, a lot of my favorite songs from those regions are ones that stayed around like the Pokemon Center theme and the Bike theme (though, that has changed up a bit recently unfortunately). I didn’t expect the first song to really grab me to be the Routes of Sinnoh which I found really beautiful. That isn’t to say I didn’t like anything from the earlier gens–Ancients of Hoenn and Falling Ashes were nice. I also liked Ecuteak City and Born to be a Champion. And Pallet Town is always nice to listen to.

Similarly, despite not being a big fan of N, I really enjoyed Farewell and N-counter: 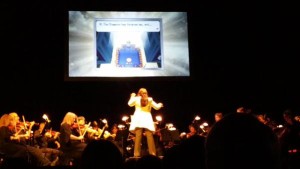 I was very sad my favorite Black & White theme was not included though: The Rival Theme. Similarly, I don’t think anything was included from Black 2 & White 2 and I would’ve loved to hear the Champion Iris Battle Music.

And when it came to X/Y, An Eternal Prison made me cry. Of course, they did show the same scenes that made me cry in the game which may have added to it. In general, I really liked all of the music used for Gen 6/Kalos which surprised me as beyond certain features (like customization), the region itself wasn’t too special to me.

I was so excited for the two bonus songs though. “Gotta Catch ’em All” while not being my favorite opening is still very special to me and I love hearing it. I was surprised that so few people sang to it and even more so, it felt like maybe less than 50 people even knew the second verse. So, here it is for all of you who did not realize the first opening has a second verse:

Every challenge along the way
with courage I will face
I will battle everyday
to claim my rightful place.

Come with me; the time is right
There’s no better team.
Arm in Arm we’ll win the fight
It’s always been our dream.

After that, Kiseki started which is easily one of my all-time favorites (and always makes me cry). It was so nice actually getting to hear it be sung. I really want to hear it in all the different languages in a beautiful medley of awesome and unity. And each version separate. And just, we need a CD for the Pokemon Symphonic Evolutions that also includes that. Thank you. :P