So, it is the second day of press conferences! Before I start, I did want to mention that I officially got my E3 Pass today!: 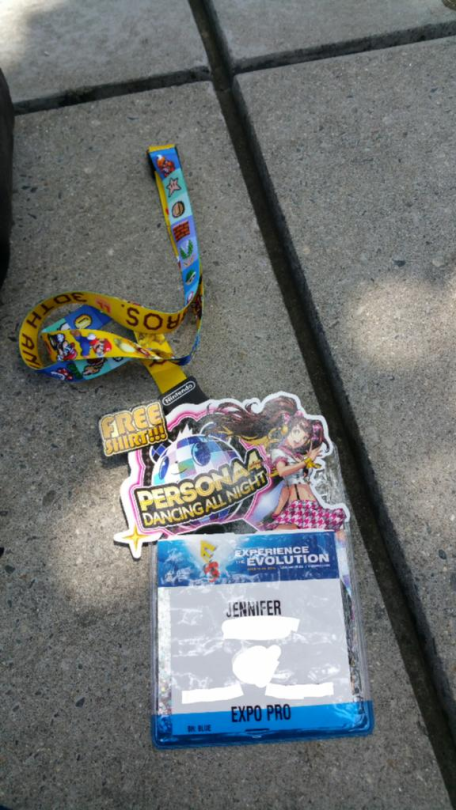 I absolutely adore the lanyard. We also took quite a few photos of of the Los Angeles Convention Center’s exterior all set up. 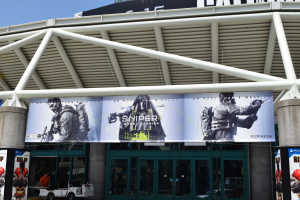 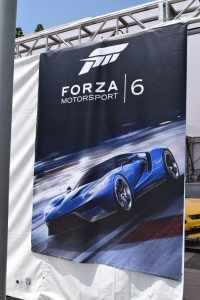 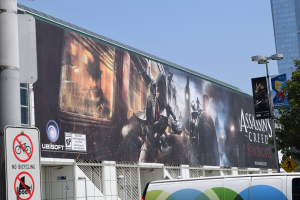 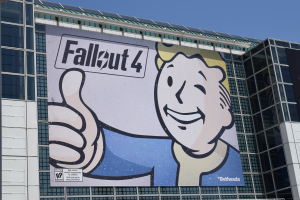 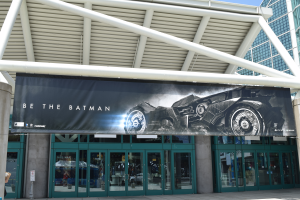 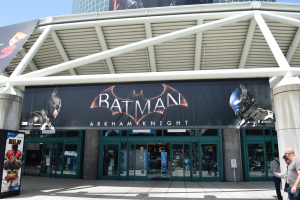 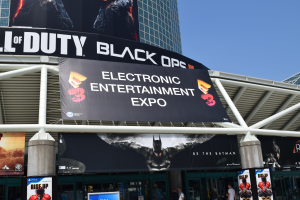 I look forward to taking lots of photos inside tomorrow!

Getting back to the main subject, I know I didn’t say anything about Bethesda yesterday, but there really wasn’t anything more for me to say beyond what I said on Twitter. I’ll admit, I wasn’t expecting to have much to say for Microsoft either, but I was still pretty hopeful as my Xbox One is kind of lonely when the only gave we have is Sunset Overdrive.

While only a few games caught my eye, I think the biggest thing was with the features announced such as backwards compatibility (although, it seems to only be a certain amount of digital games right now–really hoping this increases), EA Access, and the new controller that will work for both Xbox One and PCs/Windows 10. As for the previously mentioned games, it was mostly a mixed bag for me. Halo has gone downhill for me for a long time–I’m still a bit intrigued, but not enough to really give it another shot so I didn’t really think much about Halo 5. Maybe one day though. The plot does seem interesting in itself, but at the same time I just feel kind of mixed overall.

Recore came up next and the main highlight for me was cute Robot dog: 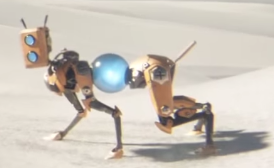 Look how cute it is. I was really upset what happened as it went (please stop doing that to dogs, games. Seriously, these three things need to stop: Post Apocolyptic settings (it’s one thing if it’s just a brief history lesson–it’s another if it is essentially the entire basis of the game), Zombies, and hurting innocent animals/people/things), but was happy to see it “revive” into a Bigger Cute Robot Dog: 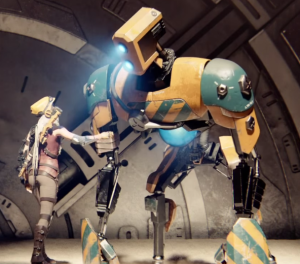 You live on, cute Robot Dog. From the ending/title shot, it looks like you’ll get many Robot friends (including little Robot dog back) which seems pretty neat:

But it’s hard to tell how I’ll feel about the game without truly knowing what it’s about. I will, however, take an actual little robot dog. Just saying.

Forza always manages to look fancy, but Forza has just never been my car/racing game of choice. It does look nice though, but I’d really have to see more before I decided anything–graphics are generally the last thing on my list unless something genuinely freaks me out. Cuphead is another example of a game that does a great job fitting its style, but I’m not sure how much I’d enjoy actually playing it. Tomb Raider was shown next which I AM excited for, but was disappointed that they focused much more on a lot of Ice Climbing and Running over puzzles and actual Tomb Raiding: 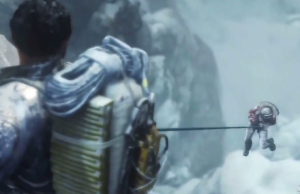 Anyway, this brings us to the next game that ended up getting a good amount of my attention, Beyond Eyes: 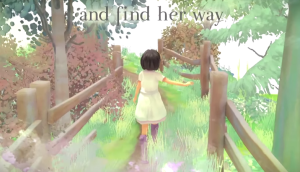 It looks very pretty and I’m interested in how the game plays. And the last game that caught my attention during Microsoft’s –Sea of Thieves:

It looks pretty and interesting so I’m looking to see more of it. Rare Replay also looks pretty cool, but as someone who still has all her consoles and old games, I just don’t have a need for it. But yes, that finishes up my interests with Microsoft’s conference!

Next up was EA’s. I didn’t really know what to expect nor did I have high hopes, but EA actually had the game that excited me most today–we’ll get to it though. The new Need for Speed looks interesting–I feel the last couple have kind of depended on various gimmicks so it’s nice to see one that may have finally let those go. SWTOR’s next expansion was shown next and I always end up feeling a bit sad when it comes to that MMO–I actually really enjoyed it before it went Free to Play and it makes me sad that the Free to Play was handled as poorly as it was. Supposedly it’s gotten “better”, but I don’t think most of my issues will ever be fixed. For now, please enjoy this lovely artwork of mine and Zero’s SWTOR characters before we stopped playing: 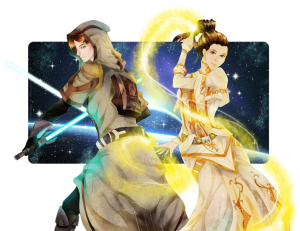 Following the bittersweetness of the above, the game I spoke to at the beginning started–Unravel: 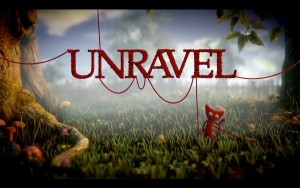 An adorable game that follows the adventures of Yarny. Look at him:

Look how cute he is. I need a Yarny Doll so badly. The game reminds me of both LittleBigPlanet and Yoshi’s Woolly World and I just already love it to pieces. If no new games are shown by Nintendo and Square Enix tomorrow, this definitely wins the game I am most excited for out of new games I’ve heard (and even high up there overall). And even if they do show new games, Unravel will easily still have a top spot, if not tied with another game to first.

EA didn’t get anymore of my attention after that, but it was okay. Yarny’s awesomeness in Unravel was enough.

Ubisoft’s started next and I’ll be honest, Ubisoft is probably going to be my least favorite panel of the year. That isn’t to say it had nothing I was interested in (though, it didn’t have much), but I just am… tired of Ubisoft’s atmosphere at E3 lately. I don’t like the random concerts for Just Dance, I don’t find their host funny, I feel like the vulgarity goes up during their conferences (along with rather gory/awkward trailers), and I just find it rather uncomfortable and disappointing. It feels like I’m watching a Frat Party. As for the only thing that did catch my attention fully with Ubisoft, it was Trackmania Turbo: 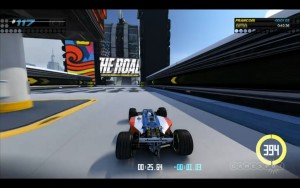 I never played the original but it looks pretty fun. I also was a bit intrigued by Ghost Recon Wildlands. I think the idea of a Black Ops-kind of team taking down bad guys is pretty interesting, but I don’t think I’ll end up getting it–the game just looks way too gory for my tastes.

And while I have no interest in the game itself, this was still kind of cool: 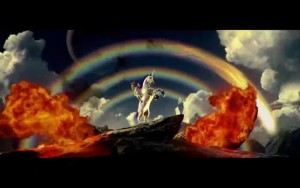 Finally, this brings us over to Sony. Sony had quite a few bombshell announcements, but nothing that was really enough to get me too excited. While I think Trico (the cute Puppy-Gryffindor) is adorable, I never had much interest in The Last Guardian. Horizon: Zero Dawn seemed a bit interesting, but most likely isn’t my kind of game. Media Molecule’s game was next though and it’s something I’m still debating on. It’s hard to describe so if you haven’t seen it, I’d recommend watching it yourself. These were probably my favorite parts: 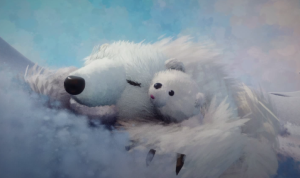 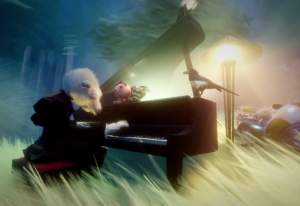 I loved the remix of Row Row Row Your Boat during the Bear-Zombie fight too though. The game almost sounds like a more free form of LittleBigPlanet. Unfortunately, I just don’t know if I’d ever be able to create much of anything, but maybe it’d still be fun just to explore others’ creations. And I would love to have plushies that looked like that little Polar Bear and the cute Teddy Bear on the Piano at the end.

We then moved onto Firewatch which is apparently a pretty cool mystery game and I am quite excited! Plus you can hold a cute turtle: 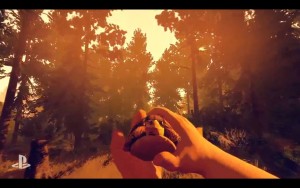 That is awesome in itself. I hope the turtle plays a part somehow. It’s too cute not to. Next was a very cute Final Fantasy game called World of Final Fantasy. I really love the chibi graphics they used and actually think it looks better than when they switch them off: 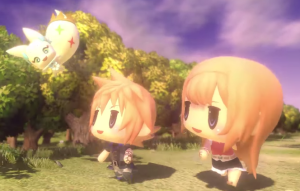 I mean, look at them. Look how cute they are.

This was then followed by the announcement of an HD Remake of Final Fantasy VII which is a very special game to me. However, I don’t see myself picking up the HD remake. Aerith is my favorite character and considering what happens to her (and that it’s likely never going to change), I’d rather not see that in HD. I do hope there will be lots of videos of Chocobo Races. That was really the main focuses for me, but I do want to bring up Shenmue III and the next Arkham game. I don’t recall ever playing Shenmue, but the characters seemed familiar to me. I’m not entirely sure how I feel about Sony essentially advertising the game’s Kickstarter like that. Not that they shouldn’t advertise, but I feel they could’ve easily covered the game itself over showing a Kickstarter for it and telling everyone to go pledge. It was just kind of surprising to me and I wonder how that could effect things for other games in the future. Going back to the game itself, it does look nice, but I’ll need to see more and look up a bit of the past games before I make up my mind on it. As for the Arkham series, that trailer was incredibly creepy. Kind of like the Dead Rising 2 trailer from last year, it was just incredibly unsettling and I wish I didn’t see it.

The last two things to catch my attention were Disney Infinity and Uncharted. Despite my love of Disney, I just can not seem to get into Disney Infinity and I’m not sure I ever will–so many exclusives between consoles honestly doesn’t help. As for Uncharted, I’ve never actually played one, but they just make me more and more curious. Maybe one day.

Anyway, I am looking forward to the press conferences tomorrow and my first day on the Show Floor! ^__^