If you haven’t noticed yet, the Celebrity Miis that were shown in Nintendo’s various Tomodachi Life Trailers can actually be downloaded through QR Codes on the Official Tomodachi Life website or the QR Codes I have shown under each Mii’s description! Scanning through Town Hall is actually really neat as it keeps the characters with the outfit, personality, voice, interior, and etc. making it more like it’s that exact Mii versus just the starting one from Mii Maker. If you transfer wirelessly, the Mii will also keep it’s favorite food list among other things. It’s a really neat feature to say the least.

While I’m not a big celebrity person (so I don’t know if I will keep them just yet!), I thought it’d be fun to check what each one had.

To start, each one DOES come with gold pants–however, they can not be sent to Mii Maker (or edited in any way). I’m not sure why you can’t (I really wanted to move them to Mii Maker to then move to my Plaza so I’m a bit disappointed about it to be honest), but you can’t and it kind of stinks >> Similarly, like many of the special QR Codes, if you delete them, you can never scan them again. I don’t know if this also applies in the sense that if a friend tried to send them Wirelessly they still could (they may not be allowed to even be sent), but yeah.

I’d also like to point out that even though these Miis will probably have items you want, they do not get added to your shop (which was what I was hoping after failing at sending them to Mii Maker… but nope T~T)

So first up, Christina Aguilera! She comes with the Spring Interior (SO CUTE T~T), the V-neck top Outfit in Black, Regular Clothes in Red, the Trilby hat in Black, and the catchphrase “Sing strong!”. She has the “Independent Artist” Personality. 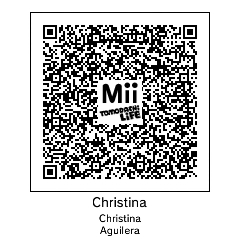 He comes with the Soccer Stadium Interior, the Star T-shirt in Black, Regular Clothes in Red, and the catchphrase “Show me ur best!”. He has the “Outgoing/Entertainer” Personality. He’s the only one that has a different outfit than his Mii’s icon on the site. 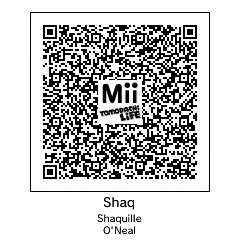 She comes with the Purple Interior, the Dress & Jacket Outfit in Blue, Regular Clothes in Light Green, and the catchphrase “What’s up!”. She has the “Outgoing/Entertainer” Personality. 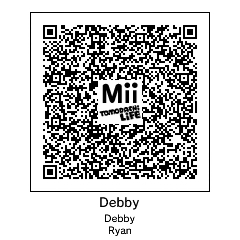 He comes with the Street Interior, the Peacoat Outfit (Kind of cute) in Black, Regular Clothes in Black, and the catchphrase “BOOM!”. He has the “Outgoing/Trendsetter” Personality. 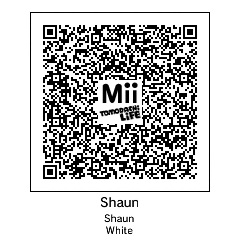 And last, but not least: Zendaya! She comes with the Sparkle Interior (The interior Blue gave me that I want T~T I don’t care much for the shoes and stuff shown, but the pink and sparklyness and door are soooo cute!) the Flower Leggings Outfit in Black, Regular Clothes in Black, and the catchphrase “Time to dance!”. She has the “Easygoing/Buddy” Personality. 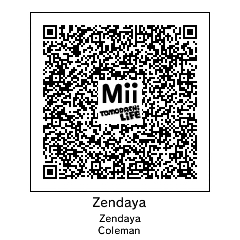 Also, Nintendo’s Island’s address is super cute. I’m not going to spoil it, but I am envious of it! Mine sounds so savory–I wish it was a bit sweeter like Nintendo’s.

But yes, while there isn’t much reward if you don’t care about the celebrities themselves, I still think it’s a pretty neat feature <3 Note: I received the game early from Nintendo. Thank you, Nintendo! :D If you are interested in Tomodachi Life, you may want to look into picking it up!