Today, the special Disney Magical World/Disney Magic Castle: My Happy Life was announced that it would be coming over–though, only sold in Walmart and the Nintendo World Store. I had told myself if I ever got a Japanese 3DS, I’d want that one. It’s just beautiful: 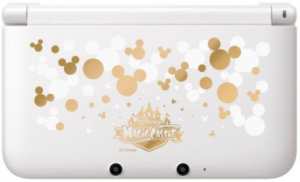 So, the fact that it’s coming over has me incredibly undecided. Part of me really wants it–I just adore the look and it is my top favorite of the special edition 3DS’. On the otherhand… I don’t need it. It wouldn’t replace my current 3DS (I love it too much), I prefer the normal 3DS (The XL is too big for me and I prefer the glossy versus the matte), and I already have two 3DS after my original 3DS’ charge port broke (in which I transferred its data and the design to my new 3DS).

The lovely things used to decorate it were gifts from a friend of mine–she’s the one who designed on my original 3DS as a birthday gift. It has a Capture Card because re-doing what we did with my original 3DS would’ve been risky and nothing would’ve been as worth it and I’d have been devastated forever so I got one with a Capture Card to lessen the amount of crazy picture taking I’d do in Animal Crossing.

This was my original 3DS: 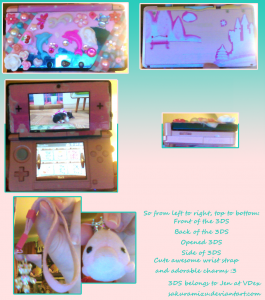 You can see the design has changed quite a bit due to the color change and other issues, but generally the same idea and yes, the 3DS is half teal (the color I got at the midnight launch in the NYC Best Buy as it was that or black) and half pink as I was pretty devastated and mixed when the pink came out since my teal 3DS was so special… so I worked out a way to have both because I can be crazy sometimes.

The inside is the same in my current 3DS and I switch the charms out every so often because they tend to get beat up (Right now, it’s a Narwhal Charm and an Omanyte Charm). While the back is completely covered in a pink sticker versus seeing the Capture Card cover. But yeah, I do miss my original 3DS. It does still work, but the way to charge it is incredibly inconvenient and it can’t hold a charge well at all so it can’t be played long thus, it’s mostly as a helper 3DS in games and things like StreetPass.

Speaking of StreetPass, It is part of why I love my 3DS so much. I mean, I picked up Nintendogs with it, but StreetPass was the big thing for me. I loved Find Mii, I loved the puzzles (still 3 to go!) and I also love all the new games. I have over 2,000 people in my plaza with over 3,000 tags which isn’t tons, but I’m still happy with it.

CURRENT STREETPASS GAME STATUS:
Puzzles: ChibiRobo, Super Mario 3D World, and Yoshi’s New Island to go.
Find Mii 1: Complete
Find Mii 2: Complete
Mii Force: I’m on World 4 I think? I only try it if I have 8 or more Miis. I am so terrible at this game though.
Flower Town: 3 Flowers left for all 80! I still have several jobs to complete too. Then I plan to work on getting all colors.
Warrior’s Way: Only one achievement left–to defeat others’ armies 300 times. Once I do that, I’ll face the Emperor one last time and be done with it.
Monster Manor: I’m on floor 20-something. Puzzle Boxes hate me–I can’t seem to get them for the life of me which sucks as I love puzzles :(

I currently have Disney Magical World (Which I have thanks to Nintendo–THANK YOU AGAIN, NINTENDO <3), Pokemon Battle Trozei (which will probably be the next removed), Professor Layton and the Azran Legacy (I actually have everything already, but I find the treasure hunts fun), StreetPass Mii Plaza (obviously), Animal Crossing: New Leaf (I have everything, but I love seeing people's houses), Fire Emblem Awakening (Until I have max renown), Style Savvy: Trendsetters (Just kind of fun), and Nintendogs (PUPPIES AND KITTIES) set up for StreetPass. Getting away from StreetPass and back to the 3DS... Here are some of the other 3DS Special designs I've liked: 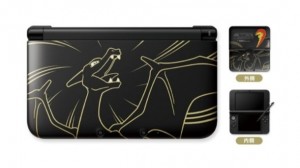 While not my taste or color, I think the design is great and Charizard has a very special place in my heart. 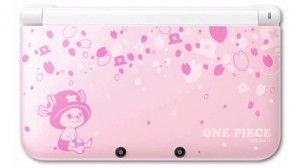 I’m not a One-Piece fan so I don’t know the character at all… but I love the design and color, even if the color isn’t that different from the normal Pink and white XL.

Other Honorable Mentions:
The Zelda 3DS – I actually just really liked the gold lettering and gold thing for placing the game in–I prefer gold over silver so…
Pikachu 3DS – I do love Pikachu (Favorite Pokemon <3), but it was too much yellow for me--I also think there could've been a better design rather than Pikachu just standing there and kind of cut in half. Still cute though. Peach 3DS - Just a sticker, but still cute. Gold Xernas Edition - Very pretty, but not really my thing. Pokemon Trozei 3DS - All the cute Pokemon heads are nice, but it looks rather stuck on over a design. I think it could've been cuter. But yes, maybe it's a good thing I don't like more too much as the Disney XL taunts me enough and I really shouldn't get another 3DS! :P