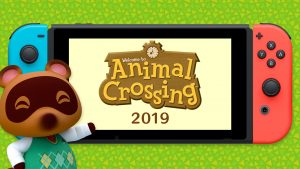 So, there was a new Nintendo Direct today (the one postponed last week) and much to my excitement, a new Animal Crossing game was announced! (Other games I am excited for: Luigi’s Mansion 3 and Yoshi’s Craft World and you can see a bit more of my commentary over on Twitter) You can also check out the specific announcement below:

Isabelle also made it into Smash, but hopefully she’ll still have time to help us out in the Mayor’s Office when the game comes out next year :) Which brings us to the point of this post– I wanted to take a moment to go over some things I’m hoping to see in the upcoming game.

I’ve already done similar posts in the past and still standby all of those things, but with Happy Home Designer and Pocket Camp, I feel there’s a lot more I’d like to see and well, also not see, honestly.

In general, I think New Leaf is easily one of the best Animal Crossing games so literally just starting from that and upgrading it (Think like a New Leaf+) is a great start.

Being able to place our houses everywhere is great and I hope we see that go further with being able to place other villagers’ houses as well, or at the very least, have the option to do so. Being able to use paths to block things off with the Welcome Amiibo update was great, but I don’t really want to litter my town with paths to do so and it’d be super easy to just have it so Nook can be all “Hey, *name* moved in, would you like to place their house?” and saying “Yes” would put you in a similar mode like placing your own house while “No” would have the house plot be placed randomly.

Speaking of houses, I generally felt the size of the house in New Leaf and Wild World is great, but I’d absolutely take extra rooms upstairs or even larger rooms in general. I’d love to see different room sizes as well from Happy Home Designer.

Happy Home Designer in general brought a lot of great things (And I may get back to it soon, I do still have villagers to give houses) such as: Being able to select a skin color, ceiling items, customizable doors, different room layouts, and exterior customization. I hope we’ll be able to place items outside and maybe for shops and things, actually be able to customize their appearance. Just imagine people’s towns having a different looking cafe or Nookling shop.

I’d also love to see the campsite from the Welcome Amiibo update of New Leaf combined with features from Pocket Camp. Campers showing up there and being able to have villagers visit that way alongside being able to decorate a camp site and camper. I think that’d be really cute. Speaking of Amiibo, I hope we can use the cards and Amiibo ingame as well. It’ll make getting my favorite villagers easier for sure.

While I do love the train scene with Rover (or Kapp’n in non-train cases), I would like to be able to pick my character’s appearance from the start. I mean, I usually get the face I always get answering honestly, but it’d be nice to have hair I like right away and for those who’d prefer a different skin color and not want to wait until Summer when they can tan, I think it’d be a nice option.

Honestly though, I hope it brings in all the amazing items we got to see from Happy Home Designer and Pocket Camp. My issues with Pocket Camp’s mechanics besides, it had tons of great items (Such as the water-paths!!) and I’d love to use them in my main town. While the changing of seasons is a thing to the point where I don’t think we’ll have scenery changes like Pocket Camp has, I still think a lot of cool features from it could be brought over.

As for things I hope that change from New Leaf:
-The furniture limit. At the very least, I hope it’s much greater (City Folk having a smaller one than Wild World still hurts me on a personal level), but I’d love to see it gone entirely. We can only put so many items in a room regardless due to size restraints, we don’t need item limits on top of it.
-The moving mechanic. While I do feel this was a glitch/coding issue based on the Best Friend prompt, I hope this is adjusted. I’d also love a way to permanently set someone to stay so I’d never have to worry about them moving, even if they come back again.
-As mentioned above, villagers being able to place their house wherever.
-More pattern space. And being able to edit patterns regardless. While I understand why this existed, this made it incredibly frustrating exchanging patterns between characters in the same town. Every time I wanted to edit something, I’d have to get it back to the Mayor somehow and it was just really tiring.
-Regional exclusives just being part of everyone’s game. While I made tons of great friends who I am looking forward to playing with, I’d love to be able to learn about different cultures and experience things in my game alone without needing to essentially line up regions to get everything. Not only that, but I genuinely do love hearing about different cultures so I think it’d be a lot of fun to see the different events in every game.
————Similarly, I’d love if some older events made a return to.
-I adore ordinances, but I’d love to be able to set more than one.
-Also more public work space!

I hope we’ll be able to transfer some stuff from New Leaf to the Switch version. Mainly because I might cry remaking all of those patterns.

I’m really curious just what will be new though. I think we can all expect new items at the least, probably some new characters as well (Also we’ll see Lottie return). I’d love if we could actually fully adjust our map ourselves or even increase our town size. I wonder how many villagers we’ll get this time–12? 15? Could we have less if we wanted?

There’s so much to look forward to. And I’m already planning out what I hope to do next <3