So, I still have my full press conference thoughts coming soon, but I really want to break down my thoughts on ACNH separately because, well, I have a lot to say and think about. I know some people are upset that the game won’t be out until 2020, but ignoring my own personal reasons of relief from that date, I kind of expected it. There was nothing beyond a teaser until this point and with Pokemon also out this Holiday season along with Smash’s updates, I would’ve been very surprised to see Animal Crossing added to that. It being next Spring just works out a lot more in my opinion and helps it stand out.

I’m also VERY happy the game has a universal release date this time… I just need to… debate if I am crazy enough to try and buy it from Australia or something for an extra day of play despite my hate of downloading digitally.

Anyway, I’ll be talking a lot about the details of the trailer and the Treehouse segment currently happening so if you haven’t at least seen the trailer, be sure to watch it!!: 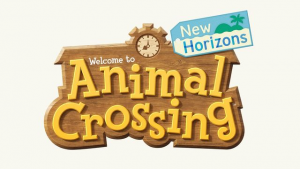 I love the little ticket look and the whole traveling by trip thing to this island. Considering we had the higher quality models from Animal Crossing Plaza and a bit from Pocket Camp as well, I’m hoping most, if not all, characters will make a return including new ones.

To start, the initial thing I’ve noticed is everything seems to have a bit of a rounder/softer touch–our character also seems a bit older/taller again:

While I may be looking too much into it and it could just be an atmospheric touch, I am wondering if the specification of it being “The Deserted Island Getaway Package” is that we’ll actually have other packages we can check out.

Anywhere from being able to check out other islands to maybe things like “The City Getaway Package” where you can live it up in an apartment and/or some kind of exploration focus or traveling aspect. Maybe it could even be a DLC option.

I think that would also give a lot more to do. While I loved Desert Escape, I’m not sure how I’ll feel about an expanded game mode on that, even though it DOES seem like some usual Animal Crossing features will still be around. Essentially, we started living it up as Mayor and are now camping on an island. 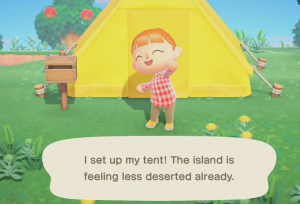 And it really does bring in some new features from Desert Escape such as collecting materials (though, twigs from trees is new) and some of the crafting aspects (which in the game prior, was only partially through Cyrus). 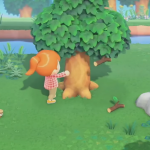 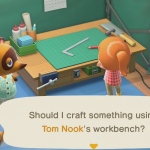 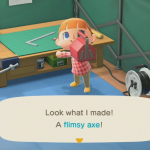 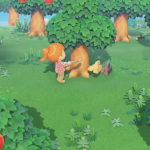 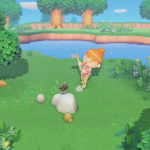 You can get twigs, lumber, rocks, clay… Definitely a lot to work with. On the bright side, if you’re not a big crafter like me, you also have the option to just buy more. 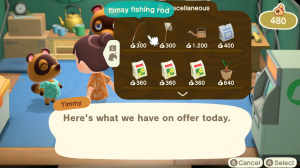 I will say axes being able to break is something I’ve never enjoyed so I’m not thrilled by an even more flimsy one :P Unfortunately, it looks like everything has a flimsy version: 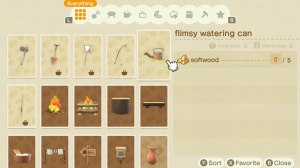 Which between this and the farming makes it feel even more like Animal Crossing crossed with Harvest Moon. 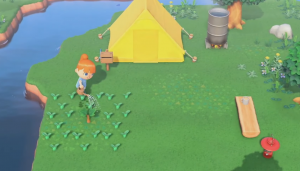 On the bright side, being able to place furniture anywhere on the island is really great and it’ll be fun to decorate the island as well as your tent.

On a side note pole vaulting is amazing: 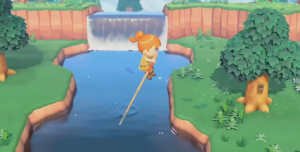 And you can apparently just… dig up trees? Definitely makes moving them around easier if so. 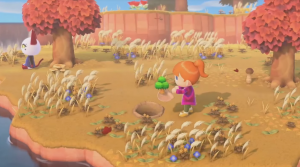 Also, I love seeing Olivia just sitting there and I’m hoping we’ll see a lot more from villagers too. 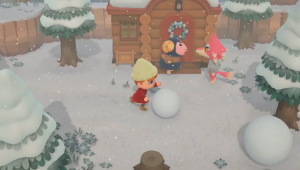 I wonder how many villagers can be on the island with you. It’s also really nice to see the Villagers in different outfits?? Eunice has a jacket instead of just a scarf and Freya actually has sleeves!! AND FUCHSIA IS WEARING A DRESS: 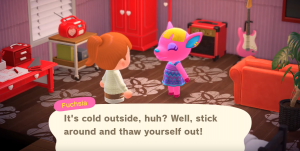 Also that red set with the white hearts for some of the accent is new and really cute. Maybe for Valentine’s Day??

There’s also more inventory space–up to 20 from 16 (and you’ll see the pole vault item there in the third slot): 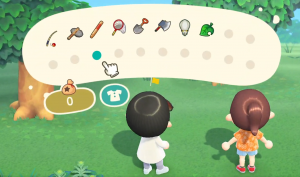 Unfortunately, still no designated tool section, but maybe that can change in the future.

We can even make natural paths: 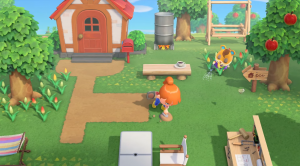 It also seems flowers will actually bloom and you can see what colors they will be as they grow.

And being able to play with 8 characters is so cool!! I’m hoping we’ll be able to pick everything from the get-go like in Pocket Camp and Happy Home Designer. Though, I will admit I’ll miss the face quiz… but I’ve gotten the same face in every game anyway just answering honestly. (Edit: Polygon has confirmed you WILL be able to select your appearance at the start of the game like in PC and HHD and IGN confirmed there will be new facial features and hair as well–I’m personally hoping for a nicer ponytail) 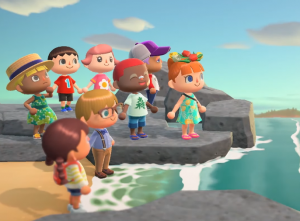 It also looks like the back items that were introduced in Pocket Camp a few months ago will be a feature in New Horizons as well. Similarly, we have different skirt shapes on dresses and the overalls which would essentially be additional one piece outfits (sure, maybe it could still be a top and pants, but it looks pretty seamless). There’s also the flower crown on the orange ponytail girl and I wonder if that may be a crafting recipe. I’m also so excited about local couch co-op as well which means I can play with several members of my family who love this game–even all at once:

In the new footage on the Treehouse, they confirmed that we’d be able to move things in halves like Animal Crossing: Happy Home Designer rather than full squares which is nice and offers a lot more decorating opportunities. They also confirmed the new flowers/weeds and one thing I find really cool, being able to see some of the special NPCs (like Nook and his nephews) walking around as well: 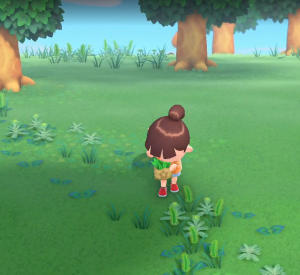 Moving onto the Nook Phone, seeing all the blank spaces makes me wonder if you can get more apps for it in the future (Edit: It’s been confirmed there will be more apps for it): 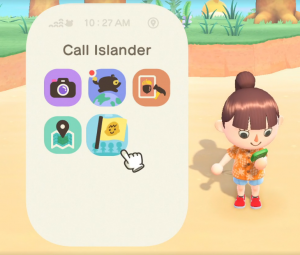 Fishing has also been expanded with clams you can use to make fishing bait (I would guess there could be other baits you can make too). It seems you can get ideas for new DIY recipes which is really cool: 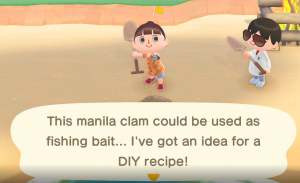 Clams are indicated by these little shadows that spurt water which is really neat:

I just hope it won’t be too convoluted and it won’t be like “YOU CAN’T GET THIS FISH WITHOUT THIS BAIT” because like. dealing with the weather and seasons is enough, Nintendo.

If you missed the Treehouse presentation, the whole thing has been uploaded:

The treehouse also confirmed that the Southern Hemisphere is catered to as well as the Northern Hemisphere this time around with seasons changing. And with the Villagers also being in debt to Nook, it looks like they can have house upgrades as well:

I wonder if we’ll have any input towards them?

Finally, I wanted to bring up Polygon’s post about Isabelle: Essentially, it sounds like you’ll be building up the population of the island until it resembles more of a village further encouraging the idea of really… starting from the beginning to build up a town. The island will feature development levels and as it increases, we’ll see new characters added including Isabelle. I’m guessing this is how we’ll get more stores and characters in too which is really nice. 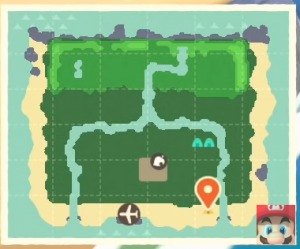 I’m personally pretty excited about cliffs again. And we can see two tents set up as well perfectly aligned which makes me hope there’s either a stricter villager designation or we can place them ourselves. (Edit: IGN confirmed we can place villagers’ houses if we don’t like where they’re placed. Two random villagers are picked at the start to go on the getaway with you.)

IGN’s interview also confirmed that any kind of Pocket Camp connectivity will just be with some collaboration items and that we may be able to directly gift items we craft to villagers.

Anyway, I’m sure I’ll end up adding more observations and thoughts as this goes. But honestly, I’m excited to play. It feels like it could almost be more relaxing in some ways and honestly, I could use that. I’m so looking forward to playing with so many people. I made so many great new friends with New Leaf and I look forward to playing with them again and making new friends as well.

For those who followed my New Leaf blog, I WILL be doing a similar blog series, just over here instead :) And with videos and streams again too. I can’t wait.