This is probably one of the most different posts I’ve had here, but it’s something I’ve been thinking about a lot due to trying to create a new character. And I… really struggle with character creation.

I don’t even mean just playing around in a character creator– I generally can make things work as long as I have options. And while I tend to pick very similar options to validate inner turmoil as a child who repeatedly became disappointed in doll aisles, it’s really working from “nothing” where I end up running into the problem.

Character arch-types aren’t enough for me to envision some grand scheme of things, why Character A is doing this or what they want. Who they fall for, if anyone. Why they do what they do. All it really does is give me an idea of the personality and what they hope to do, but not the why.

People can create elaborate backstories for their character off the bat, but for me, that back-story has to come based off what they’re doing. What my instinct is for how a character would react in that situation and figuring out the why later, as if the character has securely locked their past in the furthest corners of their mind and each key unlocks a step further. The environment and the story shape them as do their decisions and so it’s rare that anything is as simple as it starts.

Which especially makes things complicated in a setting where you need to know all the details ahead of time because I never do. My husband has wanted to try D&D for quite a while and with me starting a whole dice collection because I love rocks and they reminded me of like… certain aesthetics combined with rocks, it finally got into “hey, maybe we’ll try doing this”. While I have slowed down on the dice collecting (though, I am still waiting for some to come and am looking forward to certain Kickstarters).

In the short run, I don’t think it’s something for me. Between character creation issues and my general shyness with RPing due to issues with my writing, it’s just a very stressful affair for me, even though I’ve known everyone involved for at least 10-15 years. I also have a tendency to get too immersed in situations and something bad happening can cause me to empathize too much with how my character feels and nobody needs to hear me crying about whatever random thing has effected me at the moment. It’s especially an issue when I can’t personally read certain tones of voice and due to playing a character that is not me, I need to just be… better at reading that and working with the skill-set given to me and the dice rolls I get and it’s not exactly easy. Especially when skill set-wise, said character should be able to solve a puzzle and then I roll a 1 and apparently just had a sudden stroke instead.

I also know my not talking is quite the inconvenience, but I don’t like talking. Too many instances of pronouncing words wrong, lisps, and my breathing issues and it’s a rough situation. Add on that my issues with hearing tones of voices also leads to me not being great attributing my own tone to what I mean and it’s just easier for me to write it out as if I was writing a story or we’d probably never get anywhere.

Regardless, going back to the main subject, developing a character as you play isn’t exactly helpful in a game where someone needs to know about your entire character’s story to plan their story. Which makes things really awkward as more develops in your head and another person isn’t on the same page. Especially when you’re incredibly anxious about sharing anything you create or come up with due to constant paranoia of it being the worst thing ever.

For the most part though, it’s made it very clear to me that I don’t really like making characters. I like writing and developing characters or changing things up to see how characters react and learning about them, but I don’t like starting from nothing. Even with my imagination, rather than feeling like I have everything at my fingertips, it’s more like I am surrounded by so much color, I can’t see. It’s too bright.

I don’t think I would’ve even gotten as far as even making a character for this even if it wasn’t actually a scrapped character idea for something else that didn’t work out. I had come up with the hair and name, but couldn’t find anything to stick and then realized there was another character with similar-ish hair and at the same time, was losing interest in the game, so I just kind of pushed it to the back of my mind and then when I needed a character, well, I had something to work with. And that plus combining the idea of not wanting to do what I usually do character-design-wise, Masara was born: 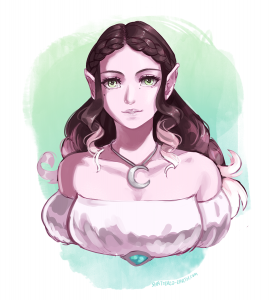 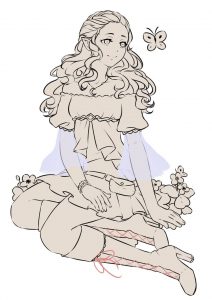 Art on the left by Shattered-Earth, Art on the right by tshuki

And if she wasn’t, I’d probably have ended up going with my still unnamed Fire Emblem Heroes character: 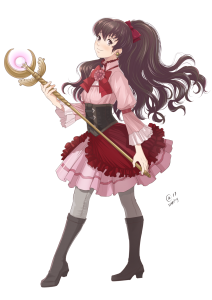 Art by Autumn-Sacura
She’s still relatively blank, despite liking her design. And that’s also why I’m actually more attached to my Robin from Fire Emblem: Awakening who despite having this huge story she’s part of, I had a full idea for her and even a writing project that I’ve just kind of kept to myself: 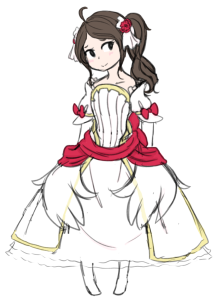 And even when my characters look similar or have some shared traits, their story is always different– their motivations, why they got to such a point. No matter how similar they look.

But it’s always a Work in Progress. And while in a sense, all characters should be, character development is important, I don’t think it’s meant to be to the extent I end up working with. Especially when some kind of one shot comes up and all your mind can come up with is a blank box of nothing because I apparently have the creativity of a teaspoon.