It’s officially Earth Day and with the recent update trailer, we know a lot is upcoming, not just in the sense of with Earth Day and it bringing Redd, a Museum upgrade, and Leif with bushes, but also with upcoming events like May Day (I see you, Rover) and the Stamp Rally and even a Wedding ceremony (which those benches are beautiful…).

To my surprise, Isabelle didn’t mention anything about Earth Day. It was even raining. I had a bit of mail– besides the 5 things I ordered from the catalog yesterday, I also got a Sombrero for helping Gulliver and a Mixer from Merengue. Some things I was able to switch out quickly, but others needed to wait until I redid my house.

The best thing though is I finally had my ballet slippers! 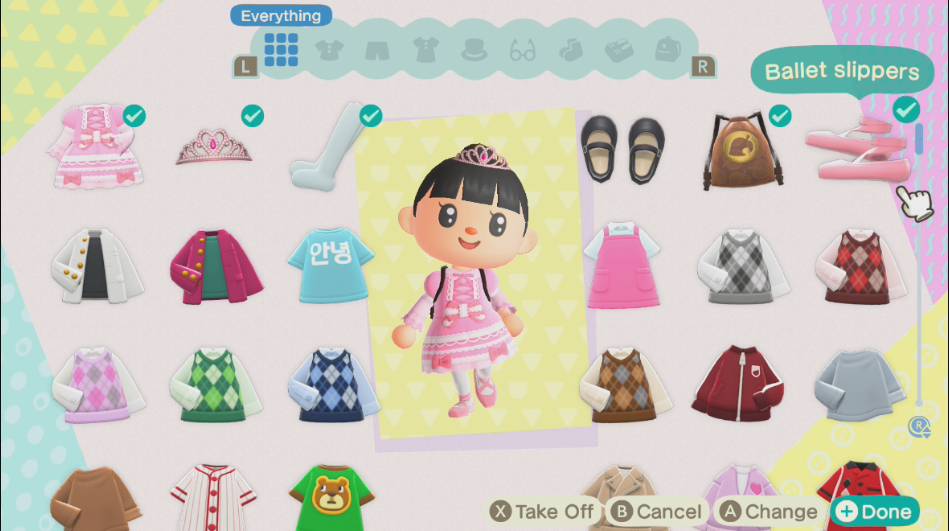 I will say I am so incredibly tired of picking up tree branches. Despite my tree branch frustration though, this was the fastest I’ve found all my fossils to date so that was nice.

I surprisingly got a Lucky Gold Cat Recipe from Bitty. Unfortunately, I had just learned it yesterday so I sent it over to my husband.

Audie also officially moved out so it was Nook Miles Island time. 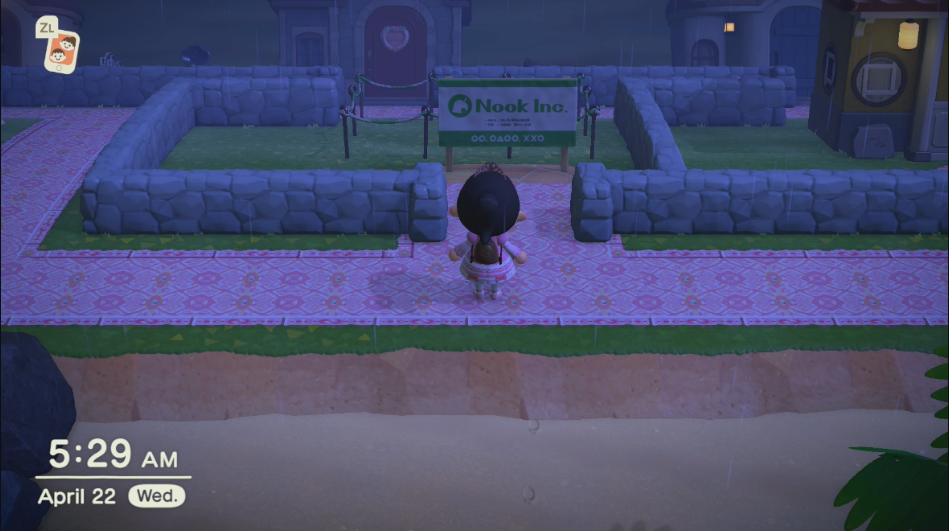 Kicks was here which was a huge surprise. I bought out his stock as usual.

I really wish the colors were listed.

I headed into Town Hall in hopes of the Earth Day Nook Miles things, but found nothing… I did, however, notice I apparently forgot to celebrate the Nook’s Cranny remodel yesterday which I feel awful about… I’m glad I was able to do so today.

I’m really surprised though that it seems “Nook’s Cranny” is being kept around this time over the name changing with the upgrade.

Regardless, with nothing else to do for now and feeling incredibly confused, I decided it was off to the Nook Miles Islands. I emptied out most of my inventory. I knew I wouldn’t be fishing and I only kept the bug net for tree shaking as it’s easier to do so on islands for items than it is in my own town. 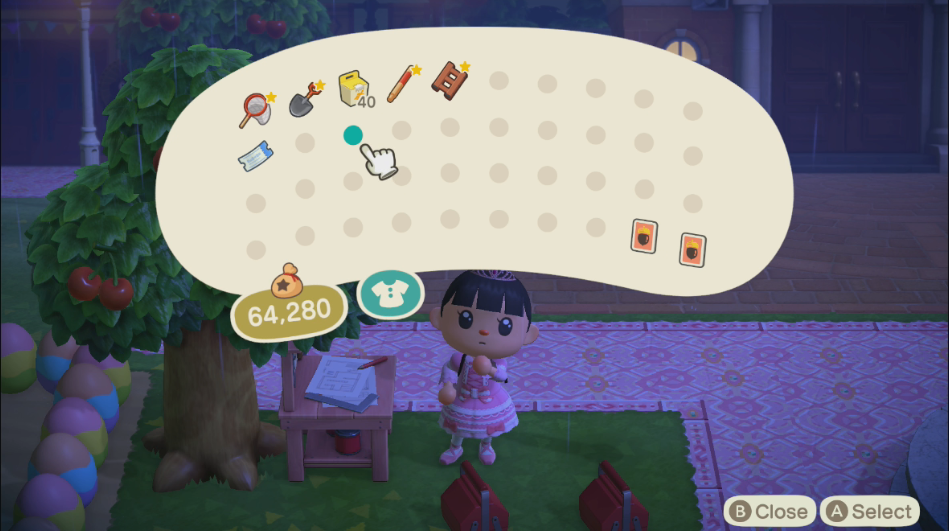 I also made sure to mail off those two recipes to my husband before I headed off. Now to just hope I run into Marina, Diana, Maple, or Peanut.

My priorities essentially were:
-Villagers
-Recipes
-Hybrid flowers
-Shaking trees
-Weeds (as I was actually getting kind of low) and loose stone (as I can always use more)

While I could do more of things, having only one day to find a new villager, I preferred to keep my trips short and sweet. I may gather a few extra peaches though for crafting recipes. I only have two left. I also decided to just catalog any items from trees, unless it was something I planned to use, and release the wasps and leave the hives behind as I had plenty of the materials and I just didn’t feel like making constant drop box trips (or shop trips once Nook’s Cranny opens).

In the middle of all this, I found out the Earth Day stuff doesn’t start until tomorrow… The day after Earth Day. I’m guessing this is because Thursday is their update day, but I actually found it really disappointing and not just because I woke up so early for this. I also swear during the trailer before the most recent, it said it would be on Earth Day :/

Regardless, I still managed to do some things! Taking a small pause after Island 15, Mika let me stop by her town to get the Zen-style Stone (aka a Japanese tombstone/grave) recipe from Bones. She even let me take some stone to make it (as I’m always low) and let me have an Ironwood Clock recipe too. And let me stop by again to check out Able Sisters because I forgot they were opened for her already because timezones. I even managed to get the pink Waitress Uniform that was on my wishlist!

I also explored my town a bit and Cookie taught me how to smile with the Happiness Reaction:

And I learned how to make a Pansy Table from Margie and got some more Nook Miles tickets from my house in preparation. I also ran into Merengue who was wearing the Mega Audino dress I made! 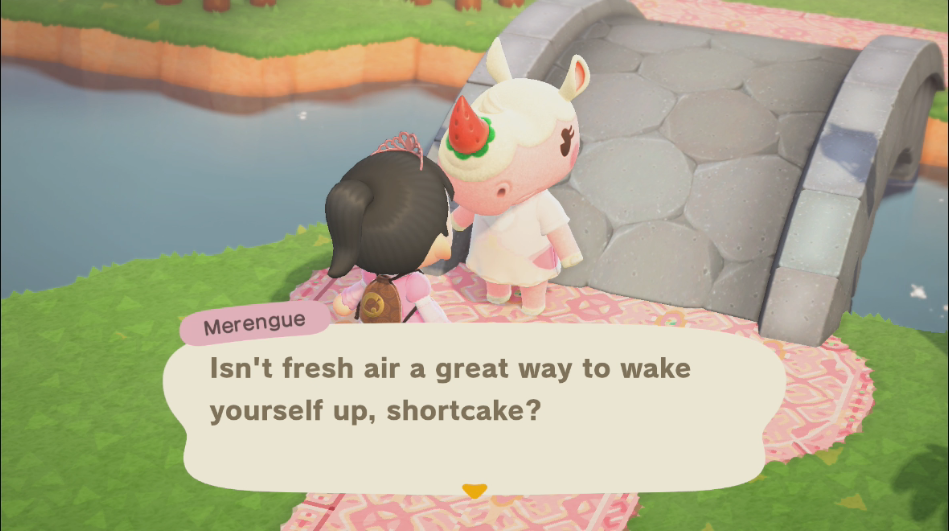 I also stopped by Nook’s Cranny as it was opened now. Most of the items weren’t new, but I did get an Imperial bed.

It was then back to Islanding:

In the middle of this batch of islanding, I also stopped by to check on my other villagers, gave Teddy the Hamster cage he had been eyeing in the store, and went around to see if anyone new was crafting as I noticed Margie stopped. Merengue ended up making a Knitted-grass backpack. I already had one though.

Able Sisters had also opened by now. Sadly, nothing interesting today though. Anything I would’ve wanted, I already had. I regret not working harder on cataloging from the shop, but not only is it just too exhausting and stressful right now, having to run all the way back to my house to grab things from storage to sell back is annoying. I think there is a lot of pros to the auto-storage thing, especially for anything you want to keep, but it’s just a pain for anything you just want to catalog and I kind of wish you could choose when you want to send it to storage and when you want to bring it with you.

With Island 28, I finally hit the 100 Shady Shakedown achievement so happy to have that done. I may still shake some trees for items though as it’s pretty helpful with my cataloging goal…

But our journey still continued to find Marina, Diana, Maple, or Peanut:

At this point, I was just too exhausted to keep going and also a bit too discouraged. I didn’t really keep track of how fast I found Merengue, Cookie, and Flurry, but it definitely wasn’t even close to this and it makes me nervous for finding any of the other four. I do have the Amiibo, but hearing such mixed things on then, I’m nervous about messing things up for someone or glitching my game. And it’s part of what has made me nervous about reaching out to others too.

In the end though, I did try and someone was nice enough to trade me their Marina for some DIYs and Bells: 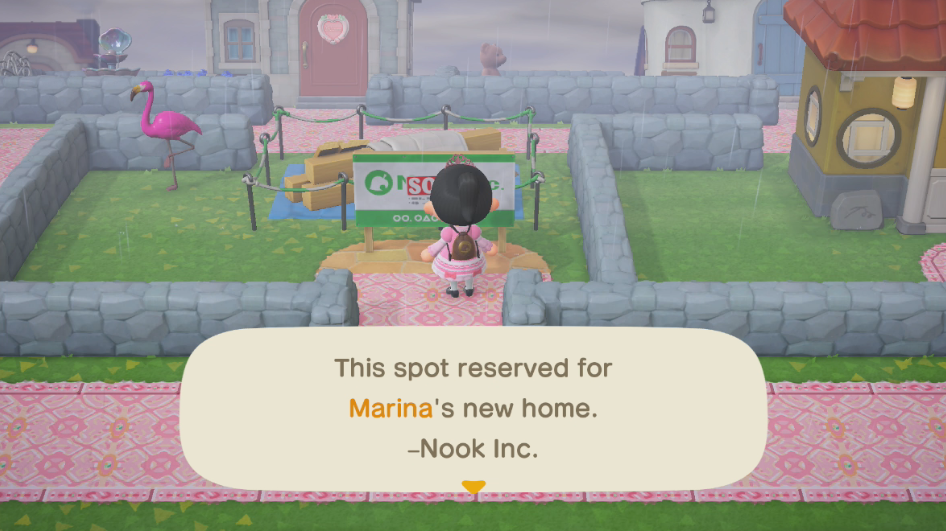 I’m so happy to have another villager from my Dream Villager list and while I would’ve been happy with Diana, Maple, or Peanut as well, I think this house plot is perfect for Marina. I can’t wait to decorate some stuff into her yard tomorrow. 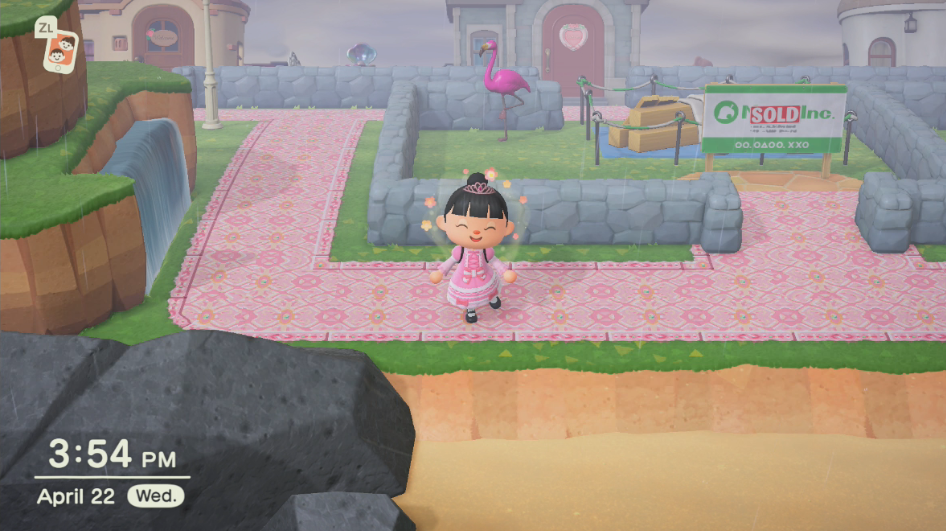 As some bonuses, Mika sent me the spring version of the Train Station! I’d love to get the Autumn and Summer versions too at some point, but they were low priority compared to Spring and Winter so I’m happy I have both of those now. 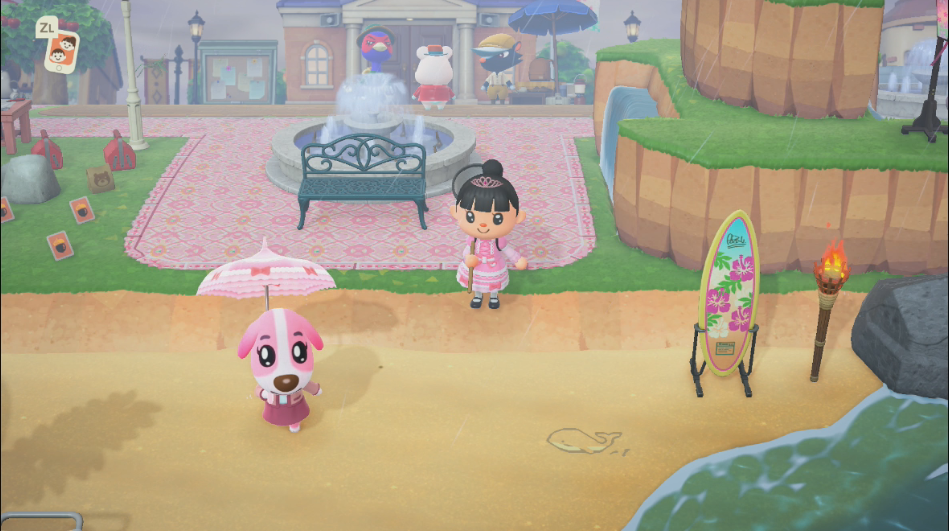 I also really love how villagers will use clothing and things you give them occasionally. Cookie will sometimes wear the outfit and use the umbrella I gave her and she looks adorable. 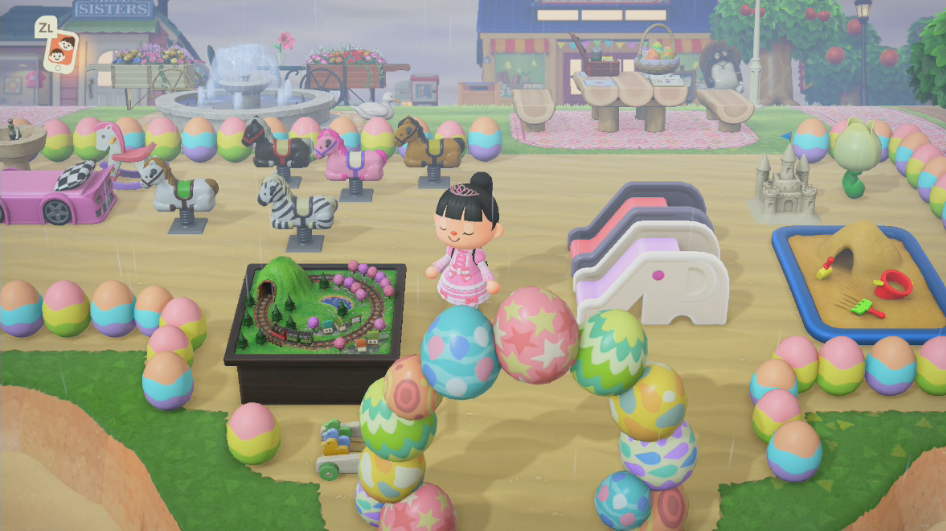 It’s definitely been a crazy day. But now I’m going to get some sleep before the big update tomorrow!

Edit: Late night additions! So, the update is officially out and of course, it’s best to patch early so I quickly took care of that. I was a little nervous when the “Updating Saved data” thing popped up, but thankfully everything seems okay.

As soon as I checked my mail, I was greeted with a letter from Nintendo! But I also noticed a mail from “Bank of Nook” which was interesting to me. 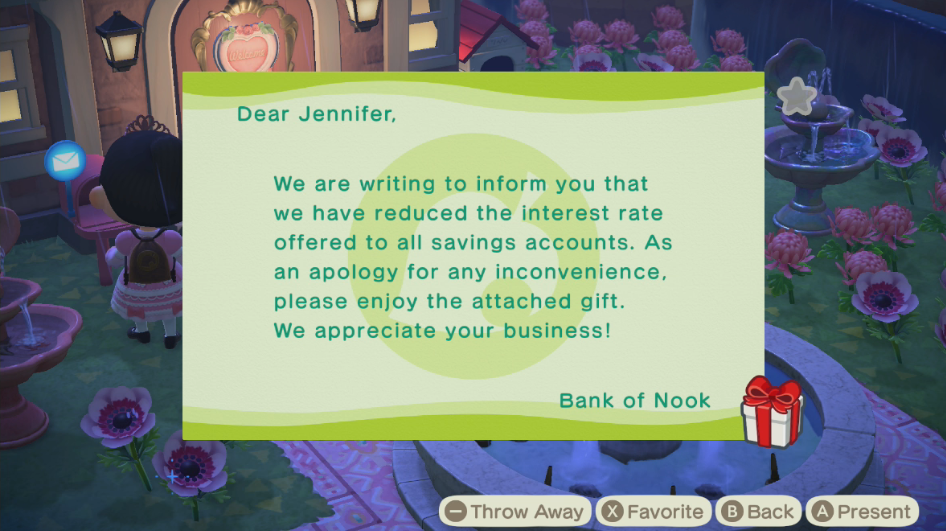 I think it’s essentially saying there’s no bank interest in this game (or bank gifts) which while I don’t mind the latter as much (Earning bells has never been my strong suit and I’m already struggling), it’s disappointing if there’s no bank interest as my bells are quickly running out with the new prices. (Edit: Turns out there was a 1% monthly interest and now it’s .5% because I wasn’t struggling enough I guess)

As I was putting stuff away though, it turns out my storage is full… I’m going to have to start emptying it out and quickly :/ I just hope I won’t have to get rid of anything I didn’t want to. For now, I took out a bunch of my tree branches and quickly did a lot of tool crafting due to the Nook Miles achievement. 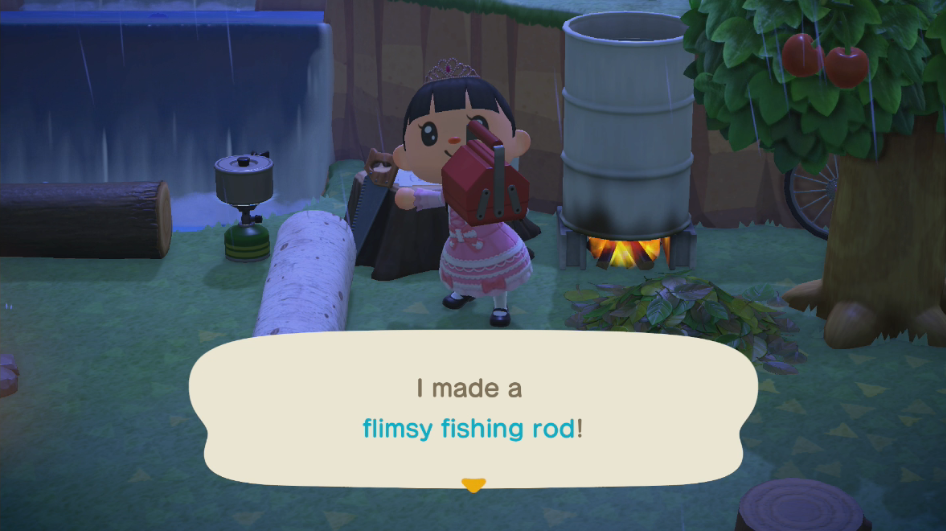 On the way, I also ran into Wisp! 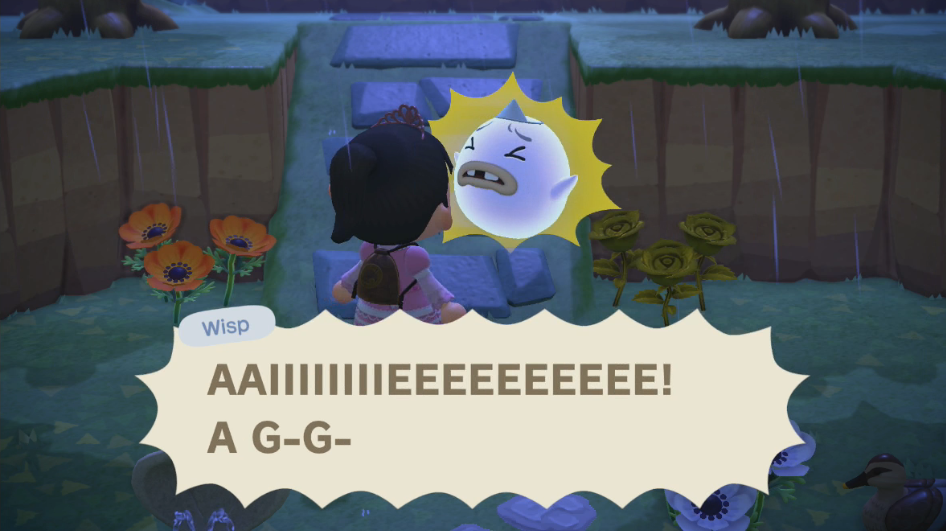 I always feel so bad for startling him… He ended up giving me a Wall fan.

After, I stopped by the Nook Stop to pick up the new shirts available for Nook Miles. I also ended up visiting some people!

I got a lovely new recipe (and some of these villager’s houses are so nice, I swear…): 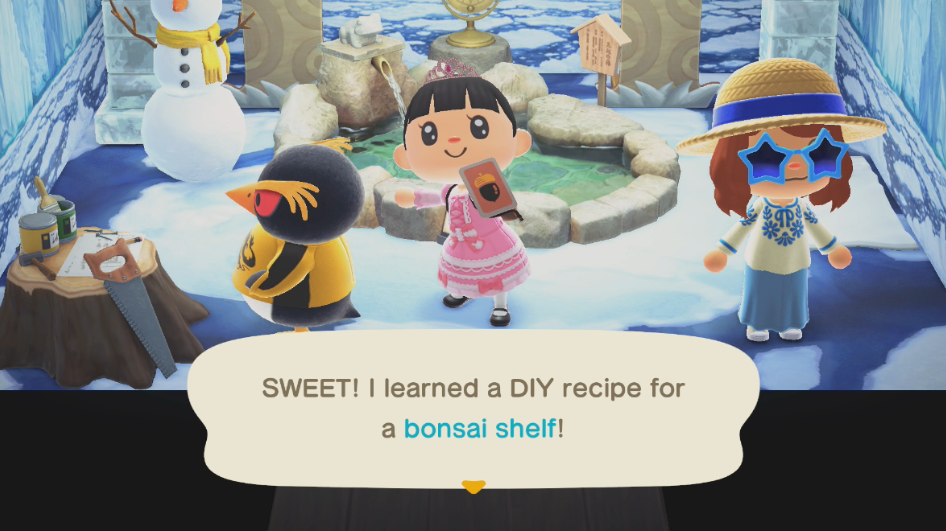 I also made a new friend and got to tour her town, catalog a lot of stuff, and even got some blue roses!! Plus even more pink flowers!

I only need one more Blue Rose now and then it’s just the Green Mums and Black Cosmos left to go! Also the lovely little Stargazing area just reminded me how much I hope to eventually get those recipes.

She also sent over the Pink Box Sofa items so now my bathroom is even pinker. I need to order the Simple Panels in a different color eventually. 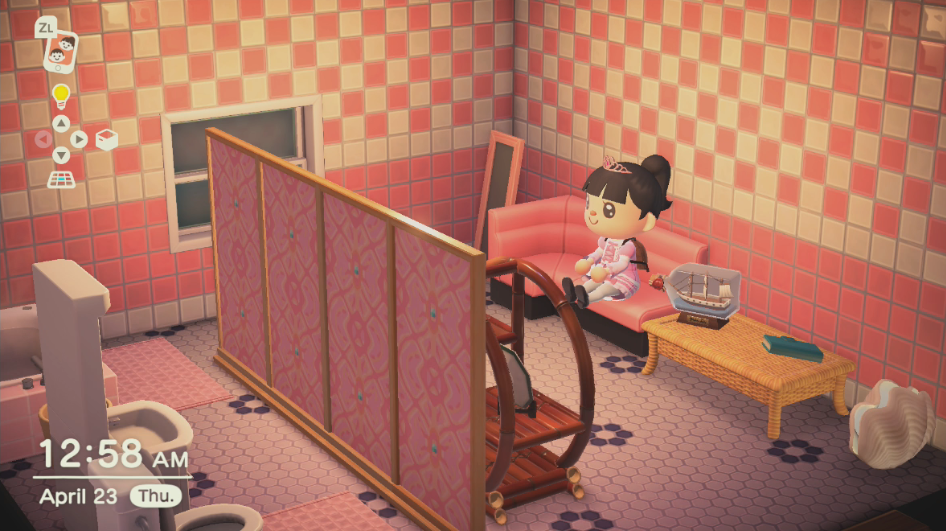 Meanwhile, Blathers is all set up for Art… and I sure hope I find Redd quickly because I want to upgrade the museum ASAP! 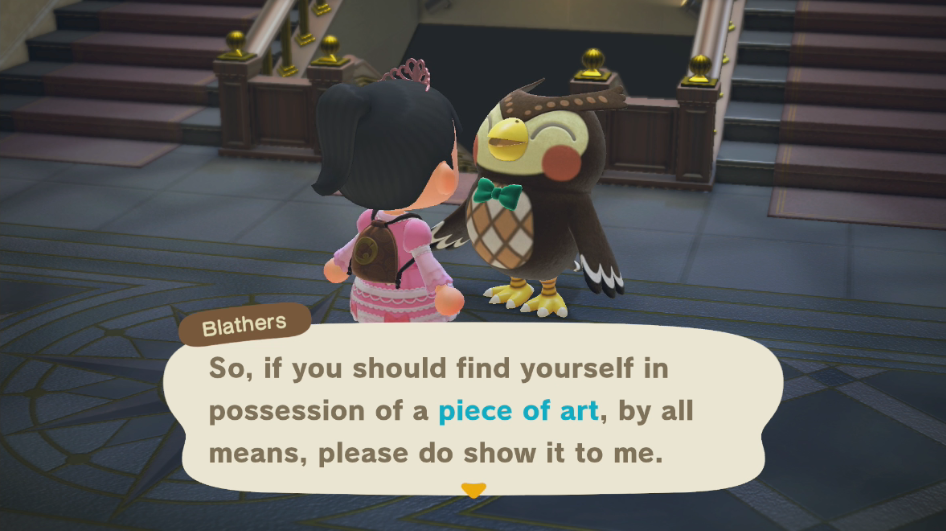