While Isabelle had no news, I personally made a lot of progress and my own goals have shifted a bit. The big thing is with Villager recipes out of the way, my focus is on Seasonal, Event, and Celeste recipes and various other things.

1. Cataloging situation – Besides clearly needing to update my list in general and also get non-furniture items up on that image list, there is still a lot I need to catalog. I also had just 6 Saharah rugs left at the time of starting Day 54, but by the evening I got them all (thank you so much to everyone who helped!!).

2. Celeste can apparently only give out the zodiac item during the correct season (IE: You can’t get any order zodiac item besides Taurus right now). If you have all the other recipes besides zodiac, she apparently just gives you the matching Star Fragment of the current zodiac. I don’t know if this holds if you visit someone who is on a different date who has Celeste, but I guess it’s something I can try to test next time I visit a friend. I wish I thought to take a screenshot or something earlier, but I was spamming through quickly as I didn’t want to take too long as I wasn’t the only one there and I wasn’t expecting to not get a recipe.

3. Birthdays – Celebrating a Villager’s birthday at another town actually counts towards the Nook Miles thing which is nice because otherwise it’s going to take 3 years minimum if you have 10 villagers and only celebrate theirs as you need 30 total to complete it. I do wonder if you go to multiple towns the same day to celebrate the same villager if it still counts too. Either way, I’m trying to stop by whenever someone has a villager celebrating a birthday so if you happen to, I’d love to visit!

4. I do want to work on crafting everything I still haven’t yet. I’m so behind on it (partially because I hate material grinding) and also need a lot of customization kits in order to get all the colors in one go so I hopefully won’t have to remake things. Unfortunately, I have not always managed to remember to do this, but here’s hoping I may be able to just catalog them from other people before it comes to that. I would say offhand, the things I probably need the most of right now are various flower materials, gold nuggets, and wood. Maybe also more stone. Maybe I’ll put a full list together soon.

Regardless, it was a new day and I had mail. One for the painting I bought at Filia’s town (Sinking Painting), one from Mika with the Cream Stew Soup Kettle (thank you, Mika!!), 5 letters from the Nook Shopping thing that contained those books so I could go make a stack of books, and finally, a letter from Cookie. 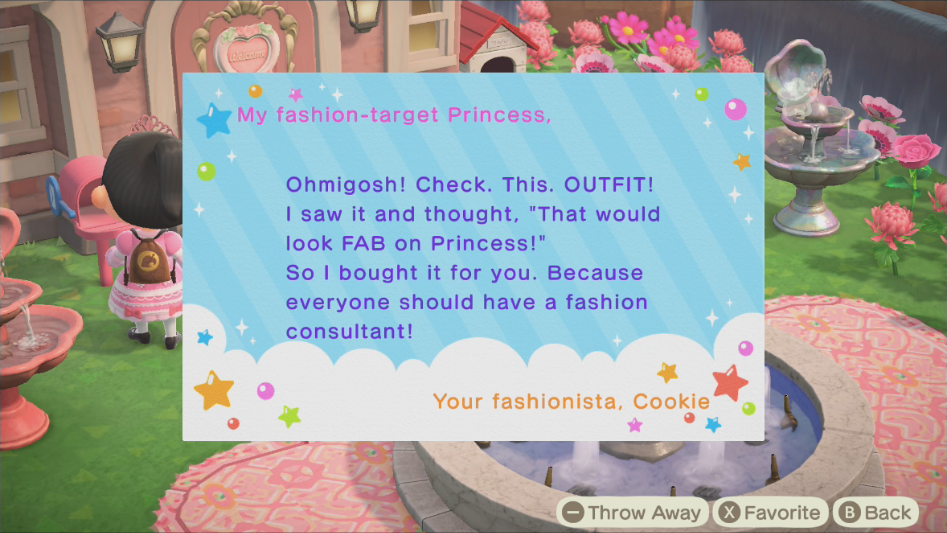 It was the Full-body tights outfit… I adore you Cookie, but I don’t think I will be wearing that.

I wasted no time making my Stack of Books before I headed off to the world of dailies. I’m not sure if I like the default version or the “Old” version better, but I just kept it the same for now. 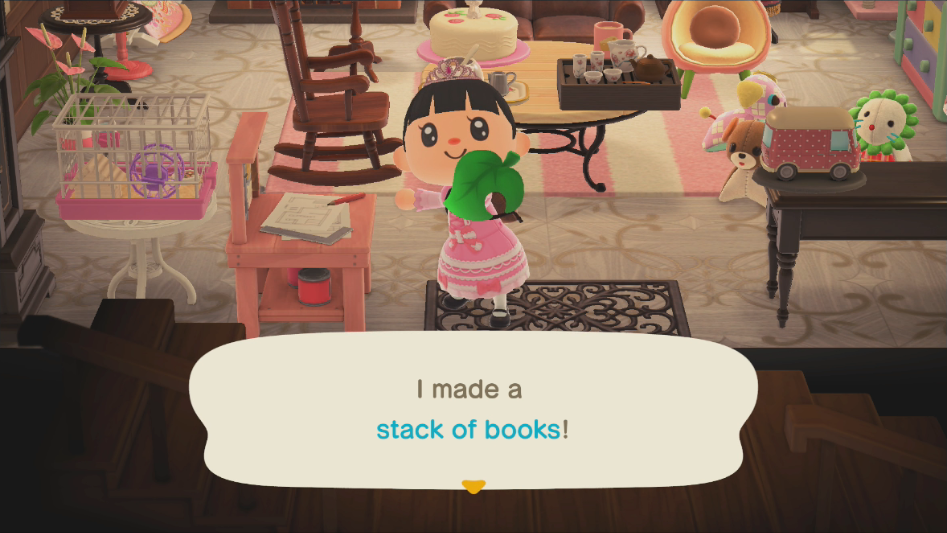 Reminder for self: Clean out my storage x-x But with that done, it was off. I donated the painting first, but now it was time to try and find my fossils and also see if I can figure out what happened to that rock.

Going along the beach, I found Gulliver!! It’s been so long. Here’s hoping he gives me some of the items I want… (Fingers crossed for either Dala Horse (heck, I want three of these… Maybe four), Moai statue, Pagoda (I need two of these), and Stone Henge. Also maybe the Hula Doll for the beach, though, that’s low priority in comparison to the rest. On an even lower priority a Lucky Cat just to craft a Gold Lucky Cat for the Recipe check-mark, but I’d much rather something I don’t have). 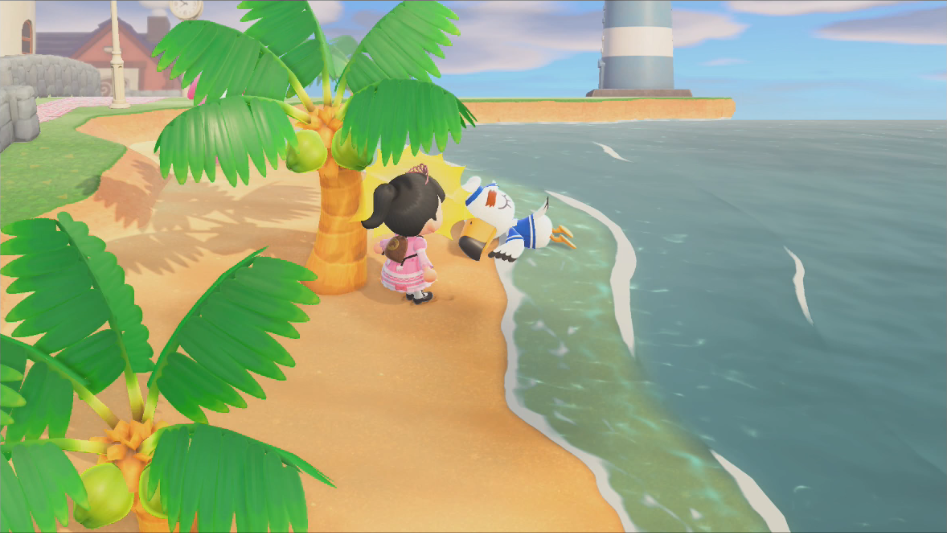 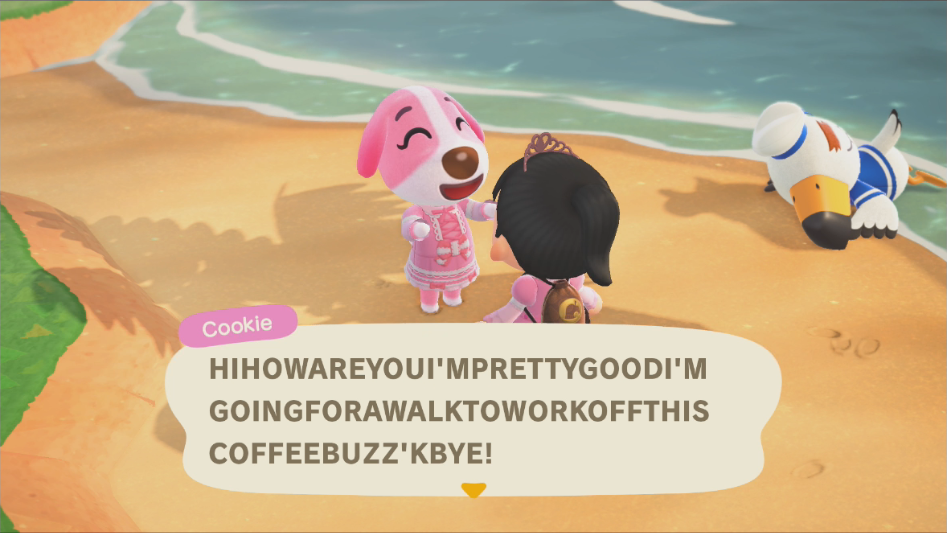 While I wasn’t having much luck with the communication parts, I did manage to sell enough seashells to the Nooklings to hit the final Nook Miles goal so that was nice at least.

Teddy was worried about his catchphrase, but I told him it was fine. 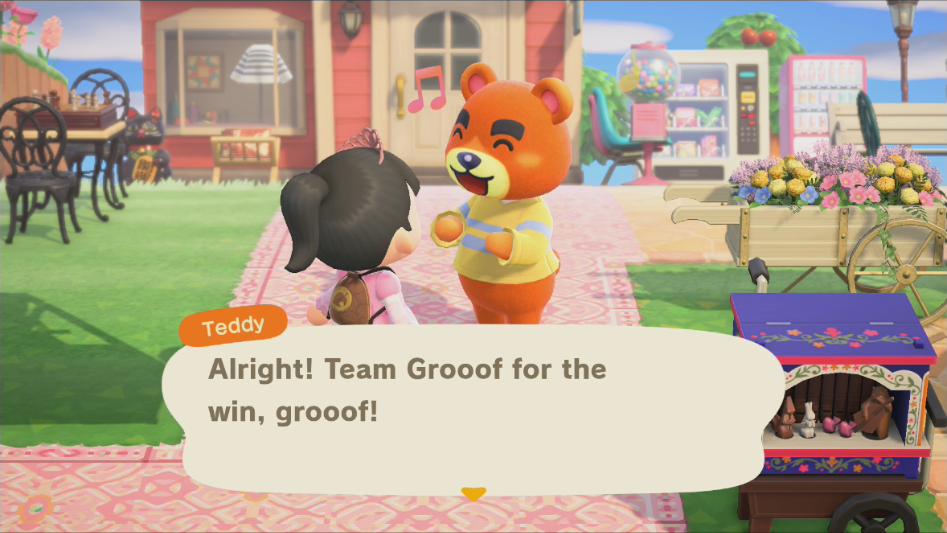 After finally finding the parts for Gulliver, I decided to continue my fossil search and along the way, found a lost item. I guessed it was Cookie’s right away somehow so that was nice.

I really wasn’t having much fossil luck (only found two), so I made my way to Filia’s for now as he got Redd again. Meanwhile, because I guess Margie calling me out yesterday wasn’t enough, Judy called me out today. 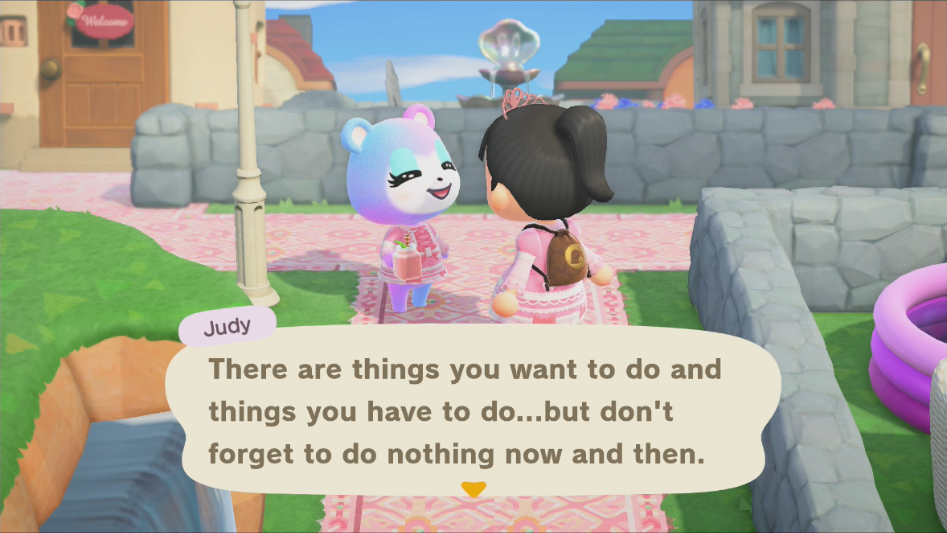 I don’t have time to do nothing, okay!!

Moving on, I gave Teddy a new hat and Margie asked if she could call me Princess too.

Filia then was at Lopez’s birthday so I stopped by for that birthday today! He was also in August and the fluffy clouds are so beautiful in this game.

I then did some more crafting visits. 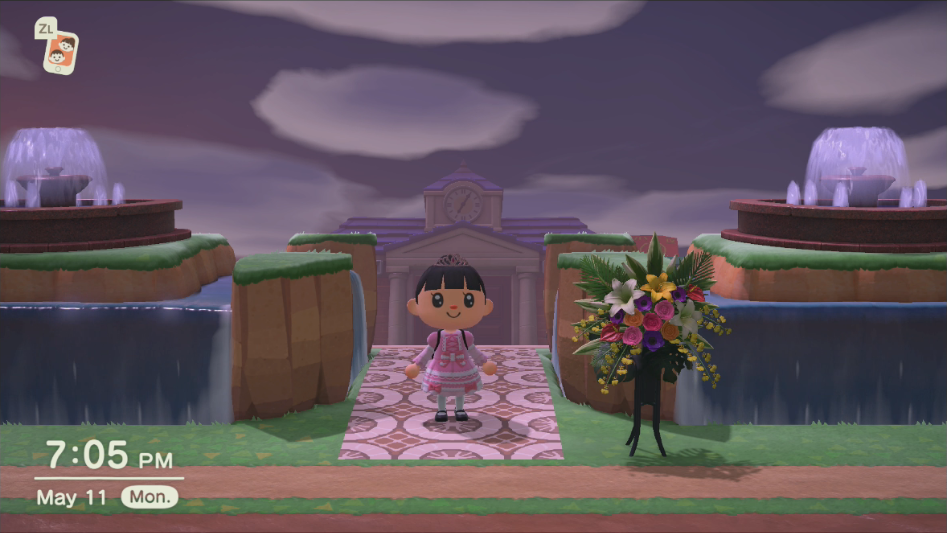 And made another birthday stop! 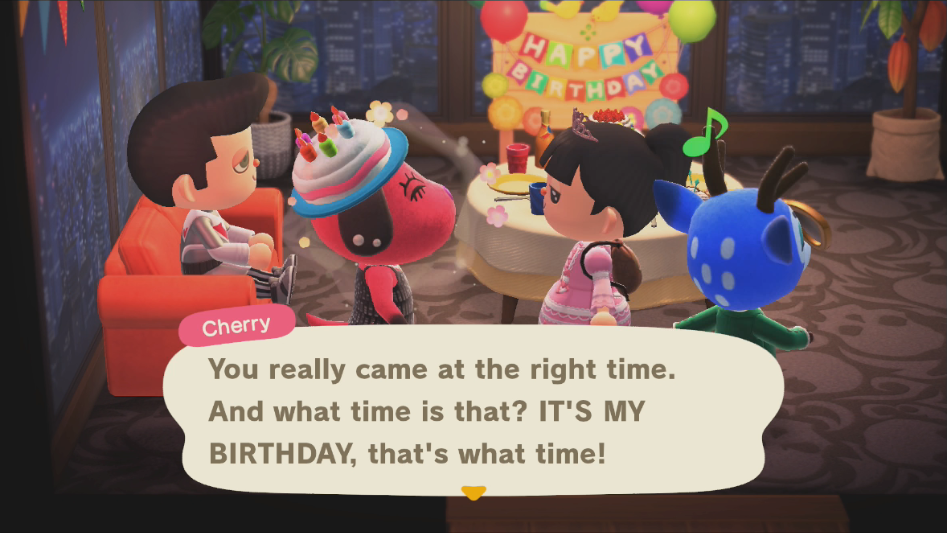 The only other thing I really ended up doing was experimenting with a waterfall trick where you can kind of jump through it– unfortunately, I could only get it work when entering from the back… Not the front :( Which stinks as I had the perfect use for it in two areas, but oh well… Though, considering I think it’s a glitch, it’ll probably get patched eventually anyway so maybe that’s for the best.

I really need to stop procrastinating working on my house v-v But I need to work on getting rid of more stuff in storage first. And get the rest of the things into the image list.