Despite inviting her and the sold plot, I still never consider it a sure thing until I can check the next day with all the glitches going around so Isabelle confirming that we do have a new friend on the island that is, indeed, Diana definitely helped ease my anxieties about it. We also apparently had a visitor at our campsite too, but priorities first: Visiting Diana. Her house was certainly real and thankfully, she really was there.

I just have to find Maple and Peanut now… But first, I headed to the airport to mail Diana the doorplate I had been saving for her. I have three other gifts for her so I’ll be slowly mailing them out until I can actually gift her directly.

I also spent some time working on Flurry’s yard a little more. 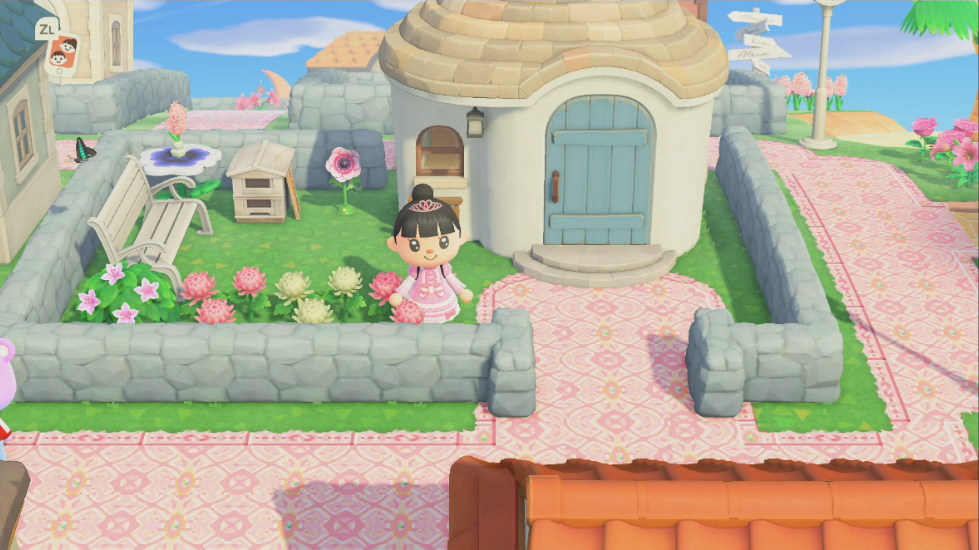 Since she’s into nature and literally has a pet Hamster, I really her yard to reflect similar interests.

Meanwhile, I had books in my Nook’s Cranny today which was great as I could craft some of the recipes I hadn’t yet. 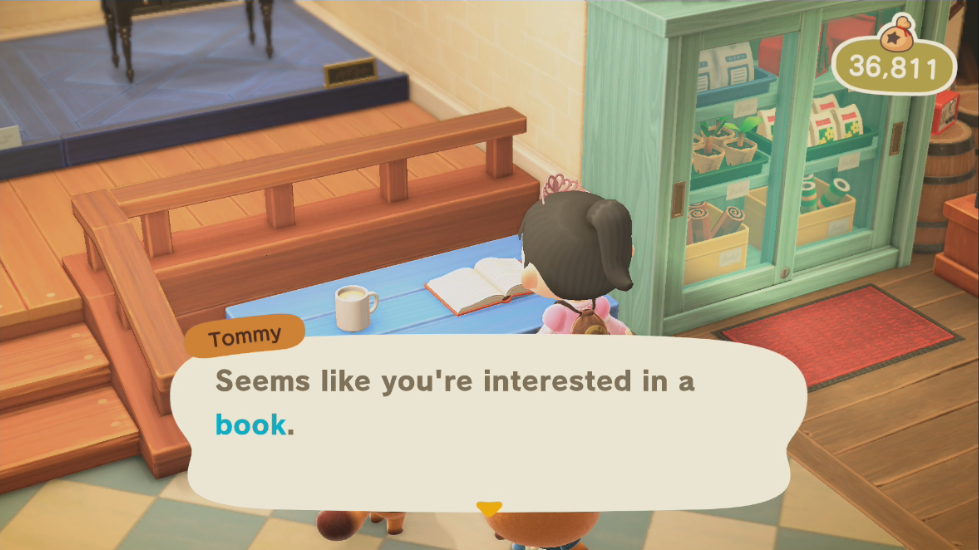 While doing our usual fossil hunt, I stopped in at my campsite to see our camper, but I’m still too paranoid to talk to them. 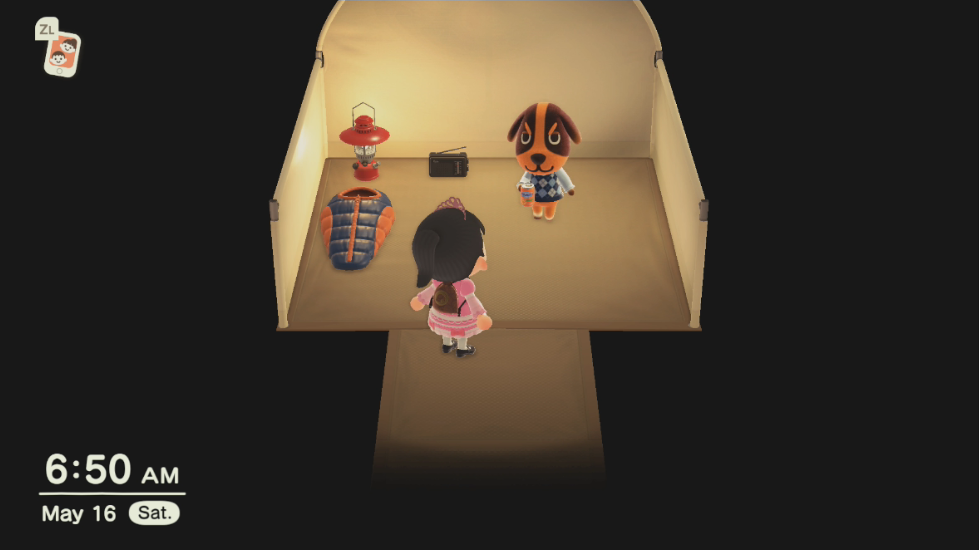 But then frustration hit. 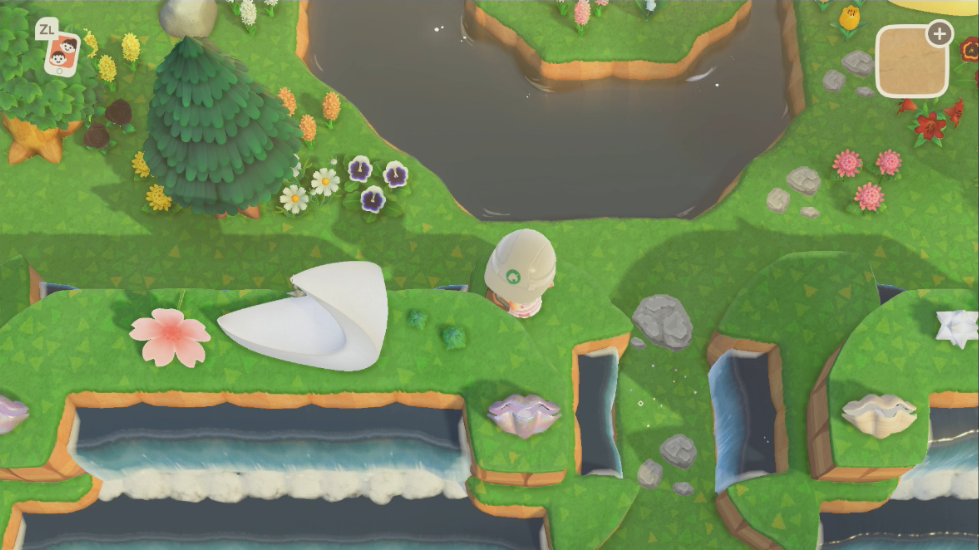 This wasn’t even the only awful weed location I had to deal with today. As more spaces get filled, fossils and weeds pick more finnicky places and I even had a fossil in my little breeding garden again and I just… I want to get all the flowers I need ASAP because this stresses me out immensely. I’m so… specific on how things should look and where things should be and so anytime that gets disturbed, it hits me deeply.

In general, I’ve been struggling with the game a lot between feeling like a failure progress-wise (even when I know that is not the case), certain random/repetitive tasks that feel worse than in prior games, and the feeling of nothing coming out right. I feel incredibly demoralized and the only time I really am enjoying myself in any sense is when I can help others out. Except I can barely do that. I don’t keep items on-hand to catalog, I’m so stressed out and overwhelmed that I have trouble keeping track of things to send out (and only being able to do two a day just adds onto that frustration), I am the worst when it comes to flowers and watering and have none of my flowers even really near each other to breed for others and picking them makes me anxious, I can’t play the market, I suck at earning bells, I am beyond burnt out on resource management, and I can’t even do most “normal” AC things because the idea of breaking even more tools is just too exhausting for me at this point.

So all I can really do is craft, but only if people have the material for me to craft. And even then, with all my recipes, I still don’t even have everything there to really do much. And while some of it I’m fine not having like the Wedding stuff or Golden tool recipes I haven’t earned yet or really any from time traveling, ones that maybe I could get if I had a second town with a different hemisphere do not sit as well for me.

So much of this game just hits differently– not even just the game itself and its mechanics, but the community too. I know so many great and generous people, but the crazy prices in some places, large entry fees (or even in general), and what people tend to ask for, it just kind of baffles me. There are people who can easily work through those things. I’m not one of them.

I never felt a rush to get the art from Redd for my museum. I never felt so impatient to wait for items from Gulliver or while working on my catalog. Yet here I just want it all done. I just want all my flowers and town set up how I want it to be. I want my dream villagers. I want to stop having to constantly worry about everything.

I want to just be able to focus on helping people and any new events without feeling like I’m 10 feet below everyone else.

It’s hard to put into words just how complicated my feelings are with the game, but the only thing I feel lately is I just wish I was done and my only goals were working on Nook Miles (which I’m barely even looking forward to as they’re even more grindy than some of the New Leaf badges were), waiting for new events, and helping others out.

Ignoring my eternal breakdown over the game, I spent some time working on other areas.

I recently noticed the Secret-Hidden-Grove is technically missing Pear and Apple trees in the main grove area, but you can technically see them right above so I’m not sure if I should switch some cherry ones out or not. I’d just add them if I could put trees closer, but alas, I can not.

Going back around, I had gotten a nice letter from Cookie thanking me for the tiara. 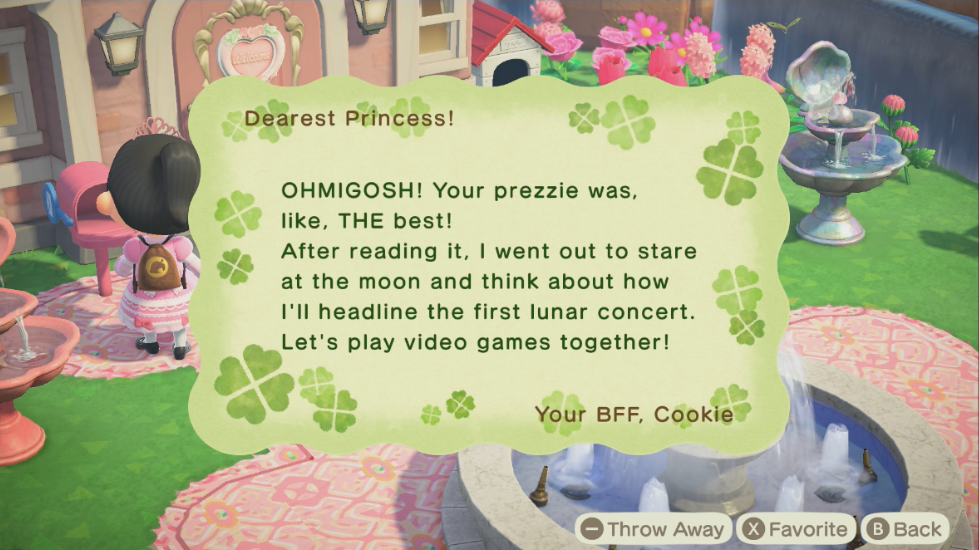 I also stopped by a friend’s giveaway. 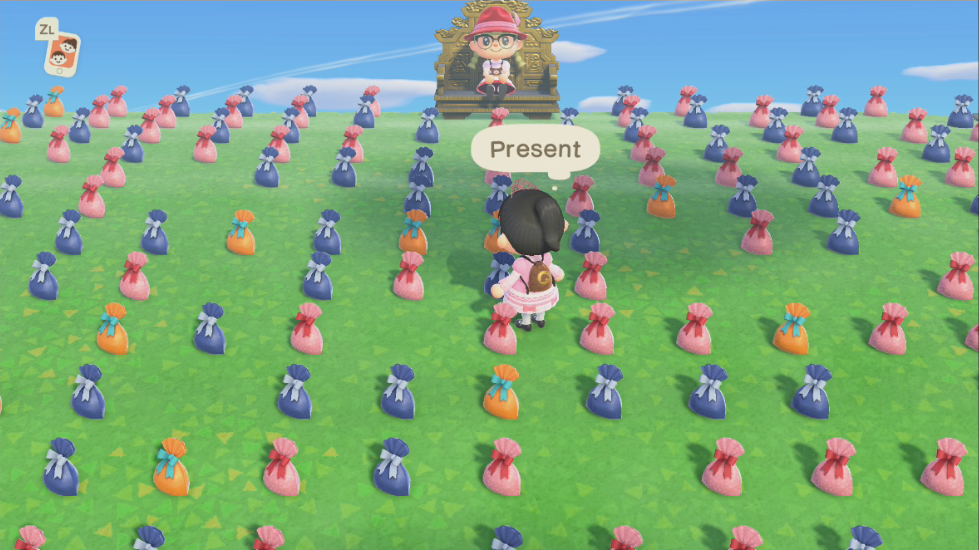 For my 10 items, I ended up getting a Mush lamp, Hyacinth lamp, 40 Nook Miles tickets, Harp, a Fossil, a Royal Crown, and a Common Painting. Of them, I was most excited for the painting, but it was all nice things.

The highlight for the day though was the giant crafting party over at Meg’s. We extended from flowers to just pretty much everything and it was fun just getting to craft a lot of things without the constant stress of resources. I even got to make tons of things I hadn’t crafted yet plus recolor some things I had never gotten a chance to. 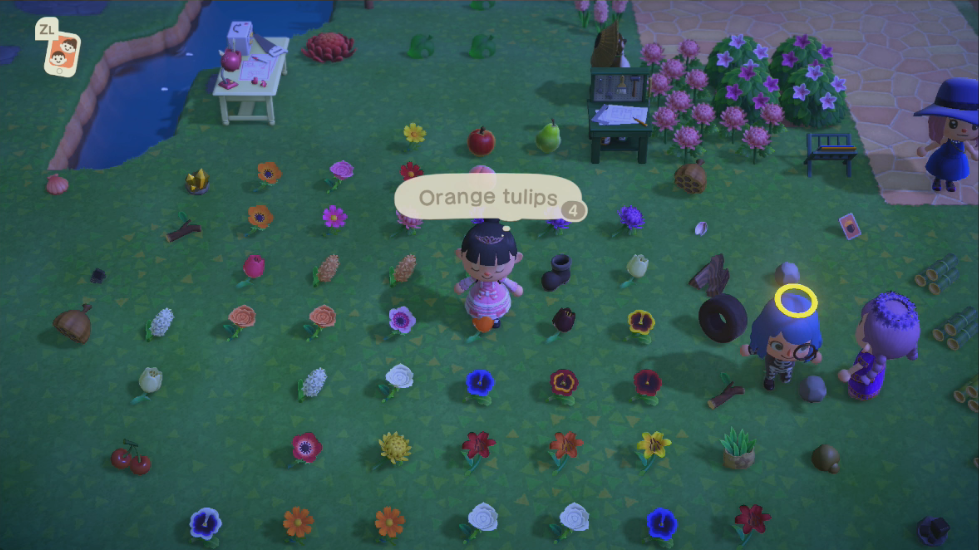 It was the first time I think I truly had fun in a while.

The day finished off with a K.K. Slider concert of course. I’m not particularly big on most of his songs and at this point, the only song I still need is K.K. Birthday which I can’t get until my birthday, but I do still need to attend a concert each week for the Nook Miles thing so…