Normally, I don’t make entries just for one event (okay, wait, that’s a total lie, yes I do), but I also want to use this entry to talk a bit about the game they are from (As you may have noticed from the QR Codes, anyone I don’t actually know is from some kind of game or show) and how I ended up playing it. And a bit of a dedication to the friends I met because of it (you know who you are!).

Subaru had asked to propose (which I found interesting as he also was the one to confess–I’ve found it usually switches), so I picked the Fireworks for where as it was only fitting: 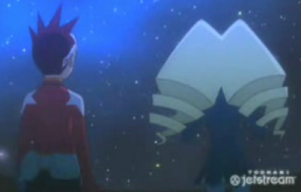 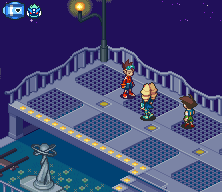 Luna obviously said yes which lead to the wedding ceremony: and them enjoying their new house: They are also my first married couple to both be confident which means they have a new house style. This is probably the easiest time I had with a pairing I wanted to get together. They became best friends nearly instantly (despite how many people were in the apartment by the time I put them in) and I’m pretty happy they got together considering they are one of my favorite pairings and one that is very special to me!

Mega Man Star Force is actually the only Mega Man series I’ve played. I knew Roll from when she was a secret character is Marvel vs. Capcom and Ciel (and Zero) because the Zero series is my fiancé’s favorite. Obviously, I also knew the main character and Rush, the dog. Besides that, I only knew who created it, who produced it, and some of the music from it!

The day Mega Man Star Force was coming out in the US, Mr. Inafune was doing an autograph signing in NY. My fiancé asked me if I could go and get an autograph for him and so I headed into the city early that morning and got a spot (I was about #4 in line–most people ended up showing up much later). It then hit me that I didn’t have anything to be signed. Used to just getting things like a notebook page signed from Disney, the idea of actually getting a picture of item signed is something I forget. A lot. So I quickly ran into the store to see if I could buy something to get signed. I noticed Mega Man Star Force listed which felt perfect since it was the brand new game and since I was at a Gamestop, I’ll get the exclusive version! Perfect. I even picked up two so I could play it and maybe not feel so out of place.

That said, everyone was really nice. Nobody criticized me–anything I had to answer was for people doing press (and things mostly like “If you could add anything to a game, what would it be?” which was still hard!) and thankfully I wasn’t included with stuff so… I was especially impressed with the person next to me. They made this AMAZING poster of Megaman and every enemy that had been in the games for Mr. Inafune to sign. It was really beautiful and amazing and I still feel bad I don’t remember his name. He was super super super awesome and nice though! (And really talented. Just wow.)

So, I played my Starforce game so I would feel less stupid there and I -really- liked the characters. Luna and Subaru/Geo became a quick favorite after the whole scene when he called her a Satellite. After finishing the game, I watched the Anime. The first time, I stopped rather early. And I’m going to say right now, if you haven’t seen the Anime–play the game first. The anime really kills almost all of Luna’s character development and completely ruins one of the biggest character driven scenes of hers in the game. I eventually did finish the Anime after stopping at that point and I’m glad I did–Episodes #46 and #47 are really great in that aspect, though, the whole Ophiuchus episode still makes me sad.

Mr. Inafune was very nice. He even signed both games and both T-shirts (they gave out T-Shirts so my buying the game twice wasn’t actually needed but I don’t regret doing so!) and I had a very good time. And got a new game I really liked with characters I found really awesome which lead to meeting lots of great people. So yep! Very happy for this. 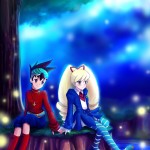 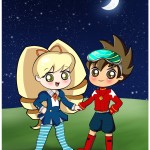 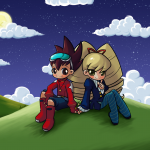 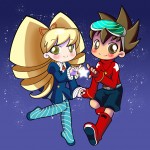 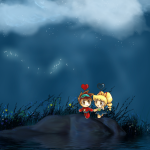 (Each piece I commissioned ages ago by, in order from left to right, top to bottom…: Pinpin, madmoiselleclau, Miku, Danime-chan, Aresa, and Kawaii-Kitsune)

And for those who this have may been too sappy for, please enjoy this picture of my Mii sleeping on a bench instead: