So, something I found interesting is that three days before Halloween hit, some of the special villagers actually started dressing up which was really cool to see.

Even Resident Services had some pumpkins placed outside. 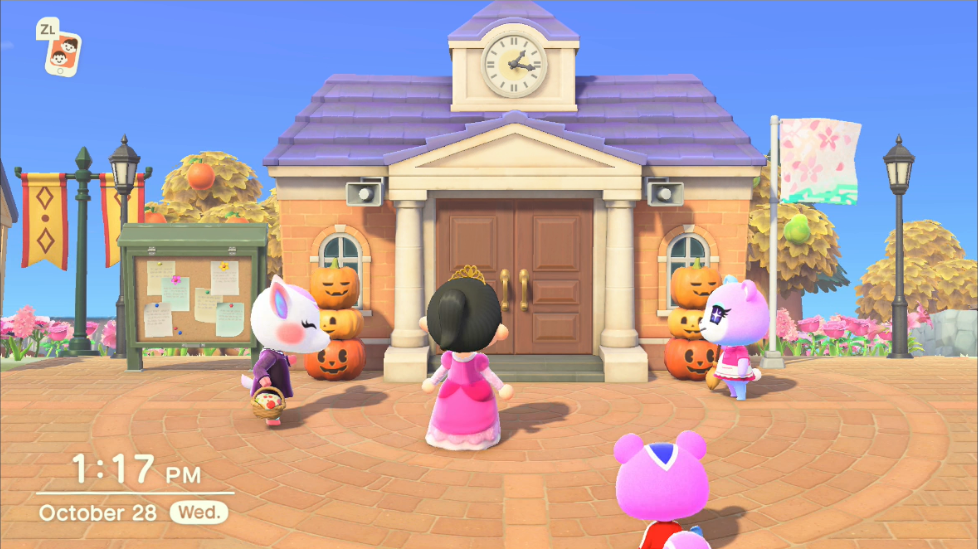 And while Villagers weren’t dressed up yet, they were still excited for the season.

Regardless, it’s finally Halloween and I was both excited and nervous for the event. I don’t really enjoy Halloween as I can’t really deal with horror at all and past Halloween events in Animal Crossing have always kind of terrified me so I really can’t say enough how relieved I am that there’s no chasing this time around and tricks aren’t as cruel.

I started a bit early and was surprised to see even more decorations added to Resident Services.

5PM then hit and thus, the event officially started! 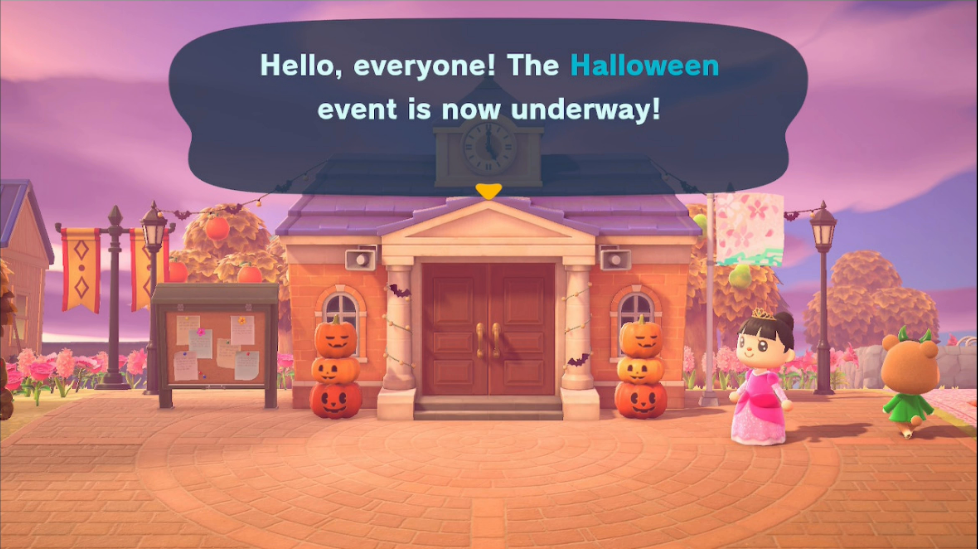 Merengue immediately ran over for candy and then also taught me the Scare Reaction.

I did my best to give candy to all my villagers.

I ALSO JUST NEED TO TALK ABOUT TEDDY’S COSTUME… 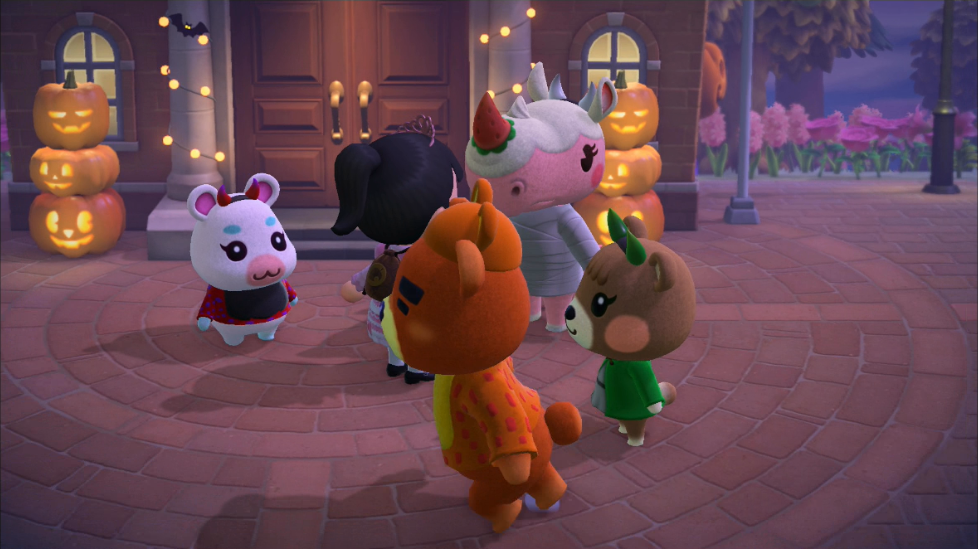 Even though Diana had kind of similar, the ears aren’t really the same on hers and its a different color than her fur, but Teddy literally picked the same ear type AND color as him and that hat just looks so funny on him.

Meanwhile, Jack was here, of course, and I actually had a kind of hard time finding him at first. While he wasn’t far, he immediately wandered away from the plaza which I didn’t expect. Besides giving me an item, he also taught me the Haunt Reaction.

I still don’t think it looks particularly haunting– it just looks like my character is getting possessed which I guess is haunting in itself, but I don’t feel was what they were going for. I don’t think I’ll really use either anyway, but at least it gets me closer to the Nook Mile requirement.

Even though I didn’t need candy (I did, however, need more lollipops), I went to visit my villagers who were still in their houses. And Maple told me my costume wasn’t spooky enough and she was only giving candy to “scary” costumes and while offended, I did go and change before going back to her house and further houses.

BUT I’M STILL UPSET ABOUT IT… I wanted to just wear my Princess outfit :(

Regardless, I did end up getting some lollipops for Jack which let me get the other things I was missing.

After finishing with the candy handouts, I headed back to my house to work on crafting and customizing everything. I also ended up changing back as Halloween is done. The wand is cute, but I don’t think I’ll ever use it. 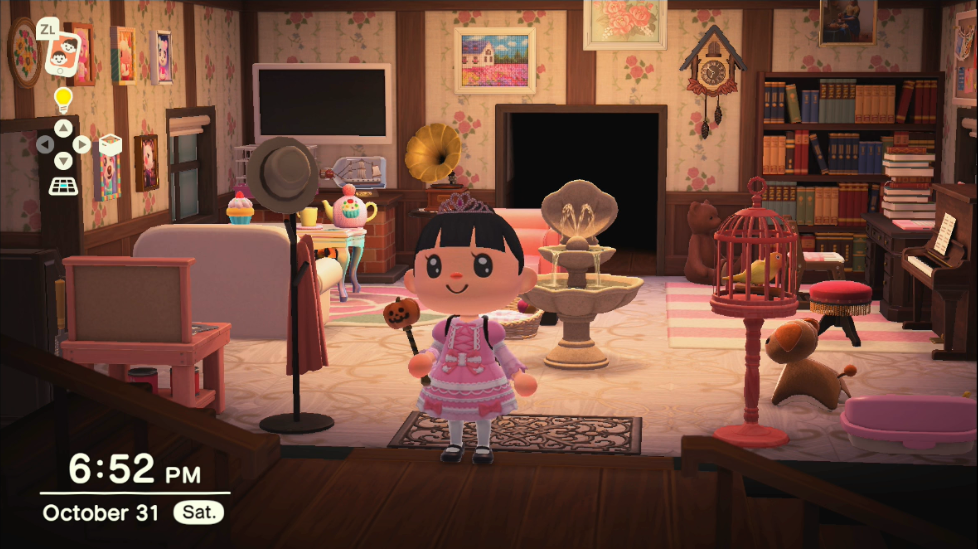 I then made one final spot back at the plaza just to get a screenshot with the fog rolling in and the lights actually on. It’s a bit simple, but still nice. 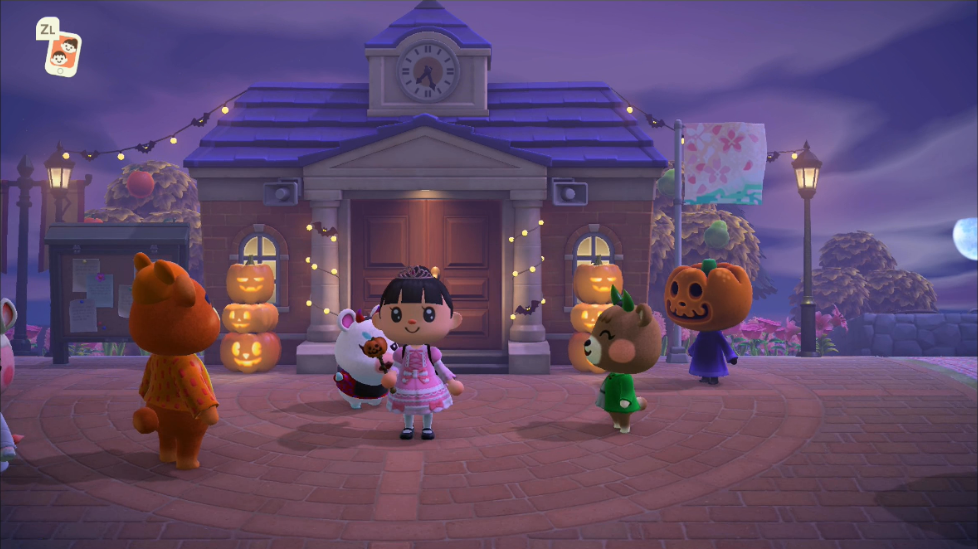