In general, if you watched my video yesterday, you may already know some of the issues I had, but if not, I’ll be talking about it here along with some other feelings.

This entry, barring these issues, would’ve been posted yesterday, but oh well. Regardless, yesterday snow finally starting sticking to the ground. I actually love when the snow starts falling and I really like the Winter-look (The light mint color of the leaves is so pretty and I wish I could mix parts of Winter and Cherry Blossom season together…) so my general feeling was excitement, at least at first. 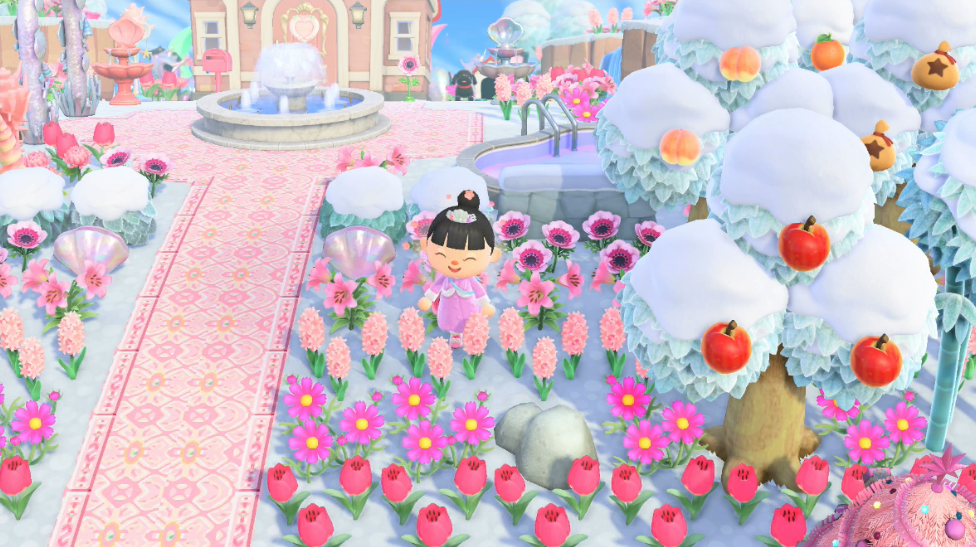 I had set aside a small area in advance putting the chess set near Able Sisters somewhere else in the meantime. Unfortunately, there was one “small” problem. The area was too small this time around for the Snowballs to spawn.

I was expecting it to be similar to New Leaf where I could remove a few flowers and have it spawn in the empty spaces, but that… was not the case. I needed a much bigger area. After a quick tour around, there was really only one place that could work and thus, I had to uproot the small orchard behind the village area. As expected, the snowballs spawned there immediately after reloading.

And then it was just… a long time of waiting for a Dung Beetle to spawn as it was the last bug I needed.

With that out of the way, it was time to work on my very first Snowboy. Only to hit a new problem. After measuring out carefully, it turns out there was another frustrating change from New Leaf: You can’t make a Snowperson on flowers. So as I continuously tried to push the smaller snowball onto the large one that I had placed into some flowers to make more room for rolling (especially as rolling them felt harder to control between how they’re kicked (and somehow not destroyed??) early on and then how they roll later– I get it’s more realistic, but I’m not exactly playing a game with Animal Villagers for realism), I also was making the smaller Snowball bigger.

After moving the big one out, I placed some paths down to try and make the smaller one a bit smaller again, but alas, did not manage to do a good enough job and only did a “nearly perfect” Snowboy. Which also meant I couldn’t unlock the Nook Miles Stamp/Card just yet.

With my failure set in stone, I went to donate the Dung Beetle to the museum at least much to Blathers’ delight.

I honestly am curious now what would’ve been said if you completed the museum before the Art collection was in and then beat it again. Regardless, the Dung Beetle now has a happy home though I am kind of concerned about it sharing its exhibit with the Scorpion… 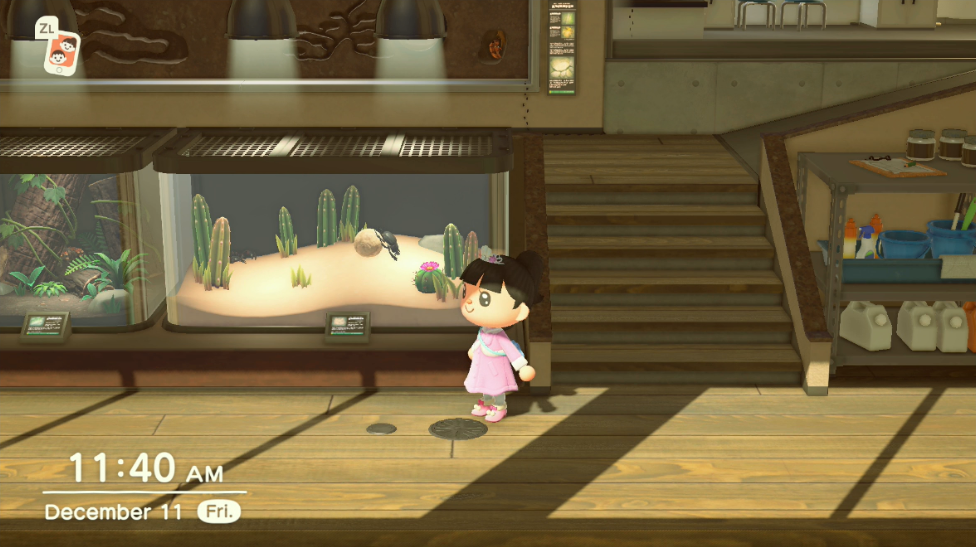 I pretty much stopped playing after that, frustrated, but the next day, I did get my letter from The Farway Museum with the Golden Net DIY. I already had a Golden Net from a friend, but it’s nice to actually earn it. 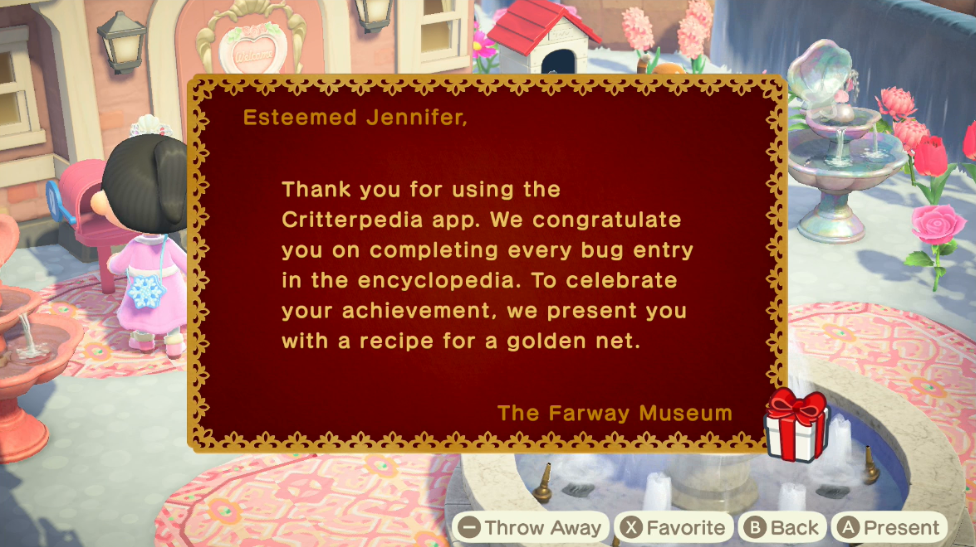 I then made my way back to Snowball field to try my hand at once again making a Perfect Snowboy. And thankfully, succeeded.

And that was… it. I don’t think there’s really a good way to explain when you just feel your goals kind of begin to crack and shatter, but it’s how I felt between ruining an area of my island, suffering to make a perfect Snowboy, and then getting that stamp where I would need to do this 19 more times to complete it was soul-crushing. 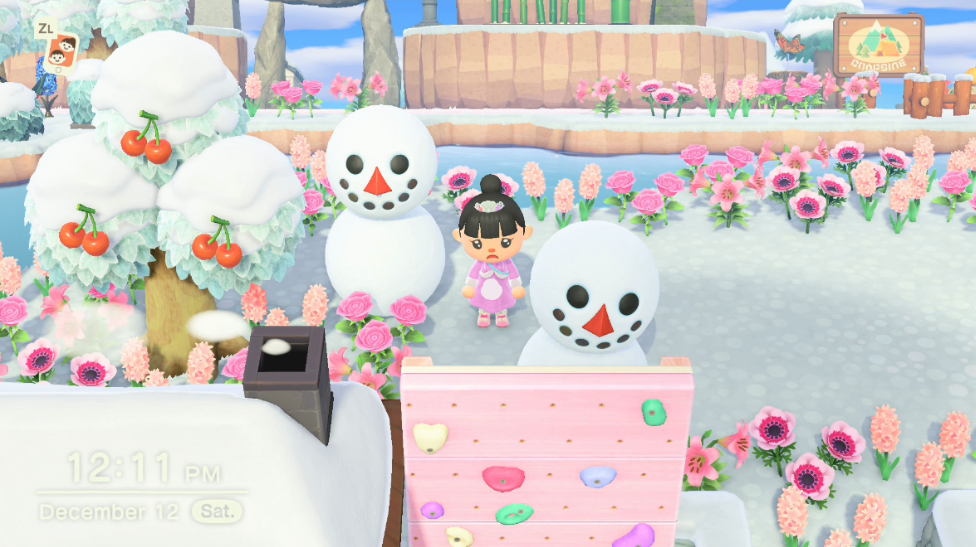 And if I’m not going to complete it, I don’t exactly feel motivated to continue with the other Nook Miles. I’ve mentioned before how Nook Miles Stamps feel so different compared to earning the Gold Badges and I still feel that way. While I felt I had some level of control in New Leaf, I feel like a lot more of the New Horizons ones have walls and other obstacles to make things longer. And like… Why does Snowmaestro need PERFECT snowman? Why aren’t just not-bad ones good enough? I’d think those would be “quality” too. New Leaf was about encouraging you to do what you love. New Horizons is about doing it a certain way to matter.

Maybe I’ll still try some of the more simpler ones like the selling fruit one as I’d like the words for some of the Stamps from that… But as for certain titles from completing Nook Miles+ things and Snowmaestro, among finishing in general, I don’t know if I can deal with anymore.

At this point, I feel more like I just want April to come back around just to upload my Dream Suite and be done with the game because it’s beaten me down so much, I barely want to play it anymore. It’s ironic how the game that added things for “more freedom” can feel so overbearing this time around and it really breaks my heart.

Moving onto something more positive, the other day Judy was unfortunately sick. I still am kind of surprised she’s Snooty, but I really do adore her. And outside of the weirdness of the Block furniture being used (I blame the lack of several sets– I bet she’d have loved the Rococo set), her entire room is just incredibly aesthetic. I hope they make Amiibo cards for all the new villagers. 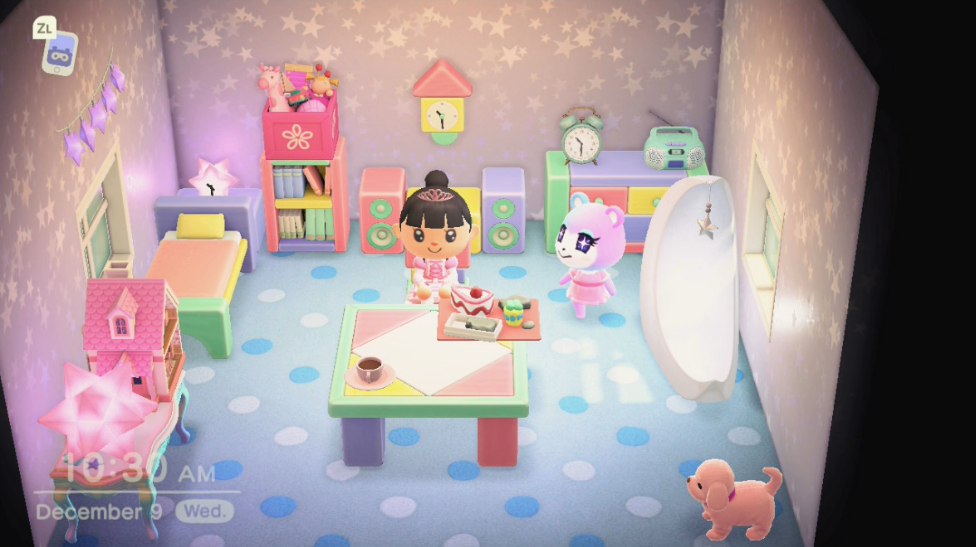 If I could ever afford to, I’d love to get plushies of all my favorites.

Anyway, I don’t know, I’ll likely still pop in each day for now, but it just… feels so much more like a chore than any fun at this point. I wish I was still enjoying myself.