Happy Holidays everyone :) It was Toy Day yesterday in New Horizons– I did my best to knock it out before having to take care of my own Christmas Eve plans even if it’d probably have been more appropriate a bit later in the day. Regardless, my playthrough of the event is already up on Youtube as well as the day after so feel free to watch those as well if you want to see more than some of the screenshots.

Before we get into all the Toy Day stuff, a little on the lead up! I was really excited to see a tree actually get put outside Resident Services in conjunction with some of the Cedar trees now being decorated.

The Plaza was even nicer at night. 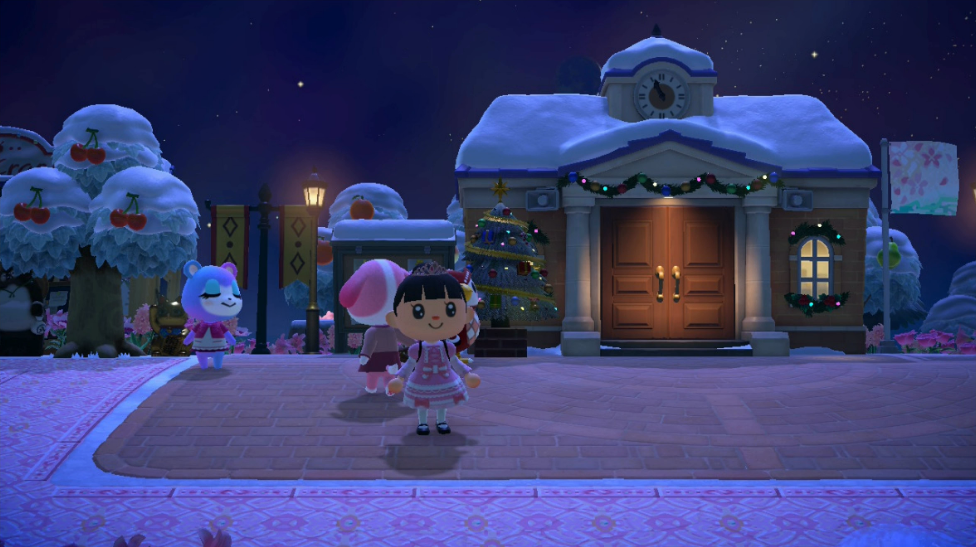 I also received a gift from Maple– a Festive Wreath! 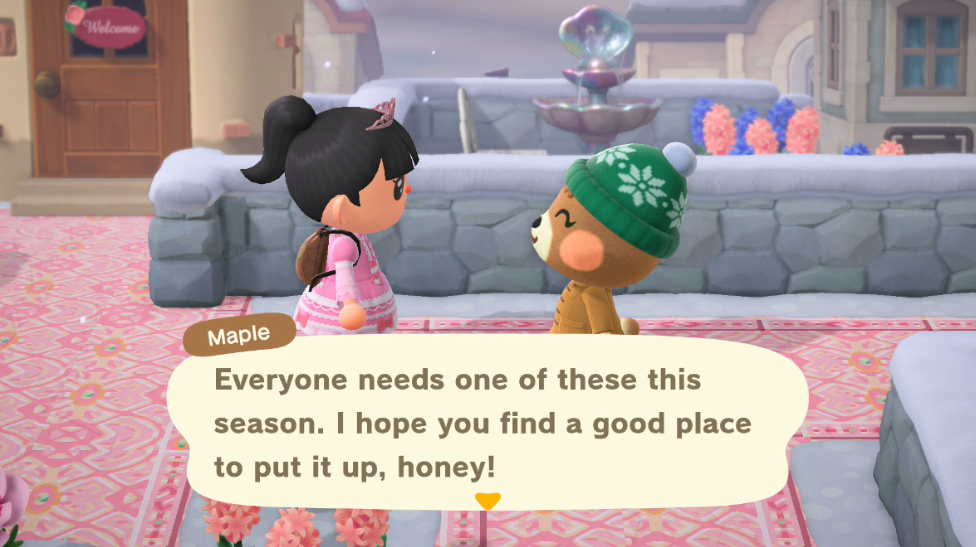 I also got a letter from the Perfect Snowboy with a Frozen Tree. 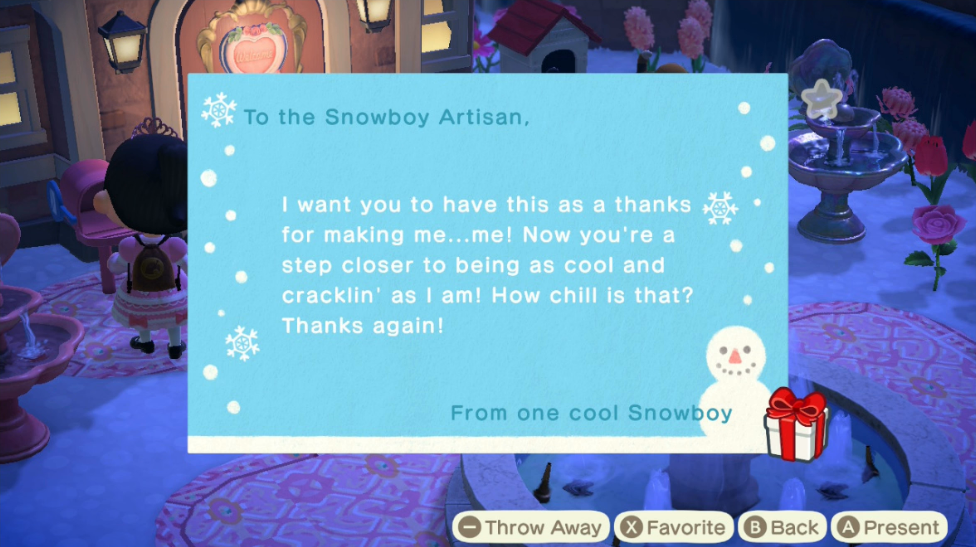 Finally, some cute screenshots enjoying the Winter mood before we start talking about Toy Day. 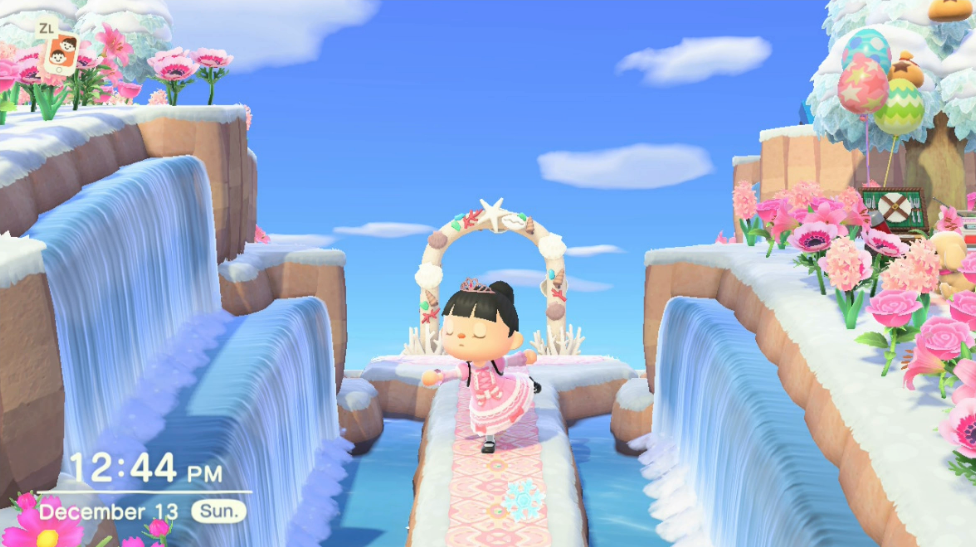 Knowing I’d probably be delivering presents, I decided to dress the part the night before. While there is the Festive Dress, the lack of sleeves while in the Northern Hemisphere felt silly so I made use of the Santa Top and a nice skirt. The shoe decision was the hardest part! I was originally leaning towards the black boots, but in the daytime, the brown honestly looked better.

I immediately headed to the Plaza to meet Jingle as soon as I started playing. 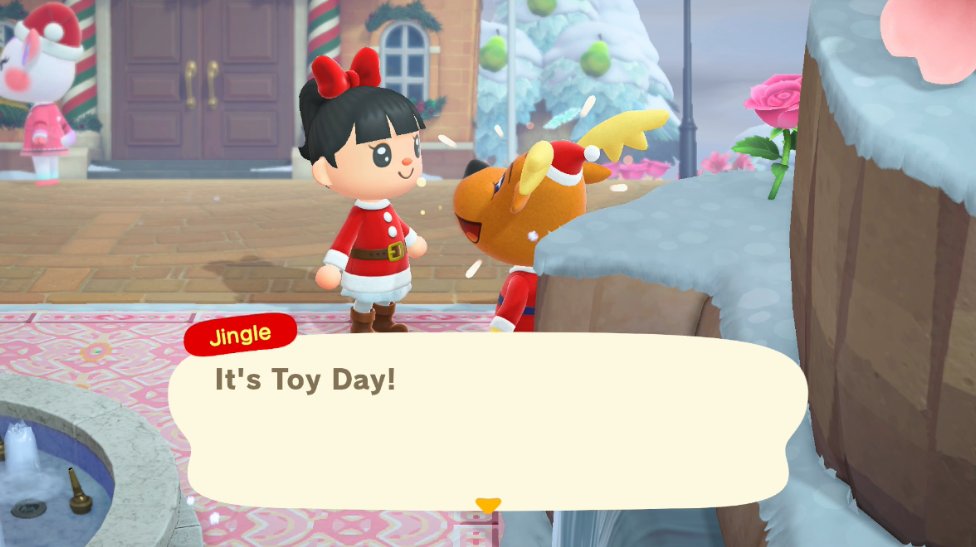 As a side note, I really the Resident Services decorations. 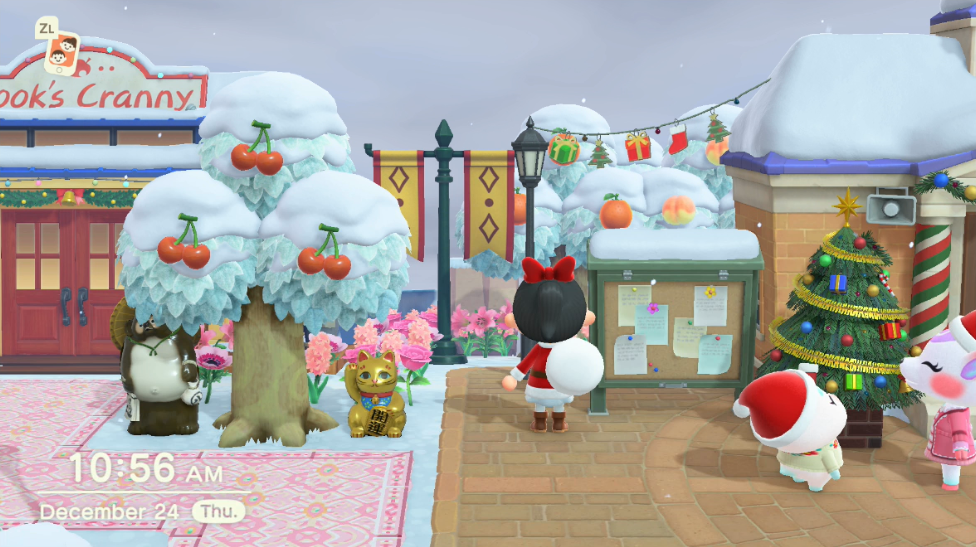 My first task was to make some wrapping paper.

I ended up making 14– one to keep, 3 for Jingle, and 10 for the presents I had gotten my villagers. I had hoped to give them their presents before starting the Jingle job, but to my surprise, it seemed I wasn’t able to. I kind of wish I spoke to all my villagers before continuing the next part to see what else they may have said about the Holidays. 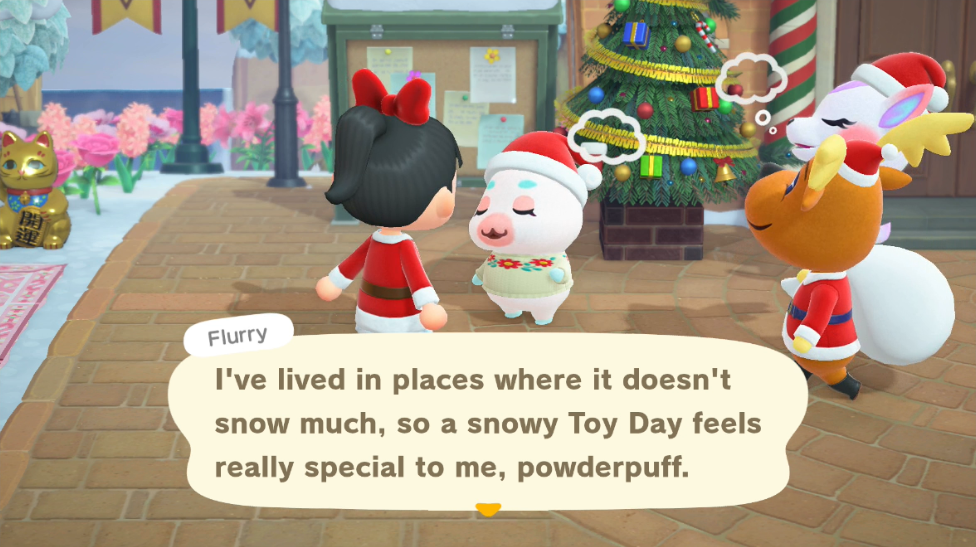 So, I headed back to Jingle to give him the wrapping paper.

Jingle then asked me to take over the gift giving as one of the greatest joys is seeing people’s expressions/excitement when giving gifts and he wanted to share that feeling. 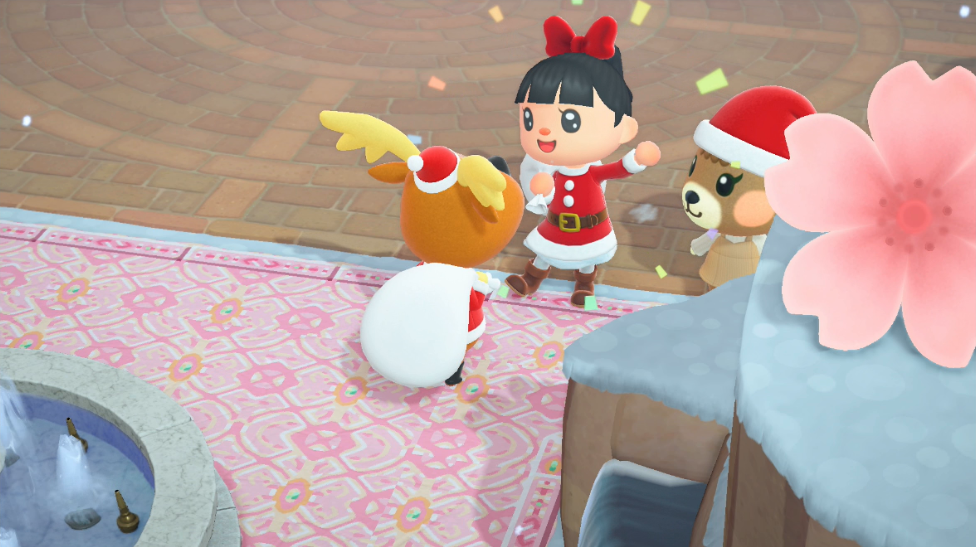 Honestly, I agree with him. One of the things I’d love to be able to do, if money situations stop sucking, is give gifts more often to both friends and strangers. I just like helping people. It’d be nice to be able to make more people happy.

It was then time to go around giving gifts! I didn’t screenshot everyone due to some dialogue repeating and also having only so much time to play, but I had a lot of fun giving gifts and seeing the villagers excited. I think what surprised me the most was when some of them gave me gifts in return during all this along with asking to exchange gifts later. 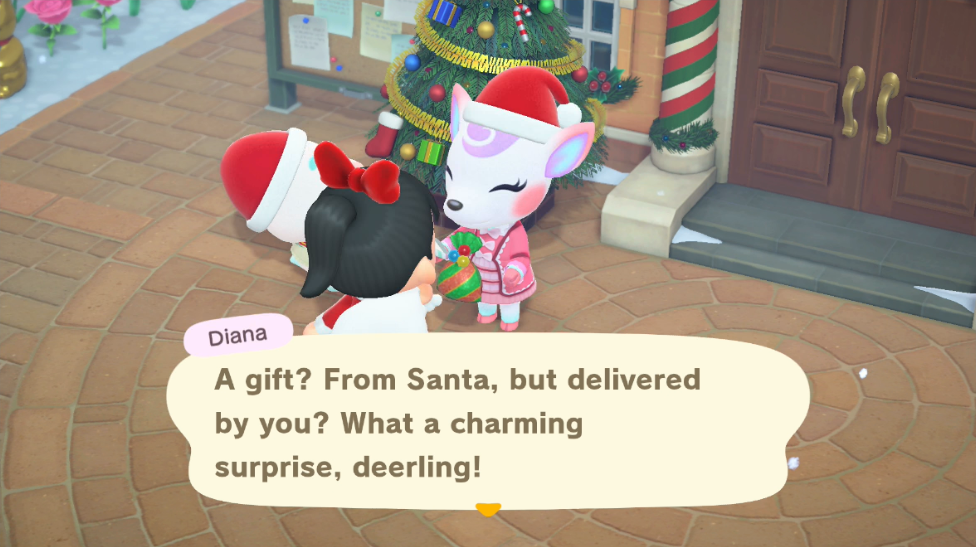 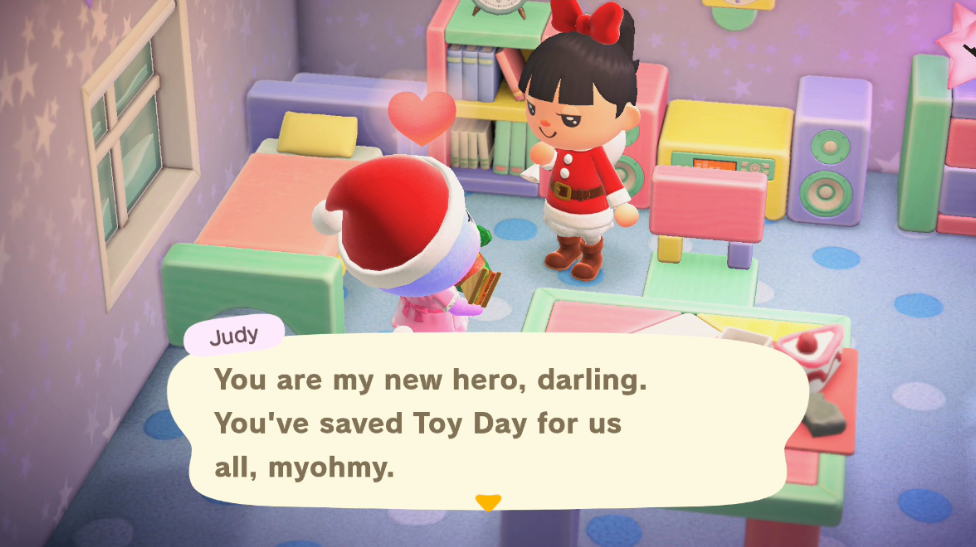 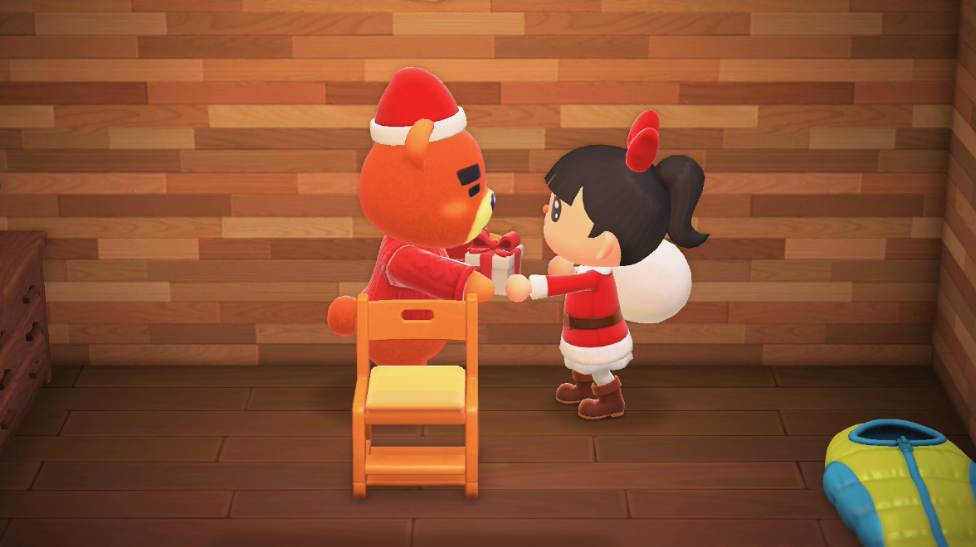 I think Merengue’s, Judy’s, and Teddy’s comments hit me the most. Regardless, with the deliveries done, I made my way back to Jingle. 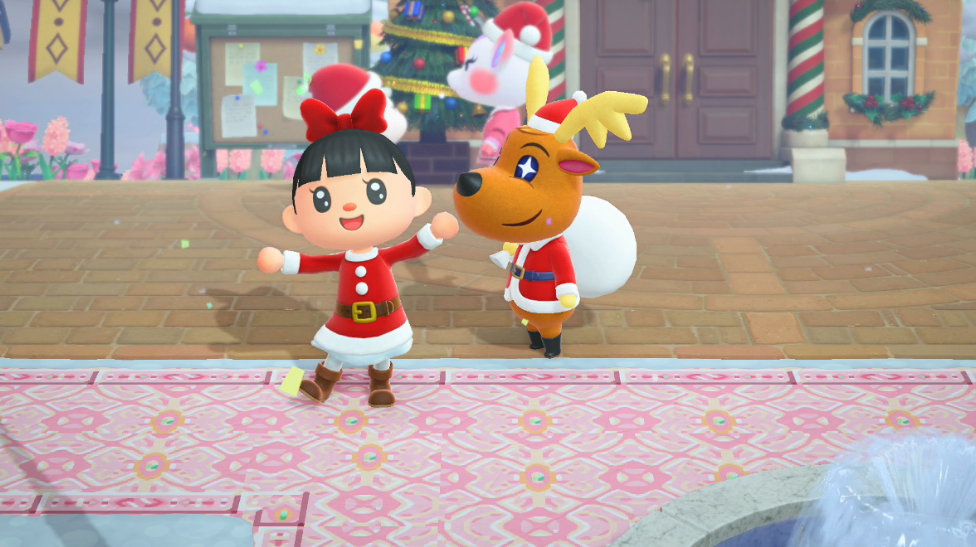 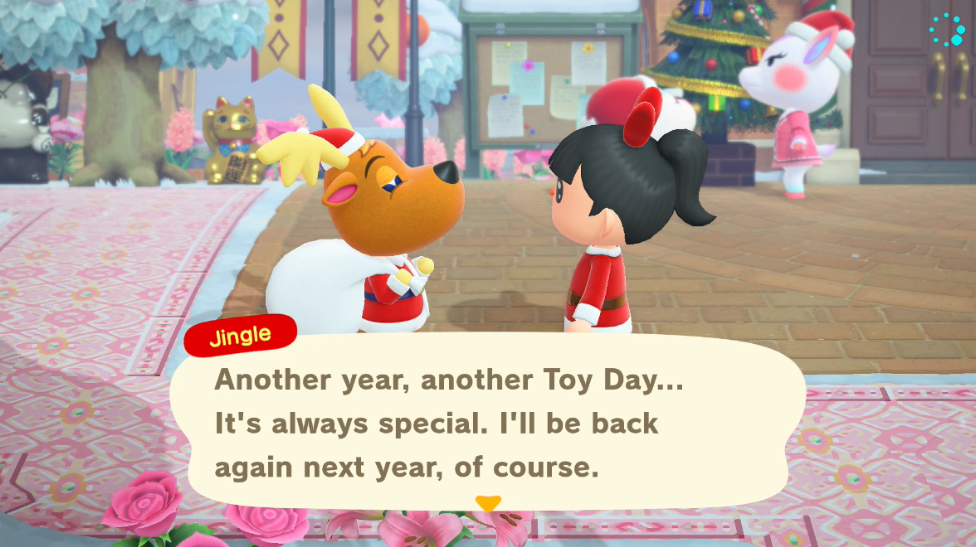 With deliveries for Santa and Jingle all done, it was time for the gift exchange will my villagers! Again, didn’t screenshot everything due to some repetition, but I did get gifts for everyone! 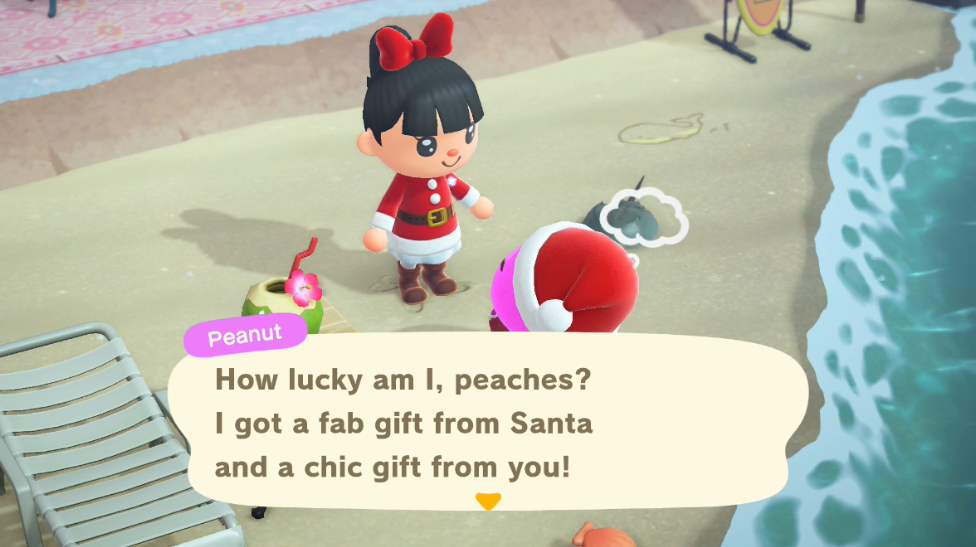 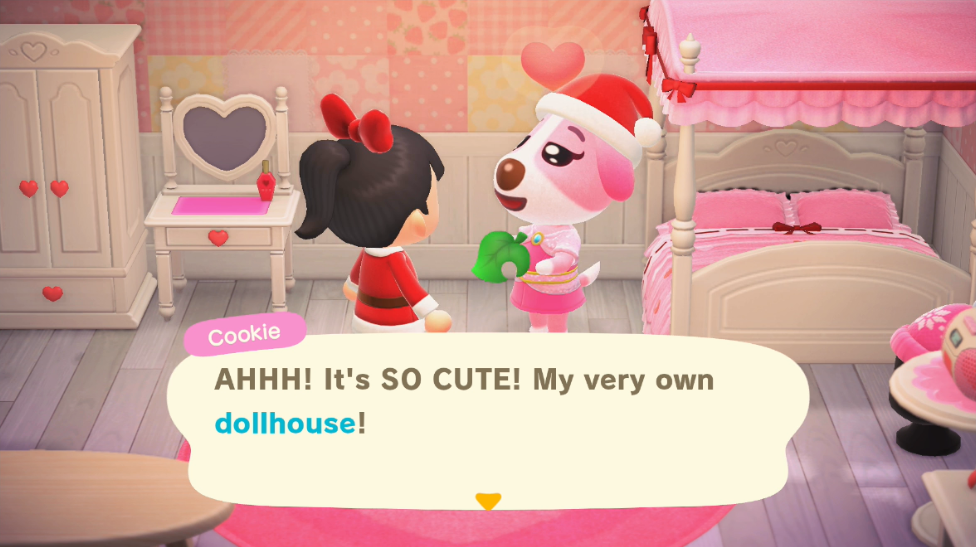 Honestly, the whole thing was so much more heartwarming than I was prepared for.

As for the gifts from Jingle… I got the gift box DIY and actually made 7 so I can have one of each color.

And after seeing the sled was a lot smaller than I anticipated, I had the perfect place for it. 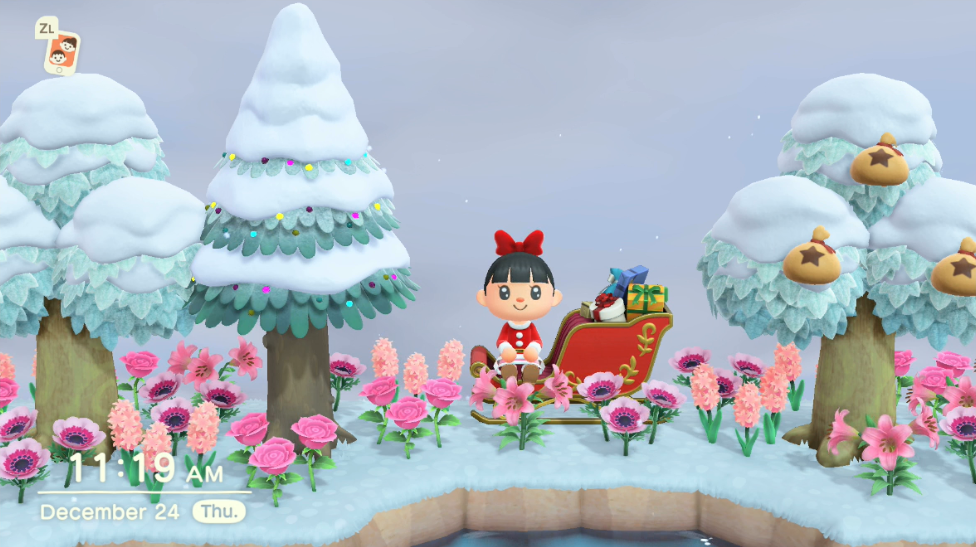 As for the stockings… I didn’t really have room in the living room, so I ended up putting them in the Kitchen: 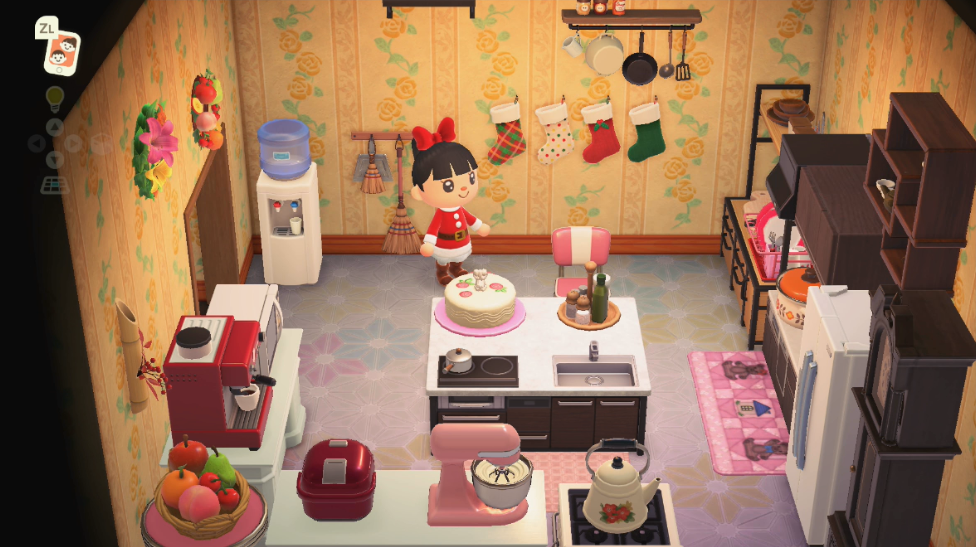 As for today, well, I went to check my stockings as advised by Jingle… 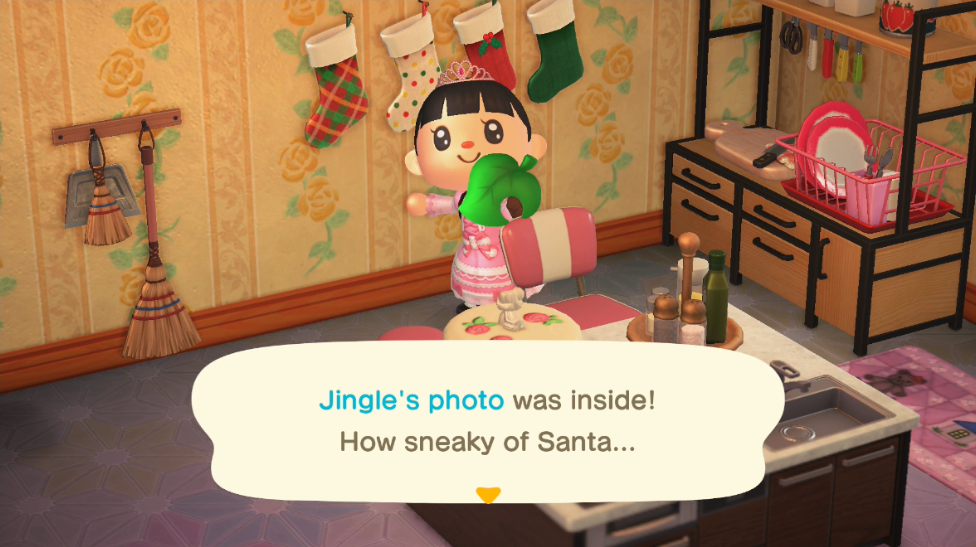 Honestly, it’s kind of a gift when you consider it, but it’s really neat for it to be set up like this too.

To my surprise though, when I went to talk to my villagers today, each of them ended up starting out talking about how thankful they were. Once again, some of these hit really deep, even if there was some repetition with my normal villagers. 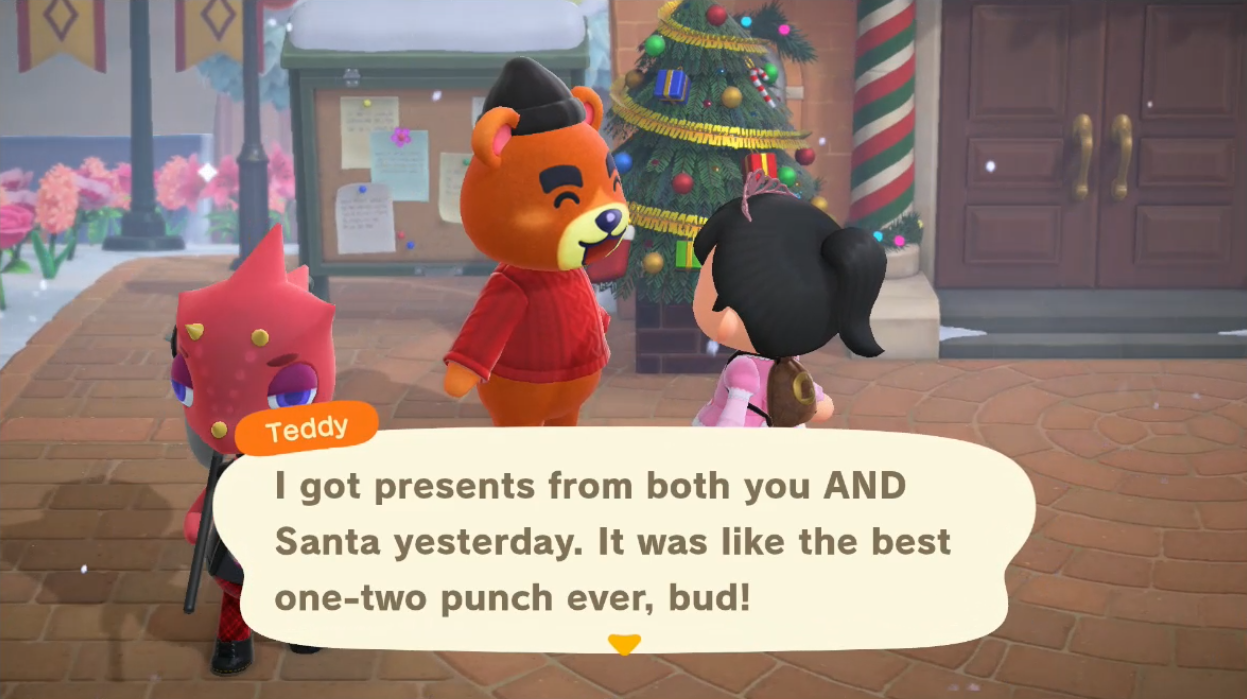 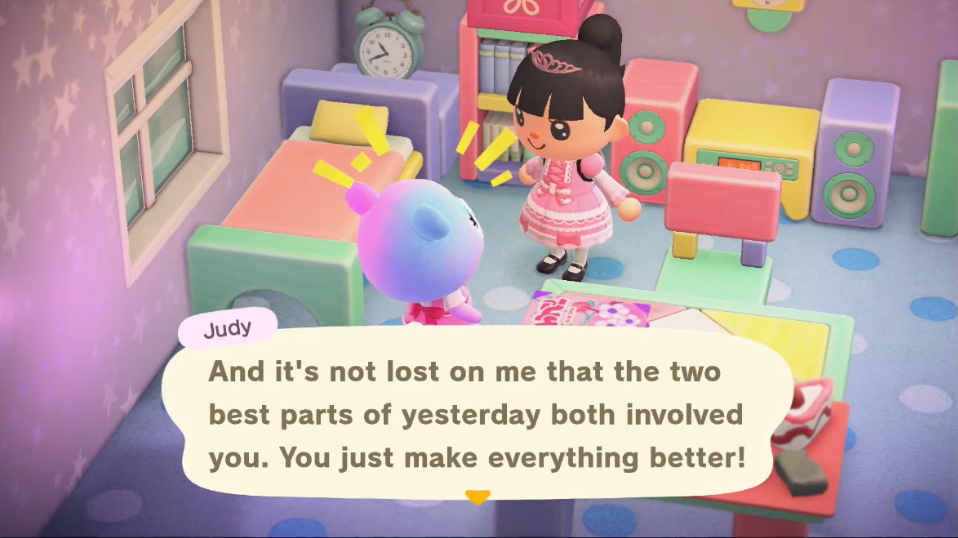 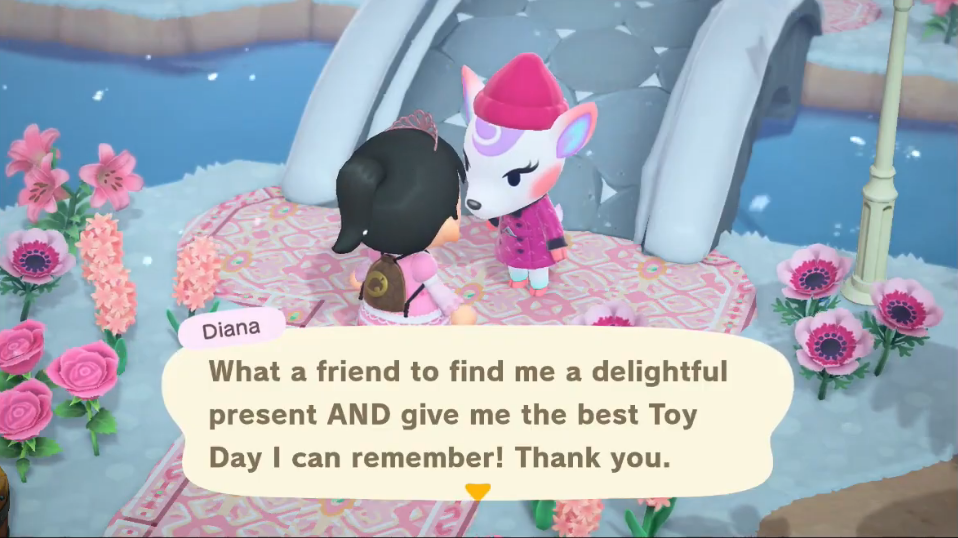 I don’t know what I wanted from Toy Day or what I was expecting, but it was really warm and fulfilling and I’m glad I got to do it. Tomorrow the new Nook Shopping seasonal items should be available and then it’s just the wait for New Year’s Eve…