Despite that, I have done my due diligence to wait until the proper date to celebrate the New Year, even if doing both the event while also spending time with family has always been a weird balancing act.

Of course, the celebration started a little bit early with various new seasonal items available in the Nook Shopping app until today that are right in time for New Year’s Eve along with an announcement about the countdown today! 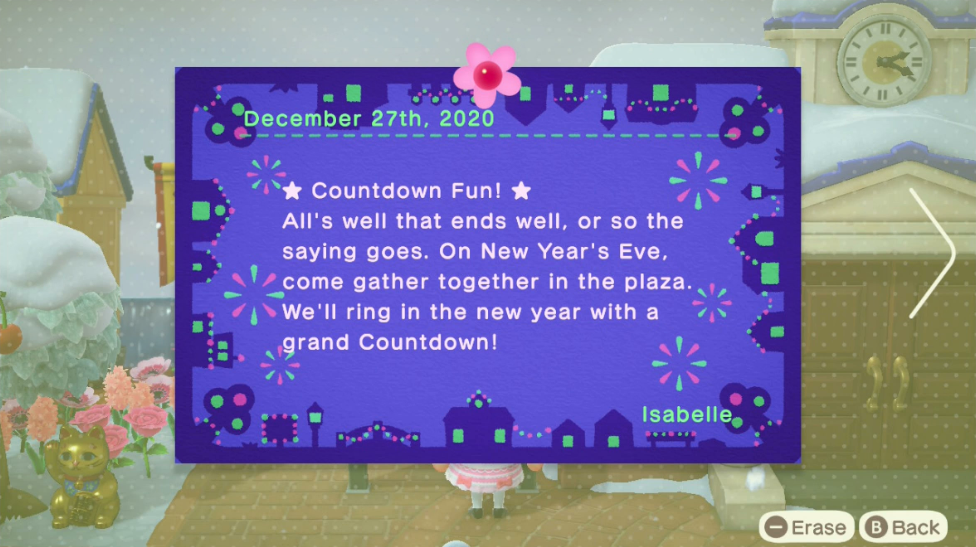 There was also an announcement for Diana’s birthday. I already picked out a present for her. 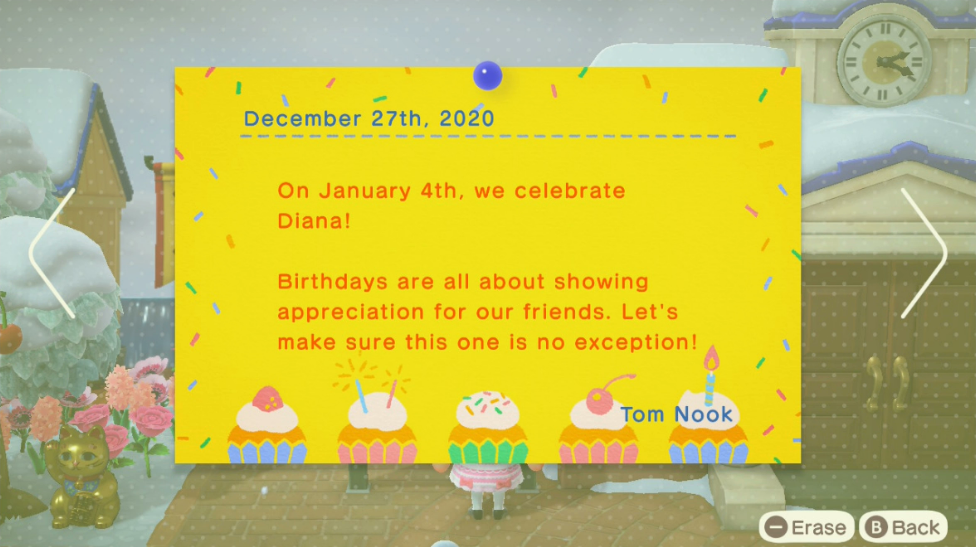 Regardless, it’s time for New Year’s Eve so Isabelle and Tom Nook were both out at Resident Services.

I didn’t expect so many Balloons. I also didn’t expect Resident Services to be completely closed so uh, I hope I have more than enough bells today.

Isabelle had a Light Stick for us. 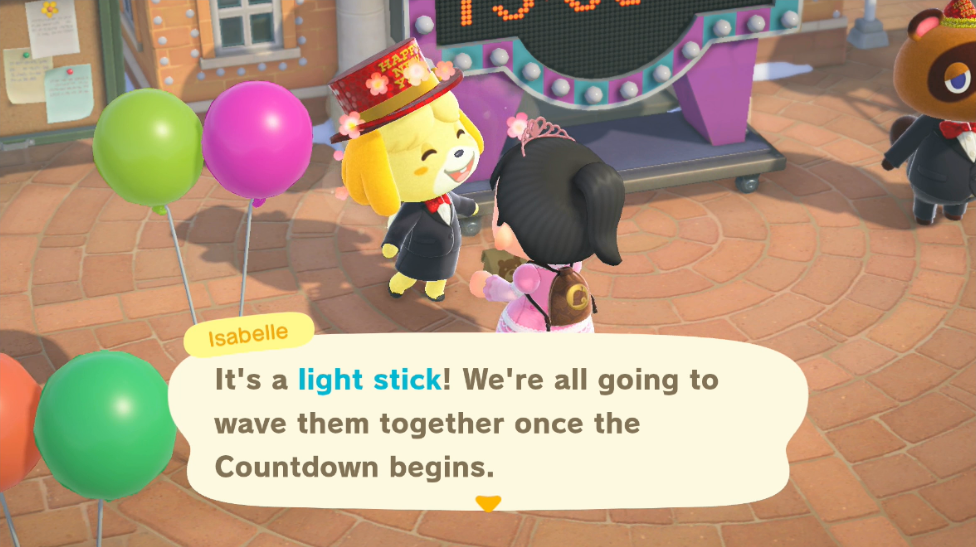 Tom Nook had Party Poppers for us. And was also selling New Year’s hats.

I don’t really like how they’ve made it so you only get half the colors and only one type is available… But I suppose I shouldn’t be surprised considering how many other walls this game has had this time around. Regardless, despite how cute they look on Isabelle and Tom Nook, they kill my ponytail so I’m not wearing one afterall.

Regardless, I took their advice and still dressed for the occasion!

Now it was just the wait until 11PM…

It was fun talking to all my villagers, even if the dialogue was all set by personality so quite a bit of duplicating. I was annoyed they kept making comments about the hat though if I wasn’t wearing one. Maybe I’d wear one if it didn’t kill my ponytail :(

There was seriously way too much emphasis on if you were wearing a hat or not. And I still don’t understand why there isn’t a New Year’s Tiara like I actually wear in real life.

I checked in a few times for various dialogue and you can see more of it in my video of it, but I decided to focus on more of the end stuff screenshot-wise.

I have a tradition with my family which means I never really get to watch the countdown as it’s impossible for me to both record it and be with them. I like having the recording though. I feel bad I wasn’t able to count down along with the light stick though. 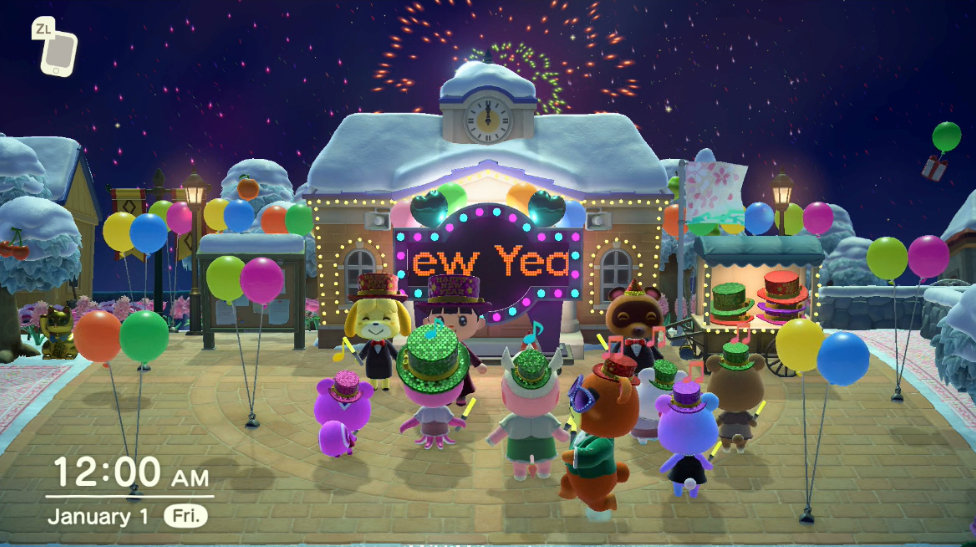 I then went around to talk to all my villagers. Repeated dialogue was excluded from below, but you can still check everything out in my recording. 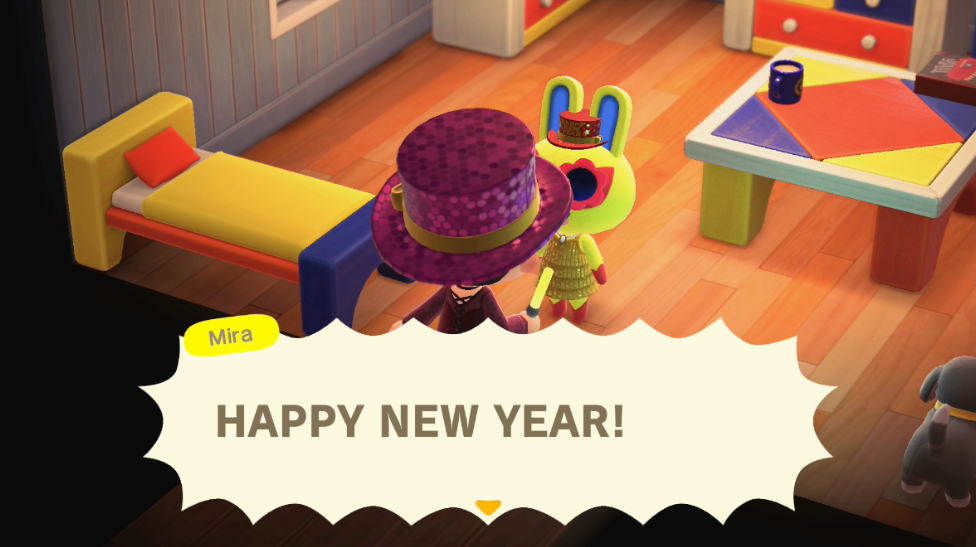 I also got to stop by Meg’s town for her island’s New Year’s Eve celebration as she’s 5 hours ahead of me! It was fun partying with all the Sheep. 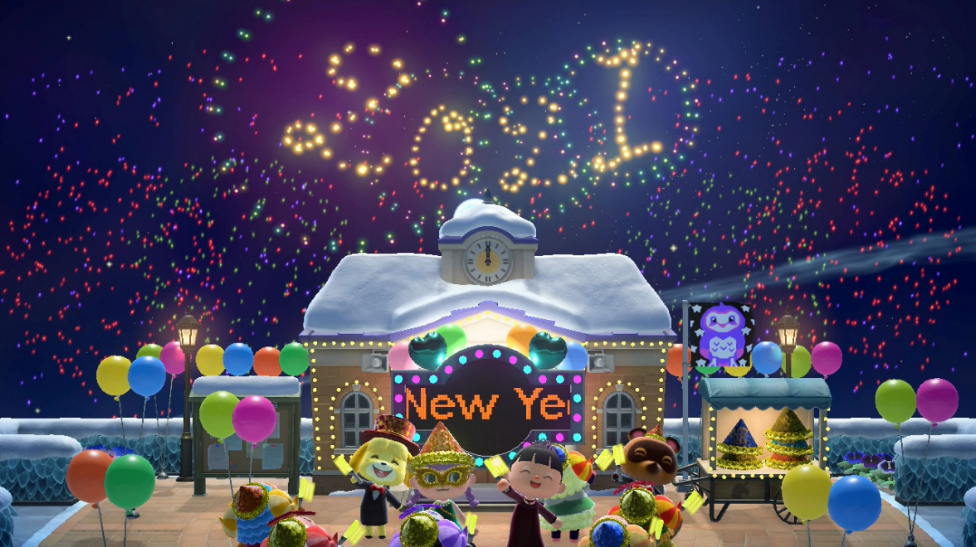 I was surprised to get the Nook Miles stamp from it though considering you can’t earn K.K. Slider ones from friends’ islands. Regardless, it was a lot of fun and I at least got to count down a little then!

Anyway, here’s hoping 2021 to be a lot better. I’ll edit this later when it’s hit 5AM and I’ve managed to get some of the new Nook Shopping items ^-^

Meg sent me over two of the items– the Olivier Salad and the 2021 Balloon Arch. Am I the only one sad that the original recipe for the Olivier salad is essentially lost to time? I don’t know, I just find that kind of heartbreaking. As for the Balloon Arch, it’s cute but I have no idea where I’d use it. 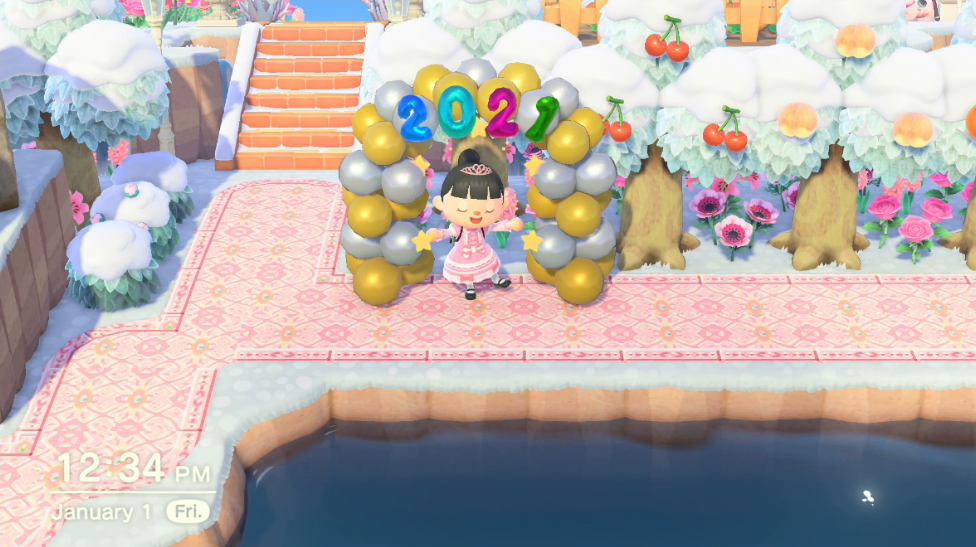 I had a few new New Years greetings from villagers, but nothing too different from last night. I did, however, get an extended one from Isabelle: 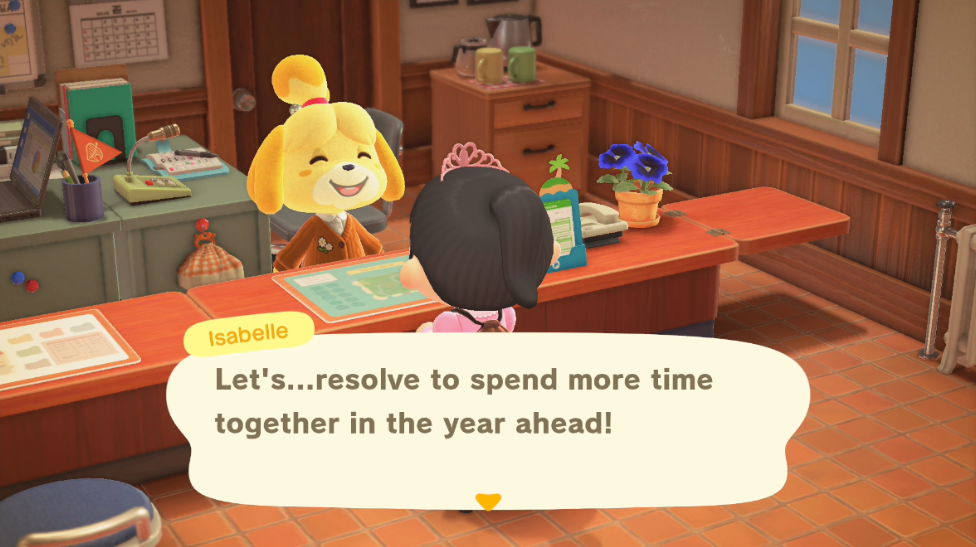 Even though Isabelle will often have something said for certain holidays/special days, I’ve noticed Tom Nook never does which I find odd? He’s not heartless and he was definitely celebrating last night so I have no idea why he doesn’t get any special dialogue as well.

Even the Nook Stop had extended special dialogue:

With help from my husband, I did get three more of the new seasonal items today and they were ones I had an idea of where to put them…

I did update my Dream Suite so feel free to visit “in person” as well :) The last two items (and a few extras) should arrive tomorrow.