Can you tell what part I was most excited for? Before we get to the update that happened today though, I do want to talk about some stuff I’ve been doing until now!

First, let’s head back to Day 293 where I actually had my very first Aurora!

It took a while to show up, but it was really pretty.

I also got a new letter from Mom featuring Mom’s Art which is probably one of my favorite items. All the paintings are so pretty.

The 3rd was the Fishing Tourney, but having already gotten all the items and the stamp from a friend’s Southern Hemisphere town, I decided not to participate. The very next day though was Diana’s birthday!

The Pink Camellias also started blooming and are honestly probably my favorite bush this time around. It’s too bad they aren’t around during Cherry Blossom season. 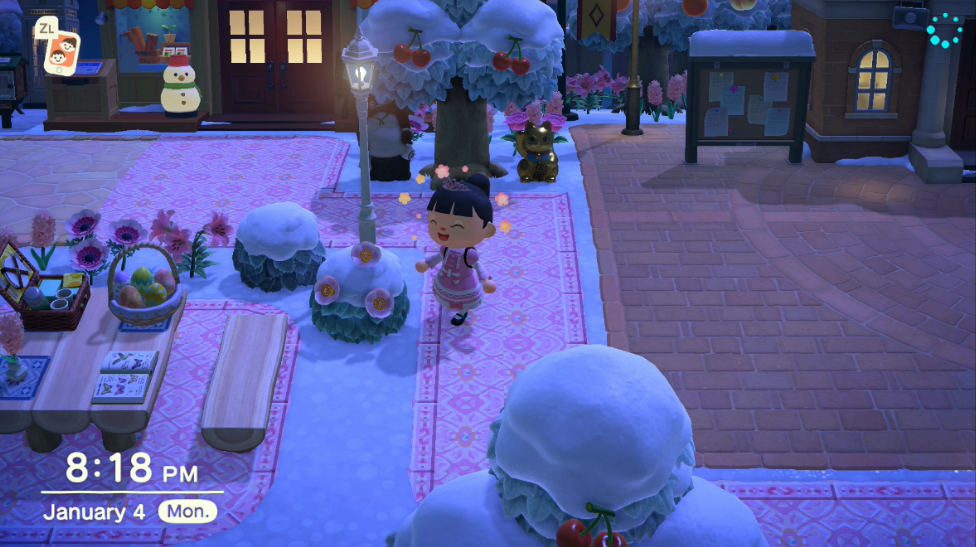 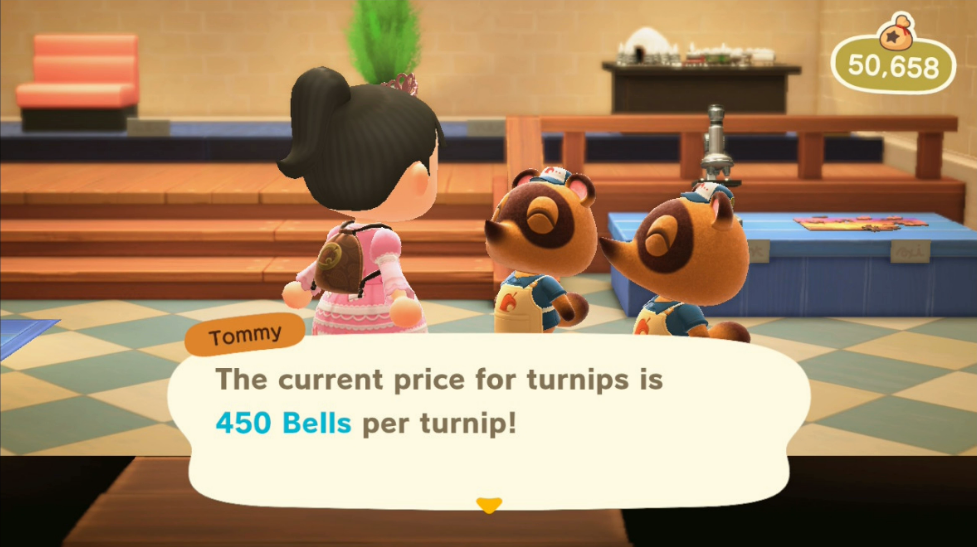 And gave myself a new project of giving my villagers aesthetic-related tools for them to use instead. 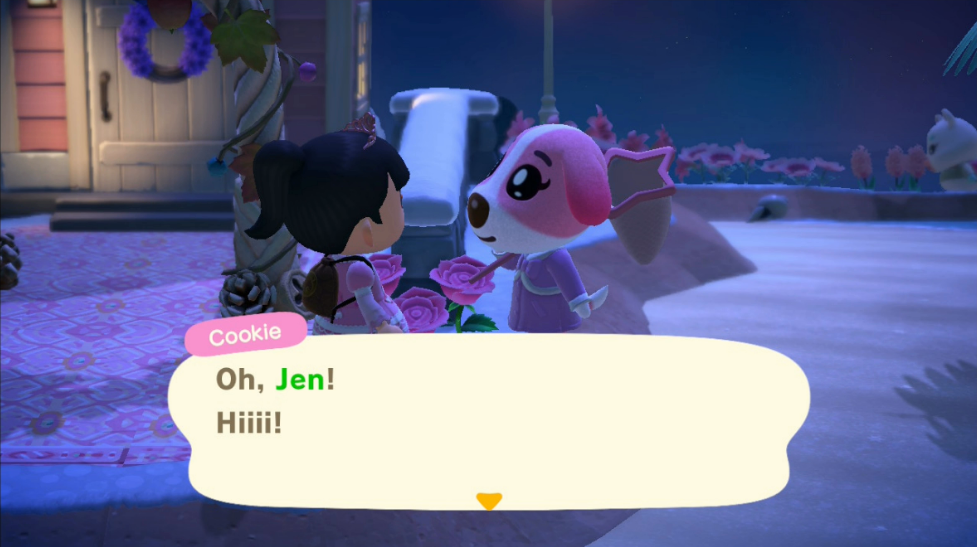 I do like how Villagers can change some of their items based off what you give like their Winter/Snowing wear as an example.

Meanwhile, I finally found Wisp again after not seeing him for ages. Considering where he spawned, I can kind of see why. I only have to help him one more time to finish up the Nook Mile now though at least. 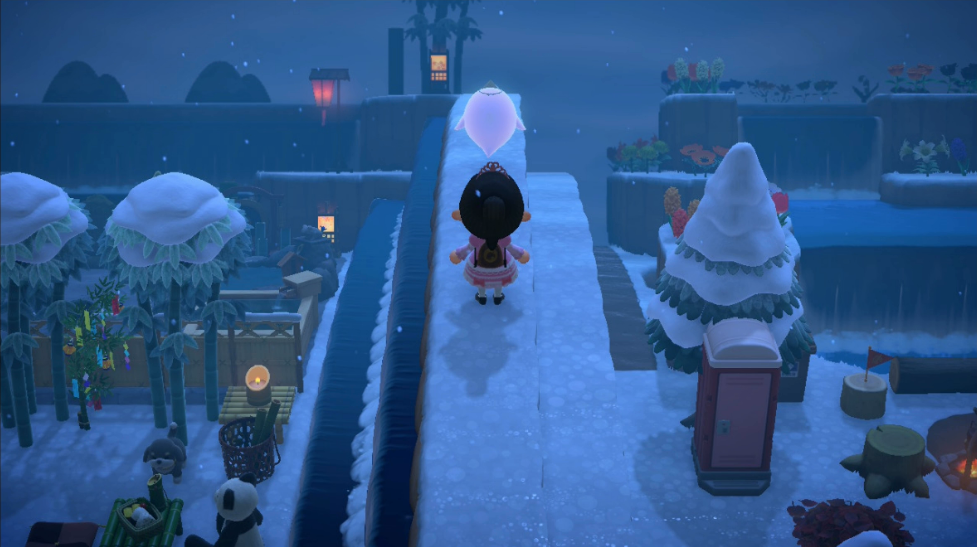 Valentine’s Day stationery also showed up and I love it so much. It’s so pretty.

I also ended up doing something with a simple panel enough to set up a “door” for the area with the “backyard” so to speak in the house. I had hoped the door options from Happy Home Designer would come over and while a part of me still hopes, I’ve mostly given up on that point. 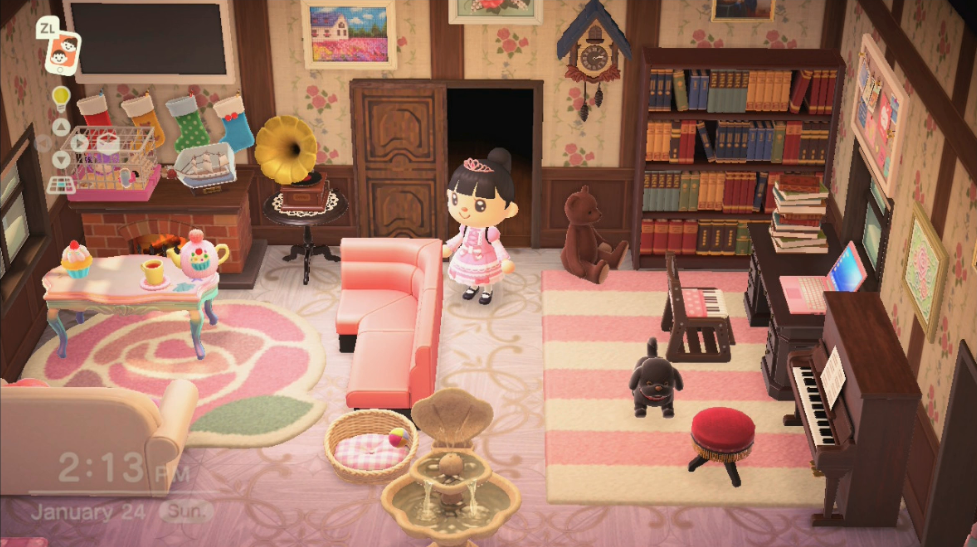 In general, updates just feel so stretched out and so often it’s content that we’ve had in some form from previous main games already. And while adding some new DIYs to existing things to be nice, honestly, I like relaxing and being fully done with something. The idea of having to get back to that same season or event or specific thing just in hopes to get the one new DIY added isn’t that fun to me.

Finally, we’re here on update day!! For one, the Maracas are super cute.

I don’t know how much I’ll use them, but I still adore them.

At this point, I thought there may not be anything else to do right now. I ordered the new seasonal items (Beans, a Megaphone (I got the Starry one today), Football Rug, and the Resetti Model), but Maintenance was still ongoing for online connections so I still couldn’t gift things to friends or get anything.

But then I found out the Mermaid Fence was finally properly in the game. And I immediately went to find a scallop for Pascal and pray for a Mermaid fence. Much to my delight, after several minutes or so of searching, I not only found my scallop, but did indeed get the fence I’ve been longing for!

I immediately set out using all of my Coral and Sand Dollars making as many as I could.

Thanks to Leo, Noxness, and my husband, I managed to get enough for all the fences I needed (and I’ll take more photos of that during the day and probably edit them in tomorrow), but my Coral and Sand Dollars are completely drained.

Despite the paranoia of lack of materials, I’m so happy about the fences. I’ve felt really unhappy with my island/town and paths and everything felt wrong, but despite being such a small thing and me even keeping other fences in certain areas, finally having the Mermaid fences really felt like things were actually coming together. I hope that means when Cherry blossom season hits, it’ll really set the tone and aesthetic I’ve been hoping for.

And with maintenance over, I received some of the Nook Shopping Seasonals from Zed and my husband!

Using the Megaphone is honestly a little scary, but they’re still cute. I also kind of want to find somewhere for the Resetti model, but I don’t really have any ideas yet.

As for the beans, I’m a bit disappointed they don’t really bounce anymore like they did in New Leaf. They also don’t seem to cause birds to show up like what could happen at the campground in New Leaf (I even tried going to Harvey’s Island, but you can’t equip anything there v__v;) so that was also pretty upsetting. Maybe it’ll work during the day or it’s just not a thing this time…

They’re still cute though and I decided to put some beans at the end of the dock. I don’t know, I guess I thought it looked cute or like the idea of little pellets for the fish or birds or something… 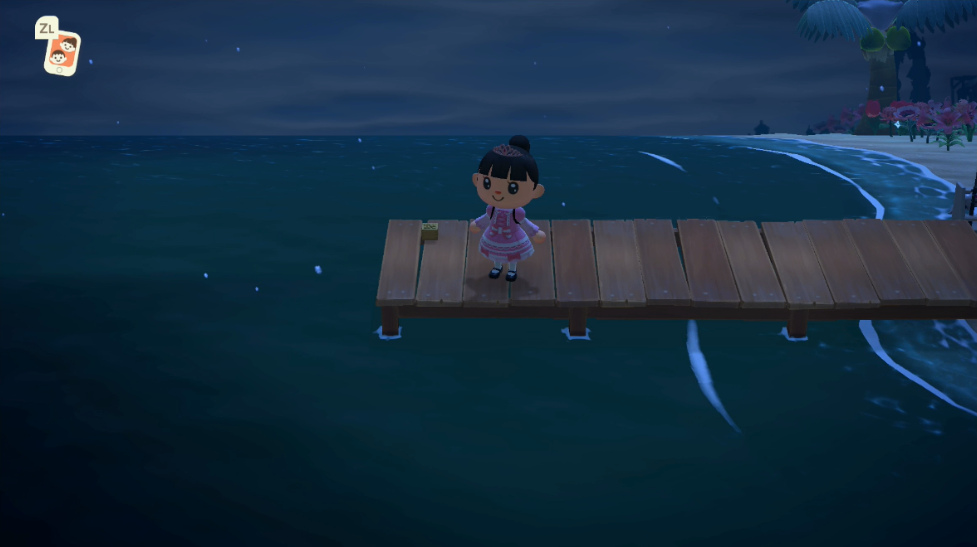 Anyway, that finishes up today’s entry! Next entry will likely be mid-February with Festivale, new seasonal items, and Flurry’s birthday (which is on the 30th of this month). Also be sure to keep an eye on Youtube channel tomorrow as I’ll be uploading me checking out things with the new update hitting in a fun video along with getting all my fences done in a second video :)

Edit: As promised, some screenshots from Day 328 showing some photos during the day! But first, thanks to friends, I managed to get the other Megaphone colors so now I have all four!

I had been feeling so dissatisfied with my town and just having nicer fences have made me feel a lot better about so many things. I’m even happy with my path again. And I really like my entrance too no! 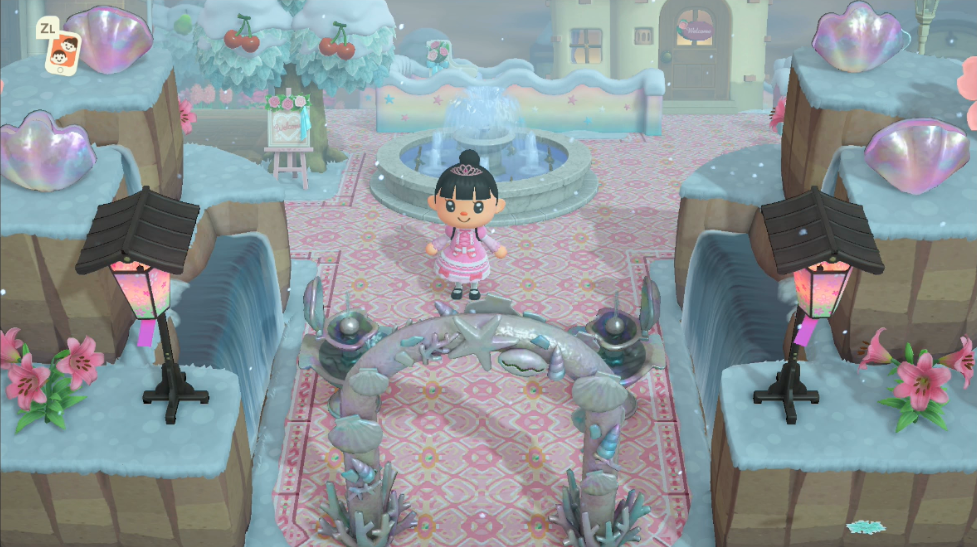 As I worked on the park though, I was reminded of some of the pink sand patterns I’ve seen. I decided against using it on the beach as it can’t actually fully line-up to the areas the water flows on.. But then I thought, why not try using it for the playground? 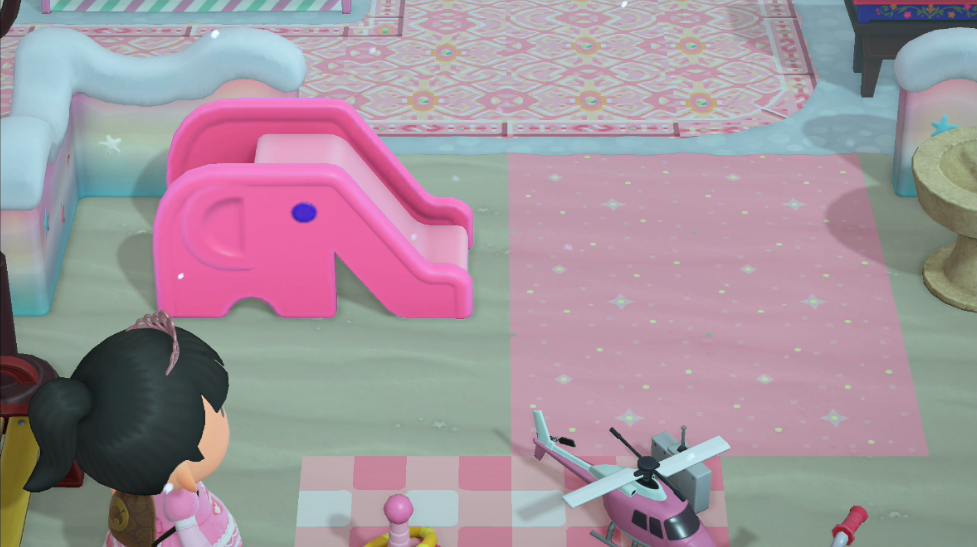 With some encouragement, I gave it a shot and I’m honestly pretty happy with how it came out. Definitely makes me wish I could actually have a pink beach though. 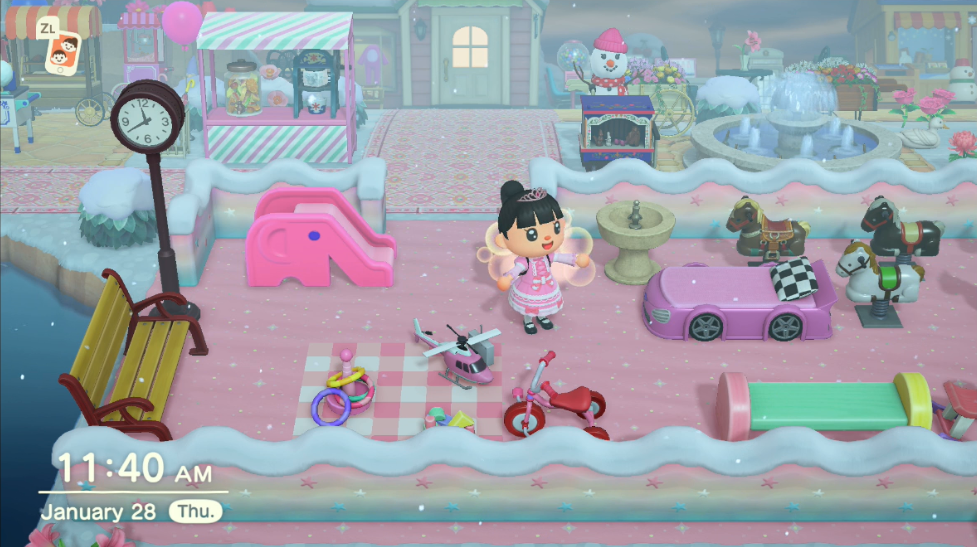 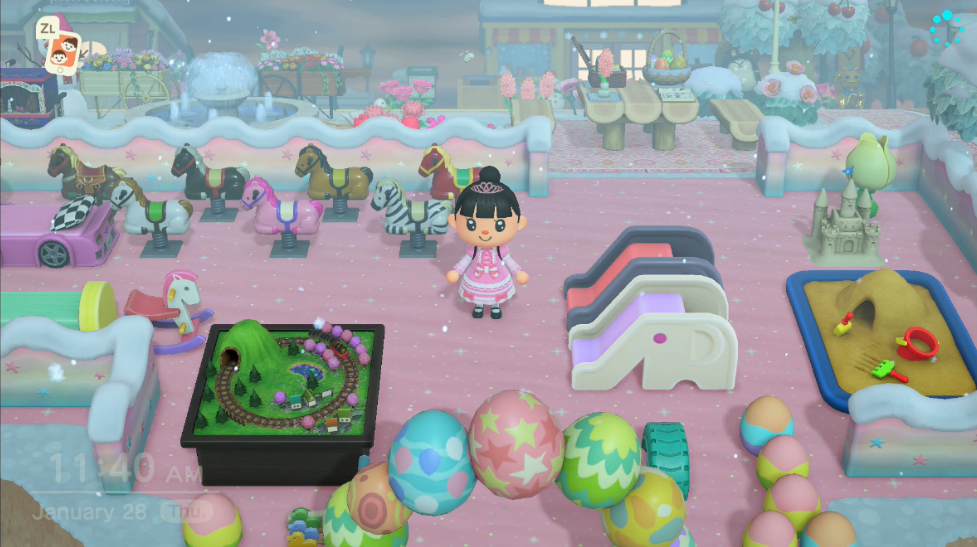