Normally I try to get the posts done same day, and well, I suppose the 18th is the official update date anyway even if it went up the evening of the 17th here, but there was… a lot. Even with the general nervousness over the amount of Sanrio items, especially when people who may be new to the series or never got a chance to get them back in 2016 will still be waiting for over a week to get them, along with the limited amount you can order each day (There’s a total of 80 items if you include the new posters for the Sanrio Villagers so you’re looking at over 2 weeks of ordering just Sanrio stuff to catalog it all at the least), Isabelle dropped a HUGE amount of news on us including brand new seasonal items, some quality of life updates for Patterns/Designing, and adjustments to Bunny Day.

While I found most of the updates interesting, I’m not thrilled about the Nook Points thing. I don’t really like multiple currencies in games to begin with (and New Horizons already has two not counting the Heart Gems during the Wedding Season event), but just the idea of having to constantly to remember to log in to use the Nintendo Switch Online app is frustrating to me (not to mention people who may not have a cell phone or own an older one that can’t run it).

Regardless, the special update item was a really pretty 1st Anniversary Cake. I wonder if they plan to do these each year or not. 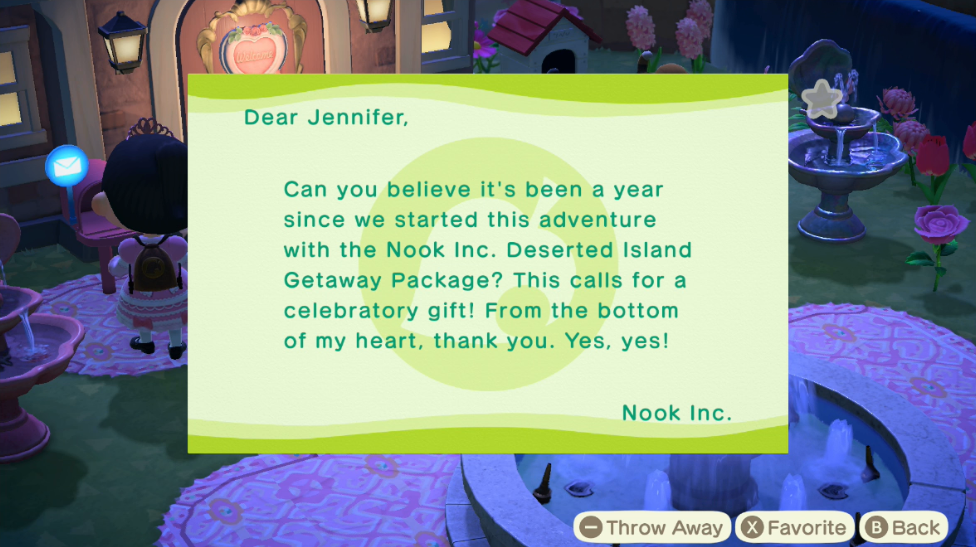 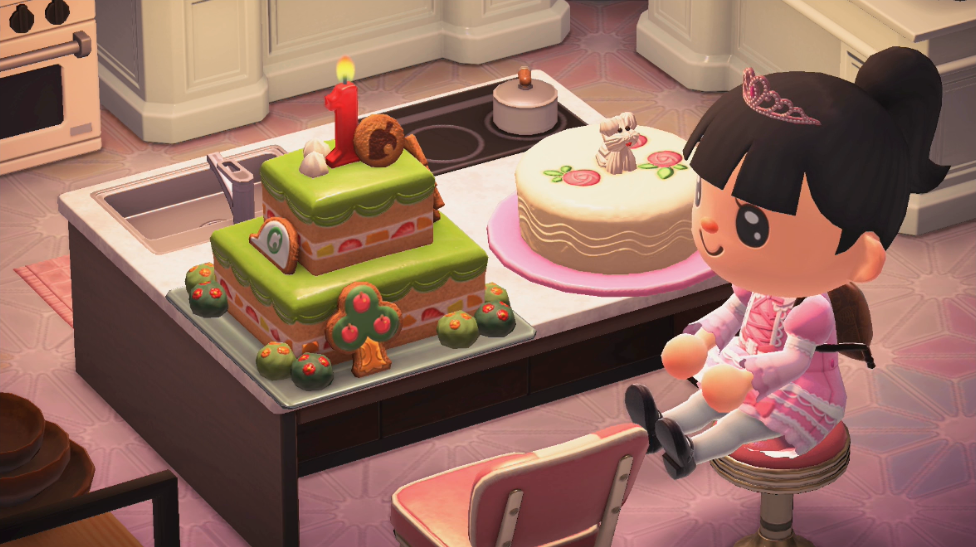 While I was more interested in the Sanrio stuff than the Pattern updates, since it was on the way, I made sure to stop by Resident Services first. 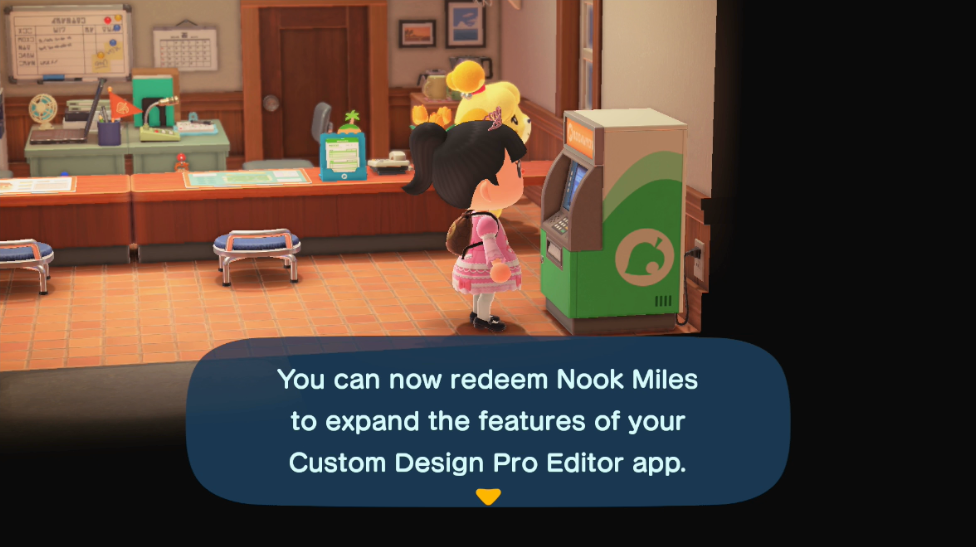 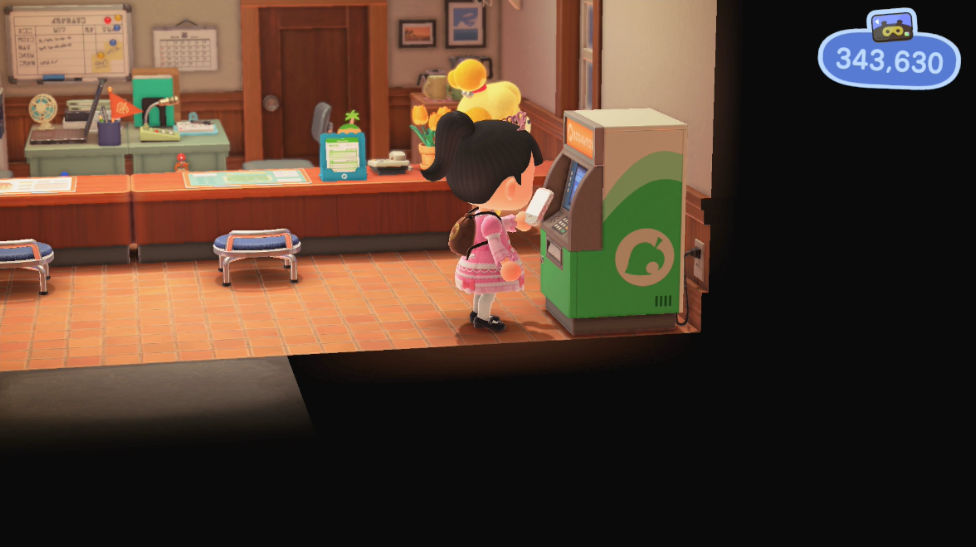 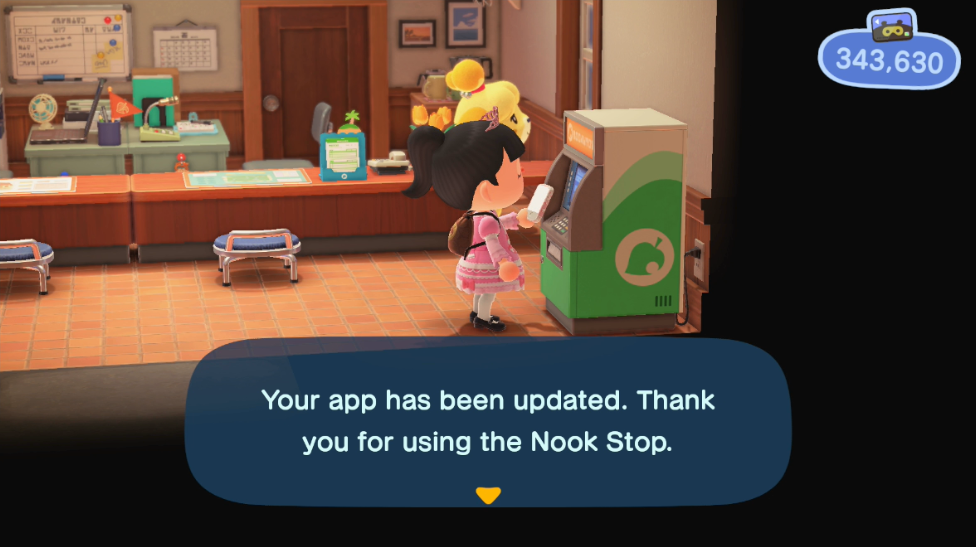 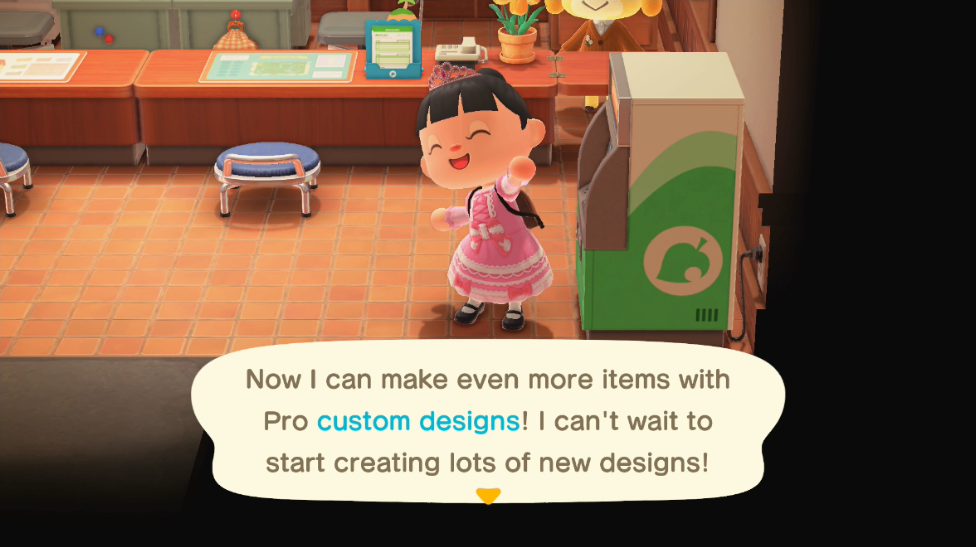 It was then off to Harvey’s to invite the Sanrio characters along! 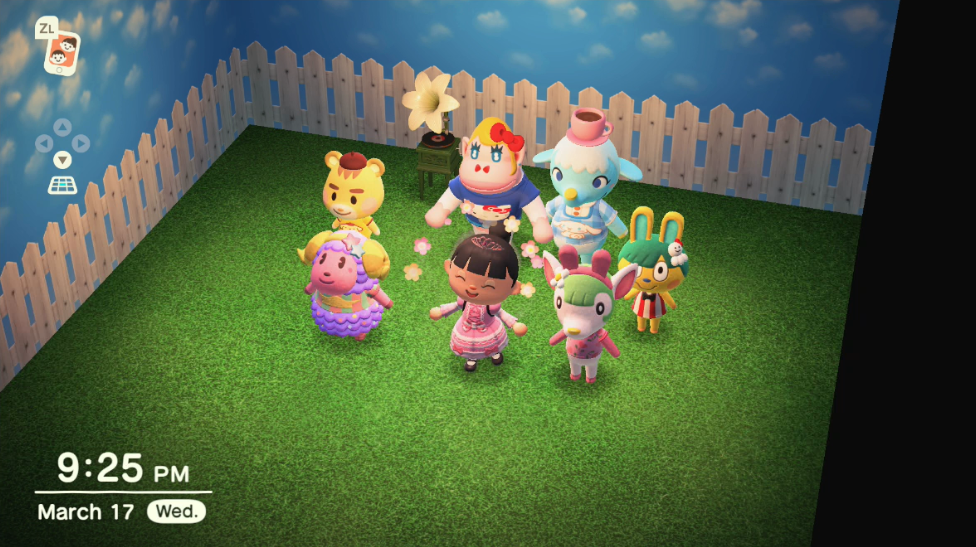 Essentially, the way it works is for each one scanned in, you unlock their respective collaboration items and 2 Posters (A Collaboration Poster and one for the actual Villager– the former was given when you scanned them before they were properly in the game) in the Nook Shopping Special Items section (Posters in the poster section, everything else in Promotional). So if, for example, you only had Rilla for whatever reason, you would only scan in the Hello Kitty items.

Annoyingly, even if you catalog the items, you can’t rebuy them unless you scanned in the Amiibo. You also can’t even get these villagers otherwise– people can’t request them to move in their town. You have to move them in through the campsite yourself. While I can understand them not being randomly around on Nook Miles Islands or being able to just show up randomly as a camper, I find not even letting people help out others is really disheartening.

As it is, with 80 brand new items just from the Sanrio characters, ordering everything for cataloging purposes has been exhausting. Regardless, thanks to friends, I at least managed to get some of the priority ones I really wanted to decorate with. 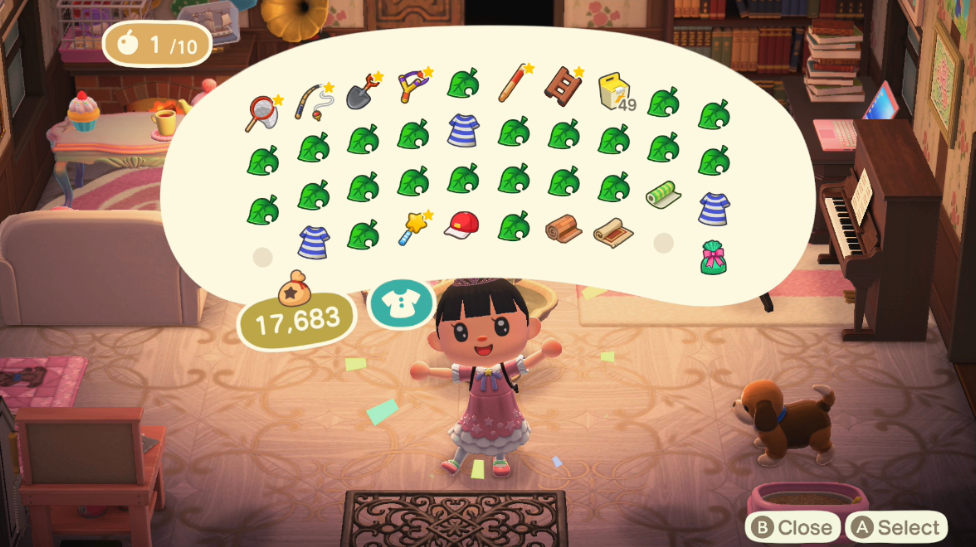 With items in hand, it was time to start redecorating. I started with the Kitchen– it was a hard choice deciding between the Pudding and new Anniversary Cake, but essentially the other would be placed in the cafe.

I would say of the interior adjustments, the only one I’m not 100% satisfied with is the “backyard” area. 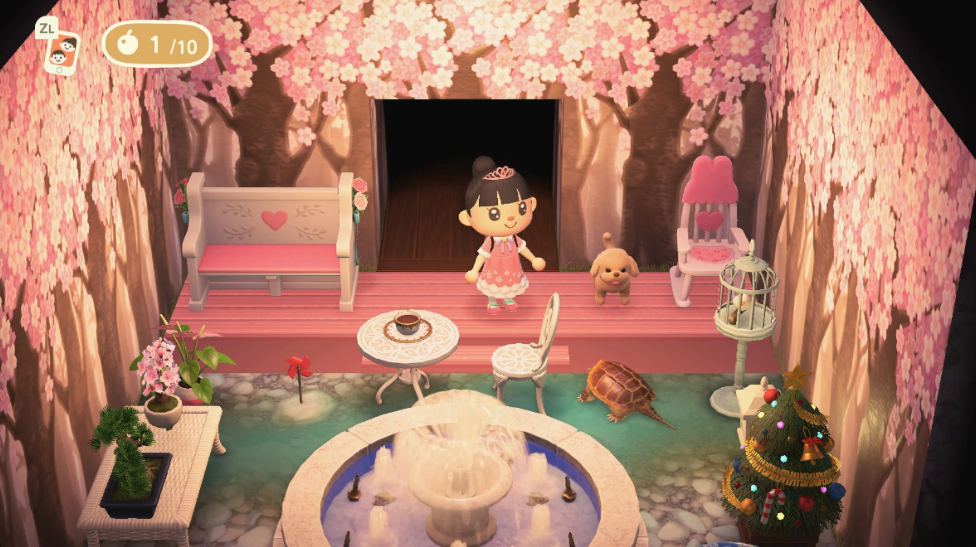 I might switch it back– I haven’t decided yet, but it just frustrates me as if the room was 8×8, I would’ve been able to do what I wanted with no issue and without the weird shifting…

Other changes involved adusting things in the bedroom and basement.

The real highlights though, at least in my opinion, were some of the exterior adjustments. I wasn’t entirely sure how this would come out when I first had the idea with the Kiki & Lala Bed, but it actually came out great and I’m really happy about it. 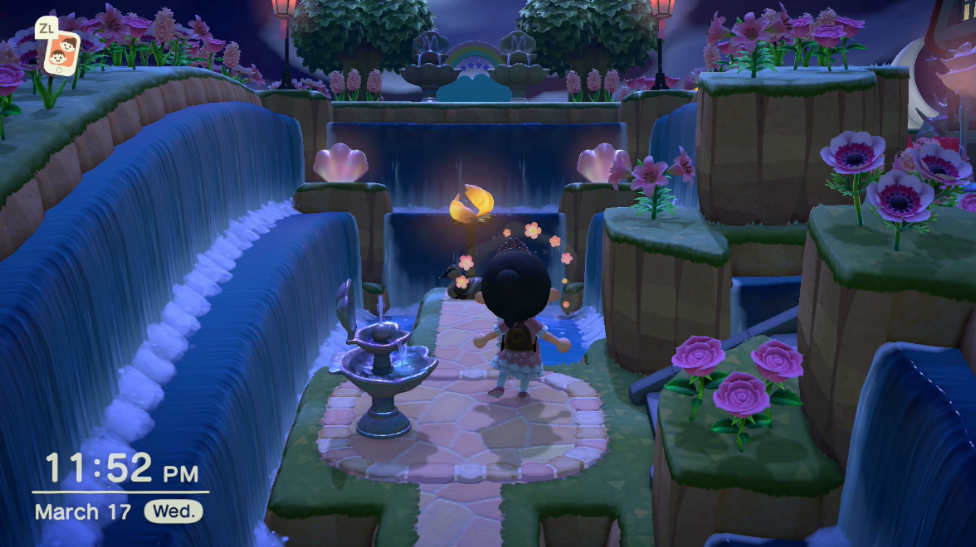 Next up was the Zen area with a couple of the Kerokerokeroppi items. 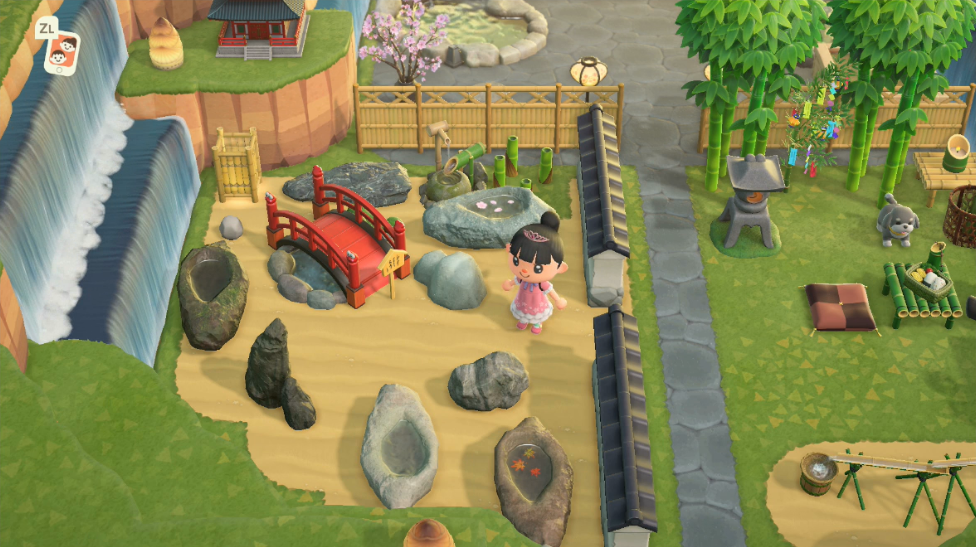 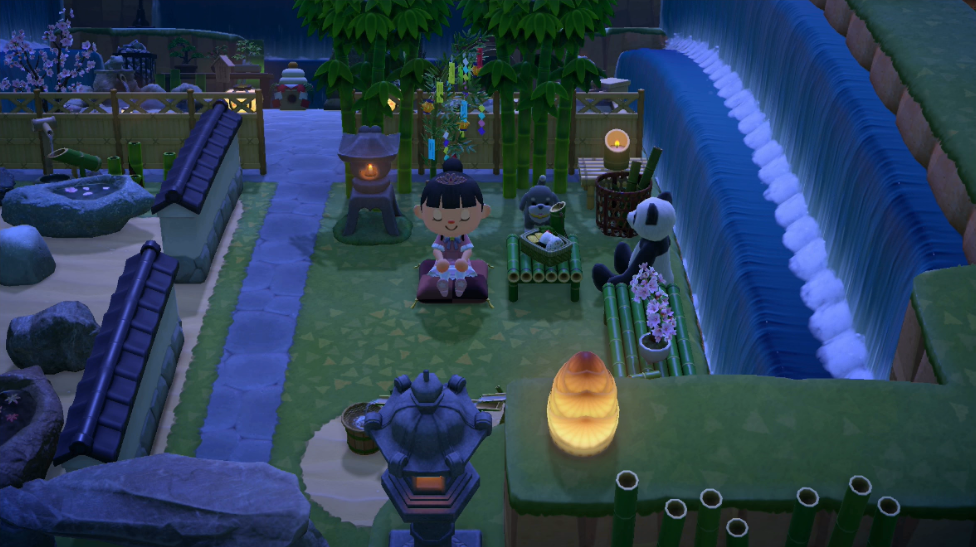 The Cafe then got a small upgrade with some of the Cinnamoroll items. 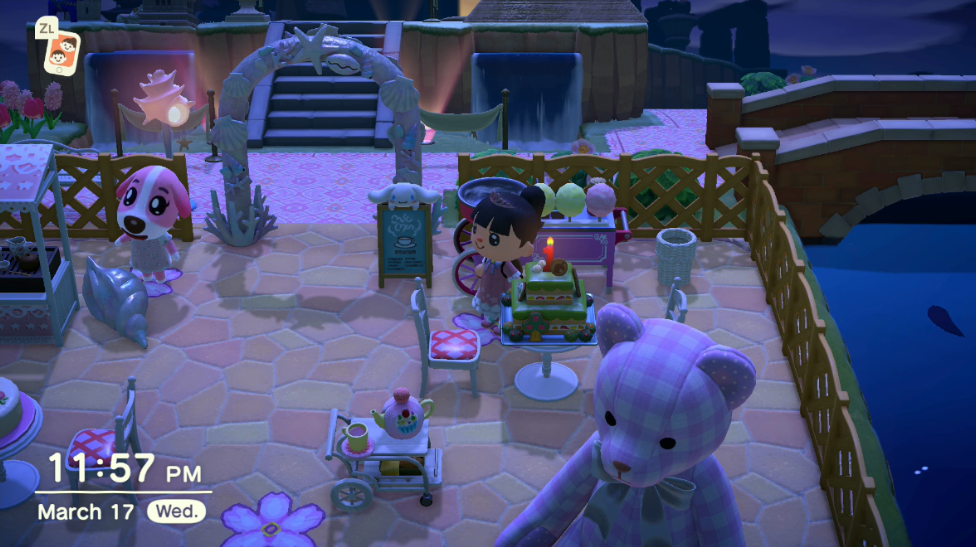 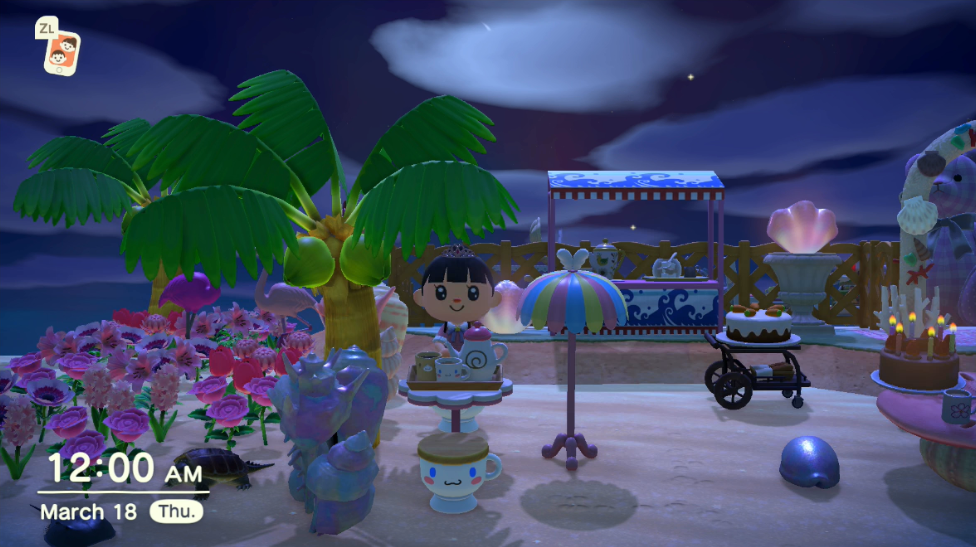 And I also did a couple of adjustments in the market area. I thought the Hello Kitty Topiary would work better here and I decided to finally replace the one egg with a bush because I have a lone egg in the Playground area already anyway. 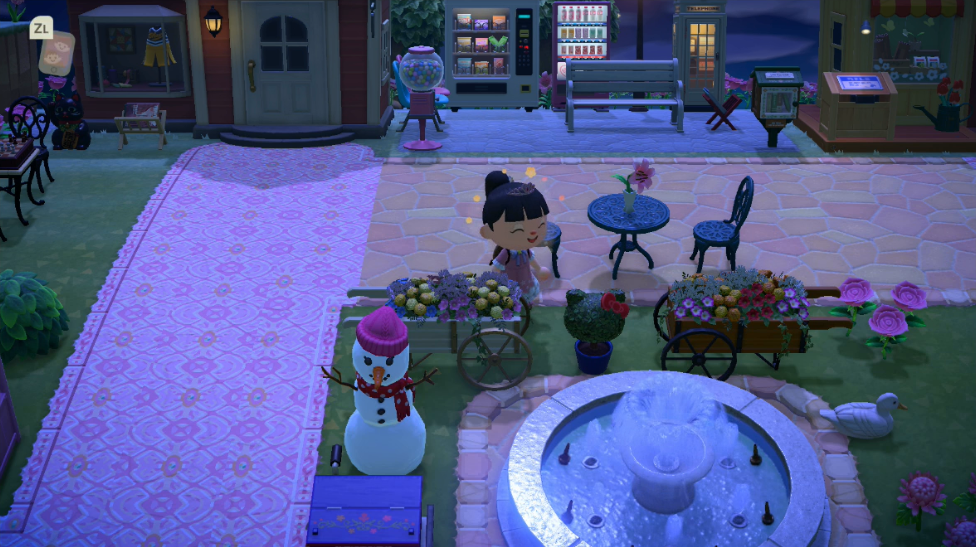 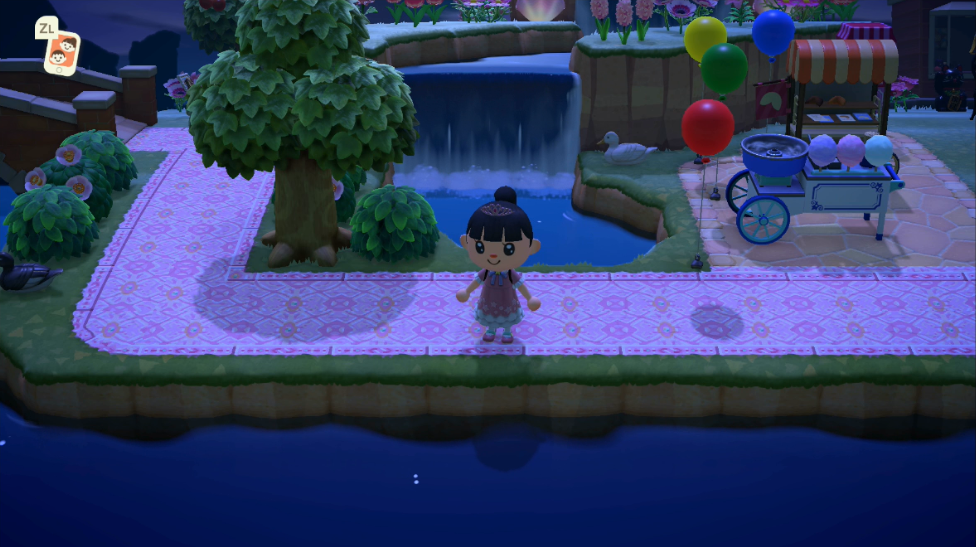 One thing I was especially happy about was finding a nice place for the Cloud Machine in the end. It ended up being smaller than I though and it was something I really wanted to use. 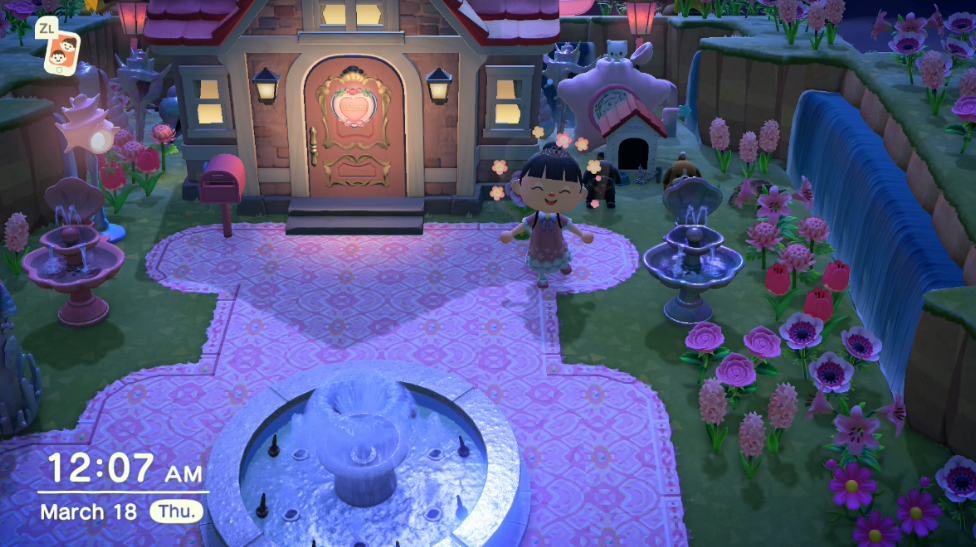 You may also have noticed my outfit is a bit different in these! I couldn’t help but wear the Kiki & Lala Dress + Shoes for a wile. It doesn’t really beat out the Lace-up dress for me (Though, how can you beat out a dress with both puffed shoulders AND bell sleeves??), but I really love the colors. 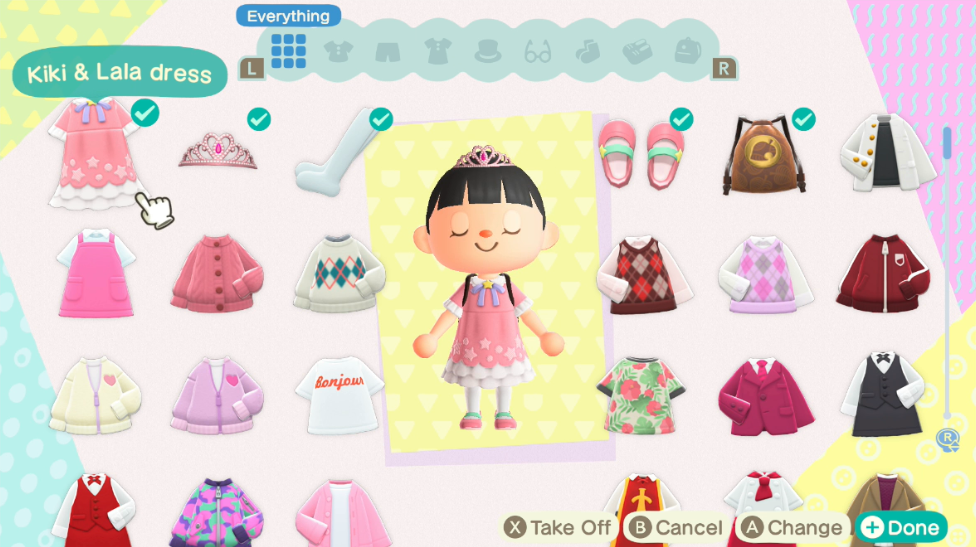 I then moved onto some pattern-related changes, now that we have 50 new patterns, the main thing I could do was work on certain other pathing things I wanted to do along with cleaning up borders. Near my house, I added a splash of color and some borders to the Waterfall Shrine area while also adding some borders to the planter section by the terrace. 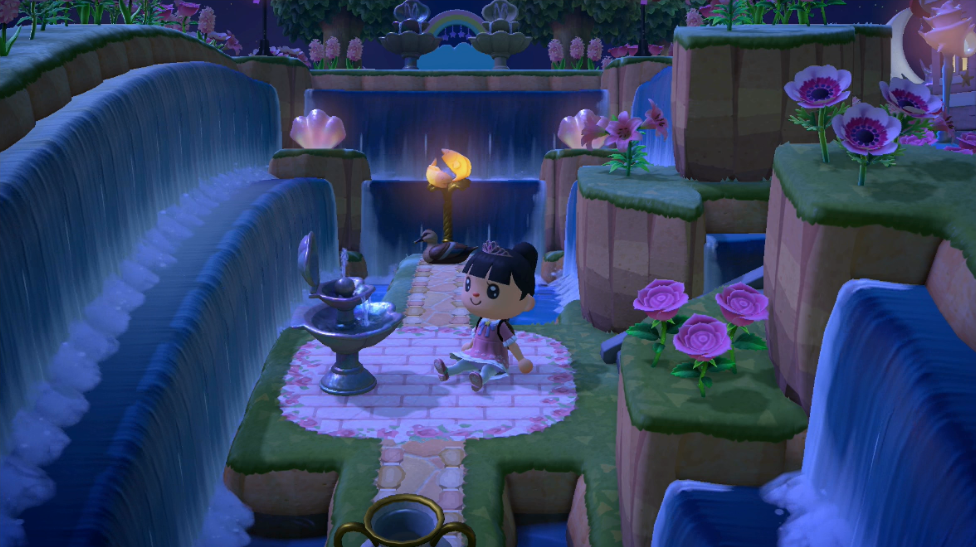 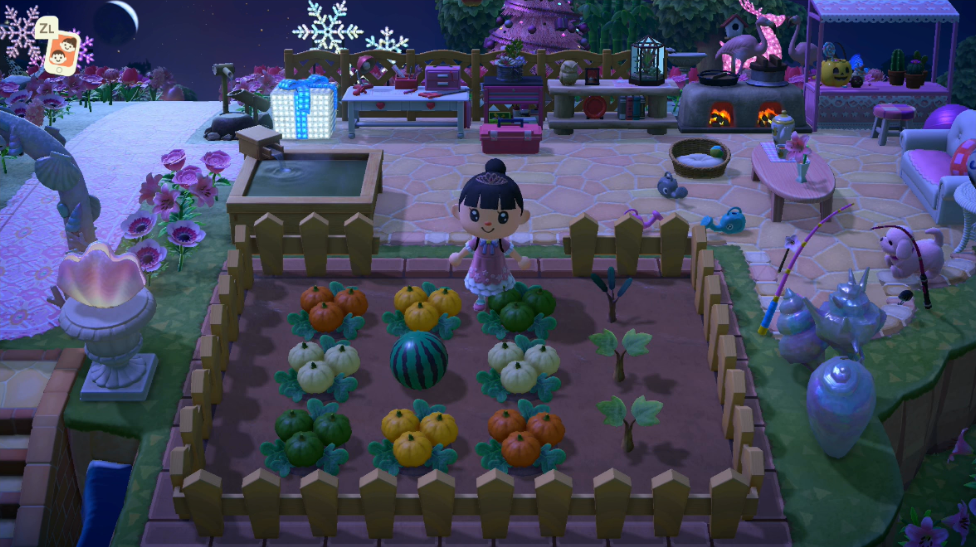 The Cafe got the biggest makeover with all new patterns. If it was possible to edit patterns or multi-layer them, I think it’d have been cute to add some cherry blossoms in, but I do think it looks really cute as is already too. 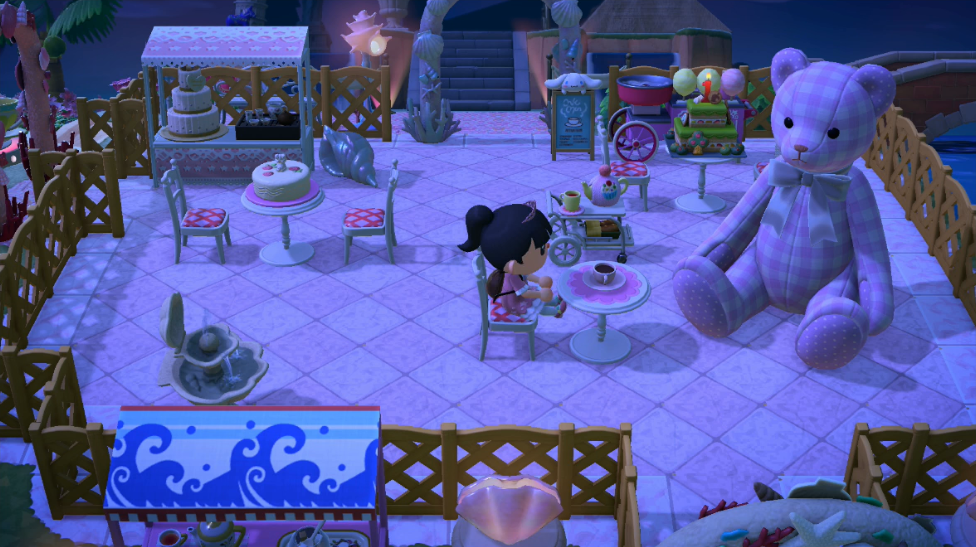 The final, and relatively smaller, exterior changes were at the Museum and Secret Beach. While I didn’t think the Stone borders looked great everywhere, I felt they were perfect for the Museum… And I couldn’t help but fill in the last space by the Secret Shore. 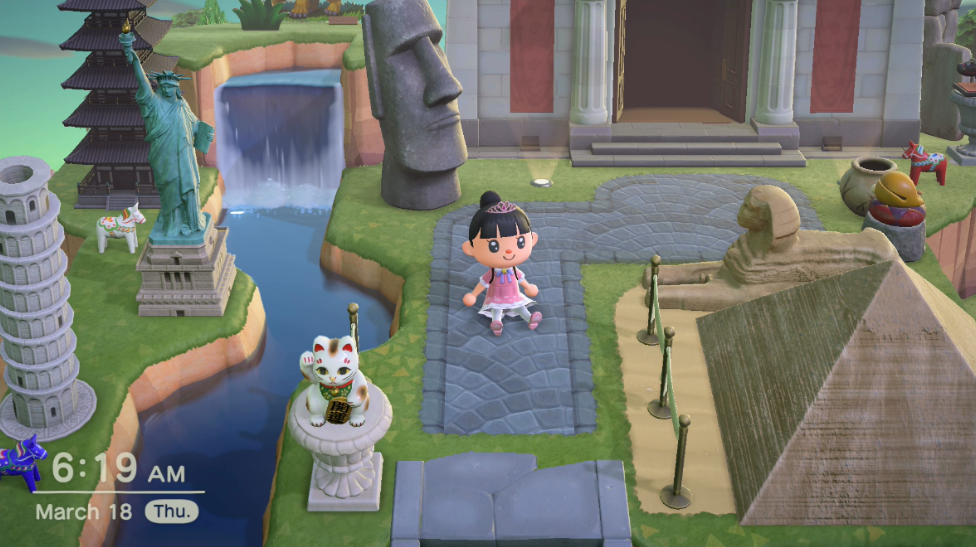 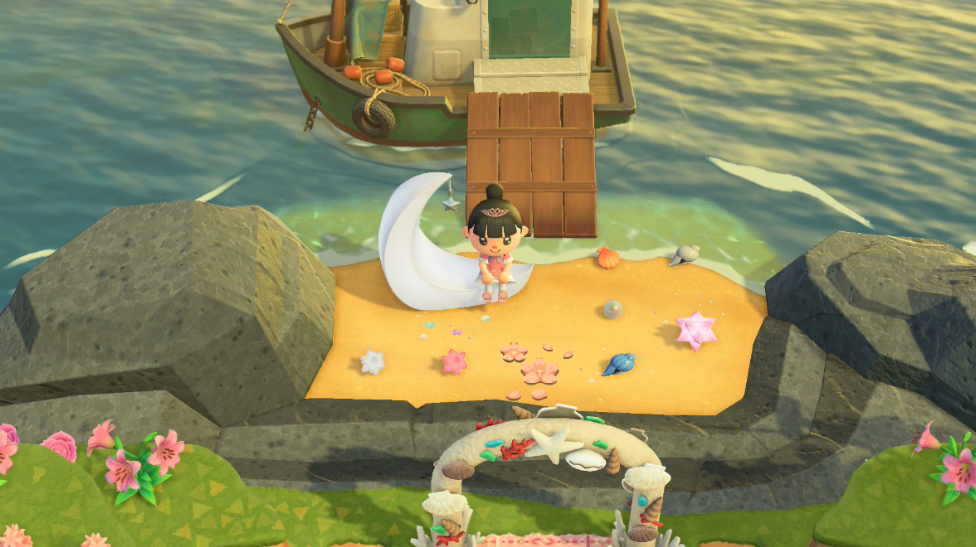 This is probably the most I played New Horizons in at least several months– even picking it up again very quickly after putting it down. But I’m not sure how much was me enjoying playing vs. me stressing out trying to keep track of everything. It didn’t help when I had the endless saving bug and had to close out of my game which was incredibly nerve-wracking. Thankfully, everything was fine.

Finally, to touch upon a few other negative aspects, I just kind of want to go back to the time locking debacle. And I feel it’s important to mention this is from someone who doesn’t even time travel, but the whole situation just encourages hacking and also makes people feel behind/locked out among other issues (like people getting items from friends and not realizing they shouldn’t have them yet and then having their Dream Suite reported and just, there’s so many layers due to this stupid slow update system and gating things).

I am really excited for the new Bunny Day items most of all, surprisingly. I think they are all really cute and might even use two of certain items… I just hope we can buy as many as we want each day as there’s 5 new items, but only 8 days of the Event this year… Along with removing access to the event last year. I’m guessing that’s partially due to the change in length causing issues but why not just… have it end sooner? Why have it so it’s gone altogether? I just feels really strange to me. :/ And also kind of worrisome for what could happen for other events in the future.

Most of the new Prom items (essentially anything you can get at Able Sisters) are apparently already available and a friend was kind enough to let me catalog them to have one less thing to worry about. I think my favorite items are the accessories, honestly. The Sash isn’t available yet, but still looks nice, and I think the shoes, masks, crowns, and tiaras are all really cute.

I’m fairly disappointed with the dresses though, to say the least. I like the bubble one and the necklace on the slip one… The problem is that for some reason, sleeves are just a foreign concept I guess. At this point, nearly every new dress that has come out through an event (exceptions are one Halloween dress and the one Easter dress) have been sleeveless and just… if you were making three dresses anyway, why couldn’t at least one have sleeves?? While in New Leaf my issue was the lack of color variations, my issue in New Horizons is the amount of cute dresses that lack sleeves.

Regardless, I am looking forward to the Forsythia and Cool Globe as well, plus some of the Nook Point items (or at least, what I assume will be Nook Point items) seem neat even if I had the entire system.

For now though, it’s back to slowly ordering items to catalog… So many items…