Despite multiple tests, it seems the illustration isn’t guaranteed despite playing through multiple times with only the LoM seeming to have any effect. I’ve added notes to all the neutral answers taken to get some, but no actual pattern has been found for sure.

Action Points used: 900-1,000AP
Illustrations: 2. 65-75+ LoM apparently (Crush is required to reach over 70 LoM, but not sure if it’s required to begin with), some specific default choices, and pick the illustration path you want It is not possible to get both in the same playthrough. 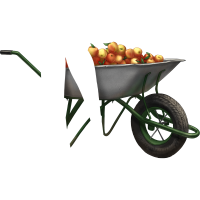 You can find Auntie in the Pasture after Apple Picking with Lysander.

The episode kicks off with Candy waking up either in Lysander’s room or the guest room. Lysander is already up so Candy heads down to the living room where she runs into Rosa the Rabbit. You can find Lysander in the Kitchen. Lysander will then offer to give Candy a tour of the farm.

Lysander: I can give you a tour of the house after, if you want!

Regardless of which you pick, you’ll get some kind of tour. Lysander starts with telling you stuff about the Kitchen. After the Kitchen, head to the living room.

Lysander: I’ll admit, I miss it a bit. I don’t play anymore.

Lysander: I’m not sure there’s a moral to this story, but I find it amusing.

• I prefer the stories that take place around the table. /
• I think I preferred the kitchen stories… -5
• I love listening to you tell your stories. +5

Alas, it is time for farm work. Lysander asks if Candy wants to help and she agrees and heads to the bedroom to change. After some more dialogue, make your way to the Garden.

After more dialogue, head into the Kitchen for Lunch.

Lysander: Generally, for lunch, I just eat something quickly…

• That’s okay. We’ll eat better tonight! -5
• No problem, this is great! I usually don’t eat much at lunch either. /
• Are you kidding me? I’m going to be able to taste your tapenade with bread, I’m thrilled! +5

• We still have to feed the cows, right? /
• Do you think we still have a lot to do? /
• What do we have left to do this afternoon? / <-- No idea if required, but answer picked when illustration was received.

After, make your way to the Pastures (they are available through the Garden which you can get to through the Kitchen or Farm Entrance).

Lysander: Well, there isn’t a particular technique… When you see an apple, you take it and put it in the bag.

• Should I pick them even if they’re a bit bruised or have holes? /
• I should be able to do that! / <-- No idea if required, but answer picked when illustration was received.
• All of this? It’s going to take us days! /

After this, you can find Auntie. If you want to get her gift, before heading back to the Kitchen, go back and forth between the Garden and the Pasture until Auntie shows up in the Pasture.

Once in the Kitchen, you’ll have more dialogue with Lysander.

Lysander: So, what do you think about life on the farm, after your first day?

• I found that quite nice. Exotic, in any case, it wasn’t unpleasant. /
• I really liked it! I feel… really good, here. +5
• I… Let’s just say it’s not really my natural environment.

Candy wants to take a shower so head up to the bedroom. After her shower and buying the outfit, you’ll get another choice.

He’ll open the door to the Office where he does his writing.

Lysander: Are you hungry? I’ll make us something to eat.

If you picked the option to hear more, after various more dialogue where Lysander shares his writing, if you have high enough LoM, you get an illustration plus more dialogue. Despite the different locations, the dialogue does quickly link back up.

If you picked the option to go help with dinner, you head down to the Kitchen immediately and talk about what to make.

Lysander: Is that a problem? Do you want me to buy some for you tomorrow?

• No. Maybe I should think about that, too. /
• In fact, I haven’t eaten it for a few months either. /
• I think I’ll be able to do without it for a week, that’s fine. / <-- No idea if required, but answer picked when illustration was received.

Lysander tells Candy to wait in the living room for him to set up a surprise in the garden so make you way to the living room. After some dialogue of Candy thinking to herself, head to the Garden. After more dialogue, you should get an illustration if your LoM is high enough.

Regardless of which you pick, you’ll still get these dialogue choices either in the Office or Outside in the Garden based off which option you picked.

Lysander: Obviously, I write a lot more than Castiel can sing, but at least those that correspond to him travel a little.

• You don’t have to sing them, you can make a collection of poetry out of them. /
• You don’t need anyone to sing the others, do you? /
• Castiel didn’t offer you to continue with him? /

After more dialogue, if you’re in the Office, you’ll head down to the Kitchen to eat and then head to the living room. If you’re outside, you will continue to have this next dialogue choice before heading inside to go to bed.

Lysander: The last time we talked about it on the phone, you weren’t very sure…

Regardless of if you had decided to sleep in the guest room, you’ll end up in bed with Lysander at the end because Candy agrees to it and you have no choice otherwise.