It is officially the last day of E3! It’s been a very eventful week so honestly, as fun as it’s been, I’m also looking forward to when things calm down too.

While Nintendo tends to get the loudest fans, I’ve always found the best way for me to go into it is to expect nothing and be pleasantly surprised instead.

Despite that, while I have no specific hopes, there are some things I will be very surprised if they’re not mentioned:

I would also think we could see a bit more of Splatoon 3 and/or something Pokemon related, but I guess we’ll see. For now, that’s about the only predictions I have…

If I had to pick hopes, obviously, it’d be certain things with Animal Crossing– Quality of life stuff, Amiibo Cards for the 8 new villagers, not having “hidden” catalog items, changing how Seasonal items show up, BIGGER ROOMS, being able to increase our island-size, etc., but honestly, I just haven’t really liked how updates worked and despite them doing it this way to increase playtime, it actually had the opposite effect on me.

Regardless, let’s get on with the show and my actual thoughts as it goes! I’ll skip any games we’ve seen before though unless I really have something new to say.

So, as expected, new Smash Fighter announcement and right at the start too. There’s no character I really want in Smash and with the removal of trophies, it killed a lot of my hype for it, but the trailers can still be interesting to watch at least. There are better Tekken characters though.

Kirby continues to be the best. I’m really glad Kirby was okay T~T

Didn’t expect a new Worms game! It looks fun though at least.

Super Monkey Ball is one of those games I absolutely adore, but am incredibly bad at (I need a no timer mode). I really love Marble Madness games, but it’s always impressive to watch people who are really good at them too.

PEACH’S BIRTHDAY CAKE LOOKS SO BEAUTIFUL! And excited to hear it’s the best of Boards in addition to the games! And you can play online?? I feel like this is the Mario Party everyone has wanted. Definitely getting Mario Party Superstars. 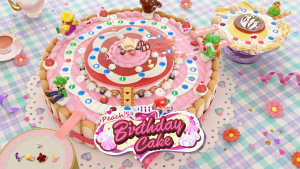 I am intrigued that it looked like they were riding a Unicorn at one point?? I have a lot of fond memories of the Cruis’n series from Arcades so I am somewhat interested in Cruis’n Blast.

I still can’t decide how I feel about Mario Golf Super Rush. I almost want it just to play my Mii again in a story mode. But I am not particularly great at golf games and I feel like I’d eventually just get stuck…

Japan’s Nintendo Direct showed a game called “Worth Life” that looked cute, but I’m not sure if we’ll see it over here.

Wario Ware is always pretty fun so excited for a new Wario Ware game too.

Tempted to just get Danganronpa S so I can pretend everyone is fine and nobody died. Too many good characters you get attached to T~T

Excited to see the DLC for the second Hyrule Warriors game, but I will still be very surprised if we don’t see SOMETHING for BotW 2.

And in the end, we really finally got something!! I’m glad it’s still been being worked on. The trailer has given me so many questions already. I am curious if we will see the initial four heroes too or if this still takes place in the original BotW continuity.

I am surprised there wasn’t an AC thing though, but I feel like we should get some news by the end of the month or maybe sometime next month.

Regardless, it’s time for the Nintendo Treehouse! Sometimes a few other reveals sneak in, but even if not, it’s still fun to watch the game play.

For the most part, what was shown during the Treehouse just further cemented most of my initial thoughts from the reveals, but seeing more of the story mode for Mario Golf Super Rush taunts me so.

Regardless, I’ll probably keep an eye on their Youtube for things that didn’t make it into the main broadcast. I’m still surprised how much longer it went.

I’m still not entirely sure how I feel about the shorter Dark Picture Anthology series to the longer games, but I’m curious how it’ll all come together.

I’m surprised that was it though…

The Immortal Mayor looked interesting and I loved the art style. Might have to give the demo a try when it’s up tomorrow.

Gamespot / Play For All Showcase

I really liked the character deisgns in Tandem: a tale of shadows. Going to try the demo later and see how I like actually playing it, but I’m intrigued by the story either way.

The trailer music for Brewmaster was really nice.

The Duck in What the Duck is really cute, but I’m not sure it’s my kind of game. It looks fun and silly though.

I’ve actually played Townscaper and it’s really cute. Excited to see it get out of Early Access!

And with that, E3 is officially over! Despite all the complaints, I honestly had a really good time and still got some fun new announcements I’m excited for. Not to mention how much the Wholesome Games Showcase expanded my wish list…

Looking forward to next year :)