After the DJ K.K. Concert, I had unlocked one special thing back at Resident Services: House Renovations for my Villagers.

While I know a lot of people have used this for full redesigns, my only goal was to make their houses look nice again (or for them to have a proper house in the case of starting villagers) so I mainly just added onto their existing layouts or tried doing a combination of their past game houses and newer ones. The biggest exception was with Judy’s house though as while I kept the layout the same, I changed out the furniture for ones more fitting to her as the Pastel Kiddie set made… no sense for her at all and I feel like it was only used because a fancier set didn’t exist yet.

For exteriors, I mainly did a few color swaps, but many I left the same. Marina’s was one of the biggest changes as her house made no sense to me based on everything else she had.

I decided to go in the order I got the villagers so Teddy, Mira, Merengue, Cookie, Flurry, Judy, Diana, Marina, Maple, and Peanut. 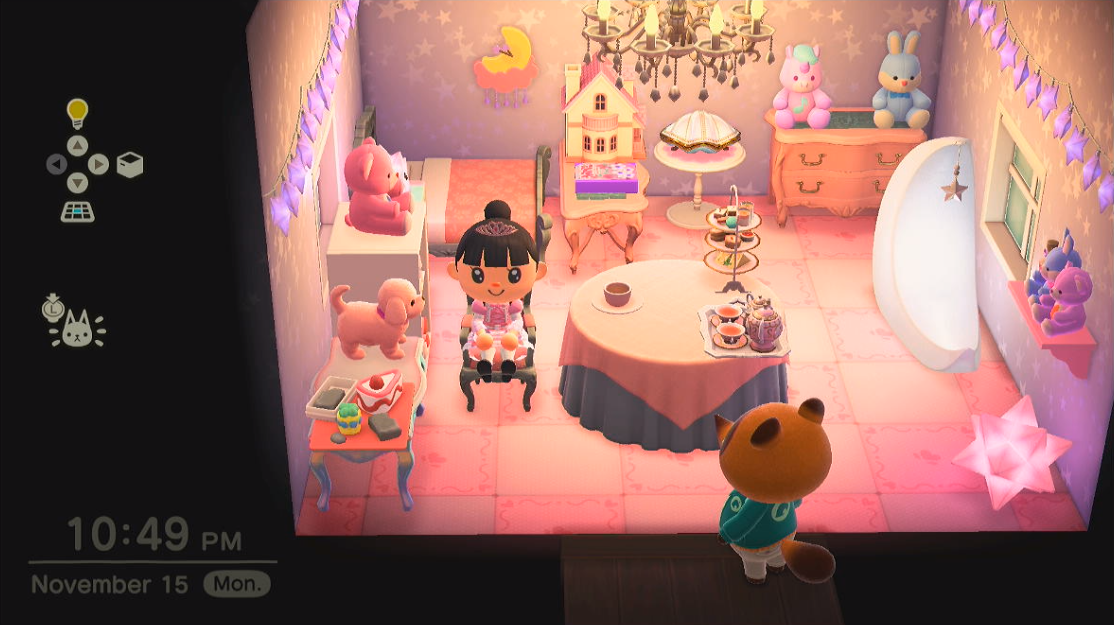 I received another letter from Wardell after hitting 30. I think it’s really sweet how he addresses us kinder each time– first it was just “My Friend” then “My Good Friend” and now “My Dear Friend”. I also got a letter from Tom Nook about the changes. 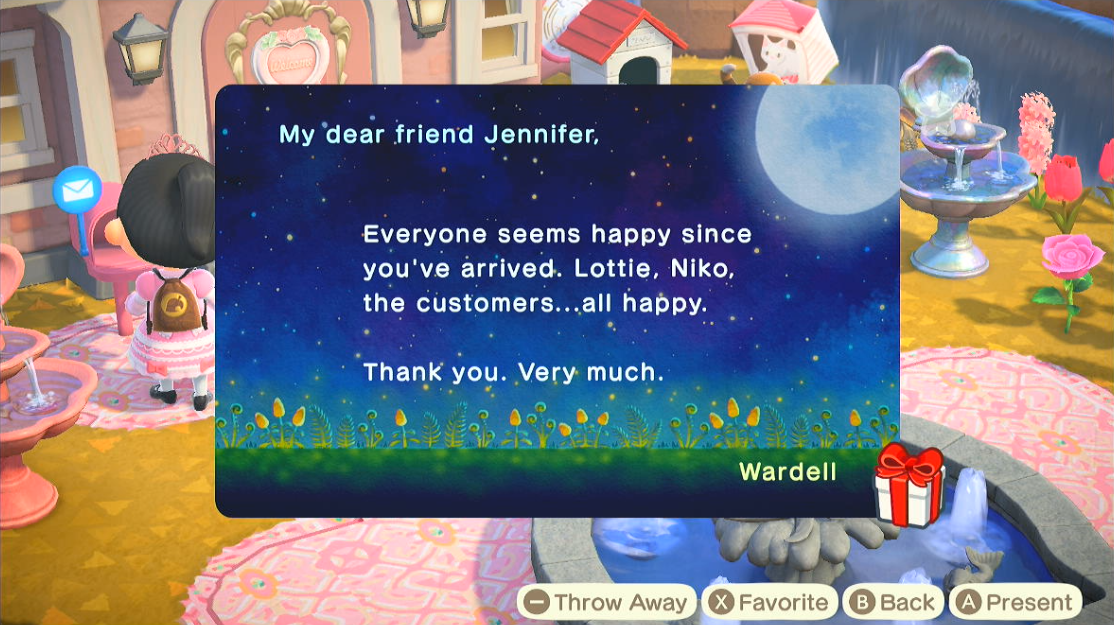 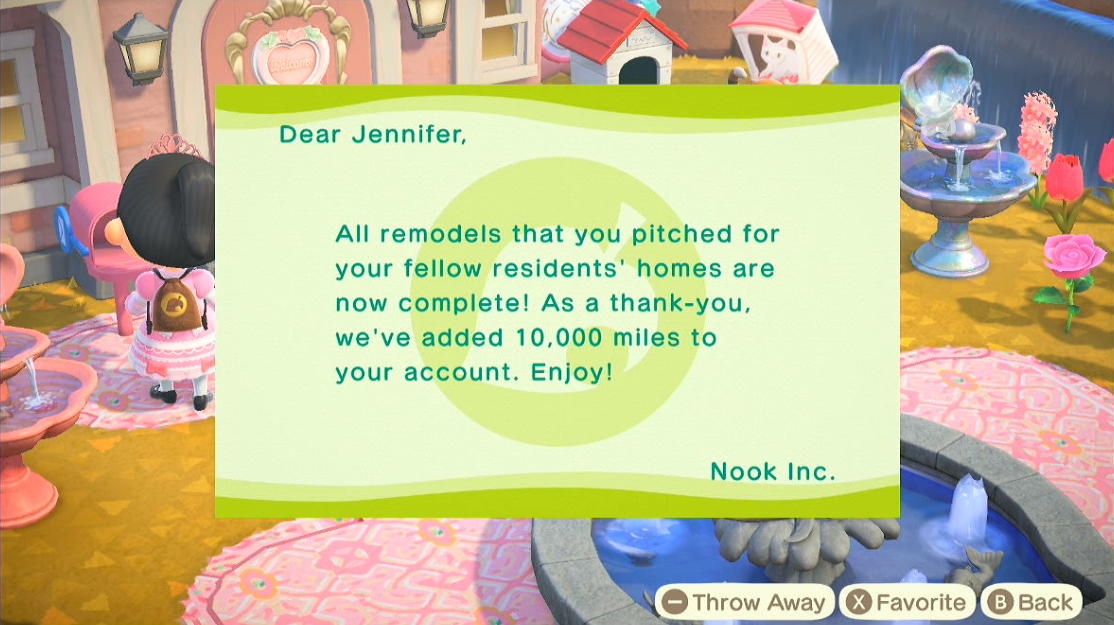 I decided to check out the Exterior adjustments and while most I was okay with, I did decide to change Diana’s back as the small adjustments made it too similar to Judy’s. 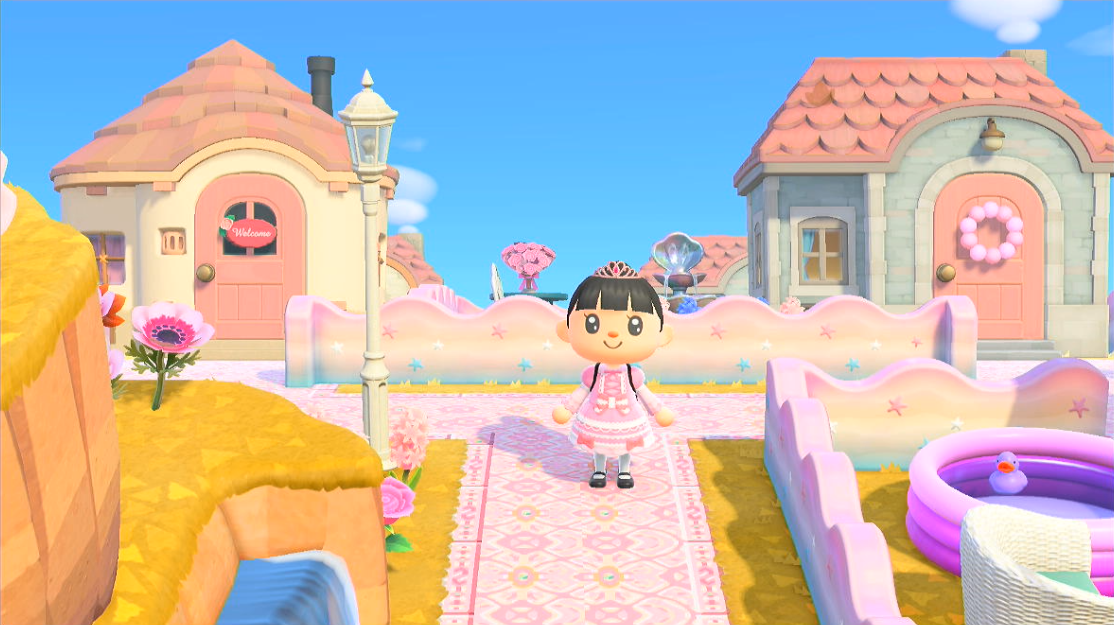 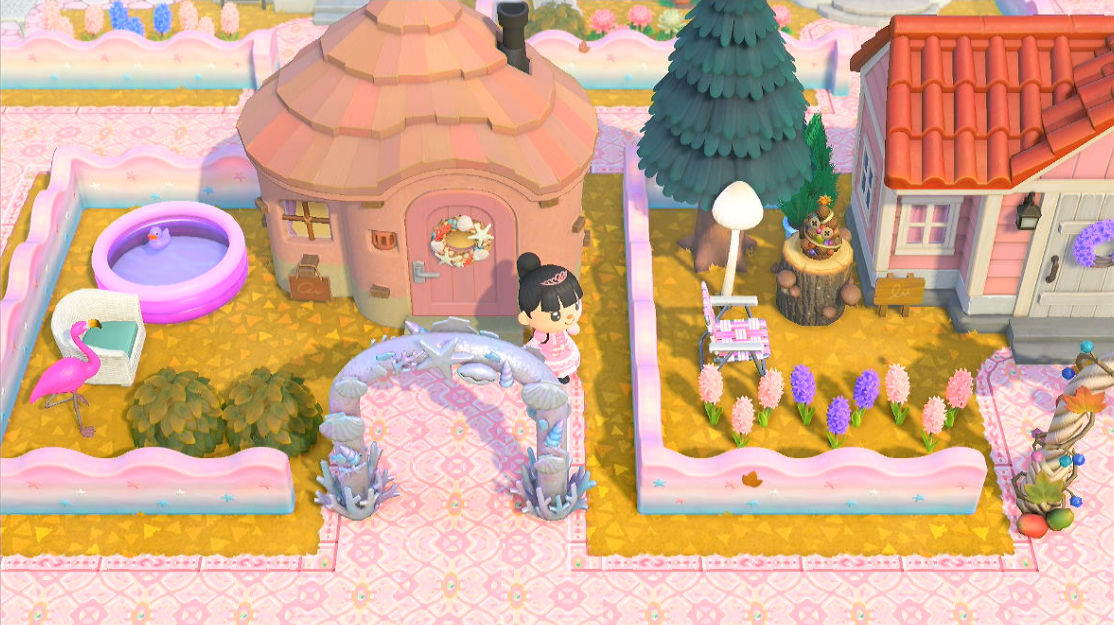 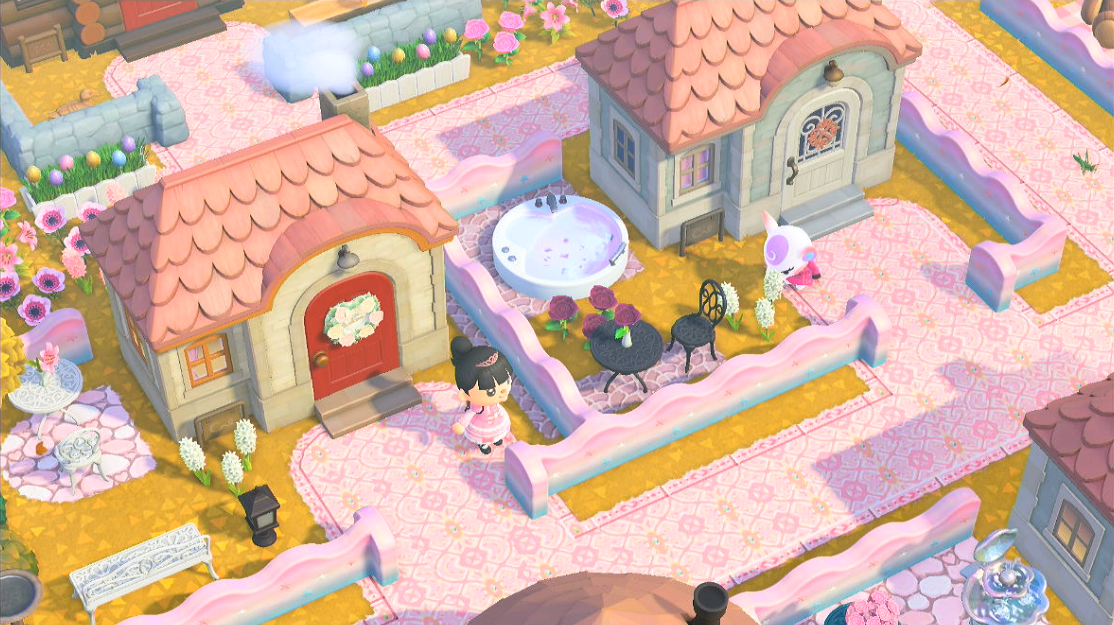 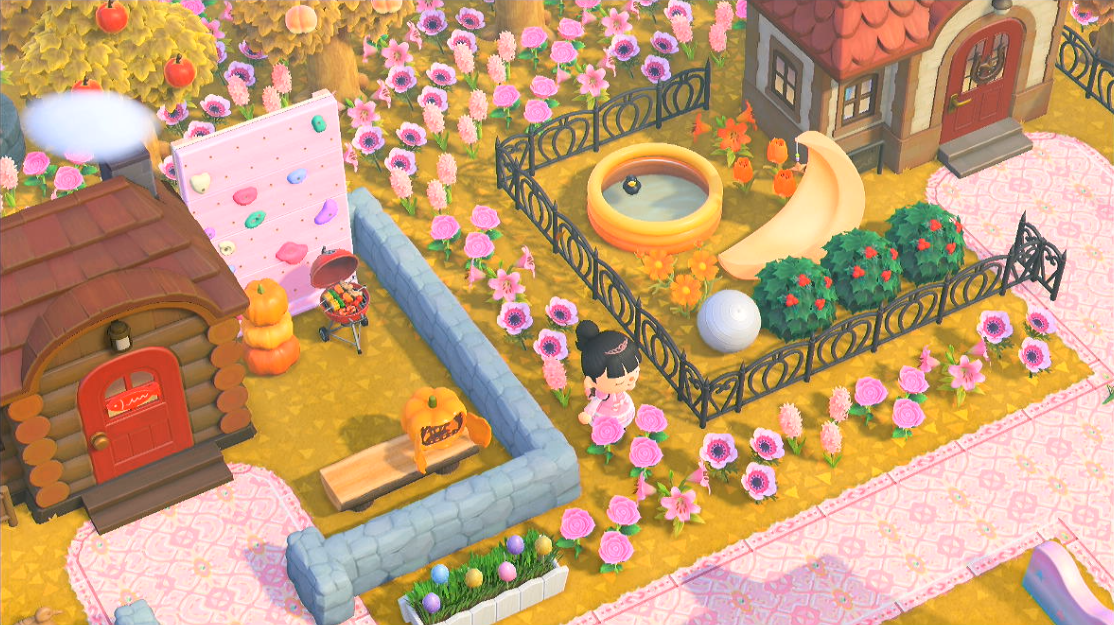 With the Renovations done, it was then time for Vacation Houses. While I had done Merengue’s Vacation House pretty early on as I didn’t realize it would happen immediately, I genuinely wanted to do Vacation Houses for ALL of my villagers, but I wanted to wait until I unlocked everything first. It was finally time though so I am doing my best to do them as I go! While you may have seen the videos already, I wanted to post this after I finished the other nine houses first.

Unlike the Renovations, I decided to do these in house order (Though, skipping Merengue’s as her Vacation Home is already done) so Teddy, Mira, Diana, Maple, Cookie, Judy, Flurry, Marina, and Peanut.

All the editing I did of their houses also finished up. While most I am happy with, I did change Diana’s exterior back to how it was originally as the adjustments made hers too similar to Judy’s.

One of the things I found really cute were the villagers’ reactions to you redoing their house.

Anyway, first up for a Vacation House was Teddy! 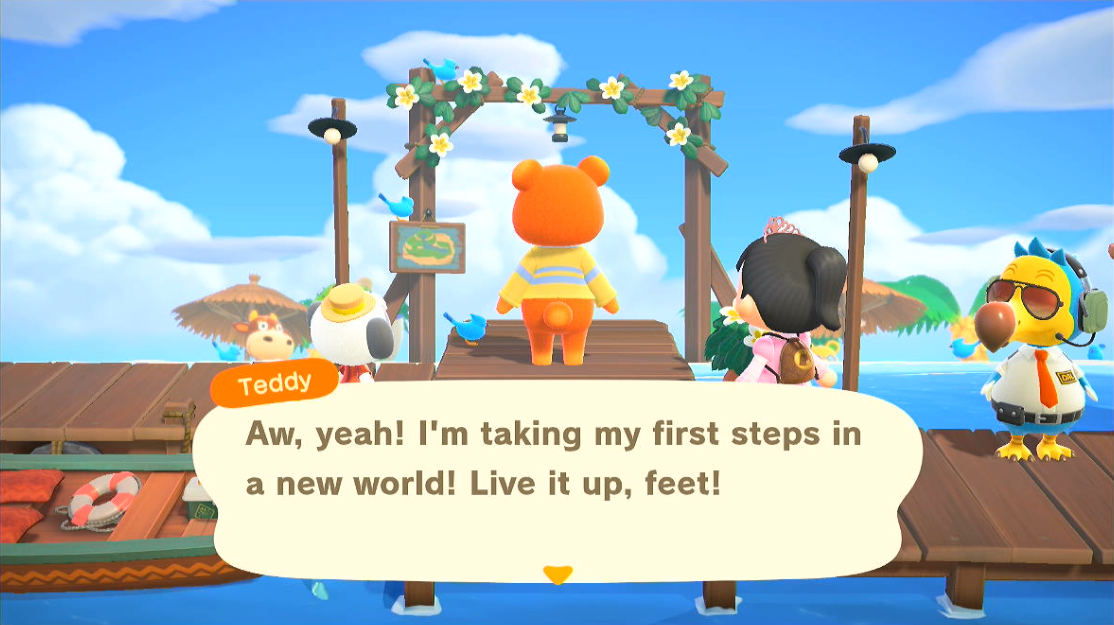 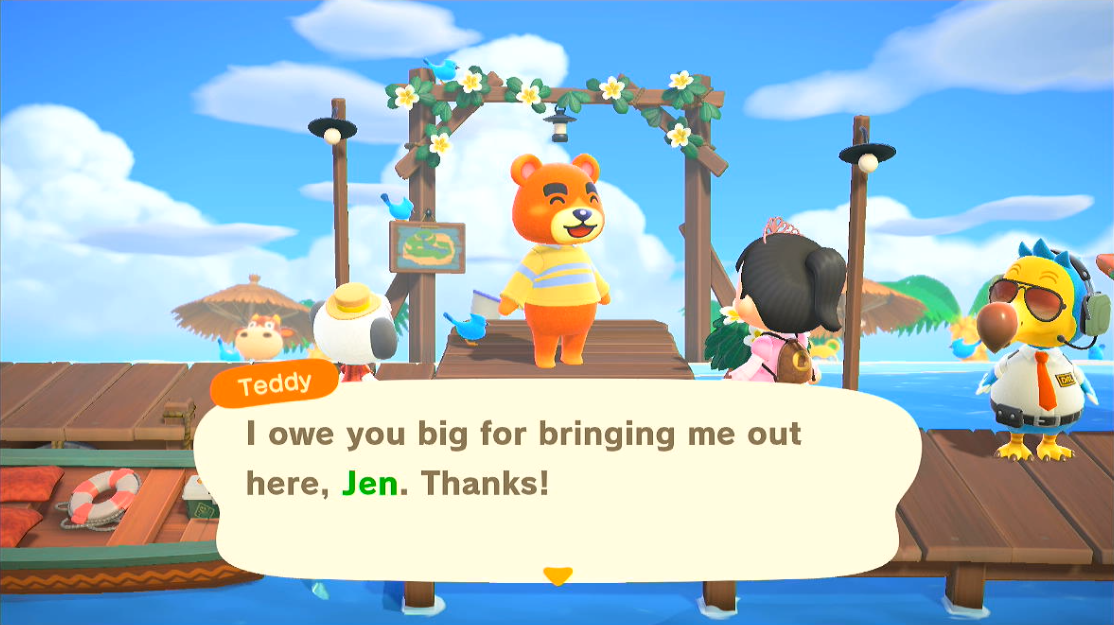 I then noticed Nat on the Beach who was trying to find the School so I took a moment to help him out first.

He gave us the ability to let bugs fly around a house which is nice, but… I wouldn’t want to catch bugs just to do this and I’m disappointed we couldn’t just get an option to add some like this if we caught them before like most of the things work in this.

With that done, I headed over to Teddy and… immediately had questions. 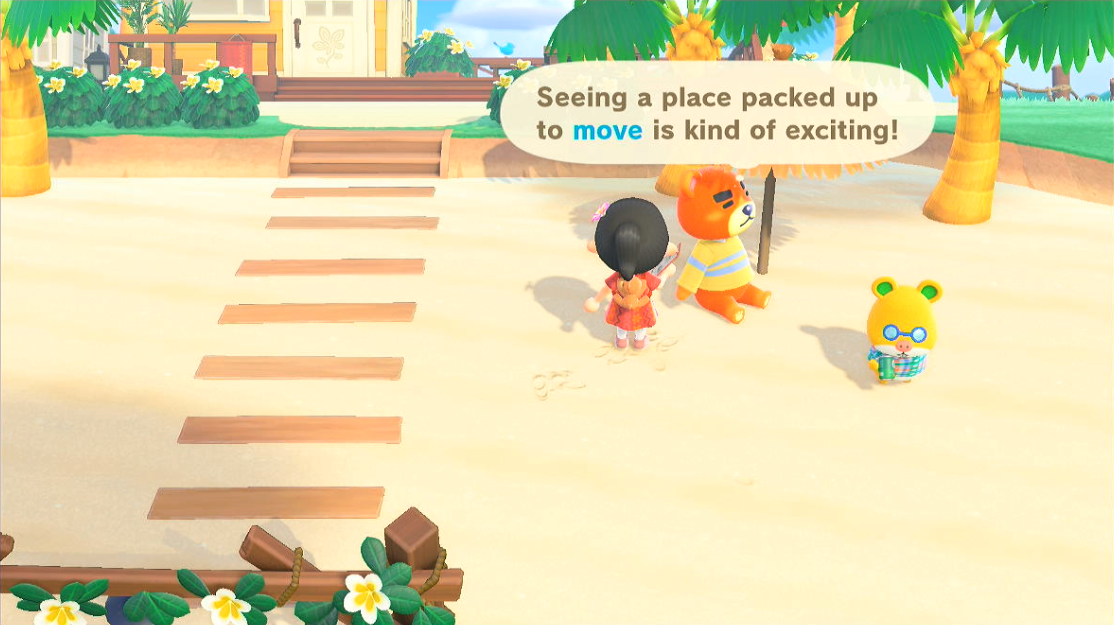 Teddy – Always on the Move

Teddy!! I am making you a nice vacation house!! Why do you immediately want to move out of it?? (I’m guessing it’s some reference tied to the “Moving Company” logo on the trucks, but it still made me sad)

I liked that this was closer to her old home style.

Diana – A Place to Meditate

This was also an option and just, this would’ve been more a summoning than a meditation I think… 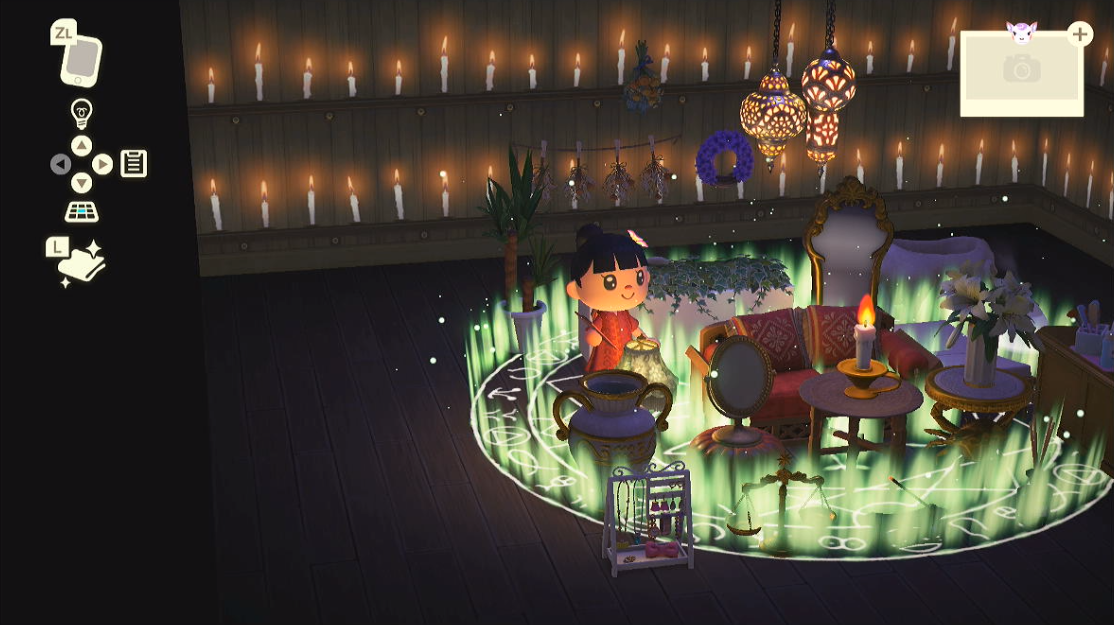 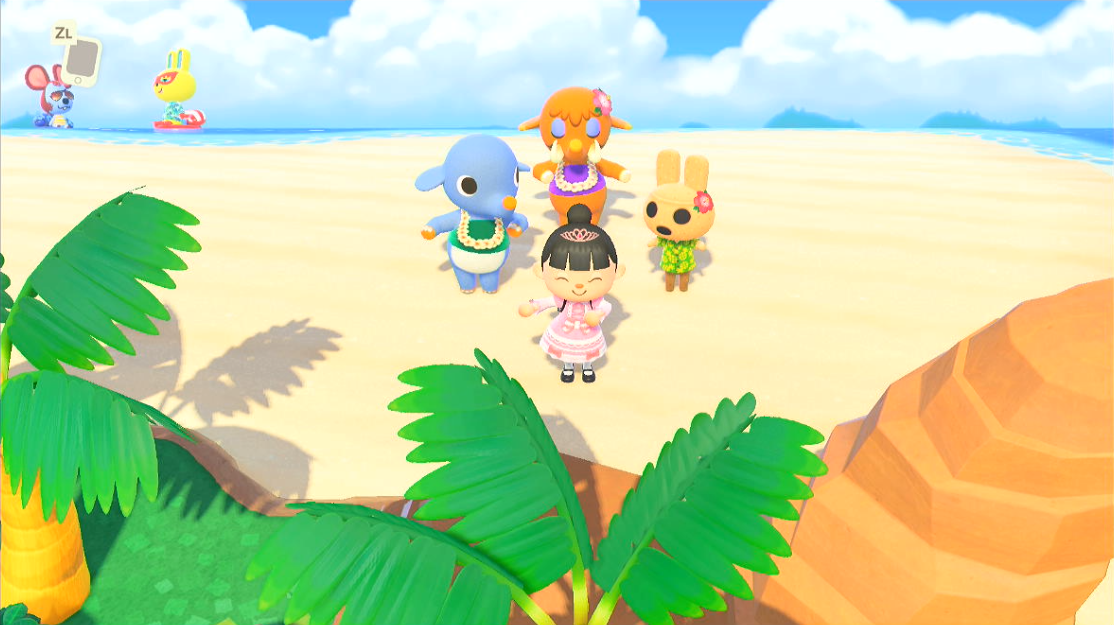 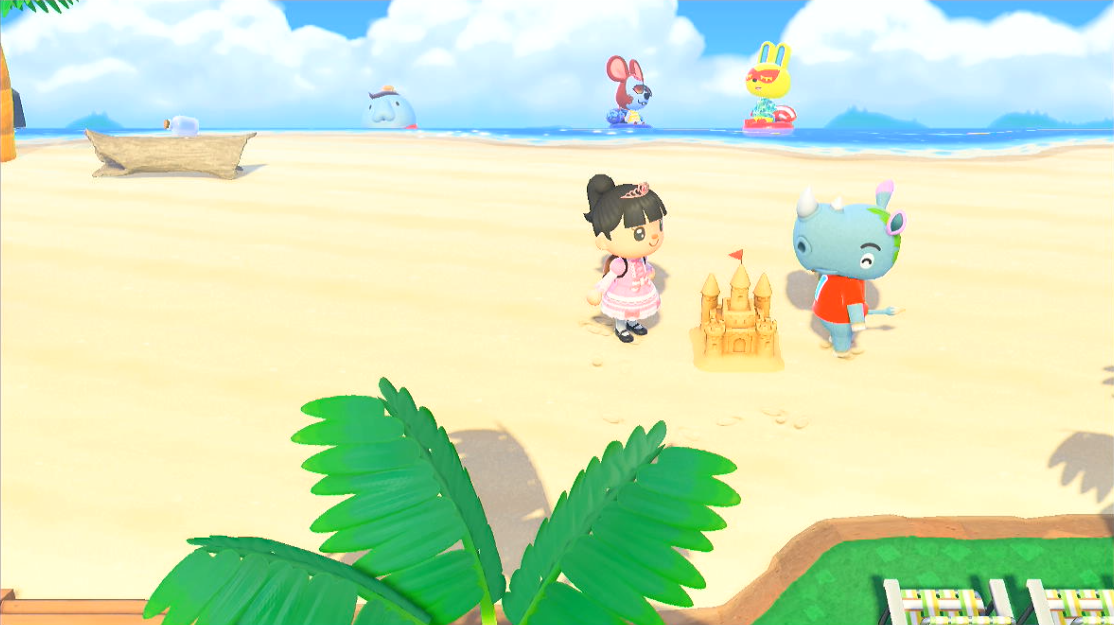 And even got more soundscapes with Wardell. 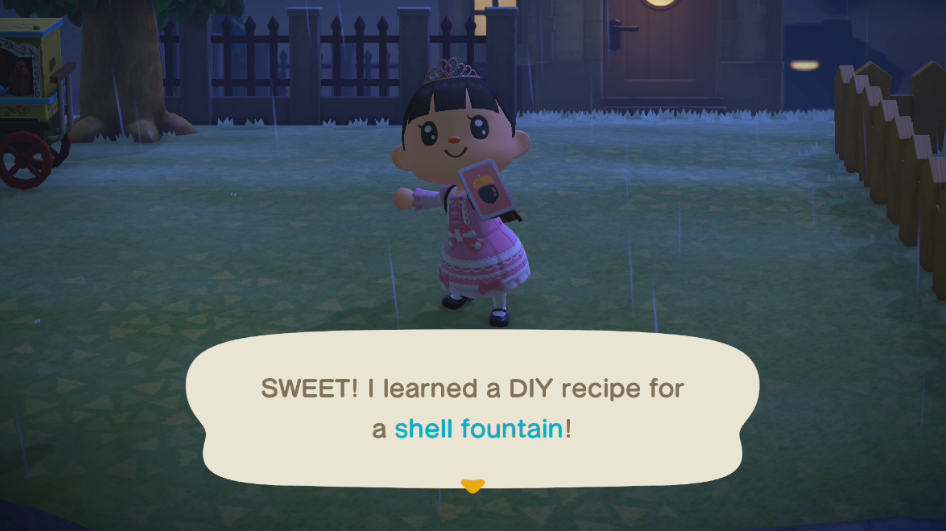 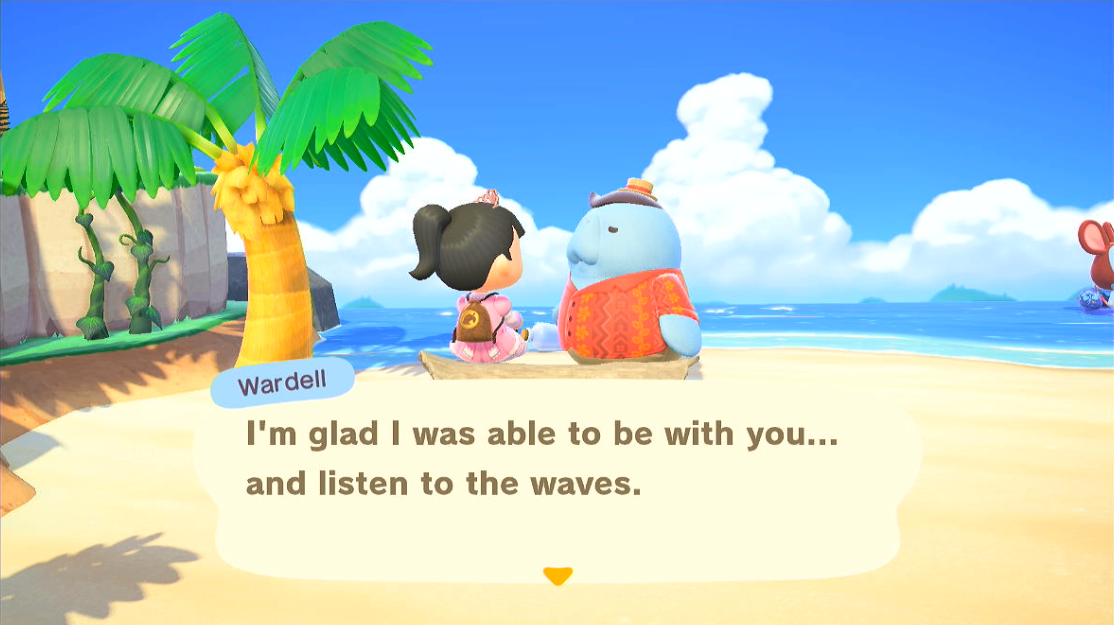 But I wasn’t having much luck and suddenly, Gruff pinged me so I felt obligated…

One thing I didn’t expect was to get a bonus for doing it. I tried looking around for Celia again, but she was gone again so I’ll have to try and do her house next time… 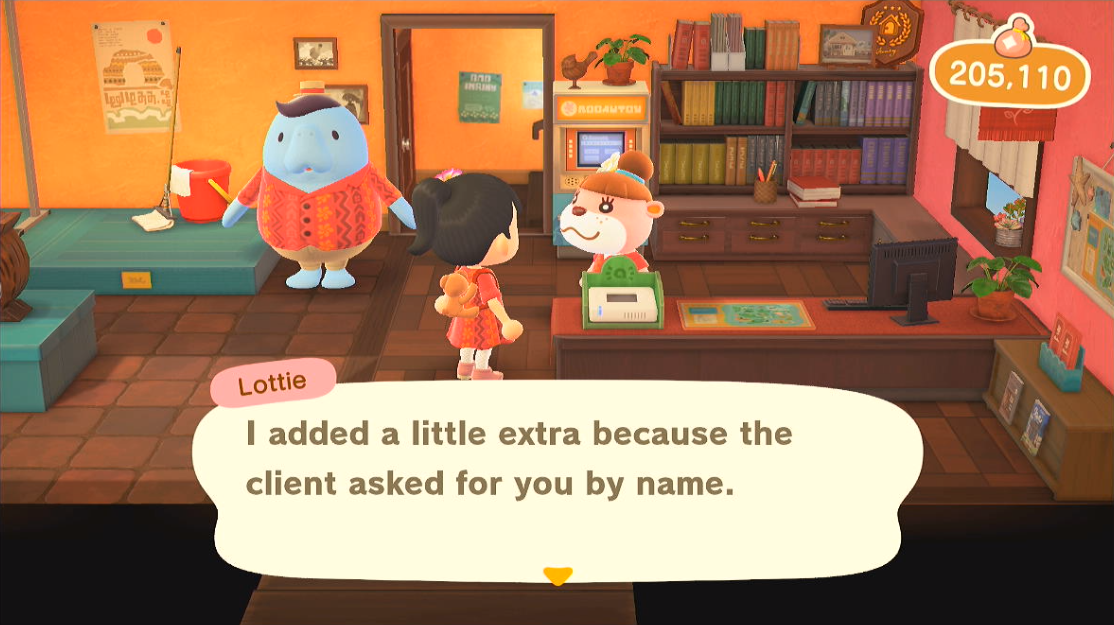 Either way, I still have 6 houses to go for all my Villagers to be done. I had to take another break though for the day.

I wasn’t able to play until late tonight. I’m not sure if that actually had an effect on Brewster’s dialogue or if it’s just as I’ve stopped in more, but I found it nice anyway. 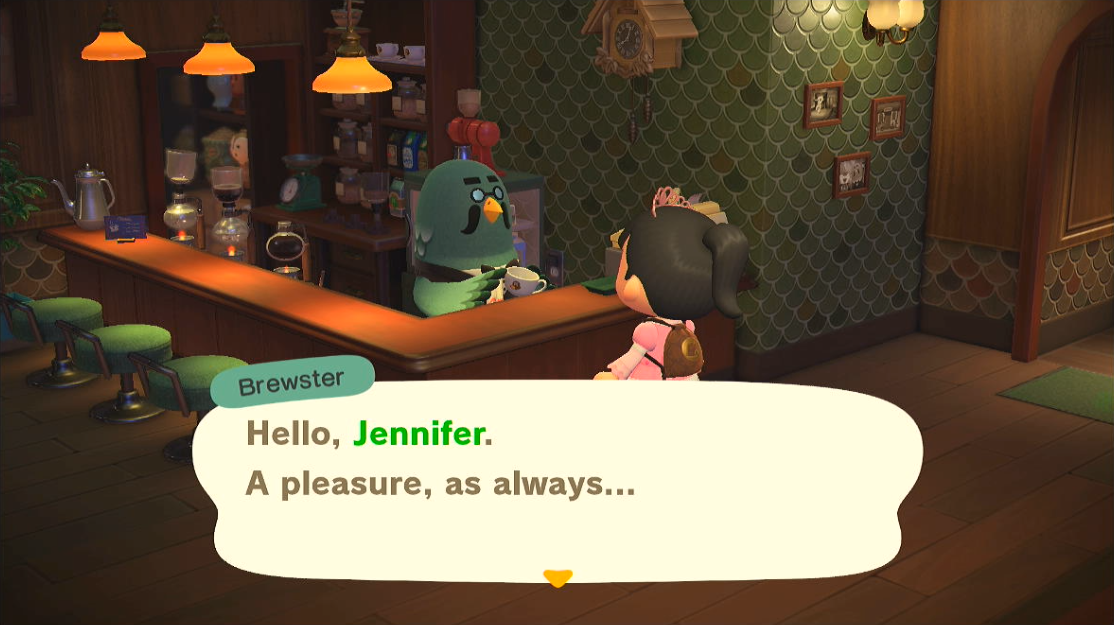 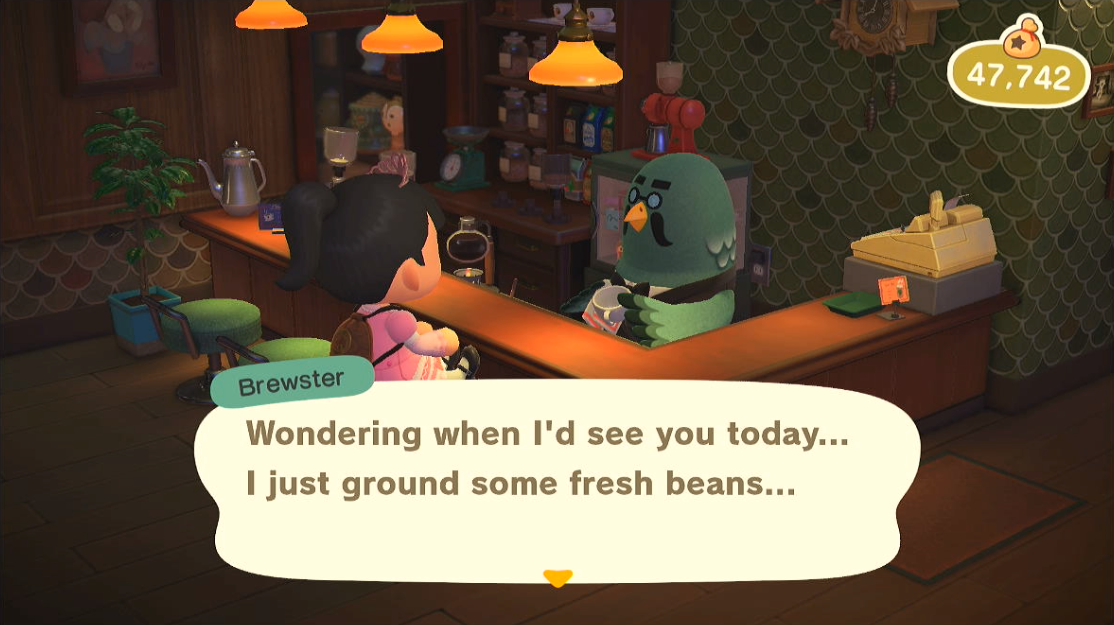 It was back to handing out Souvenir Chocolate now though and Maple was up next. Upon getting to the island though, Niko let me know that Lottie was looking for me apparently. 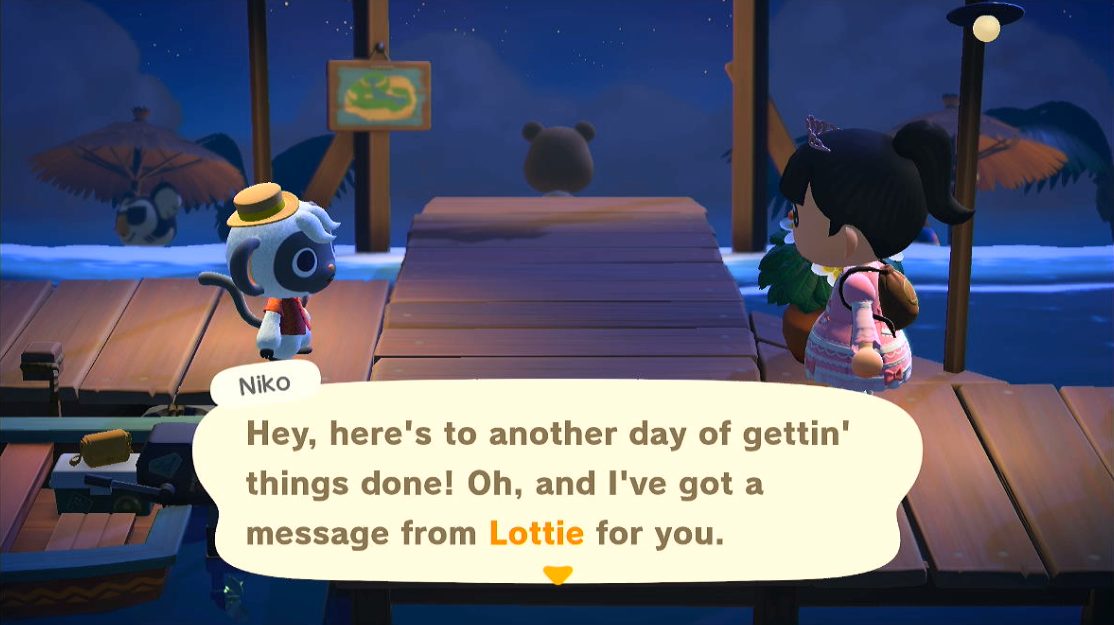 She gave me a new app for the Nook Phone– the “Room Sketch” app which essentially just… lets you test out room layouts wherever and even immediately implement them into a villager’s house. I’m guessing we can’t do the latter part in our own house, but it’s still helpful for trying to figure out things for my Basement… I’d love a version for terraforming too. 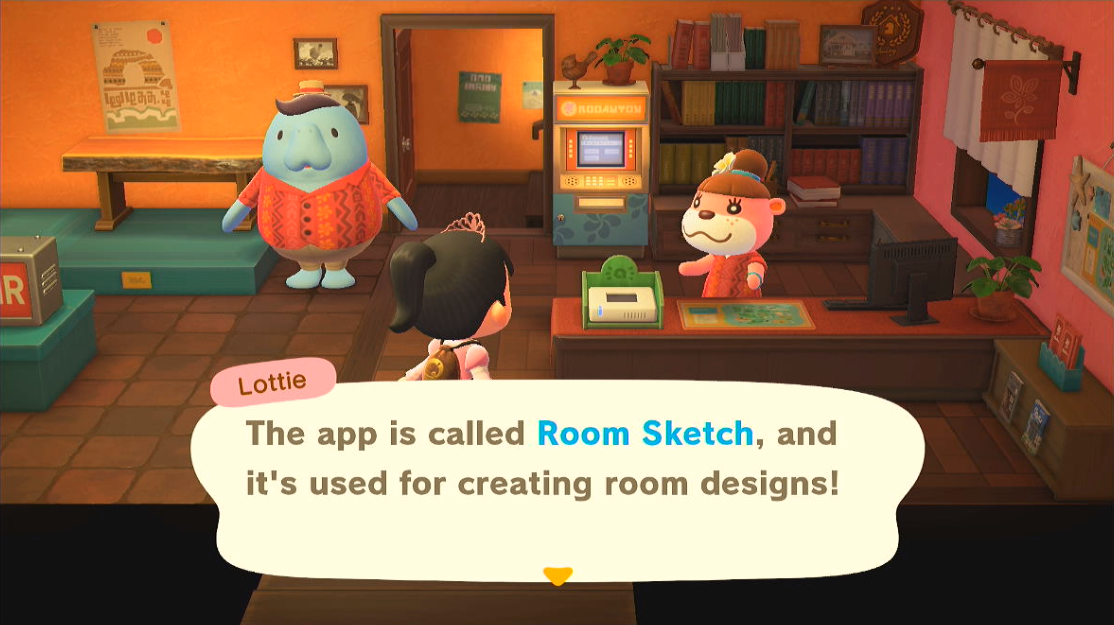 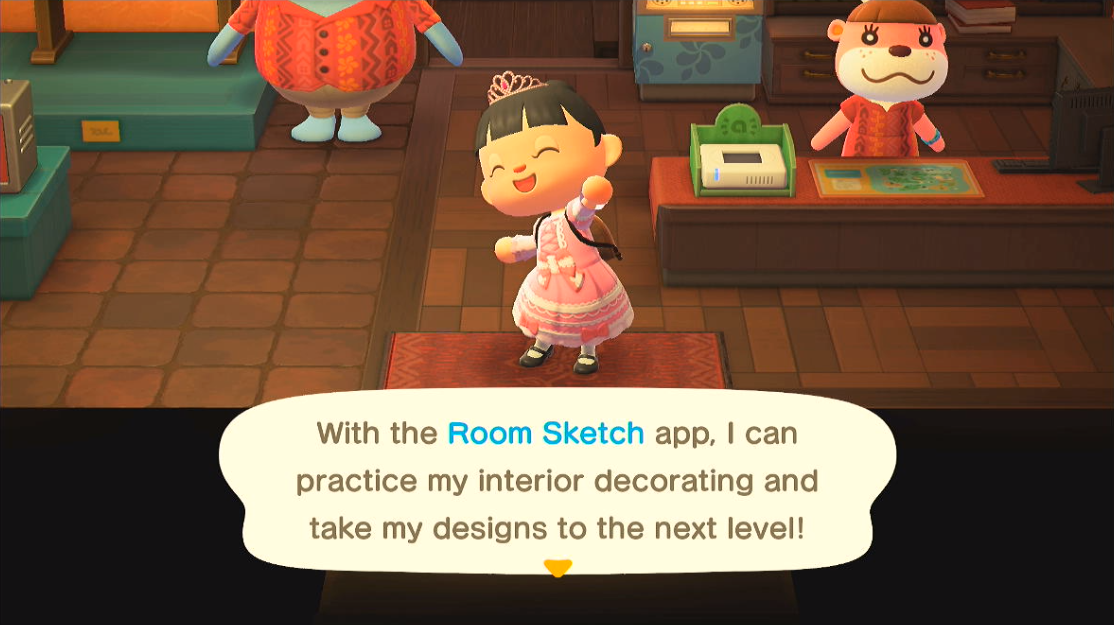 Next up was Cookie… And I was not prepared for this line. (Side note from the future: Peanut said it too, but it still hit just as hard) 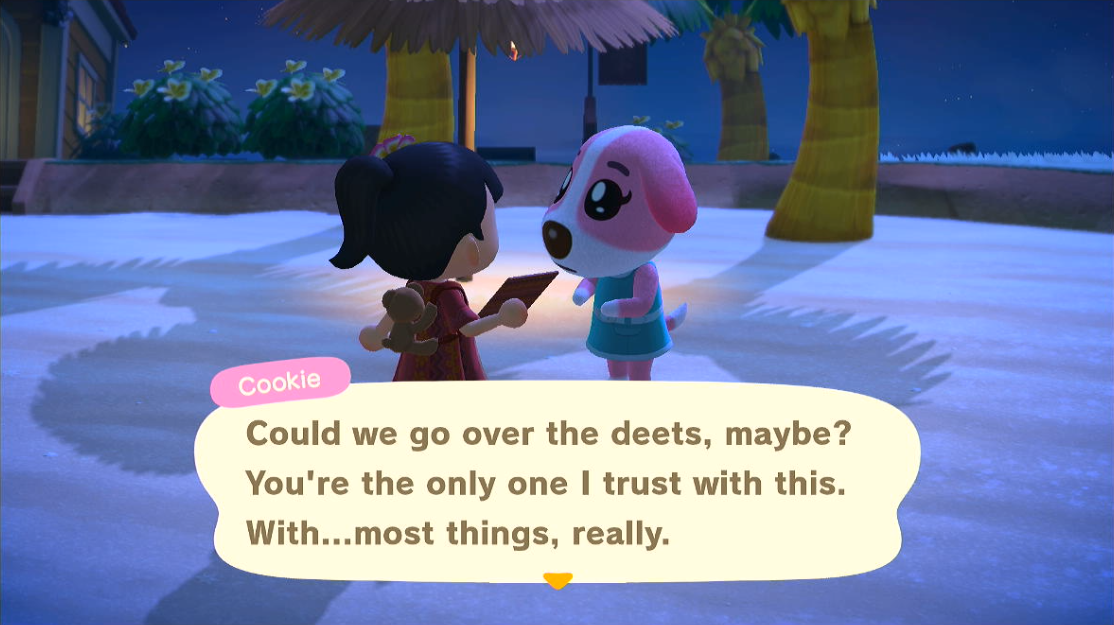 Peanut’s house actually made us hit 40 total Vacation Houses done now so it was time for another celebration. I picked the Restaurant this time as we haven’t celebrated there yet. 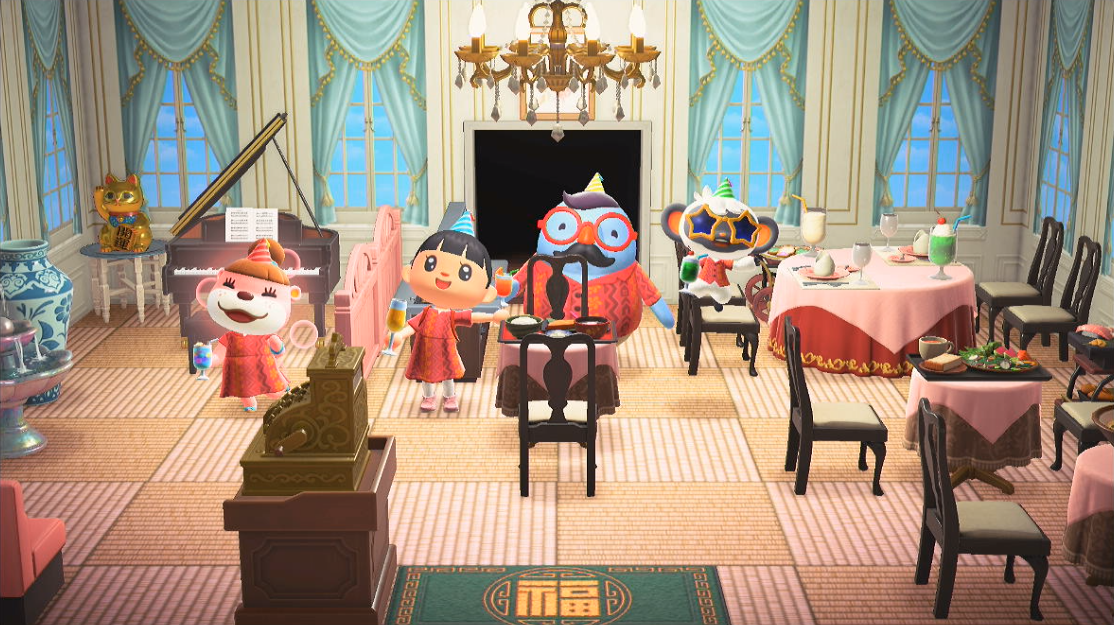 Now it’s just a matter of what to do next… I definitely want to do a house for every villager… Plus, I’ll be continuing to visit Brewster’s each day, but I still feel so overwhelmed with New Horizons right now and even a bit burnt out as a bunch of new items didn’t really fix most of my issues with the game.

I wish I could come up with an idea I’m happy with for the basement at least, even if I don’t end up overhauling the grove area after all (though, I still feel like I should in some way…).