I 100%’d the game with my husband in Co-Op mode a few days ago and debated if I wanted to write a longer post with my thoughts or not. I feel like the game has gone one way or the other– people either loved it or found it boring/not what they want from a Kirby game. Kind of like with Sonic, Kirby was another game where I played and enjoyed the original games, but it was a 3D game that really won me over to the Franchise– in this case, Kirby 64: The Crystal Shards.

When I played it, my only real complaint was that Kirby’s other friends weren’t also part of the adventure– I liked the copy abilities more really, but just kind of in a cameo sense like how King Dedede and Waddle Dee have stuck around. I also wished Adeleine and Ribbon stuck around more as well (I know they kind of did in Star Allies and Kirby Clash at least, but also as kind of a package deal and I just… let all of Kirby’s friends show up in a single game, okay??) as I genuinely liked both characters and Ribbon is probably my all-time favorite Kirby character. Despite my small nitpick with Crystal Shards though, I enjoyed more or less everything else about it. Many of my favorite copy abilities were in the game as well.

I found Forgotten Land to be the first game to make me feel the way I felt when I played Crystal Shards and genuinely had a lot of fun with it and the story. I also just… enjoy 3D adventuring more than 2D so I really liked exploring the world as well. I think if it was just the game itself, this would be a 10/10 perfect rating, but it’s a lot of the “extra” stuff where some of my frustrations come out.

Because I don’t always have a lot of free time lately paired with Spring hitting and allergies being a mess, I wanted to play on the Easier mode despite having experience with (and completing) other Kirby games. The Easier mode, however, is… kind of pointless. All it really gives you is bigger health bar which, while I’d be lying if I said I didn’t use it, didn’t really help with most of the issues I ran into. You also received less coins (though, it seemed to mainly just be a completion bonus at the end of each) which while not feeling like much, does add up when you’re struggling to get coins to upgrade abilities and get all the collectible gachapon figures.

The main things I struggled with were some of the missions that were exactly the same between the two difficulties– things like “Don’t take damage” or “Finish in *inserttimehere*” or “Don’t fall”. “Use a specific copy ability” also annoyed me, but as it is such a mainstay in a lot of Kirby games, I can’t be surprised by it… Some I am really bad with though and those are the challenges that had me closest to dying. I really wish the only hidden challenges were just to find hidden Waddle Dee in each stage, or they were truly optional and just gave coins like doing the Treasure Road levels in the time limit and completing the Harder versions of the Tilting minigame. The other problem we had was with the final Battle Arena which, sure, maybe we could have finished on the first try if we realized you were supposed to jump on the rocks that fell, and they weren’t just there to try and kill us like every other rock dropping fight in the game, but it just… wasn’t fun. I’m not the type of person who feels any joy or accomplishment from beating this “super hard challenge” and if it wasn’t required for numerous things for something I did care about, including hitting that 100%, I probably wouldn’t have bothered because I don’t really enjoy boss rushes. But this was required to get a figure, get the final cutscenes for the move theater to unlock the figure there, and a photo for Kirby’s house.

That said, while I wasn’t fond of some of the difficulty in the post-game world (especially certain bosses), I did enjoy going through those levels and was relieved we were told every time we had found everything in an area which I WISH was something that could be enabled in the main game as well as maybe it would’ve made at least some of the challenges a little less frustrating. I didn’t even necessarily hate all challenges– some were honestly pretty neat like “find the secret area” or “help the cute Ducklings get back to their mom” and those were really sweet, but with the former, usually a Waddle Dee was hidden there to find anyway, and the latter didn’t need to be an objective for me as I would still complete it every time regardless.

I feel like there’s such a huge misconception on what people play a game for and that only “hardcore” players care about collectibles and finding all the secret rooms and that’s not true. I would consider myself a more “relaxed” player in the sense that I prefer having a more relaxing time and not feeling like I have to constantly smash buttons, but I still love DOING everything. I love to experience all the content in a game, I love silly prizes and trinkets, and I do WANT to hit 100%, just on casual mode and not Ultra Hard difficulty and it’s such a stance that I feel is forgotten in games today where like… difficulty modes can exist or a whole game maybe can be hard, but having a game on just… all ages difficulty and then tying something to the back end only for people who like that super hard difficulty or playing a certain way is so incredibly frustrating. It’s why I hate the Battle Tower-esque stuff in Pokemon, it’s part of why Pokemon Legends: Arceus is still frustrating me (We’ll get to that in a future post), it’s why I get so frustrated with achievements in general (and thus, many of those hidden challenges) because they’re not truly optional if there’s some special item or trinket locked behind them or they literally require a percent*. It’s the same thing that bothers me about high score tables– let the people who care about those things see it, but don’t force everyone to have to do it for the one special thing. I don’t think Post-Game should be synonymous with “Hard Content”– Post game is just… content after the main part of the game, something that adds onto or expands the story or your place it in. It should not just be extra hard content. That isn’t to say there can’t be a place in a game for that, but why does it have to be tied to anything else? And using Kirby especially, the “post-game” story is almost always important to the game story itself so why does it suddenly need to be so much more difficult? ESPECIALLY IF YOU’RE PLAYING ON THE EASIER DIFFICULTY. It just baffles me how often rewards are tied to these harder difficulty things because most people who actually want to do them are doing it for the challenge itself– not for extra story, not for that percentage, not for what you get from it, just the challenge, so it just punishes people who maybe can’t manage that challenge who still did everything else in the game before the difficulty got even higher for no real reason.

*As one quick example– Sizeable literally lists an achievement as “Optional”, but Achievement pages do not care. I am always going to be missing one because even ignoring that I could care less to speed run through it, I would never reset my progress in the first place to do so.

Ignoring my usual side-eyeing of video games locking things as the oddest casual player ever, I will say one of my favorite things was actually Kirby’s house. I wish we had an Interior Design Waddle Dee we could’ve bought stuff from, even if it was just appearances for the furniture already there. I also would have loved to actually be able to display more figures which I think was my biggest complaint– there are 256 figures in the game and you can only display 3. 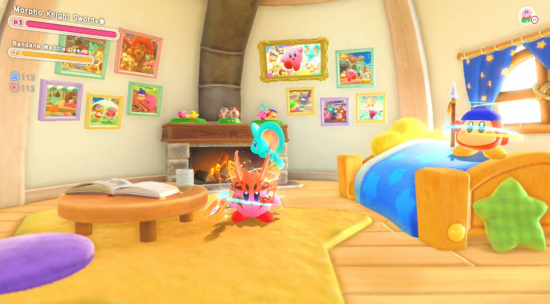 As an aside, I love these Puppy Plushies and want them to be real. 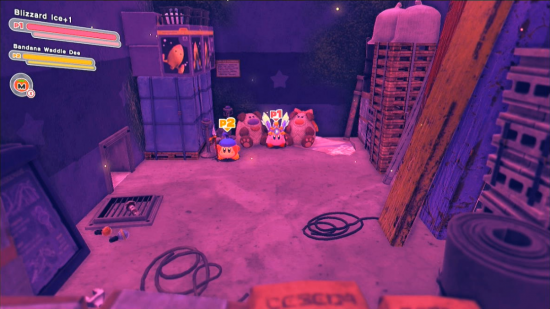 There also ARE truly some hidden stuff that do not add to your percent like all three hidden HAL Rooms. I would say the first is a little scary to get to (though, the challenge itself isn’t hard if you can actually aim), the second is definitely the easiest, and the third is a huge pain and I’m genuinely surprised we made it. 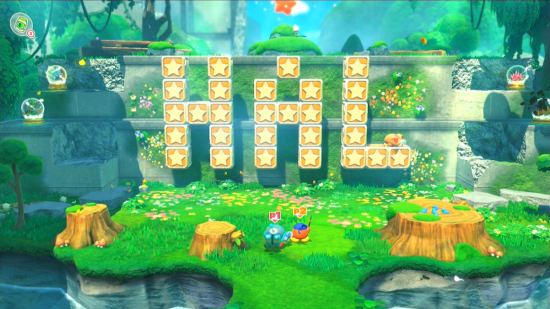 I also realized I never really spoke about Mouthful mode because honestly, despite the advertising of the gimmick, it wasn’t THAT in your face and a lot of them were pretty forgettable. Some I liked, some I found just okay, and I would say the only one I truly disliked/found annoying was the Fork Lift one which only felt like it had to be there because Kirby’s hover ability is just… incredibly nerfed in the game. He flies so slowly and can’t get particularly high either and it’s VERY strange to have a Kirby game where the hover ability does not just feel incredibly worthless, but often is the last thing you want to do because of how slow it is as well. The only other real bonus with mouthful mode is several of the sections had a “Retry” button if you missed something which was nice, but overall, I just didn’t feel any which way when it came to the power-ups. Water Balloon was probably my favorite as I had the easiest time using it, but I also had fun with Cone which I feel had the more interesting moments for when it needed to be used. The mode was often just used for one specific part of the game so I wouldn’t care if they didn’t return, especially if it means Kirby’s hover ability won’t be terrible.

Regardless, in the end, did I like the game? For the most part, yes. I would even recommend to most Kirby fans as honestly, most don’t share my issues anyway. My entire playthrough is even up on Youtube. That said, while I am glad I got 100%, the main feeling I had was a combination of relief and frustration– I had fun when I was experiencing the story, but some of the things we had to do to get to this point just… weren’t fun for me and the #1 feeling I had was just being glad we were done, versus actually being happy having played. 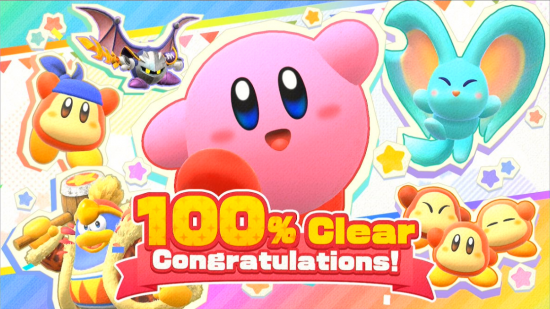