I don’t always give my game thoughts here– usually because it doesn’t feel like I have enough to say beyond what I put in a description, but I’ve played a lot of this game recently (despite the size of my video) and it was one I had been really looking forward to since the initial announcement. As a disclaimer, I DID receive a code for the game, but I am writing this post entirely on my own volition. And of course, if you guys would enjoy more Opinion-piece-esque posts (and not really reviews or at best, casual ones), feel free to let me know :)

To start, I will say the one thing the game always made me think of as I played was Diner Dash, though, a much more relaxed version. Customers sit where they want and while you prepare the meals, any of your staff can as well. So, if Staff A takes the orders, you can fill and deliver it. Or maybe you grab the order and Staff A takes care of making it and Staff B delivers it. It’s very flexible which is honestly kind of nice. I also like that customers don’t really get angry (Though, they may be disappointed by the decor or if you don’t have what they want) so despite having that kind of more fast-paced feeling in the terms of grabbing food and customers coming in, it’s overall very relaxing.

I will say though in its simplicity with the methods, it also felt a little convoluted with how much. There are 6 different currencies plus the “Delight” level which is used to unlock new things and upgrade the shrine. Shop items usually took 1-2 of the different currencies and you got each currency based off what customers stopped by. Me, refusing to yield on my eclectic tastes that tend to involve as much as I can fit, just constantly invited everyone and did my best. This was how my Cafe looked by the end of my playthrough: 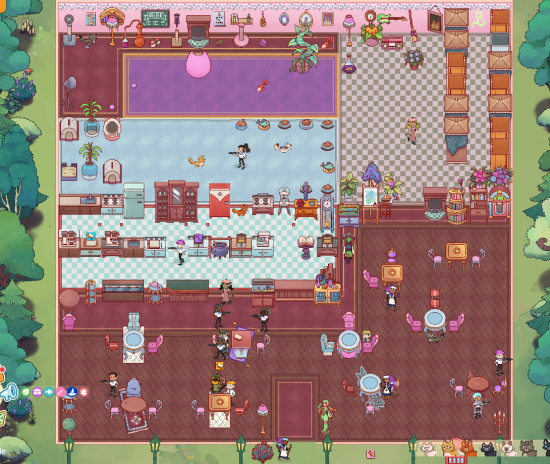 The game also has a story to go along with everything where making your Cafe better will help raise Customer’s Delight which in turn, helps restore the shrine (in addition to giving you various upgrades). Alongside this, there are 5 Side Stories for each of the named characters you meet along the way. I actually really liked all the characters and the messages in the stories were really sweet. I would say my only complaint here is they didn’t really feel like Regulars when after their initial introductions during the first week, they only showed up if you called them. I really wish there was a chance, even if not super common, that they showed up regardless. Them only showing up for calling after essentially one conversation in your Cafe felt really odd and as nice as the friendship conversations were at each milestone, it never really felt like we were truly becoming friends at the Cafe as they really were no different than any other customer besides their model and a dialogue box. Despite that, the friendship rewards were always really nice with the final ones even giving you special lures for some more unique Cats you could get that have special traits like having no needs or more materials or delight. I would say my only concern there is how much those extra benefits help closer to the end when maybe you don’t need that help as much.

Of course, this is a Cat Cafe, but when it comes down to it, there’s not too much to do with the Cats themselves. You can buy them stuff that they’ll use, you refill their food bowls, clean their litter boxes, and sometimes they’ll ask for some pets, but most of the time they’ll just wander around doing whatever, which, I suppose is pretty accurate to how Cats are anyway. You’re initially limited to 5 Cats (and can get up to 9 with Shrine Upgrades) and are encouraged to adopt the Cats out to people looking for a Cat… but since you can level the Cats to make them appeal to more types of people and/or earn more materials, I kind of just held onto all of mine and was initially really sad because there’s SO many neat Cats and each with a unique name and appearance and sometimes a unique skill as well that you can level up to make even better and I just… didn’t want any of them to leave. I wasn’t sure what I was doing to do when I hit the 9 limit, but at the end of the game, you actually get a huge upgrade to the amount of Cats you can have to over 50 along with an upgrade to the amount of seats you can place as well.

The only thing is once you’ve finished the game, the only thing left to do is max friendships, if you haven’t yet, and collect Cats and I’m not sure how many people will continue to do those things, so it almost feels like some of the additions go to waste. I personally did enjoy them though, especially more Cats. And I think that may be the problem for most people– the game is very passive and while I found it relaxing, I know others may find it boring. Some cafe days after getting more staff and leveling up their skills, I could literally just let them take care of almost everything. I did find some stuff they would never do though– like they never seemed to actually help at all with the Cats for some reason.

I would love to see updates in the future, maybe adding a little more story or just more items (though, unless our glade gets bigger, I’ll admit my cafe is kind of at its limit). Or maybe even just some options for the staff– I would’ve loved being able to adjust the uniform to some extent or even have the option for a skirt for my character.

Regardless, I genuinely did enjoy the game. I think it’s a little hard with so many different currencies, but I found the game really cute and relaxing, but the game definitely doesn’t really feel like a management game, but gives me a lot of nostalgia for some of the old quick cooking games that weren’t just… pick all the right items from the Kitchen to match someone’s order. If you’re interested in the game, you can check it out on Steam here :)