As I mentioned at the end of Day 3, Day 4’s main focus was extreme friending so I took the advice of someone in the Discord and just started slamming them with as many gifts as possible, but I also noticed that they seemed to get a lot of experience when doing whatever skill you gave them (IE: So a character who you made good at mining seems to get more expensive when you’re mining) and I ended up going back and forth between the two.

Before I started though, I noticed the game switched over at 4AM today so I stopped by Scrooge’s Shop and was VERY excited to see this item finally in stock. Plus, a cute pink couch! It’s a bit overly big though… I don’t think the long couch usually stretches that long. 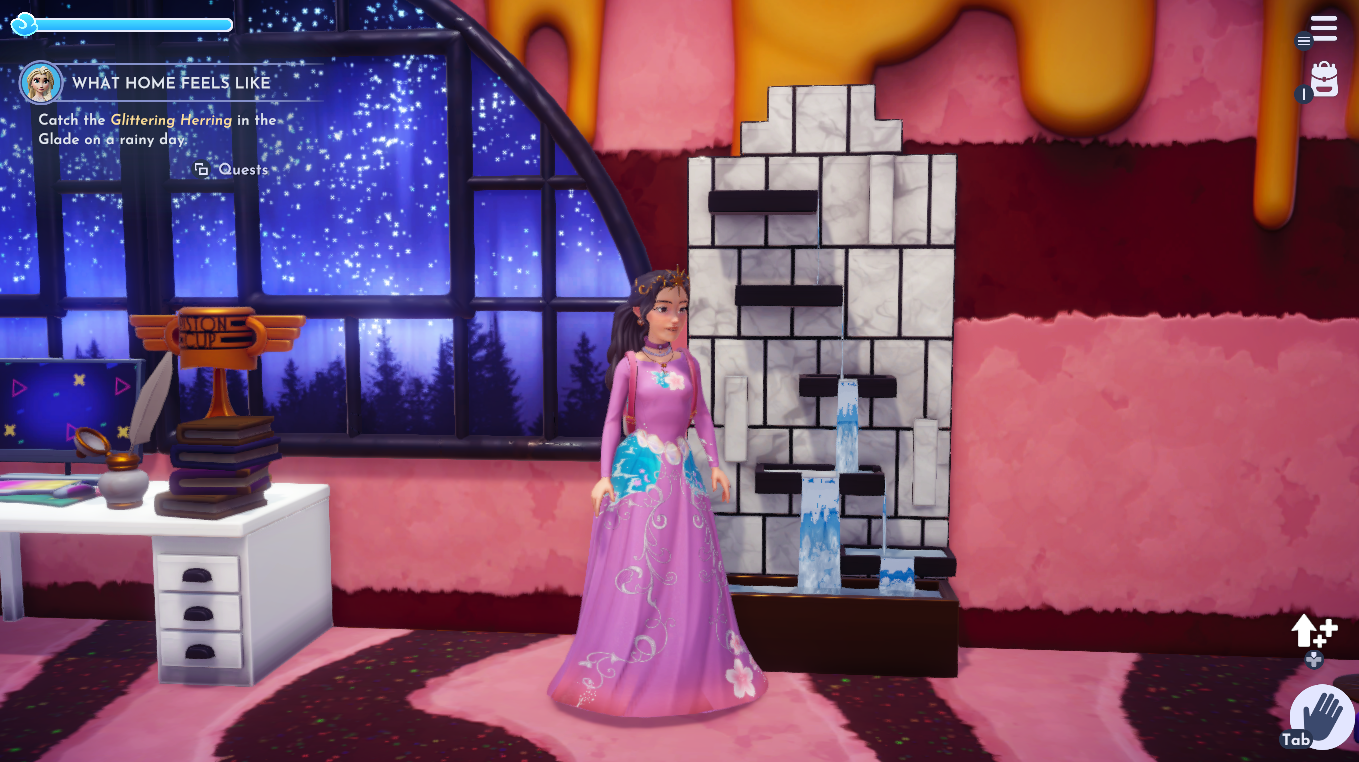 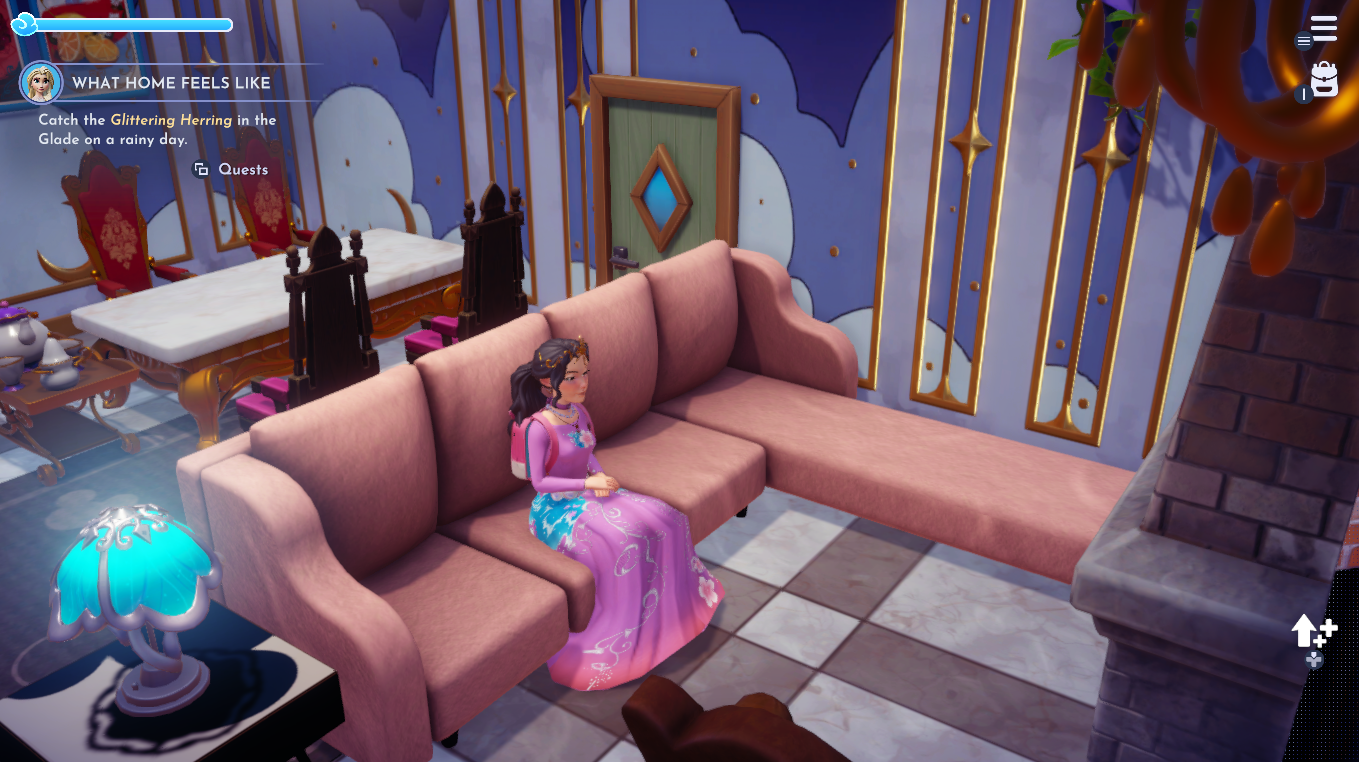 If you’re wondering why these are just in my home, I was so excited I bought them immediately before even considering screenshots.

As mentioned, my main goals were friendship related– both the Characters and the Critters. Questing is always my favorite part of these types of things and I love collecting pets, so it’s not too much a surprise.

Despite not really being a fan of the villains, they seem to hold the most lore of the valley and considering Mother Gothel’s questline so far, it feels important to complete for when Rapunzel and Flynn may end up being added. Her next quest was one of the first I had that was actually time sensitive, needing to find three Fragments all locked to specific times of day. The Dawn Fragment available in the morning at Sunlit Plateau, the Noon Fragment available mid-day in the Glade of Truth, and the Dusk Fragment available at night in the Forest of Valor.

As I looked more into Critters as well, I noticed some were only available certain days and a handful even just select hours. I’ve been doing my best to document favorite foods for them, but with Sunbirds seemingly to have different favorites based on their colors and Ravens kind of MIA, it’s still been a bit tricky to find out.

Be sure to check out this page for more Critter information

Squirrels are definitely the easiest to try and feed. You literally just go up to them and they let you. Rabbits and Foxes, however, like to play 3 quick games of tag before you can approach. Sunbirds can also be a little tricky– you essentially need to approach them while they’re flying in place. Turtles are probably the second easiest– you just need to approach them and be patient until they pop their head back out of their shell.
Raccoons, Crocodiles, and Foxes are frustrating to say the least. Raccoons and Crocodiles both work with a game of hot and cold– you need to run towards them and pause when they stop or look at you. If they are standing up/have their head up, stay still, if they are leaning down, move closer, until you are close enough to get the option.

I’m hoping to get all of them befriended ASAP if only so I can never do this again. Alas, I’ll still have to for Dreamlight Tasks at least, but honestly, it can be such a pain to find them sometimes and exhausting just repeatedly failing to approach them. It’s very finnicky, even if you know what to do.

Regardless, I ended up working on Mickey’s friendship next. His level 10 friendship reward was the very first I really wanted, due to my love of fountains, so it was nice to finally focus a bit on him. As an aside, I really want a furniture item that is essentially a waterfall-pond like this part of the Forest.

Focusing back on Mickey’s quest, the final part had us opening a secret door behind a curtain in the Castle. I knew that curtain looked suspicious. The room was pretty neat and I found another suspicious item in it that I’m curious what it could be used for in the future… 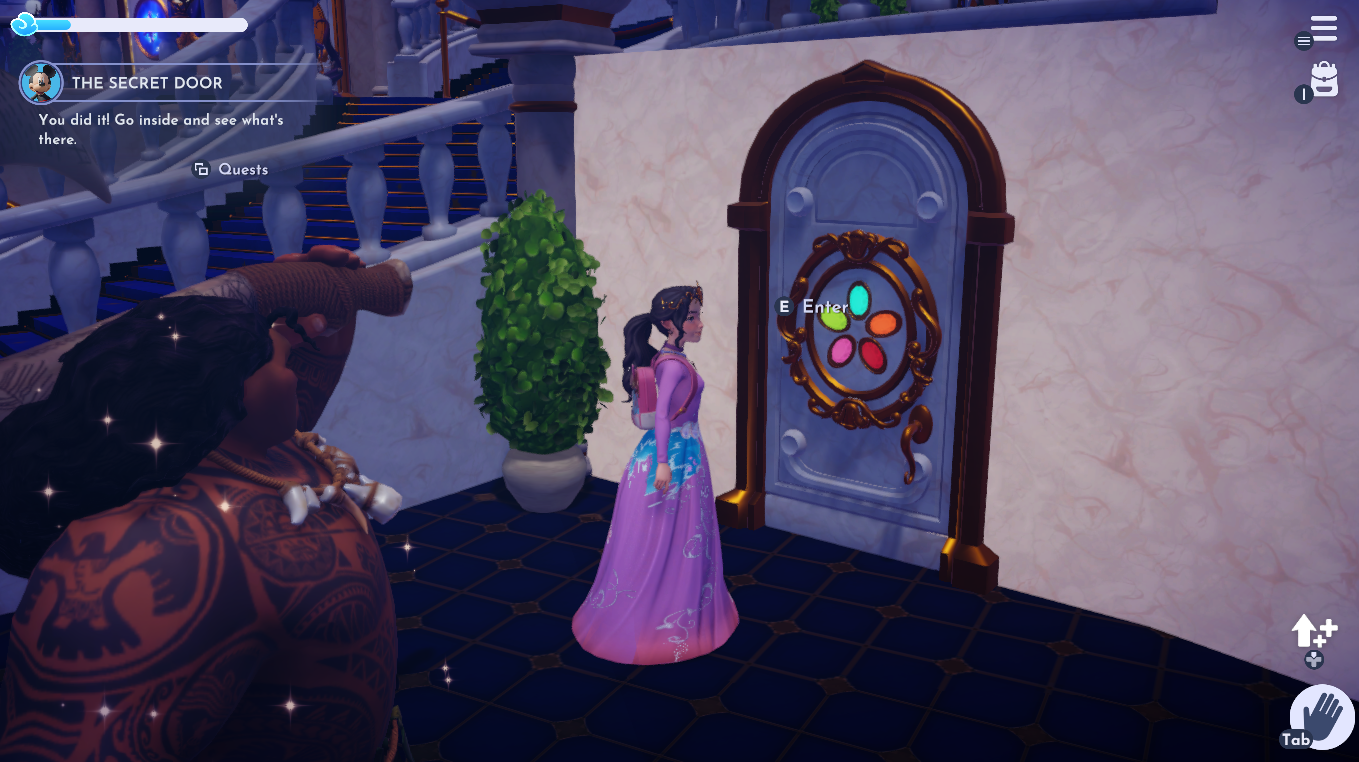 It actually took me quite a while to earn Tourmaline– I’ve been trying but had only gotten the Shiny version once. At least when I DID finally get it, I got three, so I was able to both complete this and have some for the future. I also finally unlocked this flooring I’ve been eyeing only for it to apparently require a gemstone we can’t even access yet T__T

I was pretty disappointed with the Fountain though… There’s no actual water flowing so it just looks like a fancy water pond. The Castle fountain doesn’t flow either. 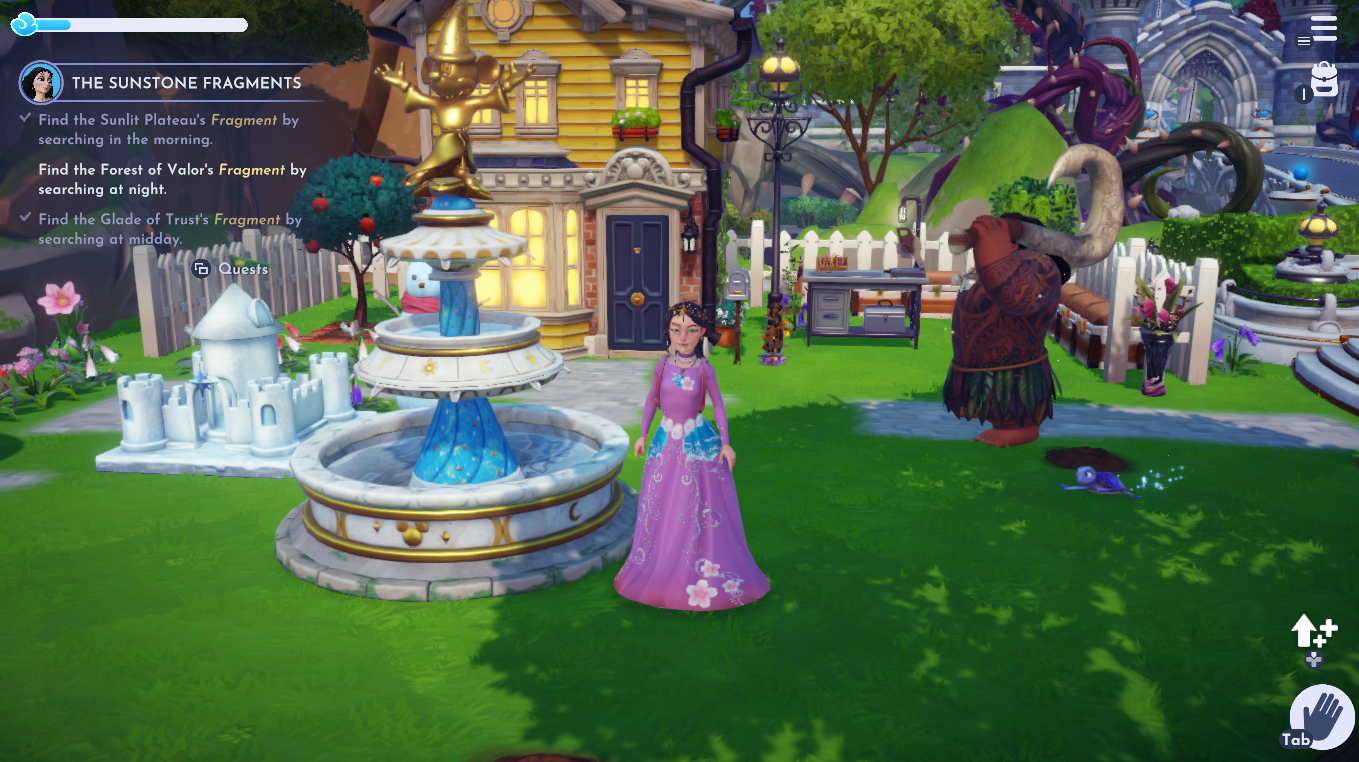 Next up, I ended up getting Maui to 10. Partially due to all that grinding for Tourmaline. What was very surprising about this quest is that it really had nothing to do with him at all. It was about restoring the Heart of Dreamlight Valley which honestly, I wish I could’ve just kept for my house, but I suppose it looks nice with the fountain in the Castle too.

One thing I forgot to mention yesterday were essentially the unvisitable houses– while the one in Sunlit Plateau isn’t too surprising with all those rocks in front of it (I really would’ve considered it just scenery if it wasn’t for the map icon), the one in Forgotten Lands is especially suspicious to me.

Alongside all the friending, I also had been leveling up. Most of the Thorn stuff isn’t really my thing, but I really loved this Fireplace. 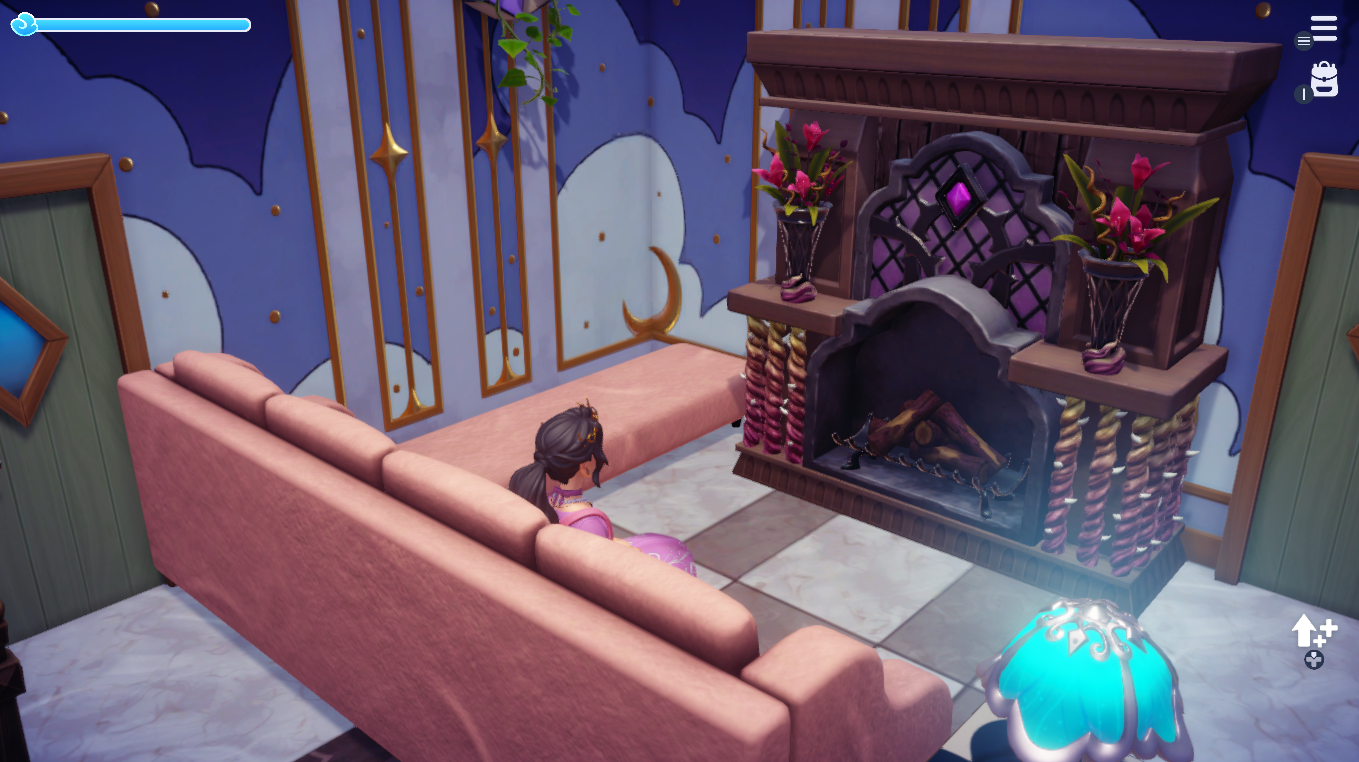 Moana’s quest ended with me needing to build something for the Leader Shards we’ve been finding and when she brought up the idea of these shards paired with Shells, I expected something a lot prettier. Apparently, it caused a new constellation to appear, but because the camera zoomed into a tree, I didn’t get to see it. We also got another commemorative photo that I am still really bad at taking.

Next up was Donald’s where I got to help build a fountain with actual flowing water!! Not sure why it’s also on fire though. 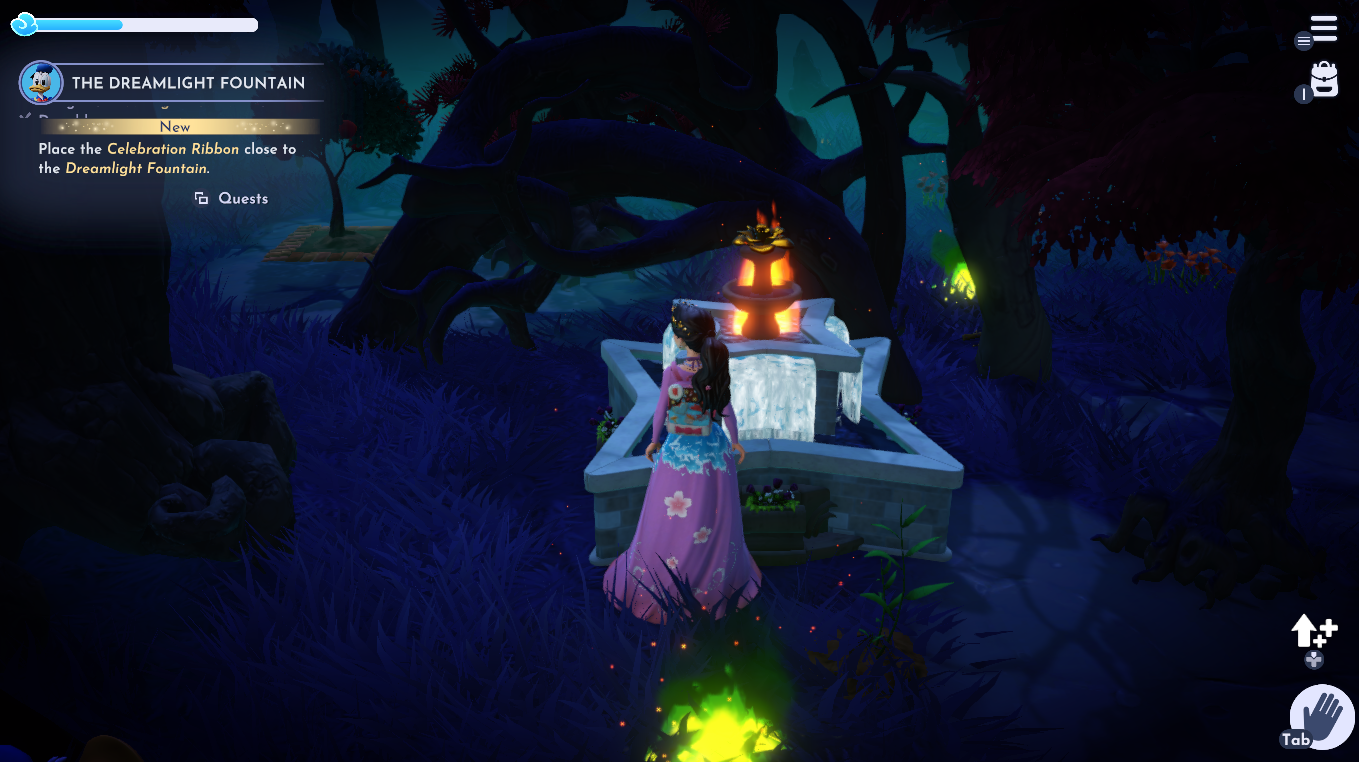 After the worst commemorative photo yet, because I placed the item facing the wrong way, I decided to bring the fountain back with me. I really wish the group photos were an auto set thing our character was just placed into over us having any control over it because I’m horrible at it.

I decided to work on Ursula’s next as hers was how we unlocked Eric. It also gave us the information on how her memories were kept intact.

I had to find three more crystals for the suspicious area I noticed in the Forgotten Lands. Of course, we ran into one small issue with the one in Sunlit Plateau being across the bridge. I ended up moving the well temporarily to access it. 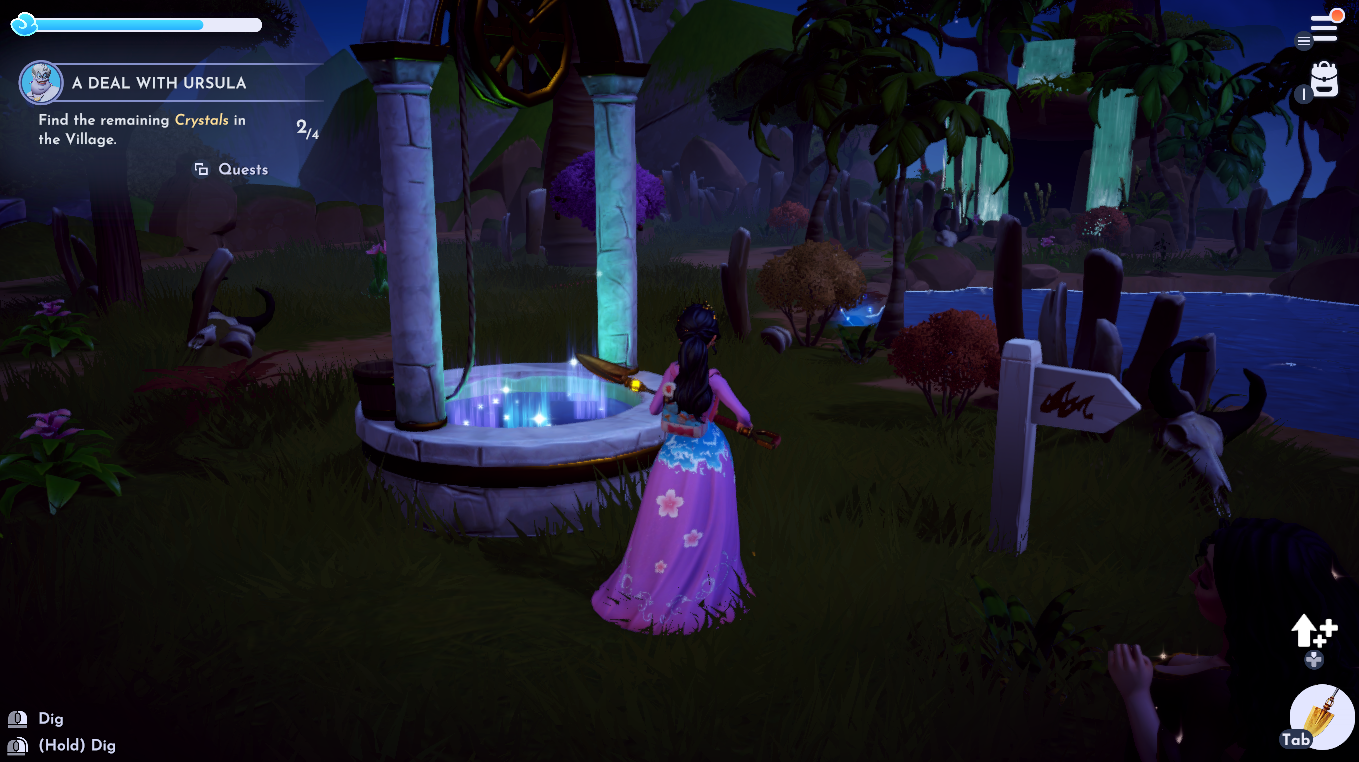 This is the end of Ursula’s questline, but it feels like there’s still a lot happening here. 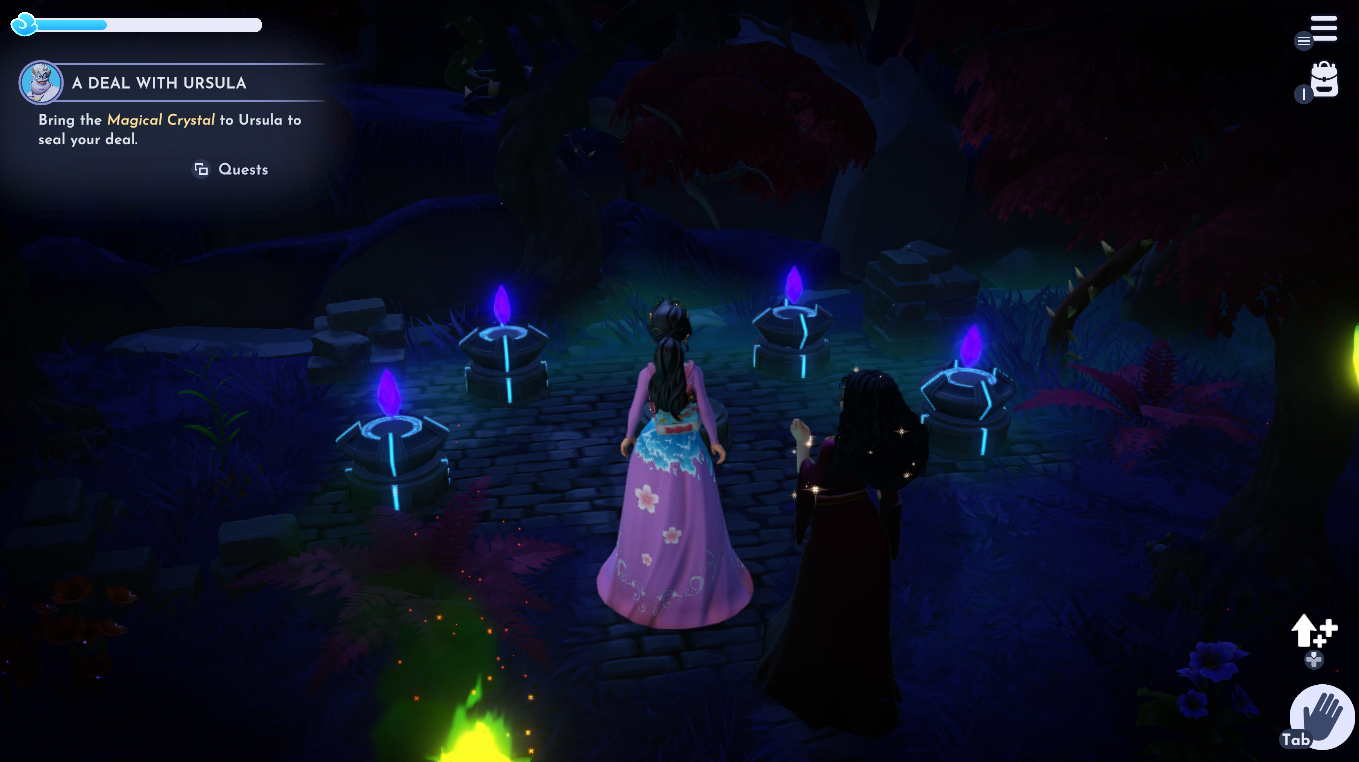 Regardless, we succeeded in getting Eric… after some trials of getting him to be a human again. I love his house and interior a lot– may be my favorite house layout so far. I want to combine his and Remy’s house and make them pink for my character’s house.

And with Eric’s questline, we finally made it so Ariel can walk on land or swim whenever she wants.

Eric still had one last questline for us before hitting another wall– one that further emphasized our place in the valley. I know some thought Mother Gothel was lying and Ariel just assumed with what we said, but I think Eric pretty much confirmed it.

I’m really excited about his new Blueprint station. I’m curious how often it’ll get new items. With that, Eric was added to the “needs to be level 10 to proceed” club.

Meanwhile, in the home-decorating section, Scrooge got in some nice new beds and while it was a hard decision between the Beauty and the Beast and Wreck-it Ralph one, I decided to go with the latter one for now. I also realized that by dropping food, you could then move it around, so I placed some around the Kitchen and Dining Room. Unfortunately, the cheese plate wouldn’t let me place it anywhere nice :(

To finish off, I did craft one new item I liked as I managed to get more diamonds. The Gazebo is really pretty.

Our goals for tomorrow:
-Getting Anna, Elsa, Ariel, Eric, and Scrooge up to level 10 and finishing all quests
-FINALLY CATCHING A FUGU T___T
-Hopefully figuring out the other recipes! I have less than 15 left.