Due to a very stubborn friend, I gave Genshin Impact another try July in last year, coinciding with Ayaka’s release that happened to be a few days after my birthday. Playing since then made two things very clear to me:
-The game is a million times more fun when you have a character who’s playstyle jives with you.
-When you’re still early on and learning everything, playing with a friend is such a godsend.

I’ve gotten to a point where I don’t necessarily need to play with someone to get through fights, though sometimes it’s still preferred to get through them faster, but generally if I need help, it’s with the exploration variety. Unfortunately, exploring is where Co-Op suffers a bit as while enemy drops are shared, forageables are not and anything you can find exploring in the world (Oculi, Chests, etc.) only counts for the host– not everyone who is playing together.

Regardless, we’re not here to talk about my general feelings of Genshin Impact, but rather its newest event: Fabulous Fungus Frenzy. The event involves you capturing Fungi with a “Wisdom Orb” to then use in Battle to win a Tournament alongside various new NPCs and a few familiar faces as well all while investigating the host of the event. The inspiration is definitely pretty obvious and with a new Pokemon game just four days away has the timing quite perfect.

While I played Pokemon Blue, collecting the cards, and watched the Pokemon Anime all at the same time, the message from the Anime was always what drew me in the most– not just “Gotta catch ’em all” and trying to finish my dex, but the idea of going on a journey and bonding with these Pokemon which is something that often falls flat in the games themselves.

There’s no miraculous thing that will cause a Pikachu to beat an Onix in the games with an electric attack, max happiness didn’t suddenly make my Pokemon suddenly power up to the extremes and be good enough for any Battle Tower-esque frustrations that suddenly required perfect IVs and specific stats and builds. Sure, type advantages weren’t necessarily the end of the world– I beat Onix with a very overleveled Charmeleon and a Caterpie back in Blue, but it made a difference and especially if your Pokemon was weak to what they were up against, they could go down very fast. There’s no real dodging or motivation to give to your Pokemon. It’s just Rock-Paper-Scissors expanded and hoping your stats are good enough.

And as someone who would get attached to specific Pokemon and desperately wanted to keep that Team together, it sucked to hit areas of the game that essentially said your Team wasn’t good enough because Pokemon Bonds didn’t matter, in the end, no matter what the Anime said. While I continue to play Pokemon games the way I want, as a completionist, this will never be something that doesn’t end up frustrating me.

But Genshin Impact’s Fabulous Fungus Frenzy event’s entire focus was on those Bonds. Sure, some attacks may have been better and each had their own attack styles, but you were forced to keep your special “Starter”, Bongo-Head*, in the party each time regardless of who else you wanted to fight. You essentially had an evil team, you had a rival, you had friends who even leant you their Fungi for the final battle, and while maybe the actual exploring was relatively small (beyond capturing each Fungi, everything was focused in one place), the focus on friendship and the bonds you made with these Fungi and how those bonds will power-through regardless is the one thing I’ve wanted from Pokemon all along. I was so scared maybe my Fungi wouldn’t be good enough, but no, the bonds were strong enough that we could win anyway. 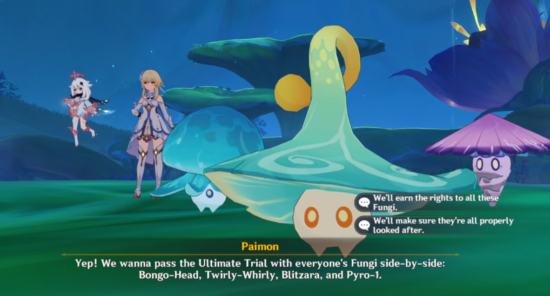 *Bongo-Head was named by Paimon and I’ll be honest, I hate that we did not get any input here unlike all the other Fungi. I get it’s because it was to be voiced and then they would have to voice three different names, but Bongo-Head deserves better. :(

While the Event ended somewhat bittersweet as our Fungi need to go away for now, the promise of seeing them again and future Tournaments in the future has me really excited… But also, why couldn’t I just have a cute Fungi Farm attached to my Teapot, Genshin??? Let me see them whenever!! Or at least be able to spawn them with the Wisdom Orb… 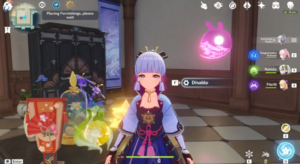 Despite my hopes, we had to have a Tearful Goodbye for now… 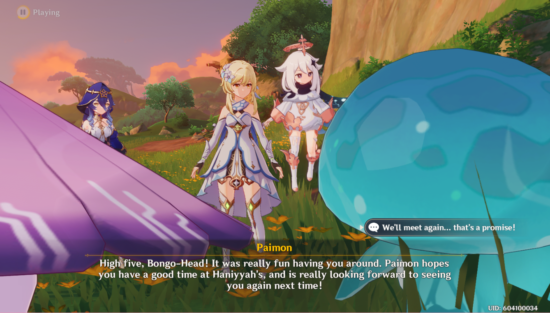 I’m hoping with Pokemon Violet having various new features from playing in whatever order you want to exploring with friends, maybe that bond of friendship can have some kind of focus, but I feel like as long as the game always puts a focus on IVs and EVs and making combat more convoluted with additional battle gimmicks, that message will unfortunately continue to only be part of the Anime instead.

If you do not play Genshin Impact and are curious about the Event, I have my entire playthrough of all six acts up on Youtube