So, today was a pretty exciting day! To kick off the morning was a fun Smash announcement of many things coming today or really soon. While some people leaked certain aspects, I feel it was still incredibly hyped up to actually see everything introduced. I especially enjoyed the introduction videos. Roy hitting Koopaling Roy out still amuses me.

Despite not being a big fan of Roy or Ryu, I was impressed with what they did with both characters. Roy definitely seems like an improvement (and different enough) and Ryu obviously had a lot of work put into him.

All the costumes look great, though, I don’t think any will replace the ones I’m using. Isabelle’s is a little odd, but I love that they made the party popper her “gun”–plus, Nintendo made such cute screenshots for it: 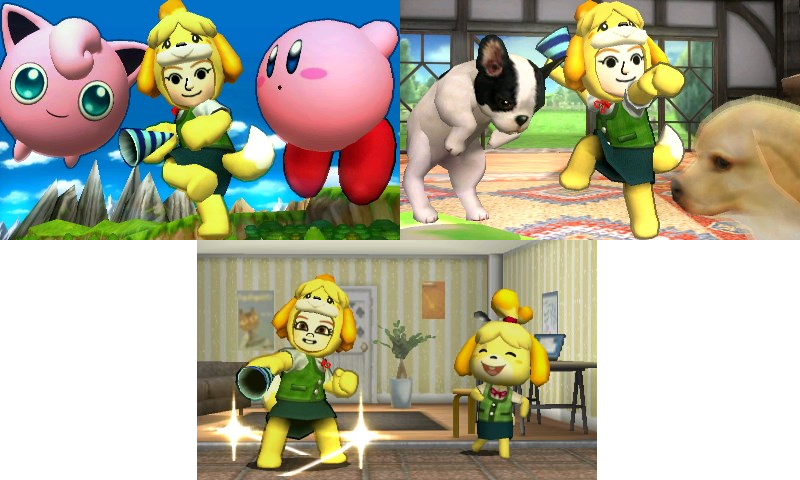 I also really like the stage Ryu comes with and was happy to see the Kirby Dreamland Stage back (now please bring back Fountain of Dreams). The big highlight for me though was everything involving Amiibo. For one, all DLC fighters have been confirmed to get Amiibo–I always figured this would be the case, but so many people seemed to think otherwise. Zero especially is quite happy as he wants Roy. Plus, all of this is available today! …Which would be great if I wasn’t here in California :P But I’m happy for those who have been able to buy/download the new DLC already. The really happy announcement, for me anyway, though was that Mii Fighters are getting Amiibo!:

While I am excited for all three, one complaint I noticed a lot is something I still need to agree with–why not have the ability for people to order custom ones? With all the parts being already known, it’d just be a matter of making the faces. I remember during an old Nintendo Minute, there was a contest to win a Mario Kart 8 3D Printed Sculpture of your Mii in a kart or on a Bike and that they would later be available to be bought. That is something I’ve been looking forward to and have been pretty disappointed that it seems to have not happened yet (if it ever is going to happen). I’d love something of my Mii (with the Peach suit) in the Prancer Kart with the Cloud Glider and Wooden Wheels.

Going back to the Mii Fighters though, it almost feels like a missed opportunity. I’ll still get them in hopes of customizing one day, but I think it’d be great if Nintendo ended up doing that. Moving on to the other Amiibo announced, it seems we’ll be getting them with our wave scheduled for the Fall. I’m not too interested in Falco, but I am pretty excited for these three: 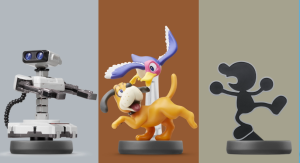 While I was mostly only planning to get the first two, we decided to get Mr. Game & Watch too after seeing all his poses: 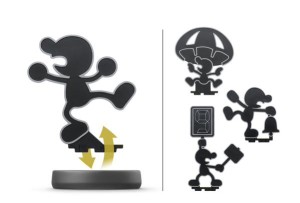 It’s just something really cool to do. Of course, he isn’t the only one with “variants”–R.O.B.’s appearance is different in Japan:

I really want to get both this one and the version for the other regions. I’ll probably customize the latter to the pink version, but I love the Famicom coloring and will be keeping that one as is. There were a few other Amiibo leaks after the announcement, but I’m sure they will be announced on the 16th so I will save those until then–short version is I want them all though.

Going back to stages, I’m super excited to see stages reappearing from the original game. I kind of wish Saffron City would come back too as I’d love to see another Pokemon stage beyond stadium, but seeing Hyrule Castle and Peach’s Castle back is really awesome. It makes me sad more stages may not be able to be added, but I hope maybe they will find a way to add more. The Miiverse Stage is also pretty cool and I love how the support messages work–though, I don’t know if they will manage to stay supportive. I think they will end up needing a lot of modding…

While I don’t expect to use the Tourneys mode much, it was nice to see it brought back up. It seems to be scehduled for August at the moment just like a lot of the Splatoon stuff. I feel like August is going to be pretty crazy. I am pretty excited for the Youtube functionality though–I have a few fun replays that I look forward to uploading to my Youtube channel. There’s no date for it yet, but I hope it manages to come out this year.

After that, we headed to Nokia Theater to line up for the Nintendo World Championships. We even got to see some E3 banners along the way: 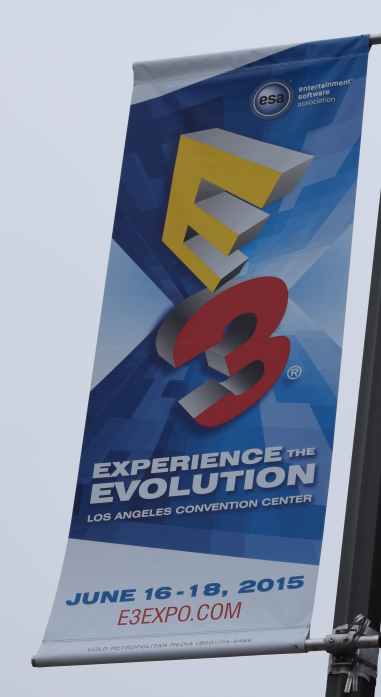 Despite getting there somewhat early, the line was already quite long and we were already around the corner from the theater… We did get to see how close the Los Angeles Convention Center is though!: 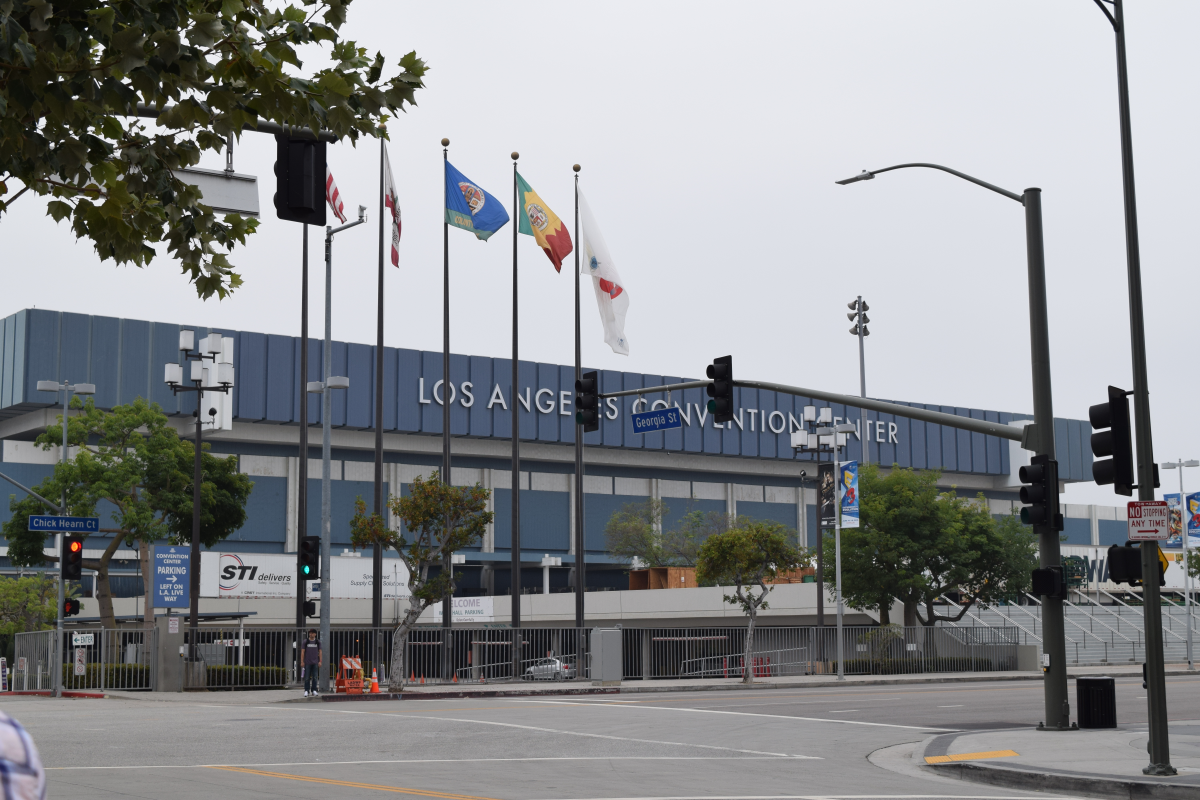 We’ll be picking up our passes there tomorrow.

Despite when we got in line, we ended up being mostly towards the early-middle if anything. The line grew a lot: 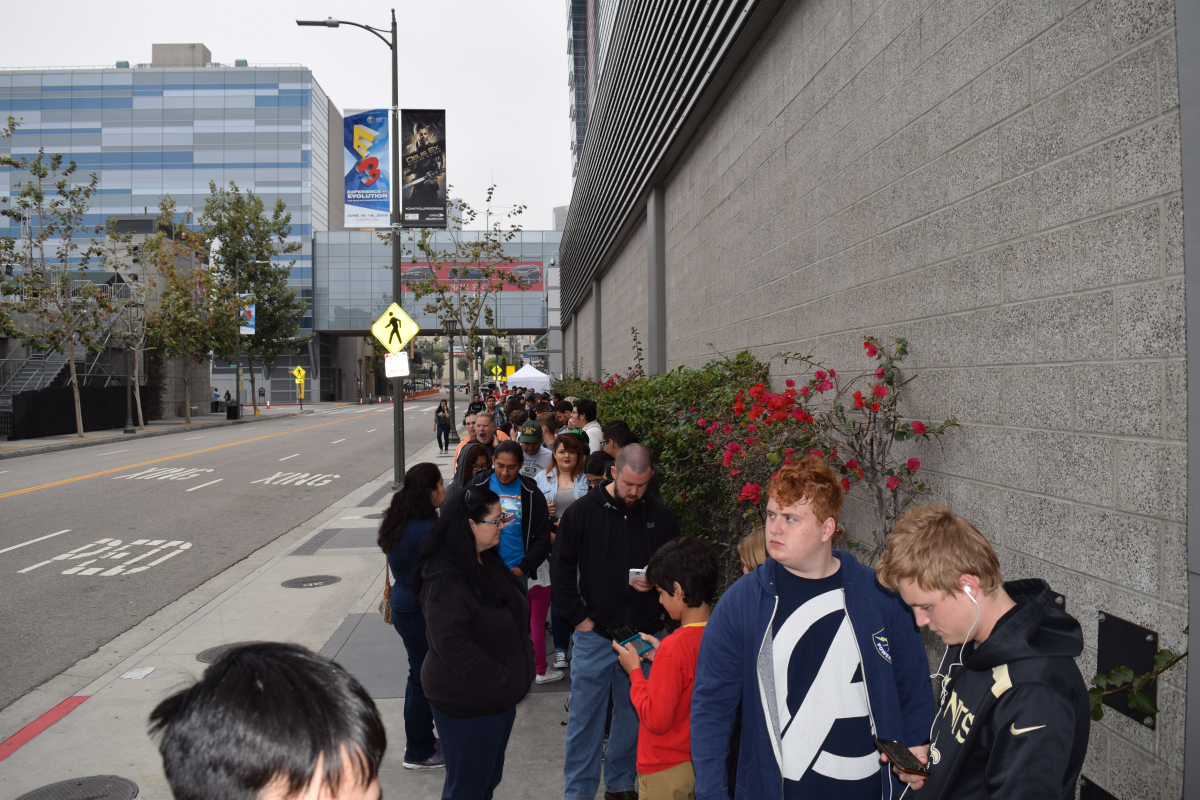 And there were quite a good amount of people in front of us: 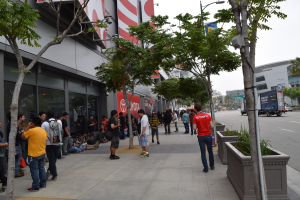 As for the front of the line, these people lined up the night before: 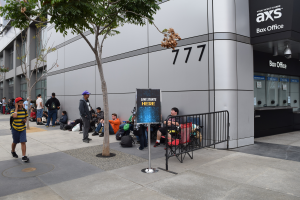 The person at the End of the Line had a sign in the same style.

In general, waiting on the line wasn’t too bad. People were nice, tons of StreetPasses, weather was good (cloudy with a breeze), and it was a nice time. Someone even set up all their Amiibo: 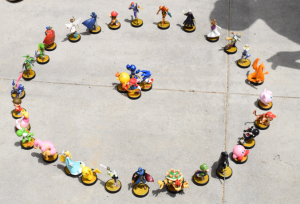 The only real issue was once the clouds parted and the Sun shown through–the temperature shot up very quickly and a nice relaxing time in line turned into hoping not to get completely sunburned. The delay in letting people in just made it a bit worse. They at least sold shirts though!: 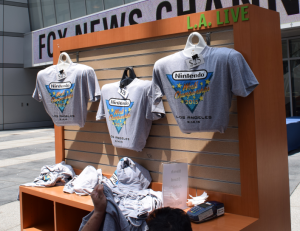 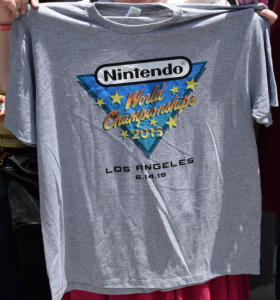 Regardless, it was a really fun time. I won’t talk to much about the actual Championship beyond a few highlights so if you haven’t watched it yet, I’d highly recommend doing so: 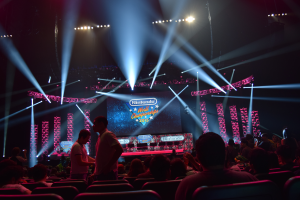 The lights gave the stage a really neat effect, but I could’ve lived without having them flashing me in the eyes every so often or the blinking near the end which caused a bit of a headache. 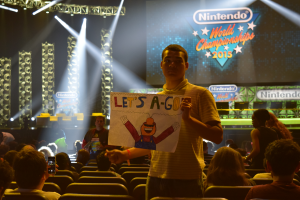 The 16 Contestants all had pretty cool black versions of the shirts with the logo and lettering in a shimmery gold: 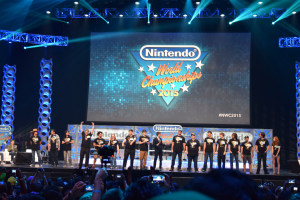 As for the events themselves, it was honestly all really exciting. Splatoon made me cringe at times due to seeing how many spots they didn’t ink, but besides that… :P We even received two new announcements with Earthbound Beginnings (Mother 1) and Blast Ball. I know some people were really hoping for Mother 3 over Mother 1, but there’s still a chance we could hear something on Wednesday.

There was also finally the match challenged last year during the Smash Brothers Tournament between Reggie and an awesome Jigglypuff player, Hungrybox: 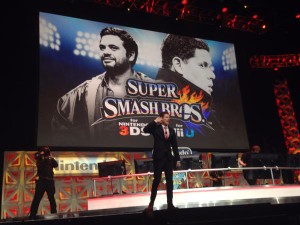 I will say the biggest thing that ended up getting me really excited though was the final round on Mario Maker. The levels were absolutely insane and both John and Cosmo did an amazing job. 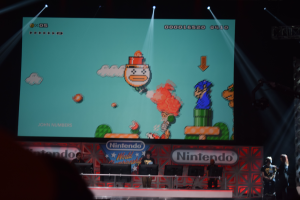 I think those levels would have made me cry. I’m kind of scared what levels the Treehouse may have put into the game, if any, after seeing these.

And the Champion trophy is pretty awesome:

Finally, I shall end this with the awesome Thank You screen:

Super Mario World is my favorite 2D Mario game to this day so seeing that picture made me really happy. I really hope Nintendo does the Championship again next year and continues with it rather than once every 25 years :P I was only one when the first Championship happened and after getting to experience this one, I just really want to see it back again.