So, today was the very first North American Splatfest! In the usual battle of Dogs vs Cats, I chose Dogs (though, I do also like cats) and battled my way to victory. I expected to be playing a long time, but managed to hit top rank after about 4 hours. I would say 4-5 hours is probably the average time most would need to play, ignoring things like disconnects.

Overall, I had a lot of fun with Splatfest. The Plaza looks amazing, the music is great, and it’s just generally a fun environment. Most of my issues with it were more of the inner mechanics such as:
1. No map switching. Even though you have three maps instead of the usual two, I missed the map switching. :( If Callie and Marie can pause from dancing and singing to give you announcements when you first load up, they could for new ones too! I’m not really sure why maps weren’t changing.

2. Wait times. It wasn’t the end of the world, but considering the delay/push-back of Splatfest was BECAUSE of wait times, the fact that I had waits more often than not of 40 seconds up to 2 minutes or so was kind of annoying.

3. But I’d honestly have rather waited over getting Same Team matches. I still haven’t heard of anyone having Cat vs Cat matches so it seems it may have just been an issue with the Dog team, but these were kind of disappointing as while you could still earn points towards your title and level experience, it still doesn’t add to your team which is the biggest point of Splatfest.

4. Many matches ended up just sorting in 1, 2, or 3 people instead of a full team of four. Those matches never ended well for the other team, although, I did win one match when I only had three.

5. Weird lag issues. I was disconnected from maps twice (once near the beginning and another right after they showed the results while I was waiting for the “Play again” option to come up) and had a lot of the inking but no ink is being placed. Or late kills which involve you somehow also getting killed and just it was really weird.

Despite these issues though, I really did have fun. And thus, I will end this with a lovely Team Dog commemorative picture: 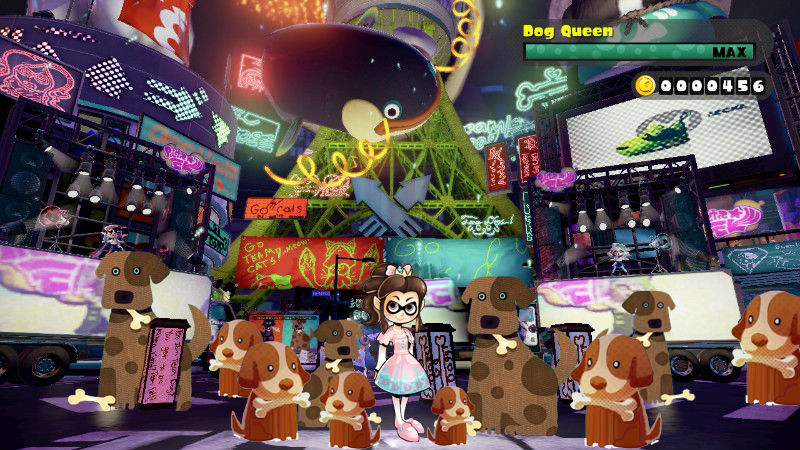 (Inkling!me by Apheros & you can find the original screenshot I took on Miiverse!)

You can also watch below (or go to my Youtube channel) for recordings of the the stream I did on my journey to become the Dog Queen!:


I hope to try and play a bit more later (though, I don’t think I’ll stream) to help support Team Dog some more! I’m very happy that I was also able to hit level 20 while getting to Dog Queen Rank and even had enough money to upgrade my usual attire to all have 3 slots! :) I think I’ll upgrade the School Girl Uniform next once we have some Sea Snails!

Edit for July 5th: The results are in! Team Dog has won! :D Yay! I’ve seen a lot of people upset with how the results went and made a post over on our site’s Tumblr talking about it and why there’s no reason to be this upset (except about the date). You can check out below for a video showing the results and getting our Super Sea Snails (I want a plushie of them)!