This time, I was on Team Water Slides(s)! 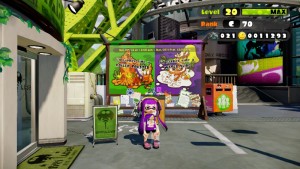 To be honest though, I really don’t care for Roller coasters or Water slides. The main reason Water Slides won is because if it’s one where I can pick my own speed or like a lazy river type of water slide, I like it while I hate like 99% of Roller coasters. In fact, the only one I’ve gone on where I wasn’t completely hysterical was the Runaway Train on Disney. And just barely.

I’m not really a fan of thrill rides, if you couldn’t tell :P Meanwhile, PAL regions have the much better theme of Eating vs Sleeping. I’d easily be on Team Eating as I feel sleep takes away from getting things done. I’d also be Team Milk Tea for Japan’s <3 Going back to the North American Splatfest, it seems I continue to be unlucky with dates. Yesterday was my birthday so I actually had a lot of things going on and thus, didn't get to play as long as I'd have liked! I did manage to hit Water Slide Queen though: 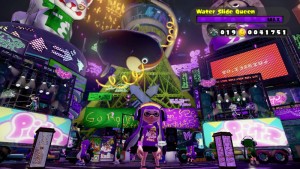 I even streamed it! Unfortunately, Water Slides lost by 4 points :( I was having horrible matches most of the time–wish I could’ve stayed playing longer when I finally got a good team. In general, I had a lot more uneven match-ups in this Splatfest–I don’t mean 4 vs 4 (though, I did have a few where Rollercoasters had less than 4 people), but that often it was one team constantly demolishing the other over it being pretty even or close. I had a lot more fun with Cats vs Dogs where it just felt a lot more even, even if the dog vs dog matches were annoying (I had no Water Slide vs Water Slide, but I heard some people did).

You can watch my journey of getting to Water Slide Queen over on Youtube. Below is the final part when I hit the rank!: