I don’t know if Splatfests are just becoming less fun as they go or if this one was just frustrating for a lot of people I know, but this Splatfest was the first that truly made me want to give up partway through. I did still manage to get Hot Dog Queen though: 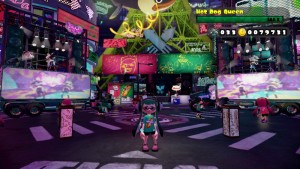 So yay for 18 more Sea Snails.

Before I go into what I felt was iffy about this Splatfest, I want to say I am not upset Hot Dogs lost–I honestly would’ve been very surprised if they didn’t. In fact, I was surprised we managed to have the higher win percent (and if we had 3 more win percent, we may have won over the large popularity vote for Marshmallows) as most of my battles just went… terribly. To make matters worse, disconnects were awful. If I finally found a group I worked well with and where I felt we actually had a chance to win or at least be close (as most matches weren’t close at all and were very one-sided–something I also blame the map choices for partially), after a few matches I was always disconnected at either the lobby or results screen. I don’t know why, but this is so incredibly disheartening and it wasn’t even happening to just me–it was happening to others I know as well.

Disconnects just managed to get even worse at night as, despite being Hot Dog Queen, my fiance and I were going to play some more for wins and every single time we got disconnected at either the lobby or within the first half of the match. I don’t know why, our internet was fine, and it happened out of nowhere, but after 10 match attempts that end in a disconnect somewhere, we ended up not playing anymore for the Splatfest. It was his only time to try for the day too and now he didn’t get to play at all.

I will say I wish Splatfests were in the morning again like with the very first one. I find Splatfest seems to work much better when it goes up and I’d rather not be asleep for the first part of it–I like waking up to it.

Besides that, I wonder how many people who added to the popularity Marshmallow vote picked it because they knew it’d be more popular. The fact that I keep seeing people just pick who they feel will be the winning team over which they like (My only temptation to Marshmallows was because that shirt was so cute) is just super disheartening. And honestly really silly for a difference of 6 Super Sea Snails. I still have 30. I don’t know who is managing to use up so many that they need to vote for what they feel is the popular one.

As usual, you can find my Queen journey on my Youtube channel. Due to some issues, I chose not to embed it–however, the highlight for me of Splatfest was that the pair used Victorian Tea Party colors and I do love Tea Parties.

Anyway, I hope the next Splatfest is better, but I don’t really find myself looking forward to it. :(