I haven’t written much in a while which is generally due to not having too much to say. Most of it is just sporadic excitement which is probably easier to follow on my twitter. That said, I’ve gotten a few questions on things and also wanted to talk about some of stuff I am excited for some more.

So, to kick it off–I’ll bring out the recently released game for the 3DS: LBX (Little Battlers Xperience). The game had caught my interest pretty early on–I had no idea what it was having never heard of the series in any form, but it looked neat. At E3, I got to see it even more and it actually looked pretty fun. I’ve been really wanting some new games to play (Why must you not release things during most of Summer, Nintendo? :( ) and while everywhere else was enjoying Woolly World we still have to wait for October so… Regardless, I figured I’d give it a try and honestly, I’ve been enjoying it.

I’m still having a bit of trouble with the combat, but the game itself is still a lot of fun. When not in a battle, the game actually reminds me a lot of Megaman Starforce–just with 3D models. Running around town, the random battles, the quest system… I really enjoyed the Starforce series and it was one of the first Megaman games I played so I had fun seeing the type of style again. The battles aren’t similar at all (though, that may be for the best) feeling much more free form.

The game features nearly full voice acting–pretty much all the cutscenes and several bits of the dialogue are voiced similar to the Professor Layton series–though, considering the game is by Level-5 that isn’t really surprising. :P I was shocked by just how much introduction there was right at the beginning:

The game follows the first season of the show and features the Japanese animation (as apparently the dubbed version actually did many cuts/edits). That said, the voices are the English cast–but I find them pretty good usually. I would say the only “annoying” parts are during battles where many of the people you fight have one of a few random ones even if it’s supposedly new people and some of those voices can be abit… ear-piercing.

My only real issue with the game though is I wish you could actually color parts. There’s so many parts and color schemes (and even some color variants for a few robots), but even with all the colors, very few match and it can make your robot look… really odd. That isn’t necessarily a bad thing, but I wish I had the option to both do something unique and make it look a bit more Uniform versus it being a mismatched bag of colors.

But yes, I’ve uploaded a few videos so far and plan to continue to do so. If it looks interesting, definitely give it a shot! Even though it’s a port from the PSP, it actually had a lot of new stuff too so I think even if you enjoyed that version, you could have fun with this one as well. I also want to thank the nice people who commented with information about the series :) It’s really made me want to check it out when I have time.

While I am enjoying LBX, I’d be lying if I didn’t say there are some games I’m looking forward to even more coming up in only about a month now! It’s hard to believe Happy Home Designer is only a month away. I’ve been watching a lot of Japanese footage to keep up to date on things, but unlike how I usually play Animal Crossing games, I don’t really have much planned out. I have an idea on what buildings I want for Main Street and what kind of outfit I want to have in the long run: 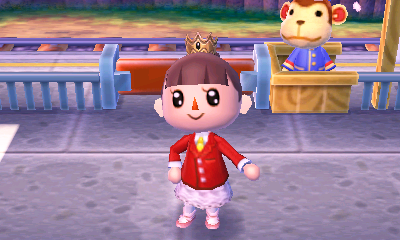 I’ve also been slowly working on turning patterns back into QR codes and even making some new ones:

I can’t even decide what I’m most excited about it. I’ve already spoken about it a few times so I won’t go on another ramble, but I can’t wait and there aren’t enough words for how much I’m looking forward to playing it. Also still hoping to be able to get at least one box of cards! It’ll be 6 cards per pack and each pack costs about $6 so it’s like $1 a card which isn’t too bad :3

Of course, that isn’t the only game coming out in September! Super Mario Maker is as well–I do have the game preordered, but I’m not sure how much I will play it in comparison to Happy Home Designer. I am a bit sad that it seems the Modern 8-Bit Mario Amiibo will be, at least for a while, exclusive to a Wii U bundle. As I already have a Wii U, I don’t really need the bundle… I just wish this would stop happening considering other regions are getting it by themselves. I loved the Modern more than the Classic (though, both are great) so I’m just super sad it may be a while before I can get one… (at least at a not overpriced amount).

That wasn’t the only Amiibo news though, Woolly World announced that in addition to the 3 Woolly Yoshi’s, there will also be a Mega Woolly World Yoshi Amiibo: 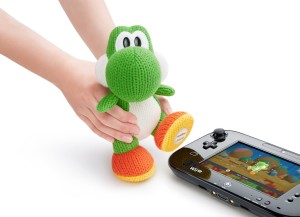 I’m pretty sure I need it. It’s a fair size bigger than the normal sized ones: 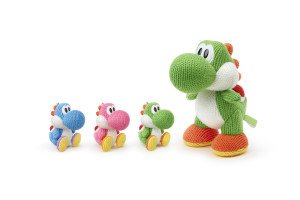 And one of the big things that have been popping up is people discussing if it’s overpriced or not and to be honest, I’m not really sure. Offhand, I don’t really think it is. But when I compare it to my lifesized Kirby plush that was $50, well…: 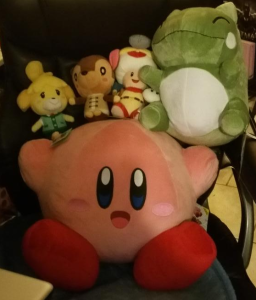 Regardless, I think I’ll probably end up getting it. But I hope that this is a one-time thing–I wouldn’t want to see many other “Jumbo” versions of things. 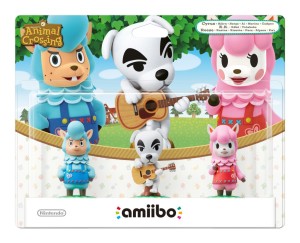 Meanwhile, Lottie, Nook, and Mabel will be sold separately. While I plan to get all of them, I know K.K. is pretty popular and was one of the ones that people wanted by itself. I’m just kind of tired of seeing the 3-packs in a way :( I hope I will be able to get all of them though… As it is, Amiibo Festival is supposed to be free from the eShop… and yet Isabelle and Digby will only be shown with the bundle… You also get 3 cards, but going with the $1 per card and $13 per Amiibo, that’s only about $30. The fact that we have to pay another $30 is… really disappointing. I mean, I prefer physical releases anyway, but if the game really is free on the eShop (over $30), I can’t help but feel a bit disappointed.

Going back to happier topics, on November 20th, Pokemon Super Mystery Dungeon comes out! I hope I can find lots of time to play it between Thanksgiving and wedding stuff… I know I’ll probably play it a lot during the reception at least.

I also want to bring up Style Savvy 3–while we are still waiting for a release date here in the US, Europe has recently announced that the game will come out for them November 20th which is a huge surprise. I really hope we hear about Style Savvy 3 in the US soon–hopefully in October (as November is busy enough). I’m not sure how I’d be able to decide what to play if it and Pokemon Super Mystery Dungeon came out the same day… At the very least, if Europe is getting it, my hopes for the US getting it soon are hopeful. But part of me fears we may not get it until 2016 which is a bit disappointing :(

And just to finish this entry off, the latest Splatfest will be happening this upcoming Saturday! It’s the first North American sponsored one and it’s for Transformers. I don’t really care much for Transformers personally, but I am looking forward to what other sponsored Splatfests could happen in the future. As for who I voted for, well…

(I voted for Autobots :P)

(On a final note, while I don’t want to completely buy into the Professor Layton in Smash rumors, no matter how likely due to reasons, I’m pretty excited at the thought. )