Or if you don’t celebrate it, a nice day overall :) My Christmas and Christmas Eve were fairly busy–we celebrate the Feast of the Seven Fishes which meant… a lot of cooking. And because some members of my family argue on whether shellfish count towards the seven or not, we had quite a lot of fish.

I ended up making Salmon, Halibut, Red Snapper, Catfish, Flounder, Mahi-mahi, Chilean Sea Bass, Tuna Steaks, Scallops, and shrimp while my mother made some baked clams and sole stuffed with crab meat. We are going to be eating fish for quite a while.

If that wasn’t enough, I also baked some chocolate chip cookies and some white chocolate cranberry cookies (Santa needs his cookies afterall) and I still have two things left to bake (which I will most likely be doing later today)–Toffee Pudding Cake and Hot Chocolate Brownies. I’m actually not doing too great health-wise in the sense that I’m supposed to be taking it easy/destressing, yet I still constantly end up giving myself stuff to do and just need to lay down and relax more. With Christmas over and just two things left to bake, hopefully I actually will start to relax a bit finally, but if updates are a bit slow, that’s why! As it is, grinding is still a huge pain in SMD unfortunately as I’d love to get that finished.

Moving onto Christmas Day, I did get a few games for Christmas–two DS games I’ve wanted for a long time, a PS4 game, and a 3DS game. I’ll start with the DS ones. First up is Cookie Shop which has both a misleading name and misleading boxart: 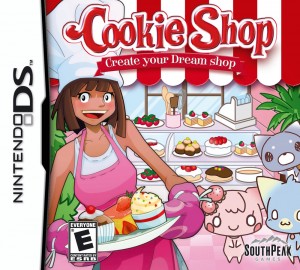 I actually knew something about it was misleading, but it was still cute and you owned a bakery so I left it on. I just didn’t realize how much. For one, you do not play as a human–there aren’t even humans in the game. You see that cute pink character next to her? This one?: 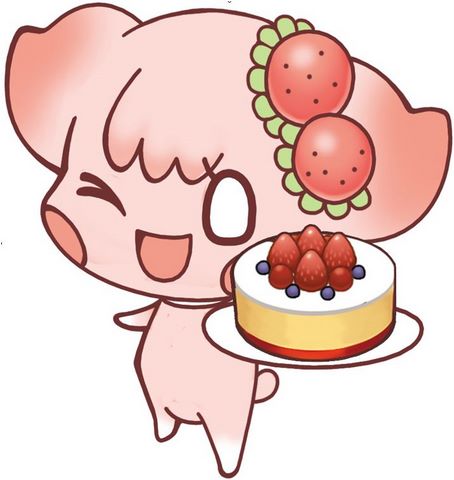 Yeah, that’s the main character–her name is Rose and that is who you play as. She wants to own the best Cake Shop (yes, cake shop–you do make all kinds of things, though, it is a bakery, but the emphasis is on cake) in the department store.

It’s a cute game and my biggest issue with it is mostly that it’s very slow. You can do very little per day (and I can’t think of any game where I felt I did so little–the closest is the Pokemon Mystery Dungeon games due to one dungeon per day, but I can at least go and talk to everyone and dungeons aren’t always quick) and it makes it kind of boring which is really disappointing as it’s adorable and I do want to play it more.

Besides that, I finally got the first game that has been on the backlog for ages–Crafting Mama. I really adore the Cooking Mama series for the most part. It’s one of the few motion control focused/stylus-focused games I play (though, it still hurts after a while) and I just always have a good time with them. The only one I didn’t enjoy too much was Gardening Mama (gardening isn’t really my thing). I can’t say much about Babysitting Mama or Camping Mama though as I never tried either personally. I’d be interested in possibly getting the latter though.

I love arts and crafts and making things and it’s something I really wish I could do in real life. Unfortunately, Home Economics ended when I entered high school and nobody in my family happens to be rather crafty which has kind of left me out of luck. I don’t really learn well from images or videos and really need to learn things in person which makes it hard, but I’d like to get better with things at some point. Unfortunately, Crafting Mama also isn’t a great learning experience as while it does show some things, it’s definitely not completely realistic :P And so it still wouldn’t help much.

Going onto the non-DS games, I got the Gravity Falls 3DS game (Legend of the GNOME GEMULETS) which I am pretty excited to play soon and Tearaway for the PS4. I actually have Tearaway for the PS Vita but I… am not very fond of the Vita. I have a lot of issues playing it and so I never managed to finish Tearaway which made me sad as the game is very cute so I’m pretty happy that it is available for the PS4 and of the new games I received, it’s probably the one that will most likely get a full series up on my Youtube account.

Moving on to non-game gifts, besides some clothes, I got the cute Sphero BB-8 which I adore. It’s a bit smaller than I expected, but it’s still super adorable. I just wish there was a “Come home” option so it could go back to the bluetooth source rather than having to search for it while it’s off patrolling :P

I also received a pretty cool sorbet/fruit soft-serve maker, a mini cupcake maker, a box of chocolates, and a cute Snowman Squishable so it was a nice Christmas–especially considering I was expecting like 2 things. It made some of the frustrating drama that has happened these last few days a bit less existent.

But yes, it’s pretty late so I should probably head off to bed–if I don’t make another entry before January, I hope everyone has a good rest of December and a Happy New Year (and New Year’s Eve)! :)