That is a question I hear a lot whenever I mention how battling is my least favorite part of Pokemon. With the recent showing of footage of Pokemon GO (which you can watch below if you haven’t yet), there have been people who have expressed disappointment in not being able to Battle a Pokemon to catch them.

But for me, I am completely okay with that. I don’t really like battling at all and so being able to just catch the Pokemon is a lot more fun for me.

Contrary to belief, Battling isn’t the only thing to do in Pokemon. It’s a prominent thing (and the thing that is often stuck as being the only thing in Post game :/), but not the only thing. Besides getting various minigame type activities in each generation, the main reason Pokemon got my attention was the idea of going on a journey with friends I made and doing everything together. It’s that same reason that seeing ribbons exclusive to some number min-maxing post-game disappoints me greatly because I feel Pokemon is much more than that.

People can say “Why do you play if you don’t like battling?”, but I can also say “Why do you play if you only like battling?” If you’re only doing it to number crunch and keep breeding and catching and whatever it is you’re doing just to get this one perfect one and toss them to the side, with how I play Pokemon, I feel that is completely missing the point.

People play Pokemon for different reasons, but it’s only the people who play without caring much for the battle portion that really get the short end of the stick in things.

Going back to the Pokemon GO footage, as I mentioned on Twitter, the things that caught my eye were the trainers and the mention of “Crystals”. At the very least, there is some kind of customization: 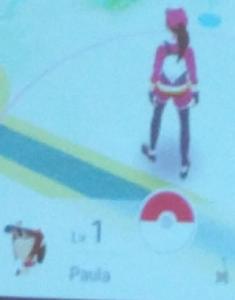 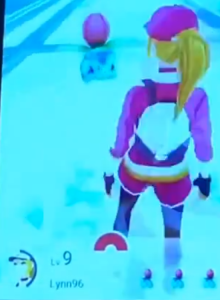 Which is something I’m always excited about.

Crystals, on the otherhand, are most likely some kind of currency in the game. Whether they will be replacing Pokedollars or be a separate currency, I’m not 100% sure. And while some people are complaining about Microtransactions, those were kind of a given when they announced a mobile game so… What I’m hoping is Pokemon has learned from Pokemon Picross, Pokemon Shuffle, and Pokemon Rumble World and will offer an option for people to “purchase” the game (or spend a certain amount to do so) and be able to use all pay features for free. As this game is in collaboration with Niantic Labs, I’m not sure if that will or not, but I’m crossing my fingers.

Finally, one other thing shown that caught my eye was this… 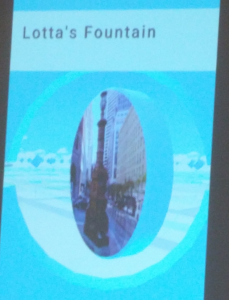 This is a fountain in San Francisco (which is also where Worlds will be this year). Will it grant something special? Maybe. At the very least, if my Worlds plans are still going well and GO is out by then, I’ll have to make a stop by :P