So, the game was actually down most of today which was more than a bit frustrating. On the way to Manhattan for some cupcakes for my birthday (which is tomorrow at the time of me writing this), it finally started working once we got into the city. I wish it worked a bit sooner to have had it longer, but I’m just happy it started working while I was out.

Besides stopping at a bunch of Pokestops (I even got the medal for 100 Pokestops!), I managed to catch a few new Pokemon–Clefairy (FINALLY), Voltorb, and Magnemite! The Magnemite was almost missed actually because it spawned pretty far away, but I usually have the game pretty zoomed out so I was still able to grab it!

Sadly, I did not see another Tentacruel :( One of my eggs hatched though–a Pidgey. :/ I guess if Megas end up a thing, however, I could probably use another Pidgeot at least…

I also managed to get another Eevee which let me finally evolve one and using the name trick (Nicknaming the Eevee Rainer for Vaporeon, Pyro for Flareon, or Sparky for Jolteon. It will only work once per evolution so you can’t name two Eevee Rainer and get two Vaporeon–only one is guaranteed), I got a Vaporeon! I changed its name to Kasumi :3 I’ll probably be evolving the one into Flareon next followed by the one into Jolteon.

On a weird note, while back at home, I ended up having the same glitch I had with the Tentacruel with a Tauros–just with the arrows on the right instead of the left: 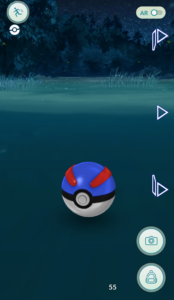 Plus, the catch was successful unlike with the Tentacruel where it failed. With Tentacruel, I closed and reopened the app, while with Tauros I hit the run button (since I had already caught one, I wasn’t going to be as upset if it failed). Nothing else works besides the run button or closing it out, but I’m still not sure what causes it.

Another egg hatched and thankfully a new Pokemon–Machop! :D Yay~

The day started off with two eggs hatching!! I got a Geodude (:D) and another Pidgey (:(). Hoping the other 6 eggs will hatch sometime today as well!

Upon getting back up after sleeping, the app was having its usual log-in issues, but a quick restart of it actually fixed it and it seems to be good now, thankfully. I also hatched another egg–just a Bellsprout though.

My next egg that hatched was another Pikachu. So far, I’ve gotten all 3 of my Pikachu this way. This also gave me the Pikachu Fan medal.

Despite some server issues, thankfully everything was more or less good by the time we left and best of all, the restaurant we had my birthday dinner at was a Pokestop!! I got lots more eggs and one egg did hatch, but I honestly have no idea what it was as it seems it hatched around one of the freezings and bleh. It doesn’t look like it was new though.

I did manage to get a Slowpoke however and finally was able to evolve a Spearow into Fearow. We saw lots of shadows for Pokemon we didn’t have yet, but sadly no others showed up after Slowpoke :( Still gonna cross my fingers for good stuff in eggs though.

And my next egg was pretty nice–it was an Abra! :D Yay! And I hit level 15! Unfortunately, the egg after it was a Zubat… But my 10KM Egg was a Magmar! And that was it for the night. Looking forward to more eggs hatching tomorrow.

Anyway, while not exactly Pokemon GO related, I did want to share this lovely gift that TadBitDiGital drew for my birthday :D As it IS Pokemon related: 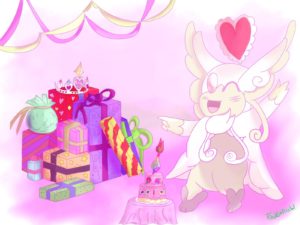 And also this lovely gift that Cheesey did for my birthday as well :D Also Pokemon related!: 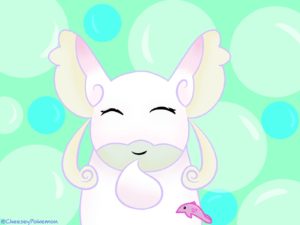 Besides more server issues earlier, not much happened today. My 2KM egg hatched into a Pidgey :/ Acording to Serebii’s site, I already have all the different Pokemon I get from 2KM eggs. Spearow, Weedle, and Pidgey are the ones I’d want the least though as I have all the evolutions for them already. Technically Zubat too, but I am saving in advance for Crobat… Honestly, Magikarp would be helpful though just due to how many are needed to evolve one…

For 5KM eggs, I still need, at the time of writing this anyway, a Diglett, Growlithe, Ponyta, Farfetch’d, Seel, Grimer, Drowzee, Cubone, Lickitung, Kangaskhan, and Porygon. Farfetch’d and Kangaskhan are the priorities there due to being region exclusive and thus, there isn’t any other way to get them until Global Trading happens or I can afford to travel to Australia for the first time and Asia again.

For 10KM, I still need Onix, Hitmonchan, Chansey, Mr. Mime, Jynx, Electabuzz, Lapras, Omanyte, Kabuto, Aerodactyl, and Snorlax. While Chansey and Lapras are the ones I’d want most, Mr. Mime is also priority due to also being a region exclusive.

I just hope I get more eggs soon I guess. And can start finding more Pokemon I need… One thing I need to try and stop doing is transferring Pokemon I don’t need so quickly. I really need to level up faster ._. But I also care more about completing my Pokedex over getting my level up.

Another egg hatched–a Weedle :( I feel so unlucky with these eggs… The last three are all 5KM though so keeping my fingers crossed for something new.

Sadly, the game was down for nearly the rest of the day and so nothing else really happened. I did hatch another egg… but a Bellsprout :( 2 5KM eggs left.

My next egg was a Sandshrew. It gave me a lot of candy at least, but… Also, I’ve gotten so many Doduo at this point, I got the Gold Normal medal: 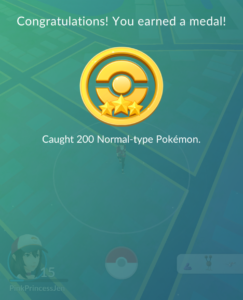 I CAUGHT A WIGGLYTUFF :D So happy I got something new today…

Despite occasional issues, the app seems to be doing pretty well today. My final egg hatched, but just a Tentacool. I suppose it helps me get Tentacruel though at least.

Unfortunately, now that I’m out of eggs there most likely won’t be any updates unless another surprise like Wigglytuff happens. We’re in a heat Advisory and air advisory until Saturday evening and thus, I can’t go out again unfortunately :(

As expected, nothing really happened yesterday beyond taunting nearbys I couldn’t find.

Today though, I got to go out for a bit so at least I got some Pokestops… Unfortunately, I still had issues with Pokeballs and item space and I really hate how all of that works. I got two eggs, but that’s really it for today :( I hope they hatch into something good–both are 5km.

I don’t expect them to hatch today though, so I’ll end the entry here. If something surprisingly does happen or one hatches, I’ll edit the post then.