So, to my surprise, the big Miitomo update came out today. I wasn’t expecting it out until December, but honestly, this was such a good thing to receive as it’s helped me really clear my mind tonight which I needed. For those unaware of the update, it is a huge update that is required to even play and adds tons of new features such as:
-The ability to send private messages to friends
-The ability to customize the wallpaper and flooring of your room along with adding posters.
-A new Style thingy where you can see various people’s outfits that you can favorite and even purchase items from (Except for Miitomo Drop/special event ones)

And it’s just a really good update. There are also login bonuses for the first week of the update along with various Collaboration Miitomo Drops making a return and special Wallpaper and Flooring you can get right now just for playing and trying the new features.

That said, I do have some issues with it. Such as the fact that wallpapers and flooring change daily and are only through Miitomo Drop. I’ve already explained in the past how the daily feature sucks without the incentive of still being able to get things later (due to it becoming part of your shop’s inventory) like Tomodachi Life and making Interior Design both exclusive to the Daily system AND a Miitomo Drop is pretty frustrating. While it’s only 4 different ones per drop, it’s still pretty frustrating and I used up about half of my saved up tickets just to get the flooring and wallpaper I wanted most (And still haven’t managed to get the other flooring and wallpaper I really wanted). Despite it seeming like you can only use coins from the banner, you can use tickets for it as well.

One of the nice new additions with Miitomo Drop is you can now immediately pick Candy as an option if you win an item you don’t want rather than it requiring you to have at least one color of the item before you can choose candy.

Another odd and somewhat frustrating choice is that all rooms are now reset to a default green wallpaper and flooring. I think either letting people pick a simple plain color for wallpaper and flooring and/or letting people keep what they had before would’ve been a lot nicer. Many people did like that they had and having to re-earn it really stinks. Similarly, while each personality type had a bit of a unique furniture selection before, now everyone has the exact same things–some plants, a desk, a bookshelf, and some pillows. They don’t do anything. You can’t customize them in any way (there is no furniture at all–hopefully that might change in the future)… The only customization besides the wallpaper and flooring comes in the form of posters. You receive one poster slot free which lets you put a poster in 1 or 8 different areas of the room. 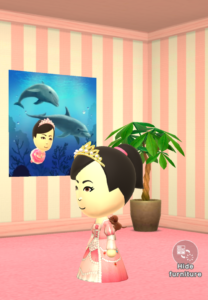 You can use an existing Miifoto, make a Miifoto just for the poster on the spot, or use a photo saved on your device. You can even use transparent pictures.

Unfortunately, while the first poster slot is free, every other spot costs 99 cents to unlock so it’s about $7 to unlock all 8. While I was happy with one or two at first, I ended up eventually unlocking them all once I realized that they show up behind the comments on your questions which just makes it look super pretty: 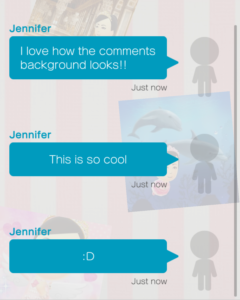 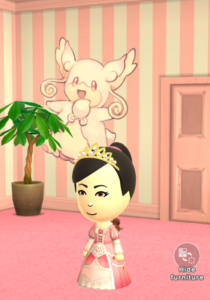 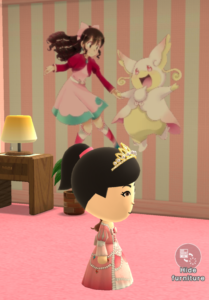 I did have issues with some posters though, such as this Miifoto which came out super Saturated. 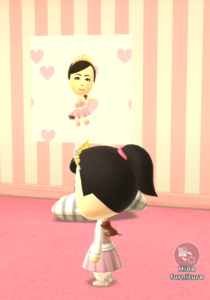 It ended up looking fine in a different position though: 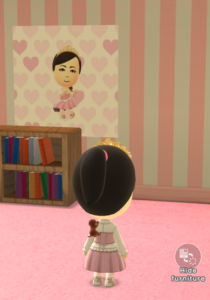 And there was no issue with a different picture I put up in its old place: 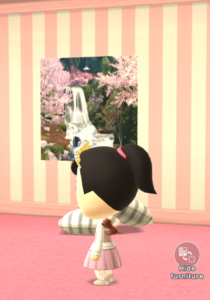 Moving on, while I don’t believe this is new, I ended up noticing there is actually a Tuck in or out outfit so yay for more outfit combos: 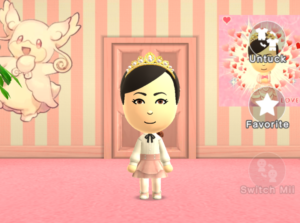 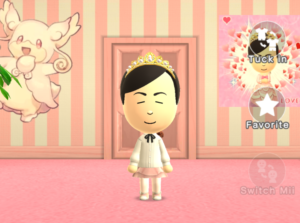 Finally, heading over to New Leaf, as most of you may know, I’ve been trying to get my date back to normal. It’s been going pretty poorly and I only finally hit June today… of 2015 still. I’ve gotten about 2 months along so far and hopefully I can start picking the pace up a bit. Regardless, I ended up hitting the anniversary of my town (even if it is technically a year behind) and a new Special Event triggered. It’s really cute, though, I had gotten my hopes up for all 10 of my Villagers showing up due to Isabelle’s dialogue when it wasn’t even close to that… Not to mention a random special villager seems to show up as well (besides Isabelle :P) which also caught me off-guard. Despite those issues, it’s genuinely a very cute event: And the item you get is absolutely adorable: I’m looking forward to see if there are any differences when I end up triggering it again as I make my way to November 2016.