So, Mark and I were able to check out the Nintendo Switch this afternoon (Saturday afternoon incase I end up not publishing this until Sunday :P) and while we didn’t really record too much (The one requirement is we needed to try and record hands in the shot which wasn’t always easy–especially if we were both playing), I still have a lot to talk about and a good amount of pictures too.

We managed to get there over an hour early, but a good amount of the line had already been formed. We were at least close to the front. It had started to snow quite a bit so I’m glad they let us in a bit early just to wait somewhere warm. Upon getting up the stairs, we were greeted by a really awesome Link statue: 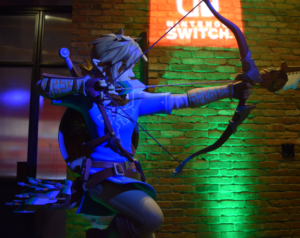 First stop for us was right to Breath of the Wild. We couldn’t afford to go to E3 last year (though, even if we could I think it still would have been our first stop) so my husband has been dying to play it for so many reasons so of course I let him go for it.

There was a line throughout the entire event so I’m glad we got into the first group of people who were able to play.

Right next to it was Snipperclips so that was the next game we ended up playing. It really is so much fun and I wish we were able to play more before the demo ended.

I look forward to playing it in March–it’s definitely going to be a game we get pretty quickly if not at launch.

We then headed back towards the entrance to play Super Bomberman R. Having never played the classic Bomberman, I was so incredibly surprised I actually managed to win most of the rounds. I don’t think the other people we played against were too happy about it though. It really was a lot of fun though and while I think I still prefer the kind of battlefields the N64 version had, I definitely want to pick this game up soon at some point.

There were a few display set-ups showing the Switch as well: 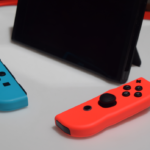 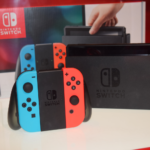 This is really the only time we got to see the Joy-cons connected to the Grip though. We never actually got to play with it like that in the games we tried.

Mario Kart 8 Deluxe was next up and just, before I get into it, I want to just talk about the various set-ups they had. When they did something like this for the Wii U, it was mostly very sleek–everything was white and blue and it was generally smaller, but this place was so much bigger and just had all kinds of cool things set up. 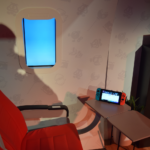 The window is actually a video screen and clouds would float by. It was so cool. You could try Mario Kart 8 Deluxe here tabletop. 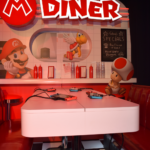 Probably one of my favorite set-ups. I just found it so cool. 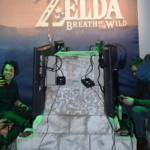 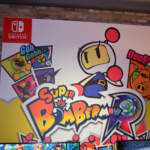 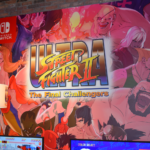 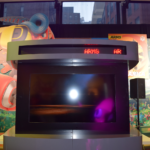 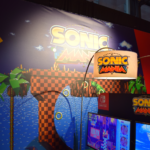 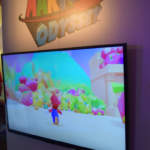 Super Mario Odyssey wasn’t available to play, but they did have this video set up and even a photo op you could take with Mario and his hat. 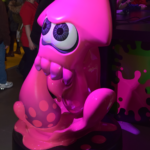 I loved these so so so much. I kind of wish the Diner was actually serving special Mario-themed things just because it felt so authentic that I felt like it should have been, but it was just such a good display. Getting back onto the topic of Mario Kart 8, it’s SO nice to have a proper battle mode again. I was absolutely terrible at Bomb Rush because my aim continues to suck, but I still had fun. The game also easily runs a lot smoother. That said, I don’t personally feel it’s enough for me to want to rebuy the game and have to unlock everything again. I also just want to point out while I actually was okay with just using one Joy-con for Snipperclips, I actually found it pretty painful after a while in Mario Kart.

Next up was Street Fighter and before I get into the game itself, I just… want to talk about this a bit. So, most of the time my husband and I played together. I generally do not enjoy playing against people I don’t know for a lot of reasons unless I am also playing with someone I do know. Regardless, this guy wanted to play with someone so I ended up going up against him and just… do not assume and be a condescending jerk like this guy was. I picked Chun-Li and her color immediately and then he kept telling me how to choose my character and what button did what as if I’ve never played Street Fighter before, let alone a fighting game. I didn’t ask nor do I believe anything I said even came off that way. I’m pretty sure I even said I played the game before when the Nintendo Rep asked and the guy was already there at this point.

The reason the game didn’t continue? Because he actually hadn’t hit submit on his color not realizing the option was there. He just assumed that me, this girl in a cute sweater dress with a pink bag had no idea what I was doing and that it was my fault. And his response when he realized? “oops, it was me”. No apologies. No anything. So let me just say it was incredibly relieving to end up winning the match overall.

I did lose the first round (though, it was very close–it was down to one more hit on both sides), but won the next two even if the third it seemed he really wanted to be cheap with the projectiles. I don’t think he was happy that he was beaten by a girl who he essentially acted like she had never seen a game in her life. Just don’t act like this. If someone asks for help, that’s one thing, but don’t make all these assumptions and be a pompous jerk about it.

We then headed over to the other section and tried out Sonic Mania. I’ve mentioned before that Sonic is super important to me and while I love the 3D games more than the 2D ones, Sonic Mania was still really enjoyable. I played Tails so I mostly did nothing, but it was still pretty fun regardless.

Splatoon 2 was up next and I was super nervous as the gyro controls were on. We used pro-controllers, but I just do not do well with gyroscopes. Despite that, our first match I actually did the best with the most ink… well, inked, 8 kills, and 0 deaths. I did pretty well the second time too and both times our team won. I’m not sure how I feel on the new Roller special (the Super Jump Smash), but I still had fun. I’m definitely more interested in the story mode if anything, but I will probably pick this up in the Summer.

We decided to play Fast RMX next and I actually have never played an F-Zero Game so this was pretty new for me. My husband managed to get first place in our first race while I got third, but in our second race I got first and he got third. It was a really fun time and I think I actually had more fun with it than I did with Mario Kart. I think Mario Kart just had me permanently down due to the customization-stat things which I didn’t feel were in effect as much with Fast RMX.

The final game we played was ARMS. It’s pretty fun and I won each of the matches we did. I still don’t know if it’s my kind of game though. I feel like if someone asked, I’d play, but it’s not something I’d really pick up for myself to play as I’m just not super big into fighting games (even if I’m not that bad at them). It’s definitely a neat game though and I think it has a lot of potential so I’ll probably at least keep an eye on it.

When we left, we were given a cookie and a pin. Even though it wasn’t as much as the goodie bag we got at the Wii U event, it was still a nice surprise. 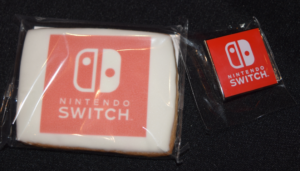 Overall thoughts: The Switch is really fun. I found the controllers easy to hold and lightweight, the games enjoyable, and just generally had a good time. All the Nintendo reps were great and time flew by even when we were just relaxing a bit. I would say the only negatives I can think of are my hand cramping a bit during Mario Kart and the Street Fighter issue I mentioned above (which has nothing against the game or system which were both fine). It was a great event and I’m so happy I got the opportunity to go. I’m so excited for March.